By collecting images and GPS data from citizen divers, scientists can get a better sense of the health of the entire Great Barrier Reef.
(Damian Bennett)

From Smithsonian by Jessica Wynne Lockart

Only about 1,000 of 3,000 individual reefs have been documented, but the Great Reef Census hopes to fill in the gaps

In August, marine biologists Johnny Gaskell and Peter Mumby and a team of researchers boarded a boat headed into unknown waters off the coasts of Australia.
For 14 long hours, they ploughed over 200 nautical miles, a Google Maps cache as their only guide.
Just before dawn, they arrived at their destination of a previously uncharted blue hole—a cavernous opening descending through the seafloor. 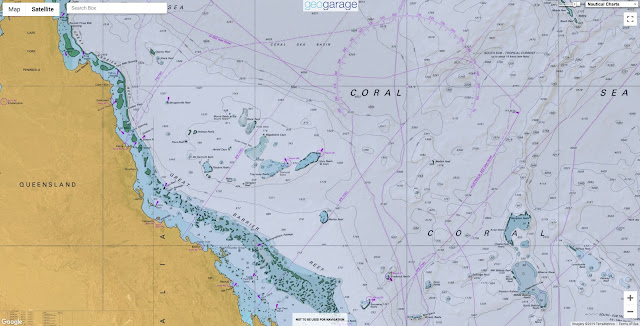 After the rough night, Mumby was rewarded with something he hadn’t seen in his 30-year career.
The reef surrounding the blue hole had nearly 100 percent healthy coral cover.
Such a find is rare in the Great Barrier Reef, where coral bleaching events in 2016 and 2017 led to headlines proclaiming the reef “dead.”
“It made me think, ‘this is the story that people need to hear,’” Mumby says.

The expedition from Daydream Island off the coast of Queensland was a pilot program to test the methodology for the Great Reef Census, a citizen science project headed by Andy Ridley, founder of the annual conservation event Earth Hour.
His latest organization, Citizens of the Great Barrier Reef, has set the ambitious goal of surveying the entire 1,400-mile-long reef system in 2020.
“We’re trying to gain a broader understanding on the status of the reef—what’s been damaged, where the high value corals are, what’s recovering and what’s not,” Ridley says.

High resolution bathymetry data trove released
Araft of detailed new bathymetry datasets have been published on the AusSeabed Marine Discovery Portal.
While considered one of the best managed reef systems in the world, much of the Great Barrier Reef remains un-surveyed, mainly owing to its sheer size.
Currently, data (much of it outdated) only exists on about 1,000 of the Great Barrier’s estimated 3,000 individual reefs, while a mere 100 reefs are actively monitored.

Researchers instead rely on models, which has left gaps in knowledge.
In the last two years, our understanding of how ocean currents dictate the reef’s ability to survive has improved.
According to Mumby, spawn from as few as three percent of sites provides new life to over half of the reef.
Those key reefs, however, still need to be identified.
“You can’t prevent bleaching or cyclones, but you can protect critically important sources of larvae,” he says.
An accurate survey will help to manage coral-hungry Crown-of-thorns starfish, as well inform future restoration project sites.

The majority of individual reefs that make up the Great Barrier Reef have not been directly surveyed.
(Damian Bennett)

The Great Reef Census is not the first attempt to use citizen science to survey the reef.
One such program, Reef Check, has been relying on citizens for 18 years—but it only monitors 40 key sites.
Eye on the Reef, an app from the Great Barrier Reef Marine Park Authority, encourages users to upload significant sightings, such as bleaching events, Crown-of-thorns starfish and mass spawning events.
But the new census will mark the first attempt to survey the entire reef system.

But the ambitious research program hinges on laypeople, meaning the data gathered could be of questionable scientific value.
Citizen science is notoriously problematic, owing to deviations from standard procedures and biases in recording.
For example, contributors to Eye on the Reef are more likely to record the spectacular (whale sharks, dugongs and humpback whales) than the common (starfish).

In 1992, Mumby’s first research project was analyzing reef survey data from citizen scientists in Belize.
The results, he admits, were less than brilliant.
“There are many citizen programs where the pathway between the data collected and the actual usage by management can be somewhat opaque,” he says.

Yet, Mumby believes that the Great Barrier Reef Census is different.
The program has a clear connection to both research and policy, he says.
Unlike other citizen science efforts, unskilled volunteers won’t be asked to estimate or monitor coral cover.
Participants will do the most simplistic of grunt work: uploading 10 representative photos of their diving or snorkelling site with a corresponding GPS tag.
This basic field data will then be used by the University of Queensland, which is already using high-resolution satellite images and geomorphic modelling to map the reef and predict the types of local ecosystems present.

National Oceanic and Atmospheric Administration diver Kelly Gleason injects a crown-of-thorns starfish with with ox bile, a natural substance that kills the creature but does not harm the reef.
(Greg McFall, NOAA Dive Program)

The project is critically important to understanding the reef, but it comes with limitations, says David Kline, a coral reef ecologist at the Smithsonian Tropical Research Institute.
According to Kline, satellite imaging is only capable of penetrating to depths of about 5 meters, although some satellite mapping has achieved about 20 meters in ideal conditions.
This leaves the deep-water mesotrophic reefs—which are less likely to suffer from bleaching and may be critical for reef recovery—under-studied.
Some are located as deep as to 2,000 meters underwater.
“To really [survey] the entire Great Barrier Reef in a meaningful way, you need AUVs [autonomous underwater vehicles], drones, airplanes with multi-spectral imagery, and high-resolution satellites—and you need to be able to link the data between these different levels,” Kline says.

Kline is currently working with the University of Sydney’s Australian Centre for Field Robotics, where engineers are training AUVs to gather high-resolution imagery of the reefs, including mesotrophic reefs.
This information can then be used to train machine learning algorithms to map the entire system.

However, Kline says it will likely be another 5 to 10 years before a fleet of AUVs is ready to efficiently map large areas such as the Great Barrier Reef.
“Until then, we need ambitious projects to start making progress toward that goal,” he says.
The Great Barrier Reef Census and the satellite mapping from the University of Queensland is a good start.

But even if the census’s methodology leads to stronger scientific data than previous efforts, the reef’s prognosis is still bleak.
If global greenhouse emissions continue to rise at their current rate, it’s predicted that mass bleaching events, which have occurred four times in the past 20 years, will occur annually from 2044 onward.

If successful, the Great Barrier Reef Census will be the world’s largest collaborative scientific survey.
And Ridley thinks if reports of the reef’s alleged death didn’t propel people to action, maybe reports of its ability to survive in the face of adversity will.

“We want the citizens to be helpful from a science perspective—but we also want people to give a shit,” Ridley says.
“The world’s not moving fast enough toward net-zero emissions.
Can the Great Barrier Reef be a point of inspiration, rather than a point of doom? I don’t know.
But we’re giving it a bloody shot.”