Great Barrier Reef has lost half its corals since 1985, new study says

Australia’s Great Barrier Reef has lost more than half its coral cover since 1985, according to a new study published Monday. The loss has been spurred by a combination of factors including hurricanes, coral-eating starfish and coral bleaching. The paper, in the Proceedings of the National Academy of Sciences, is the most comprehensive survey of a reef system over such a long period.
The researchers from the Australian Institute of Marine Science found that reef cover fell from 28 percent to 13.8 percent over the past 27 years, with two-thirds of the decline occurring since 1998. 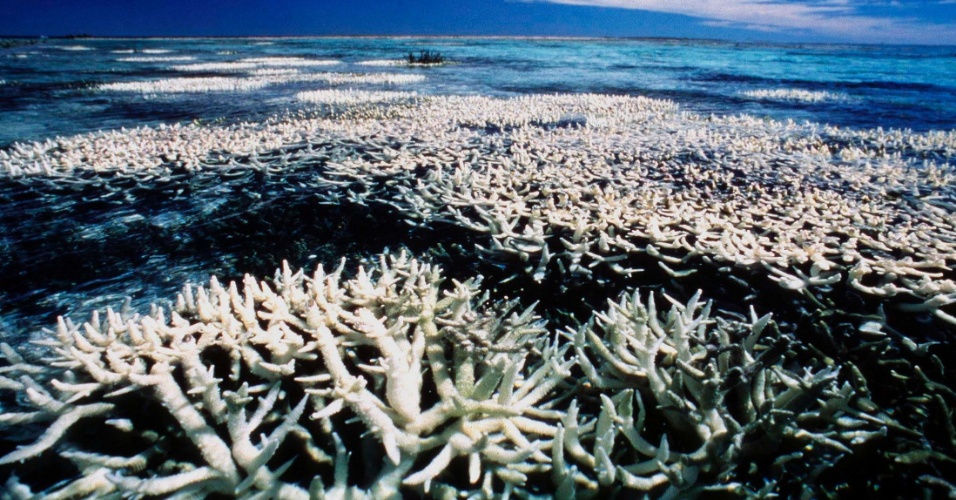 Coral on Australia's Great Barrier Reef can be seen suffering from bleaching in this file handout photo.
Image by: HANDOUT / Reuters

The sobering findings highlighted how even the world’s most protected marine areas are under assault from natural forces and causes linked to the human activity that is resulting in climate change.
The Great Barrier Reef is the world’s largest coral reef ecosystem, featuring nearly 3,000 individual reefs within 133,205 square miles.
A third of the Great Barrier Reef Marine Park is off-limits to fishing and collecting.

“We are basically losing an ecosystem that is so iconic for Australia and the rest of the world,” said institute scientist Katharina E. Fabricius, one of the paper’s authors.

The population outbreak of the coral eating starfish Acanthaster planci on the Great Barrier Reef is seen in this undated handout photo released on October 2.
The world's largest coral reef - under threat from Australia's surging coal and gas shipments, climate change and a destructive starfish - is declining faster than ever and coral cover could fall to just 5 percent in the next decade, a study shows.
Katharina Fabricius/Australian Institute of Marine Science/Reuters

Researchers warned that Australian officials will have to step up efforts to curb controllable threats, such as coral-eating starfish, because they are easier to target than intense storms and rising ocean temperatures.

John Gunn, chief executive of the Australian Institute of Marine Science, said scientists need to learn about the periodic population explosions of crown-of-thorns starfish, a native pest.
“The study shows that in the absence of crown-of-thorns, coral cover would increase at 0.89 percent per year, so even with losses due to cyclones and bleaching there should be slow recovery,” Gunn said in a statement.
Nutrient runoff appears to be fueling the crown-of-thorns starfish boom: The authors note that these outbreaks occurred once in every 50 to 80 years before European agricultural runoff began.
They now average once every 15 years.

Crown-of-thorns starfish can have a significant impact on the Great Barrier Reef. AIMS conducts a long-term monitoring program aimed at tracking the number and distribution of these animals.

Nancy Knowlton, a coral reef biologist at the Smithsonian Institution National Museum of Natural History, said the finding will be “a shock to the system” that could force Australians to focus on improving their water quality.
“If anyone’s going to do it, it’s going to be the Australians, because they really care about the Great Barrier Reef,” she said in an interview.
She added that these measures will “buy you real time but not infinite time,” at which point countries will have to cut the carbon emissions that are raising sea temperatures and making the ocean more acidic.

At a conference on ocean acidification in Monterey, Calif., last week, Fabricius told reporters that tourists often get a distorted view of the reef because they visit the more pristine areas.

“But if you’re a research vessel and you go to the areas which are not prescribed, you see a very different picture,” she said, adding that corals will face an even greater challenge in the years ahead because carbon emissions are lowering the water’s pH. That, in turn, makes it harder for corals to form their skeletons.

At the current rate of loss, researchers said, the Great Barrier Reef will lose half of its coral cover again by 2022, putting it on par with the Caribbean.
“It will be really very low in 10 to 15 years,” Fabricius said.