Image of the week : shoal of sardines in shape of dolphin 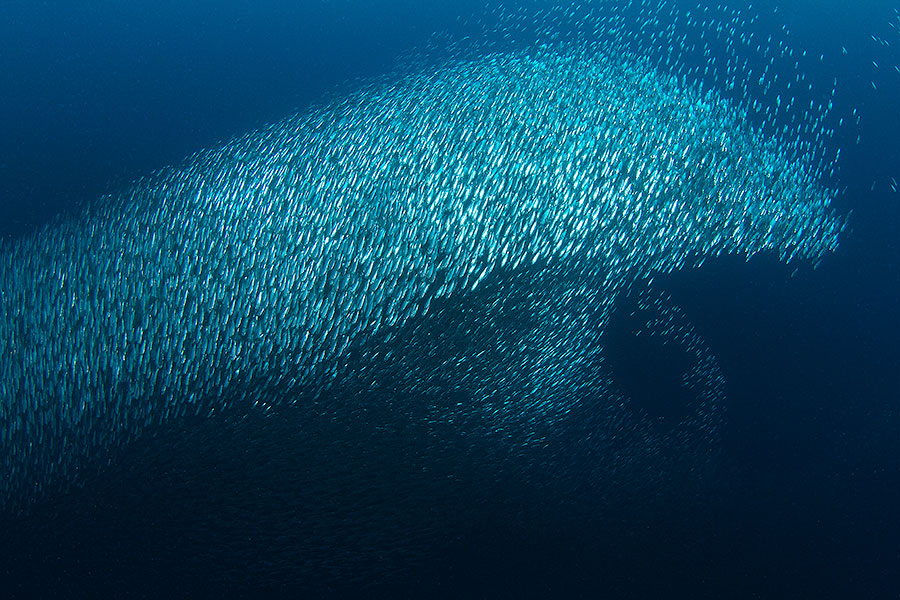 See the seafloor like never before on World Oceans Day

Only a tiny fraction of our oceans have ever been explored.
As a matter of fact, we know more about the surfaces of Mars and the Moon than we do about our own ocean floor.
So in honor of World Oceans Day, Google collaborated with Columbia University to add more ocean seafloor terrain to Google Earth than has ever been available before.
With the addition of Columbia’s Global Multi-Resolution Topography (GMRT) synthesis data, you can explore half the ocean area that has ever been mapped, an area larger than North America.

Google partners at the Lamont-Doherty Earth Observatory at Columbia have curated 20 years of data from almost 500 ship cruises and 12 different institutions.
See the full GMRT attribution layer in the Earth Gallery to learn more.
High-res underwater mapping is vital to understanding how tsunamis will spread around the globe.
For example, the National Oceanographic and Atmospheric Administration (NOAA) created a Tsunami spread map after the Japan earthquake to allow anyone to visualize the wave spread.

To get started, dive under the ocean surface by clicking any ocean in Google Earth and explore underwater volcanoes, trenches and sea mountain peaks.
You can also download this Seafloor updates kmz file to take a tour of the new high-resolution data.

2011 Seafloor Tour video highlights some of the amazing places you’ll find in Google Earth, like the Mendocino Ridge, where the massive Juan de Fuca Plate slides toward western North America.

Continue exploring with the Deep Sea Vents Ridge 2000 Google Earth tour, which includes the deepest volcanic eruption ever captured on video at the West Mata volcano, near Fiji.
Twenty additional ocean education posts from Ridge 2000 can be found in the Explore the Ocean layer in Google Earth.

Complete your tour, by checking out the recently published University of Hawaii at Manoa's 50-meter seafloor synthesis for the US Hawaiian islands and California State University Monterey Bay’s new data for Cordell Bank and the Gulf of the Farallones off the west coast of California.

Hoping this new high-res terrain data inspires you to dive into the unknown world that is the ocean and discover the many underwater treasures that lie beneath.

The old man and the sea

The old man and the sea from Osman ÖZ

Cristina Zenato can put reef sharks into tonic immobility by stroking them on the nose.
From CristinaZenato website

Born in Italy, Cristina Zenato grew up in the rain forests of 1970’s African Congo until the age of 15, and naturally developed a love of the outdoors.
Her tremendous passion for the ocean surfaced at a young age, and following her love for the water she journeyed to the Bahamas for work, and learned to dive..

16 years later she is still proudly working for The Underwater Explorers Society, and from her humble beginnings as a Scuba Instructor, she climbed the ladder to become the head of diving at UNEXSO, teaching technical diving plus cave and cavern classes.
When Cristina is not working, she can usually be found freediving or exploring new cave systems.

Cristina’s love of exploration and caving is inspiring, yet it pales when it comes to Sharks. Cristina has a natural ‘gift’, some would say, with Sharks.
Practicing a little known technique of rubbing and manipulating her fingers across the ampullae of Lorenzini, the visible dots [electro-receptive sensory organs] all around a shark’s head and face, she induces a tonic immobility.
To the observer, this looks like a shark falling asleep right in her lap.
Last fall a Blue shark appeared to fall asleep in her hands, on the surface.
As she caressed the beautiful ten foot ocean traveler, the fact that she had no chain-mail suit on this occasion never seemed to cross her mind.

Her ability to work with several types of shark in this manner has allowed her to study up close, in the wild, with no stress from the usual hooks, gaffs, and undue pain some shark researchers have used to gather data.
In fact the sharks at her home in the Bahamas almost seem to know her for her gentle spirit, and warm to her touch.
Guests are on occasion, encouraged to feel the shark’s skin while in this calm state.
This in turn gives visiting divers on the Shark Dive at UNEXSO the chance to dissolve any misconceptions or preconceptions they may have had about shark life.
She teaches divers who are interested, to feed the local Caribbean Reef sharks by hand, hoping to bring people closer to understanding the secret world of these creatures.

First learning to feed sharks with her mentor [the legendary Ben Rose] Cristina has researched shark behavior, and comparison and change in sharks.
From the Bimini Shark Lab, South Africa, North Carolina, Florida and Mexico, Cristina writes a few short stories and reports for newsletters about sharks, [and also cave diving and training] having observed the behaviors of Tigers, Great Whites, Lemons, Reefs, and Bulls.
She has further developed her practice of tonic immobility, to remove hooks from shark’s mouths, to remove parasites, and for her Awareness Campaign against shark finning and capture, for shark protection, and human education.

Naturally, all this talent sparked up the attention of filmmakers, documentary and TV producers worldwide, and as you might imagine, the list of film and TV work Cristina has achieved is immense.
Just a few on the TV list are BBC, Discovery, Nat Geo, ABC, Science and Nature programs all over Europe and the USA.
Films include Der See Wulf, Shark Water, Shark Man, Oceans, including non-profits like Gimme-A-Hug / Protect the Sharks Foundation.

Involved in magazines like, Skin Diver, Sport Diver, Advance Diver Magazine and also working on calendars to fund shark awareness, the list goes on.
Needless to say, on her home island of Grand Bahama, Cristina works closely with the National Trust, and has been awarded the rights/permit to dive the guarded Ben’s Cave, further forging a conservation alliance with them to re-draw the map of Ben’s, aiding to protect the delicate cave system.

Look for her in the next shark program you watch, she might well be lurking next to the lens negotiating with the shark to not worry about these odd people staring at them..
A sense of who Cristina Zenato is can only truly be felt underwater.
There, she is more at home than she is on land, and an apt quote by Jacques Cousteau says it all:
“From birth, man carries the weight of gravity on his shoulders. He is bolted to earth. But man has only to sink beneath the surface and he is free.”
Posted by Peio at 1:58 AM No comments:

Source OurAmazingPlanet.com
Exploring the wonder and beauty of planet Earth
through exclusive news, features and images.

Source EarthPeriodical, Ocean Depth infographic
Posted by Peio at 1:41 AM No comments:

Individual details of nautical navigational charts have been animated to visualise the spoken word of the shipping forecast.
Structured around the five aspects of the forecast, the animation is a visual response to what is being said: Location, wind direction, wind speed, precipitation and visibility.
Posted by Peio at 1:13 AM No comments: