Image of the day : Galapagos lagoon

Photograph by Bobby Haas (National Geographic)
As startling as a bright-blue eye, a central lagoon peers out from Rocas Baimbridge off the Coast of Santiago Island in Ecuador's Galápagos Islands.

>>> geolocalization with the Marine GeoGarage <<<
The stark, rocky island teems with life at times—the brackish lagoon waters are favored by flamingos.
Posted by Peio at 1:27 AM No comments:

Watch this short video from BBC natural history series Blue Planet to see the mating habits of amazing colour changing squid and the weird movements of the aptly named hand fish.
Posted by Peio at 1:42 AM No comments: 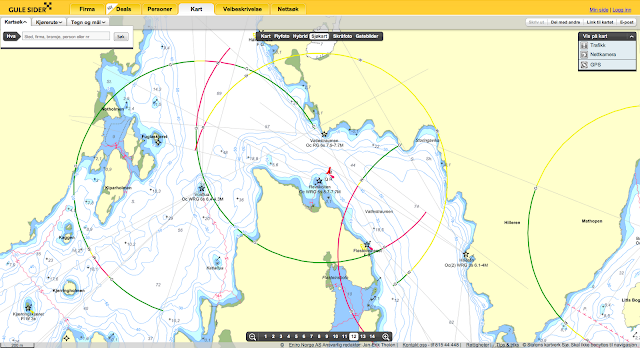 The Appeals Selection Committee of the Supreme Court in Norway has unanimously rejected the appeal which was filed when the State of Norway was earlier this year acquitted of the original NOK580 million claims of damages made after the Rocknes accident in 2004.

Eighteen seafarers lost their lives and a large amount of oil was spilt along the Norwegian coastline when M/V Rocknes hit a shoal in the narrow Vatlestraumen passage near Bergen, Norway, on 19th January 2004.
Cleaning costs amounted to more than NOK120 million.

Rocknes vessel pulled upright from its upside down position 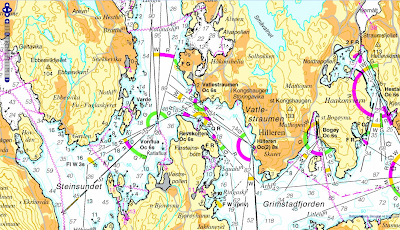 The reason for not publishing the shoal of 9.4 metre was its proximity to the existing danger line in Norwegian Chart number 21 from 1941, in addition to its location within the red sector of Hilleren lighthouse.
The new chart number 21, with 10 meter depth contour lines instead of danger lines, was published and distributed in 2003.

In January 2011, the verdict was overturned by the Court of Appeal, which stated that the accident was most likely caused by navigational error by the ship's crew.

To sail a ship the size of Rocknes through this narrow passage is demanding under normal conditions.
Limited visibility from the navigation bridge of the ship, strong currents and stability problems made for an even more demanding situation and therefore required very thorough planning and monitoring.
The Court of Appeal clearly stated that the responsibility for safe navigation always lies with the ship's captain and navigator, and not with the mapping agency that provides quality-assured nautical charts.

The shipping company and several insurance companies appealed the case, but now the Appeals Selection Committee of the Supreme Court has ruled that the verdict from the Court of Appeal stands.
This outcome finalises a 7,5 year long judicial process that has demanded enormous resources from the Norwegian Hydrographic Service.
"Though we shall never forget that eighteen lives were lost at sea, we are relieved to have this final verdict", says director of the Norwegian Hydrographic Service, Evert Flier.
Links :

Huge waterspout -- tornadoes formed over water -- caught on cam
The aerial videos seen below were filmed from a helicopter by Australia's Channel 7,
which claimed that they reached heights of nearly 2,000 feet.
Australia's Channel Seven captured multiple, powerful waterspouts from a helicopter about 55 miles northeast of Sydney.
They claim the spouts reached heights of nearly 2,000 feet, but dissipated as they neared land.
A spectacular waterspout appears off the east coast of Australia, creating a twisting pillar of water hundreds of metres high.
A waterspout appeared off the central coast of Australia's New South Wales coast as extreme weather hammered down on other parts of the region on Monday causing a huge sprouting fountain in the middle of the ocean.
A heavy storm across the coast, north of Sydney resulted in three additional waterspouts, according to local residents.

Waterspouts are formed when a high layer of cold air blows across a body of water, either the ocean, a lake or a river and clashes with the warm air below.
Inside the spout, winds can reach speeds of up to 62.1 miles an hour.
They have also been known to pick up various sea-life and dump it on land.
Like land tornadoes, waterspouts often appear in groups.
Posted by Peio at 1:29 AM No comments: 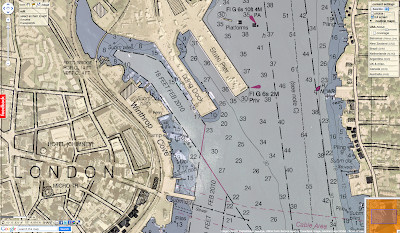 Today 1019 NOAA raster charts (2166 including sub-charts) are included in the Marine GeoGarage viewer.
Note : NOAA updates their nautical charts with corrections published in:
While information provided by this Web site is intended to provide updated nautical charts, it must not be used as a substitute for the United States Coast Guard, National Geospatial-Intelligence Agency, or Canadian Coast Guard Notice to Mariner publications 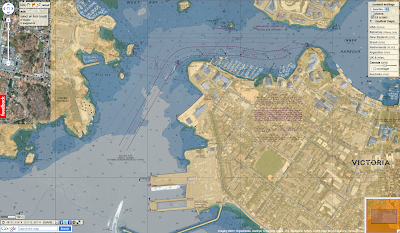 So 694 charts (1650 including sub-charts) are available in the Canada CHS layer. (see coverage)

Note : don't forget to visit 'Notices to Mariners' published monthly and available from the Canadian Coast Guard both online or through a free hardcopy subscription service.
This essential publication provides the latest information on changes to the aids to navigation system, as well as updates from CHS regarding CHS charts and publications.
See also written Notices to Shipping and Navarea warnings : NOTSHIP
Posted by Peio at 3:22 PM No comments:

Some people understand the seas in a way modern science cannot comprehend.
Yet this understanding has stemmed from extreme isolation and the ability of communities to exist on even the smallest land masses and to harvest bounty that can be seen below the waves or beyond the horizon.

On the island of Lembata in Indonesia the fishermen of Lamalera continue to hunt 75ft sperm whales by leaping from their boats onto the whale's back armed only with a harpoon.
It's fraught with danger, a real Moby Dick scenario, but a single whale provides for the whole village.

A speck in the Pacific Ocean, Anuta is less than half a mile wide and over 70 miles from its nearest neighbour.
Fish and yams make up the people's diet, but once or twice a year when the trade winds change direction they sail across treacherous seas to reach the rocky island of Fatutaka, where hundreds of sea birds are harvested.
Special, sacred outriggers are used for this journey, and the birds are captured using a traditional long pole and noose.
For the fishermen isolated in this ocean the risk to life and limb is very real.

Findings from a "natural laboratory" in seas off Papua New Guinea suggest that acidifying oceans will severely hit coral reefs by the end of the century.

Carbon dioxide bubbles into the water from the slopes of a dormant volcano here, making it slightly more acidic.
Coral is badly affected, not growing at all in the most CO2-rich zone.

The oceans absorb some of the carbon dioxide that human activities are putting into the atmosphere.
This is turning seawater around the world slightly more acidic - or slightly less alkaline.
This reduces the capacity of corals and other marine animals to form hard structures such as shells.
Projections of rising greenhouse gas emissions suggest the process will go further, and accelerate.

"This is the most realistic experiment done to date on this issue," said Chris Langdon, a coral specialist from the Rosenstiel School of Marine and Atmospheric Science in Miami, US.
"So I don't have any qualms about believing that what we found will apply in other parts of the world."

The water becomes progressively more acidic closer to the vents that are bubbling CO2.
This allows the researchers to study the impacts on coral at different levels of acidity.

Seawater has an average pH of about 8.1; this is already about 0.1 lower than before the industrial age and the large-scale human emissions of greenhouse gases associated with it.
The Intergovernmental Panel on Climate Change (IPCC) projects that by the end of the century, emissions may have risen so much that pH may fall to 7.8.
In the Papua New Guinea site, few types of coral grew at pH7.8.

Reefs still formed, but were dominated by one particular type, the Porites, which form massive shapes largely devoid of the branches and fronds that characterise reefs rich in species.
"We saw only a few speces of coral, and none of the structually complex ones that provide a lot of cover for fish," Professor Langdon told BBC News..

"The much simpler forms support many fewer species, and theory suggests they create an environment that would be very vulnerable to other stresses."

In an even more acid part of the study site, with a pH of 7.7, the scientists report that "reef development ceased".
Here, seagrasses dominate the floor - but they lack the hard-shelled snails that normally live on their fronds.

This is the second published study of a "natural lab" for ocean acidification.

The first, from a site in Mediterranean, found snails with their shells disintegrating; but the PNG site offers a snapshot of the future that might be more applicable to the world's tropical coral hotspots.
"The results are complex, but their implications chilling," commented Alex Rogers from the University of Oxford, who was not part of the study team.
"Some may see this as a comforting study in that coral cover is maintained, but this is a false perception; the levels of seawater pH associated with a 4C warming completely change the face of reefs.
"We will see the collapse of many reefs long before the end of the century."

The scientific team behind the new research, drawn from Australia, Germany and the US, suggests that the picture from PNG may underplay the threat.
Reefs in the acidic zones of the study site receive regular doses of larvae floating in from nearby healthy corals, replenishing damaged stocks.

This would not be the case if low pH levels pertained throughout the oceans.

In addition, corals at the site are only minimally affected by other threats; there is little fishing, local pollution, or disease.
By contrast, a major survey published earlier this year found that three-quarters of the world's reefs were at risk - 95% in southeast Asia - with exploitative and destructive fishing being the biggest immediate threat. 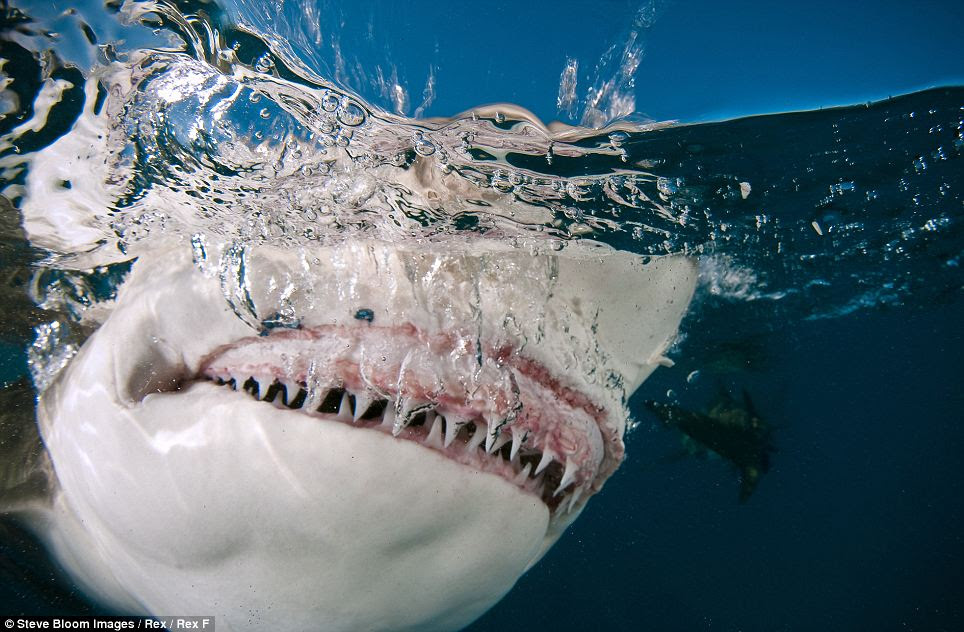 Our oceans are thriving with a veritable cornucopia of life - much of which is rarely, if ever, seen.
It is believed that between 50 and 80 per cent of all life on earth is found hidden under the surface of these bodies of water.
Our oceans contain 99 per cent of the living space on the planet and less than 10 per cent of this vast expanse has been explored by humans. 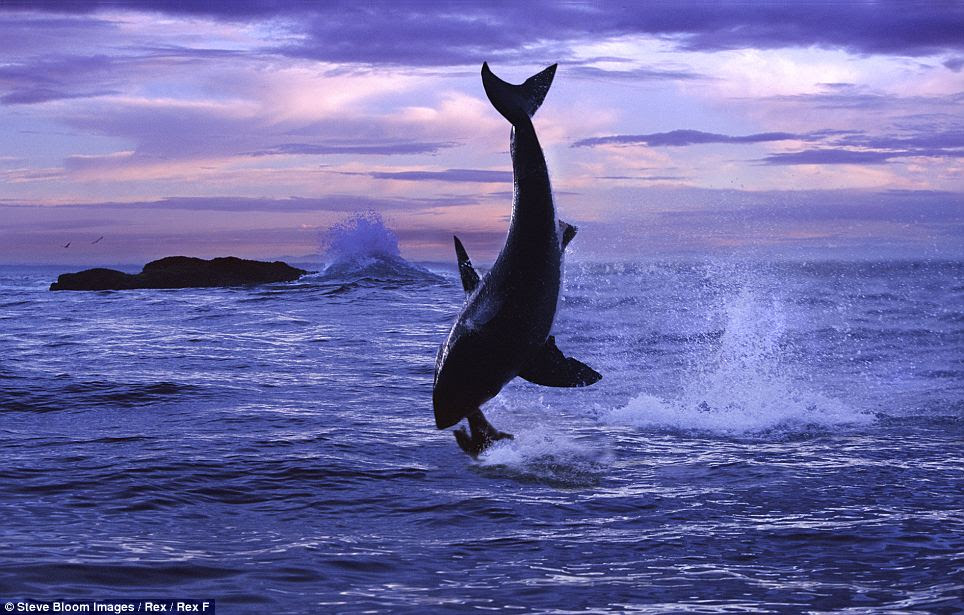 A great white shark hunting seal in South Africa
'Into the Deep', presented by Steve Bloom Images, celebrates the startling variety of life found in the world's oceans and sheds some light on the weird and wonderful creatures who thrive in this mysterious abyss (see gallery). 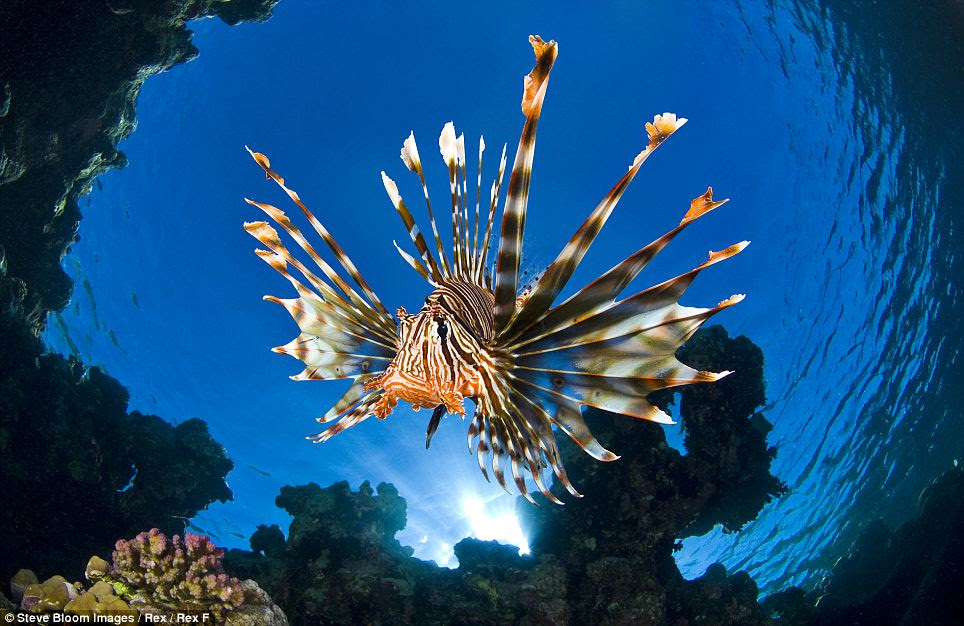 A lionfish (Pterois volitans) gently coasting along in Egypt's Red Sea
Everything from the denizens of the deep who never see light of day, to the strange sealife that populates the wider ocean is seen in this serie of pictures.
The images start at the surface of the ocean and travel downwards - capturing what goes on beneath the waves and away from our view.