From The Telegraph by Steve Bird and Helena Horton

A super trawler 14 times the size of UK fishing boats is plundering thousands of tonnes of fish from British waters before Brexit, when the Government will be able to kick the vessel out.

The 6,200 tonne Lithuanian-registered Margiris vessel was boarded by Government officials on Wednesday and found to be operating legally under European laws.

However, environmentalists fear it could be endangering short beaked common dolphins and bluefin tuna.
The ship - described as a vast floating fishing factory which can net and process 250 tonnes of fish each day - has been the target of a series of campaigns culminating in it being banned from Australian waters in 2013.

On Friday night it was 14 miles off the Sussex coastline having spent one week fishing in British waters. While it is fishing mackerel to be sold to Africa, it is believed to be operating in breedings waters for sea bass, which is already overfished.
The ship, which is 465ft long with a net 1,950ft in length and 650ft wide, dwarfs most UK fishing boats. 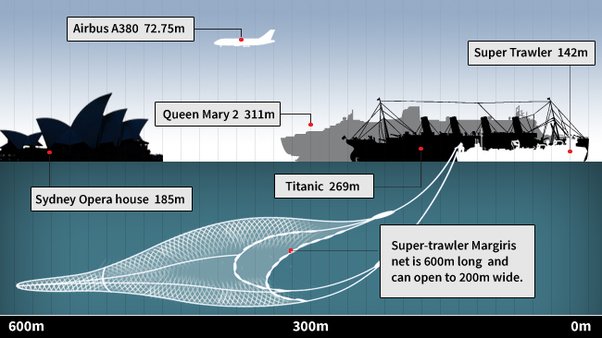 Under the common fisheries policy set out by the European Commission, each EU country is given a quota of fish it can catch in European waters.
Each country then divides that quota between vessels, allocating set catch sizes along with documentation in the event of an inspection.
A spokesman for the Marine Management Organisation, the government agency responsible for enforcing fishing regulations in UK waters, said it boarded the boat on Wednesday, adding: “No infringements of fishing regulations were found.”

The Margiris, part of a larger ‘freezer fleet’, is owned by the Dutch company Parlevliet & Van der Plas which has 6,000 employees and offices around the world.
A company spokesman said it was behaving perfectly legally in “European waters”, denied its fishing techniques threatened endangered species and had trawled in the area for the last 30 years.
He added: “We fish until Brexit has happened - God knows when that is. But, we always respect the law.”

In the event of Britain leaving the European Union, the UK will have greater control over fishing in its waters.
A government source said: “On October 31 we will become an independent coastal state. This means that for the first time in more than 40 years, we will be able to decide who can fish in our waters and on what terms.”
She added those new powers will apply 200 nautical miles off the British coast, or the median line between our shores and those of any neighbouring country.
“Any access to UK waters will be a matter for negotiation,” she said.

Greenpeace protesters say they confronted the Margiris - previously known as Abel Tasman - in West Africa in March 2012 and in the Netherlands and Australia in 2013.
Its application to fish in Australian waters was rejected.

Chris Thorne, an oceans campaigner at Greenpeace, said: “Super trawlers are floating fish factories that can process hundreds of tonnes of fish every day.
“They are responsible for much of the over exploitation of our oceans that is decimating fish stocks, destroying marine ecosystems and ruining the livelihoods of inshore fishermen who fish sustainably and are the backbone of many coastal communities.”

A spokesman for the Blue Planet Society said super trawlers have the equivalent capacity of a dozen small-scale fishing vessels.
"Local, smaller fishing boats have to return to port to offload the fish prior to processing.
"We think the super trawler Margiris is targeting horse mackerel and pilchards off Sussex. This will put them in contact with short-beaked common dolphins, endangered bluefin tuna and overfished sea bass."

A European Commission official said: “The Commission is aware of concerns among non-governmental organisations concerning the activity of large trawlers.
“All vessels operating in EU waters, large and small, have to abide by the rules and this is controlled by the Member States' inspection and control services. It is a priority that all Union vessels comply with the legislation in force.”
He added that the Commission requires “concrete facts” regarding any “suspicion” a vessels infringes fishing rules.