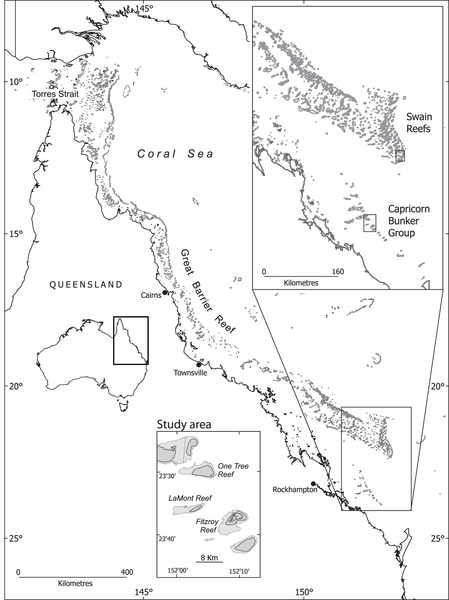 Location of One tree Island.
One Tree reef (OTI, 23°30′S, 152°06′E) is one of fourteen reefs in the Capricorn Bunker Group in the southern Great Barrier Reef, Australia.
OTI is situated 90 km from the Queensland coast and 5–10 km southeast of neighboring reefs Heron and Sykes.

Reef fish sustain populations on isolated reefs and show genetic diversity between nearby reefs even though larvae of many species are swept away from the natal site during pelagic dispersal.
Retention or recruitment to natal reefs requires orientation capabilities that enable larvae to find their way.

Although olfactory and acoustically based orientation has been implicated in homing when larvae are in the reef’s vicinity, it is still unclear how they cope with greater distances.
Here we show evidence for a sun compass mechanism that can bring the larvae to the vicinity of their natal reef. 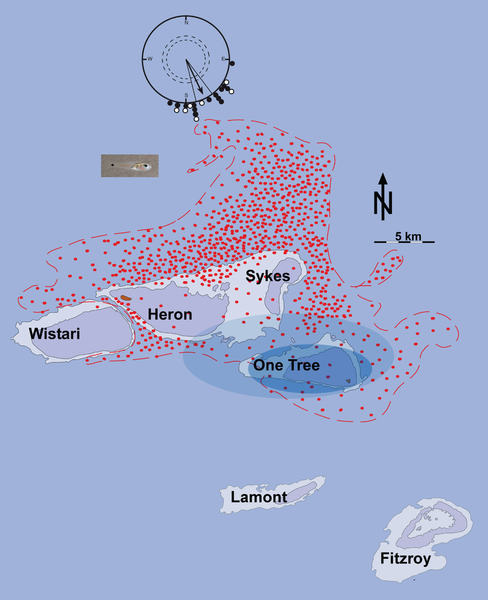 Model illustrating how a time-compensated sun compass could help passively drifted reef fish larvae to relocate their natal OTI reef.
Red dots indicate the locations at ebb tide of passively dispersed particles 8 days after release from One Tree Reef according to the dispersal experiments and model calculations
At flood tide the dots will be displaced 5–7 km WNW.
Notice that most larvae considered as passive particles for their first 8 days would be transported significantly to the NNW beyond the odor halo of OTI (idealized odor halos in decreasing intensity blue) and even beyond neighboring reefs to the NNW before they gain sustained swimming capabilities.
The polar diagram shows the time-compensated sun compass orientation of just-settled (•) and pre-settlement (o) larvae
One-week old O. doederleini larvae (symbolized by the dispersed cloud of red dots) would be more likely to relocate the OTI reef if they used a sun compass to swim actively toward SSE, than if they would swim in random directions.

When fish were clock-shifted 6 hours, they changed their orientation by ca. 180° as predicted by the tropical sun curve at One Tree Island, i.e. they used a time-compensated sun compass.
Furthermore, the fish oriented most consistently at times of the day when the sun azimuth is easy to determine. Microsatellite markers showed that the larvae that had just arrived at One Tree Island genetically belonged to either the local reef population or to Fitzroy Reef located 12 kilometers to the SSE.
The use of a sun compass adds a missing long-distance link to the hierarchy of other sensory abilities that can direct larvae to the region of origin, including their natal reef.
Predominant local recruitment, in turn, can contribute to genetic isolation and potential speciation.
Posted by Peio at 1:33 AM