Roman-era anchor found at windfarm on display in Ipswich

An "incredibly rare" wrought iron anchor thought to be up 2,000 years old is going on display for one day after being found at an offshore windfarm.
The anchor, believed to be Roman or late Iron Age, was found off the Suffolk coast in 2018 during survey work on the East Anglia One windfarm. 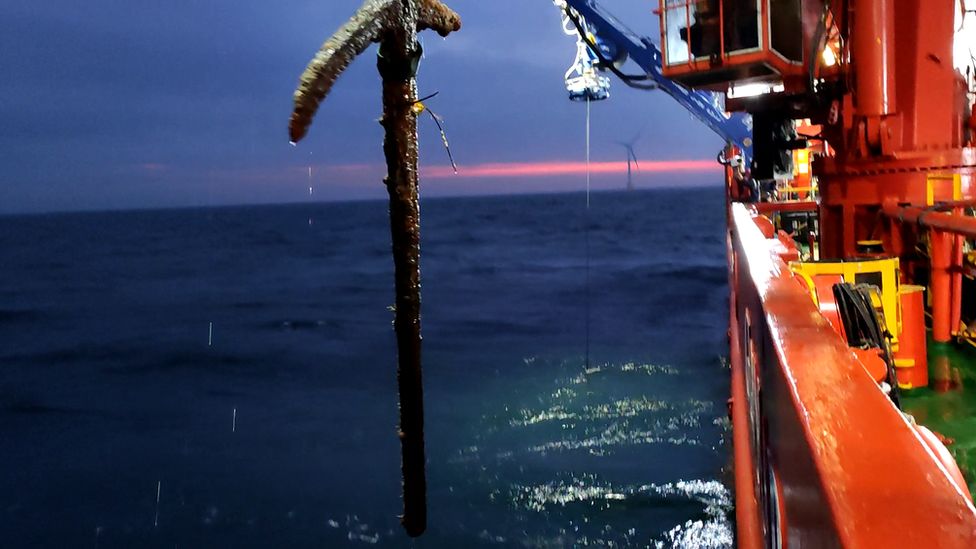 It will be on show for the first time at Ipswich Museum on Tuesday, before being moved for further analysis work.
Experts said it was an "incredibly rare, distinctive" anchor.
It was thought to have come from a 500-600 tonne vessel and was believed to be between 2,000 and 1,600 years old.
The anchor was found in 2018 and removed from the sea last year
"Everything points to this being a Roman anchor of almost 2,000 years old; if this is confirmed it would be hard to overstate its significance," said Brandon Mason from Maritime Archaeology Ltd.
"We only know about three pre-Viking anchors from northern European waters outside the Mediterranean region, and only two actually survived.
"We believe this find could be the oldest and one of the largest surviving examples, giving us hard evidence of the incredible amount of activity that must have been going on in the waters in Roman times, but that we know relatively little about." 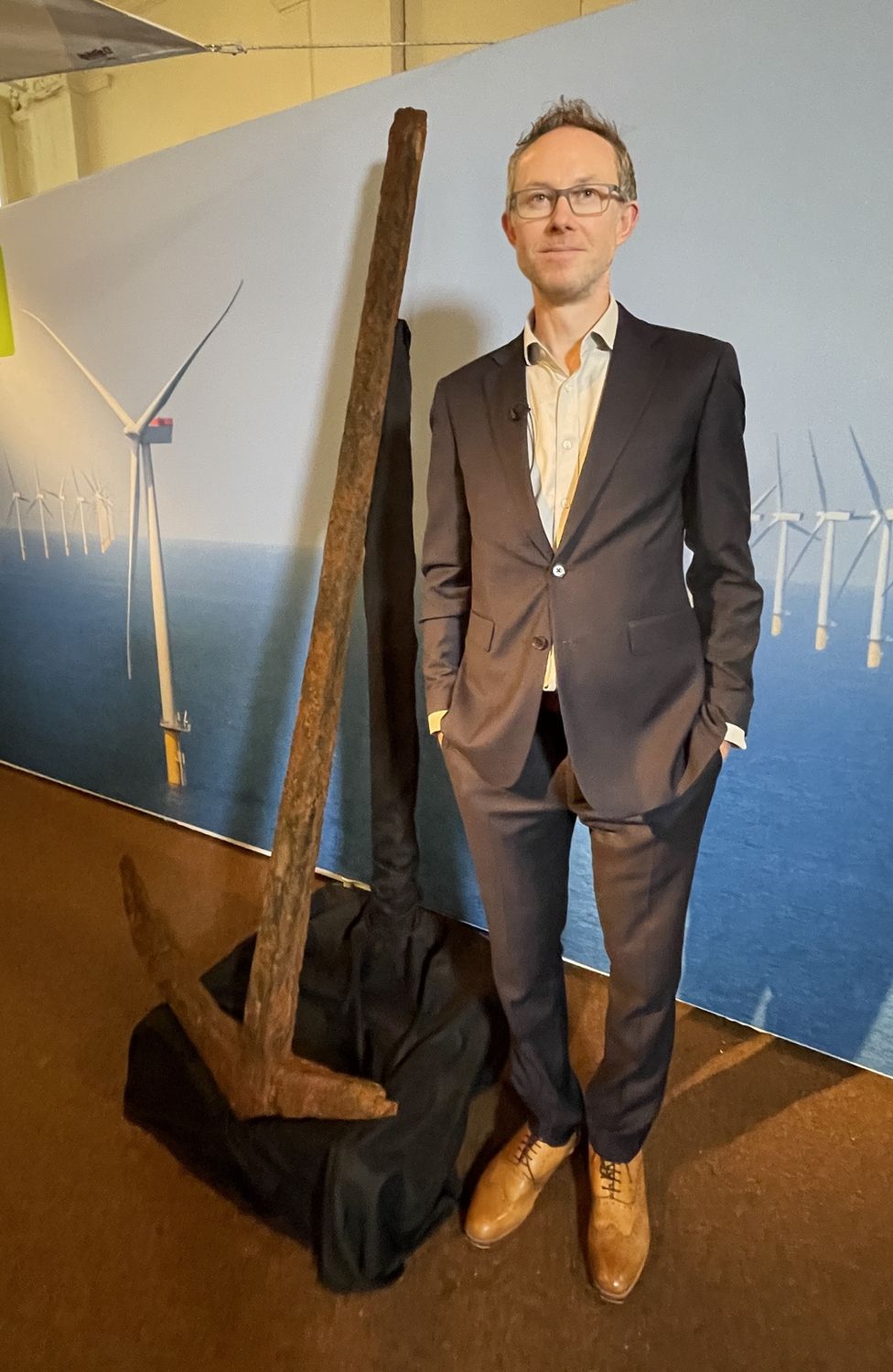 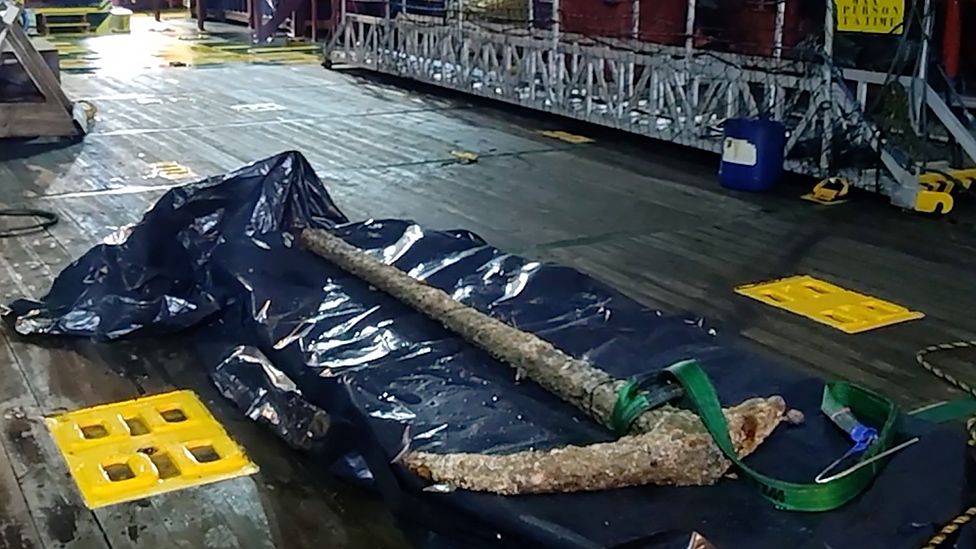 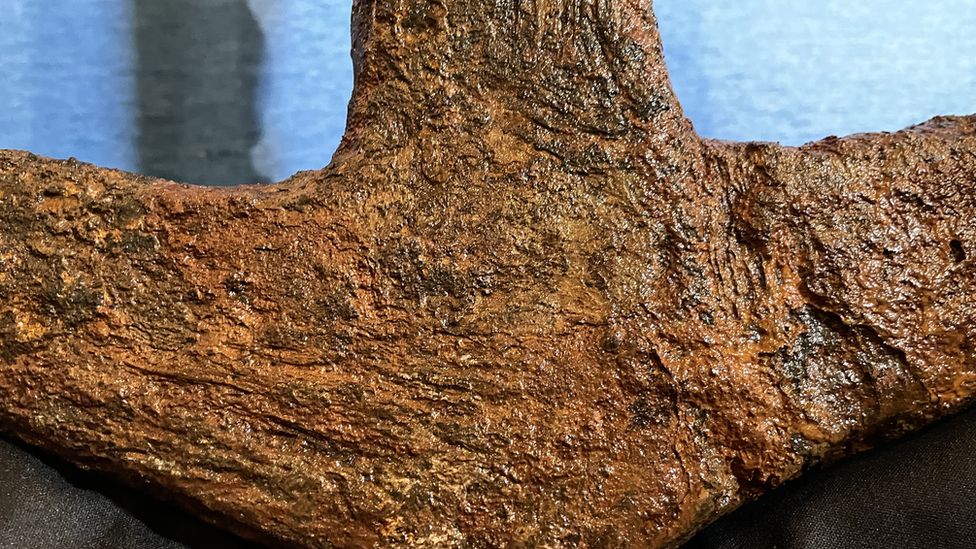 Detail of the corrosion on the wrought iron anchor, which weighs 100kg (220lb)
Image  Mike Liggins / BBC Image
After its discovery, the anchor was protected by an exclusion zone installed on the seabed during construction work on the wind turbines.

Once the analysis and conservations works are complete, the anchor will go on permanent display in conjunction with Colchester and Ipswich Museums.

Although it has yet to be dated more precisely, archaeologists said there were several features that suggested it could come from the Imperial Roman period.

If confirmed, it would provide evidence of ancient Romans seafaring and trading in the southern North Sea, off the coast of the East of England.

The Imperial Roman period lasted from about 27BC to the late 3rd and 4th Century when the empire expanded, especially to the west.

In 54-55BC Julius Caesar tried to invade Britain, but failed, and then in AD43 the Roman army landed in Kent and began to conquer what is now England and Wales.

Scottish Power Renewables, which built the windfarm, said it made other finds during the work including a missing German submarine from World War One and an ancient wild cattle skull, which has been radiocarbon-dated to more than 6,000 years old.

The East Anglia One windfarm is located around 40km (25 miles) off the coast of Suffolk and will have 102 turbines when finished.
Links :