A brief geography of time 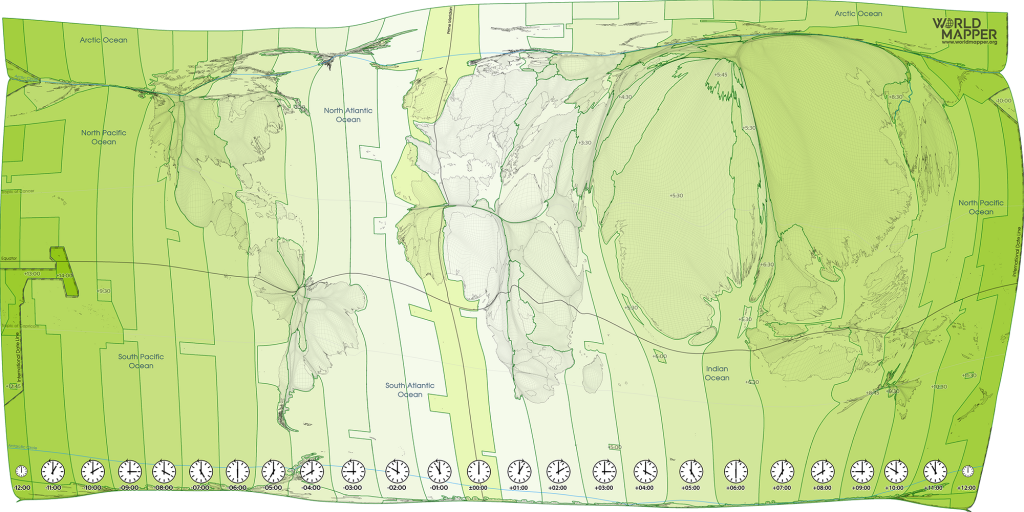 From Worldmapper by Benjamin Hennig

Sometimes referred to as the fourth dimension, time has a highly geographical relevance 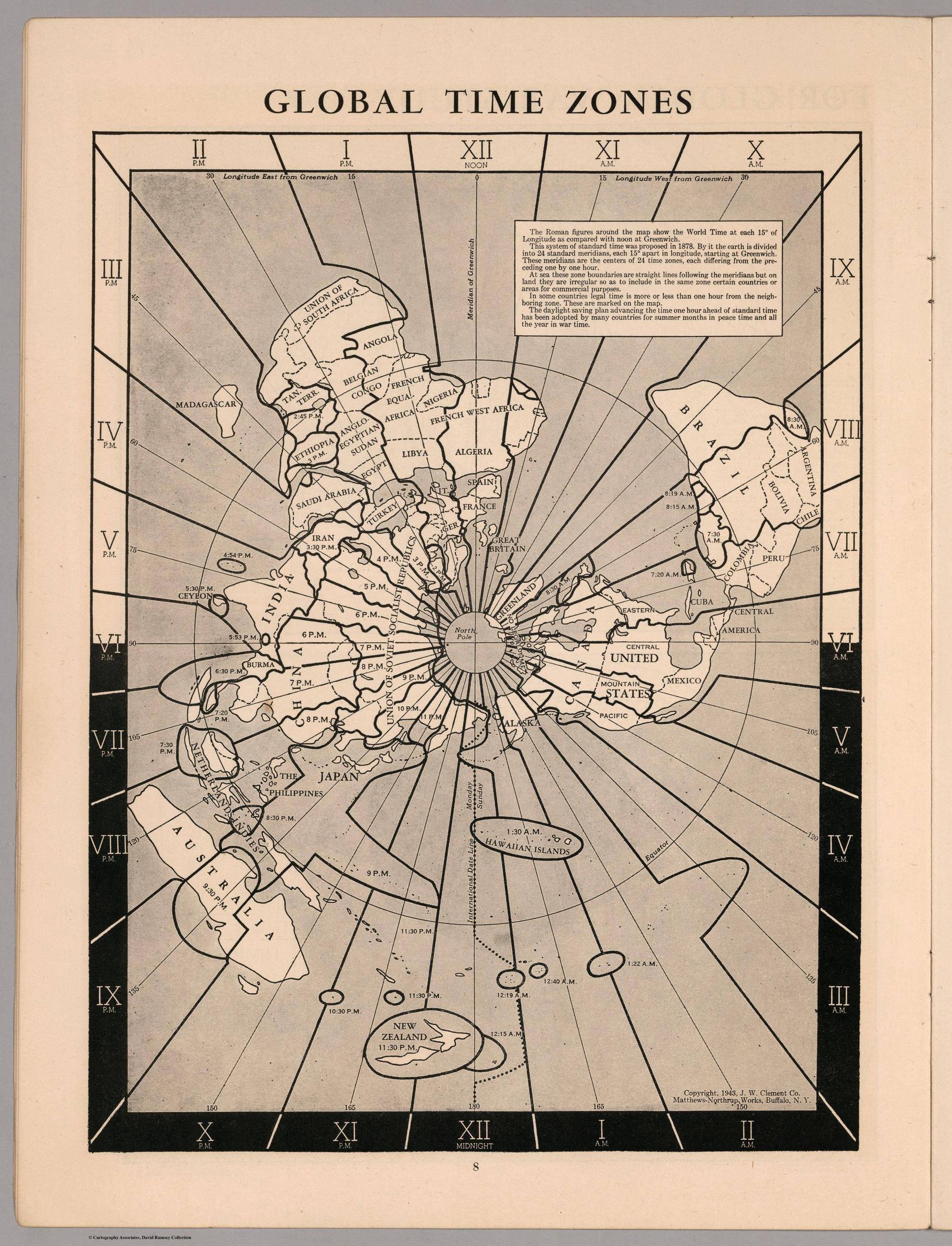 For human geography, population sizes can have as much impact on the ‘tempo of places’ as culture or even climate.
In physical geography, the concept of time is indispensable for an understanding of how the natural environment has changed and keeps changing.

In the 21st century, time has been described as being a commodity itself, affecting everything from manufacturing and trade, to financial flows and global transport links.

The general geographic distribution of time zones is based on the general concept of dividing the world into zones of equal time following a 24-hour day around the world.
In theory, this means that there are 12 time zones of 15° width in which each differs by one hour’s time difference.

The 12 TZ for France

The necessity of time zones was closely linked to growing needs of transport and communication links during industrialisation.
British railway companies began adopting Greenwich Mean Time (GMT) which helped to coordinate timetables.
In 1880, GMT became standard across Britain and time differences of tens of minutes between cities in the country started vanishing.
At a global level, time zones became established in the first decades of the 20th century.

But as much as time zones are legal, commercial and social constructs, they are also highly political issues which find their expression in the spatial patterns of today’s time zones.
The adoption of the Greenwich meridian itself can be seen as a highly political act that helped in manifesting a Euro-centric world view.
Furthermore, many of the time zone boundaries do not follow the geographical pattern of each zone.
Most boundaries follow political boundary lines such as country or state borders.
While in some cases this can be practical minor deviations, more often the political decisions for time zones have a considerable impact on people’s everyday lives.

The most extreme example for geographical distortion through time can be seen in the case of China which covers the extent of five time zones, but only uses one, orientated on the location of Beijing (at UTC +8 hours).

At the most extreme ends of the country, people use the same time even if sunrise is approximately four hours apart.
India made a similar decision to continue using only one time zone by adjusting Indian time half way between the two time zones that used to divide the country (now at UTC +5:30 hours), with only approximately two hours solar difference appearing between the outermost parts of the country.

Another political decision was North Korea’s creation of Pyongyang Time in 2015, creating a 30-minute distance to its southern neighbour.
Another political decision was Iceland’s move to abolish changing the clocks between summer and winter time in 1968.
Iceland’s decision meant a move towards adopting Greenwich Mean Time and becoming the westernmost country in that zone.
On GMT’s eastern edge, almost all of the western European countries that would geographically fall into this zone instead adopted Central European Time (GMT +1), which has become equally large, touching the geographic extent of almost four time zones.

Larger populations are not always affected by such deviations from the theoretical time zone: The most extreme deviation was created by Kiribati’s decision to realign the zone for the Line Islands with the same date as its territory, meaning that the sparsely populated islands follow the same time as Hawai’i but are one day ahead as the ‘easternmost land’ with the earliest time zone (GMT +14 hours).

The above cartogram shows time zones from the perspective of an equal-population projection – a gridded population visualisation where each small area is proportional to the population living there.
The map highlights how these geopolitical considerations have an effect on the impact that time has on people and the functioning of the world.
Globalisation is far from having resulted in a compression of space and time.