Why time will stop for a leap second

Time will stop on June 30, but don't worry: It will only be for a second.
Researchers will add a sliver of time—a leap second—to the world's clocks.

An atomic clock based on cesium ticks away
at the German National Metrology Institute in northern Germany.
Photograph by Focke Strangmann, AP

Just as leap years keep our calendars lined up with Earth's revolution around the sun, leap seconds adjust for Earth's rotation.
This kind of fine-tuning wasn't much of an issue before the invention of atomic clocks, whose ticks are defined by the cycling of atoms.
Cesium-based clocks, one kind of atomic clock, measure the passage of time much more precisely than those based on the rotation of our planet, so adding a leap second allows astronomical time to catch up to atomic time.
Most of us won't notice the addition, which happens at 23:59:59 coordinated universal time (UTC), or 7:59 p.m. ET, unless we deal in timescales shorter than a second, or if we use a computer program that crashes because it can't handle the leap second.
It's happened before: The 2012 leap second brought down Reddit, Gawker Media, and Mozilla.

"It's a major interruption mostly because there are a lot of systems that aren't prepared to handle the leap second correctly," says Judah Levine, a physicist at the National Institute of Standards and Technology (NIST) in Boulder, Colorado.
Leap seconds occur irregularly, which makes it hard for programmers to test their fixes, he explains.

Leap seconds don't come on a regular schedule because Earth's rotation varies, says Demetrios Matsakis, chief scientist for time services with the United States Naval Observatory in Washington D.C.
Our planet is slowing down, but it does so in unpredictable ways. So some periods require more leap seconds than others.

The International Earth Rotation and Reference Systems Service continuously monitors our planet and will recommend adding leap seconds to the International Telecommunications Union (ITU).
The ITU makes the ultimate decision on whether to add a leap second or not.
The last leap second was added in 2012, but in the early 1980s, time scientists were adding them every year, Levine explains.
Leap seconds were first introduced in 1972, and at that point, atomic clocks and astronomical clocks were already off by ten seconds, says Andrew Johnston, a geographer at Smithsonian's National Air and Space Museum in Washington D.C.
So researchers added ten seconds all at once in 1972 to the world's astronomical clocks, he explains.

Earth's rotation is a part of defining time.
Leap seconds are added to our clocks to compensate for the Earth's slowing rotation.

Levine is responsible for making sure the nation's timekeepers at NIST can handle the leap second. When it comes time to adjust their clock, NIST will transmit 23:59:59 UTC twice, Levine says. "Once when that time arrives, and once again for the leap second." So 6 p.m. mountain time—the NIST offices in Colorado are seven hours behind UTC—on June 30 will be stressful.
"There's a full panic mode just before and after 6 p.m.," he says.
Even if all goes well during the addition, Levine and his team are usually greeted the morning after by a deluge of emails concerning various problems.
Not everyone recognizes the leap second, although Apple does so on its devices.
Google mobile devices sync with Internet time services that are usually tied to atomic clocks.
But "if you have a standard Windows system, [it] just ignores the leap second," Levine says.
Financial markets like the New York Stock Exchange also take the leap second into account.
The exchange will close the market a half hour earlier than normal, at 7:30 p.m. ET on June 30, to help their systems deal with the addition.

Navigation services, like the U.S. Global Positioning System (GPS), never use leap seconds, Levine says.
That's because they need accurate measures of time in their calculations.
If they stopped their internal clocks for the leap second, they would get inaccurate positions.
The end-user isn't aware of this because the GPS system will still send information to the receivers we use—whether it's something we've picked up in an outdoor equipment store or our smartphones—about the leap second.
So we'll see the correct time on our devices.
But "true GPS time is off from civilian time by something like 16 seconds," says Levine. 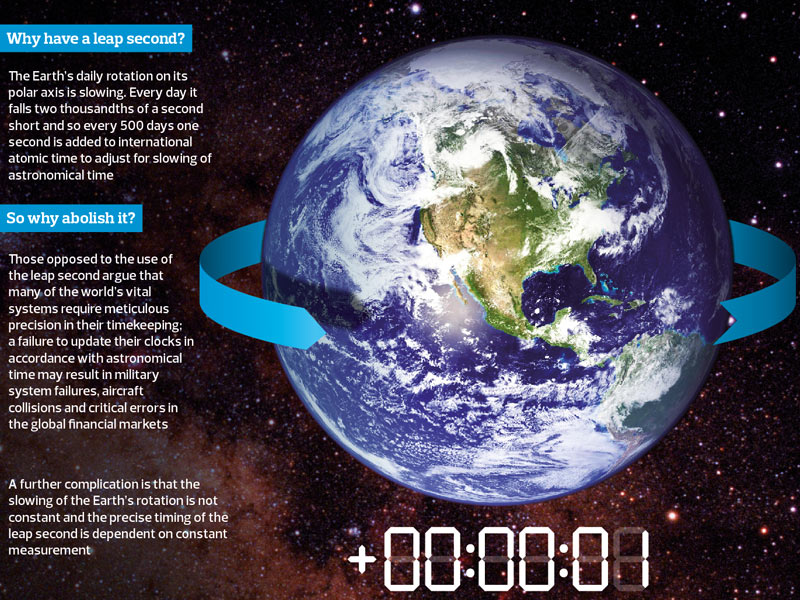 The leap second correction affects all GNSS receivers, software and correction services which have to compensate for the additional second in their output messages, clock synchronization and position computations.

The headaches caused by the leap second have prompted some to recommend doing away with it all together.
The organization responsible for deciding when to add a leap second has deferred making a decision on the issue but will discuss it again later this year, Levine says.
The Smithsonian's Johnston is "agnostic" about the leap second, although he knows plenty of engineers who would love to do away with it.
"But folks I know in the astronomy community would prefer to keep [leap seconds]," he says.
"Things seem to be going the direction of stopping leap seconds," Johnston says.
But people will have to wait and see what the International Telecommunications Union decides.
"My personal preference is that we stop doing this business," says NIST's Levine.
"The price for that would be atomic time would slowly walk away from astronomical time."
But it would only be about a minute or two difference over a hundred years.
Levine doesn't think that would be so bad.
Doing away with the leap second "would make my life easier."

Maritime Time Zones with GeoGarage API
Timezones are already a absolutely horrid mess,
and everybody actually tracking the leap second would in many ways be much much worse.