The importance of surveying relic munitions and unexploded ordnance

Relic munitions and unexploded ordnance are a global problem, ubiquitously affecting European coastal waters.
The risk of possible detonations and environmental contamination hinders the development of many sectors of the blue economy — including offshore energy, shipping, aquaculture and tourism.

For the police divers who work for the Schleswig-Holstein Bomb disposal unit in Kiel, their daily job is to go down into the murky cold sea to find lost weapons of war, a deadly legacy of the 20th century.
The coastal waters of Germany and other European countries are scattered with old munitions.
They rarely explode, but some can detonate if hit by an anchor.
Measures to protect the seafloor
On the day we visit Schleswig-Holstein's special unit, the bomb hunters are heading to the military port of Kiel.
Navy specialists have found a submerged explosive device close to the pier there. 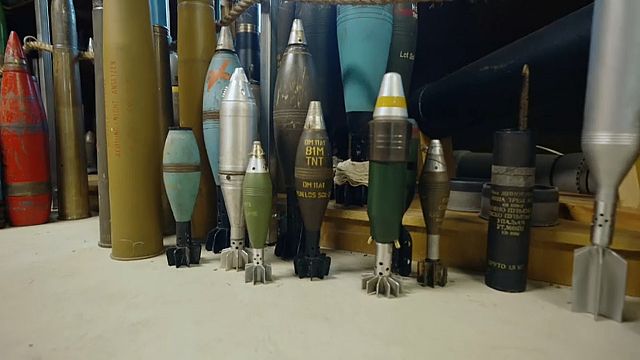 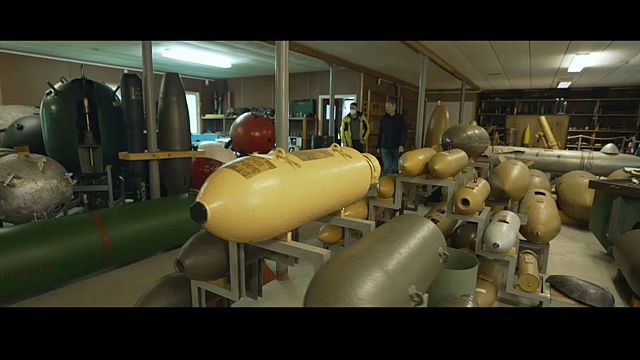 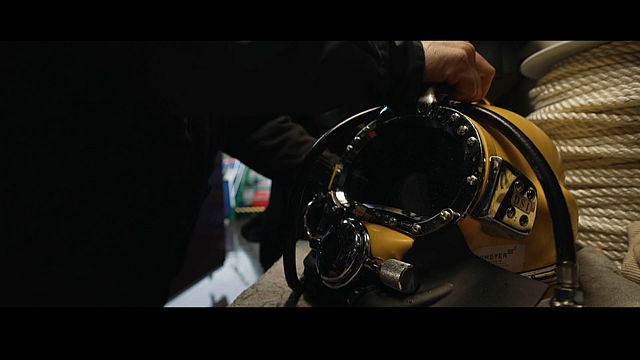 As a rule, the divers try to extract the weapons for proper on-land disposal.
Only when that is not possible, are the bombs detonated on the seafloor.

Frank Ketelsen, Head of the diving operations at the Schleswig-Holstein Bomb disposal unit, tells us that if they must detonate a bomb in the water, they set up "air bubble curtains to protect marine mammals".
The tip of the iceberg
At the bomb unit headquarters, there are many samples of munitions from various periods and of different origins.
The collection is used to train new police officers.

Unexploded bombs found on land often make the news, but munitions on the seabed are rarely heard of, yet their quantity is unbelievable.

Oliver Kinast, Head of the Schleswig-Holstein bomb disposal unit, says that there's an estimated "1.6 million tonnes of munition from the World Wars in the North and Baltic Sea, 300 000 tonnes of which are in the Baltic Sea alone".
According to him though, those figures don't fully take into account munitions lost during battle operations.
The hunt for underwater munitions
Littorina, a scientific vessel from the GEOMAR institute, takes us along with a team of scientists to a large munitions dumpsite a few kilometres off the Baltic coast of Germany.
Two EU-funded projects, BASTA and ExPloTect, are testing new methods of finding bombs there: relic munitions are becoming a growing problem for marine industries and underwater ecosystems.

Aaron Beck is a researcher in aquatic biogeochemistry for the GEOMAR Helmholtz Centre for Ocean Research Kiel.
He has realised that the more they develop offshore resources, the more munitions they encounter and "the more they have to be cleaned up".
He thinks that "the biggest impetus for cleaning them up is wind farm installation, cable laying and so forth".
Polluting the sea
However, that is not the only problem these munitions pose.
They are becoming big pollutants.
"All of these munitions are in metal casings, and they all have been corroding for 70-80 years. We're coming up to a point where all the chemicals that have been inside will all start to come out", Aaron adds.

Much of the munitions on the seabed, both conventional and chemical, were deliberately disposed of in large numbers by the armed forces of many different countries.
Our knowledge of where exactly all these dumpsites are is patchy. 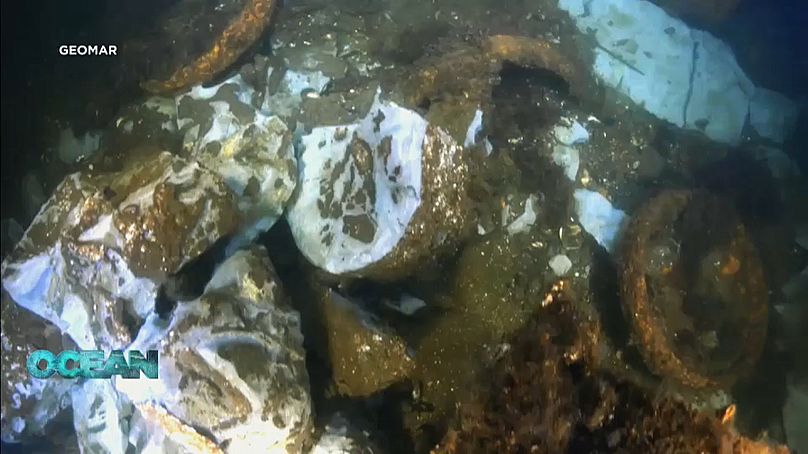 An AUV image of underwater munitions, chunks of TNT and other explosives
GEOMAR
Vehicles adapted for seafloor exploration
Autonomous underwater vehicles explore the seafloor quickly and efficiently.
They take pictures and measurements using a magnetometer.
Several of these devices can work simultaneously, which greatly reduces the costs.

On the seafloor, we see a hoard of decaying munitions that includes two-meter-long bombshells and bare chunks of toxic explosives.
Similar dumpsites can be found off the coasts of various countries in Europe and around the world. 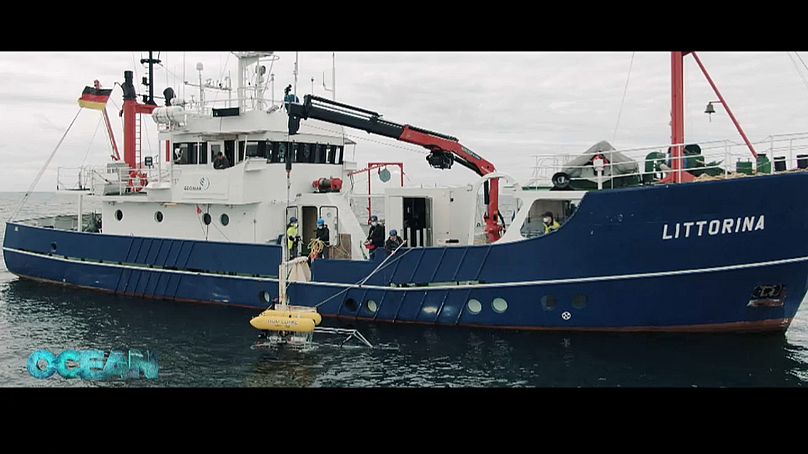 AUV LUISE being lowered into the seaeuronews
The BASTA project vehicle, LUISE, explores the seafloor along a programmed trajectory, transmitting collected data to a ship.
The detailed photos and magnetic measurements, together with results of previously conducted acoustic scanning, reveal the exact shape of the suspicious objects and the presence of metal in their composition.

Marc Seidel, a Geophysicist for GEOMAR tells us that by combining the camera footage and the magnetic signatures that they measure, they get a good idea of what the object might be. Chemical analysis gives even more clarity.
'Silver bullet' technology
Scientists from the ExPloTect project are developing a sampling system with special filters for catching dissolved particles of explosive materials from the seawater.
Back on the ship, the samples are further concentrated and analysed with a compact mass spectrometer that indicates the presence of various explosives.
This method can drastically speed up detection of underwater munitions.

According to Aaron Beck, a researcher in aquatic biogeochemistry for the GEOMAR Helmholtz Centre for Ocean Research Kiel, with the new chemical analysis, they've gone from two to three months from collecting a sample to getting the data to the whole process potentially only taking 15 minutes.
"We need that kind of rapid response", he says. 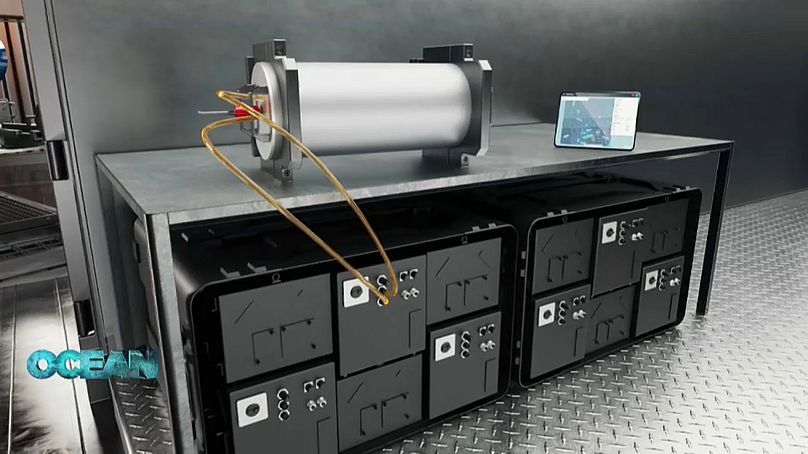 The ExPloTect system visualisationK.U.M. Umwelt- und Meerestechnik Kiel
Developers call this new weapon in the fight against underwater munitions a "silver bullet".
It hits the target for many industrial sectors that now spend a lot of time and resources clearing unexploded ordnances (UXOs), off the seabed.

The technology is also helping out the environment.
Onno Bliss, Business Development Manager for K.U.M. Umwelt und Meerestechnik, says that they will adapt the technology to different kinds of structures.
It will enable them to do long-term "permanent environmental monitoring at known UXO fields".
Doing so is also another way to decide where to start clearing the munitions first.
But how can the huge amount of data collected by underwater vehicles be processed?

Egeos, a company based in Kiel, is developing a software platform that brings together new scientific data and relevant historic records like old archives documenting coastal military operations.
The algorithms look for relevant data patterns, suggesting areas that are likely to be contaminated with munitions.

To the CEO and founder of Egeos, Jann Wendt, "automation is definitely helping".
The process is still quite manual, but they're improving every day.
"We are getting smarter from the side of data analytics. We are getting smarter from the perspective of autonomous underwater vehicles, autonomous sensors that are capturing this data and that makes the whole process cheaper", he explains.

Clearing the seabed is a task with huge economic potential.
Private companies are already developing large-scale projects for the recovery and proper disposal of underwater munitions.
According to Aaron Beck, there's a whole industry of people able to find and clean up munitions on the seabed.
All they really need is the funding to be able to do so.

Huge masses of underwater munitions are rusting and will release toxic content into the seas in the near future.
Can we stop this ticking time bomb before it’s too late?
Links :
Posted by geogarage at 1:58 AM