Getting to the bottom of trawling’s carbon emissions 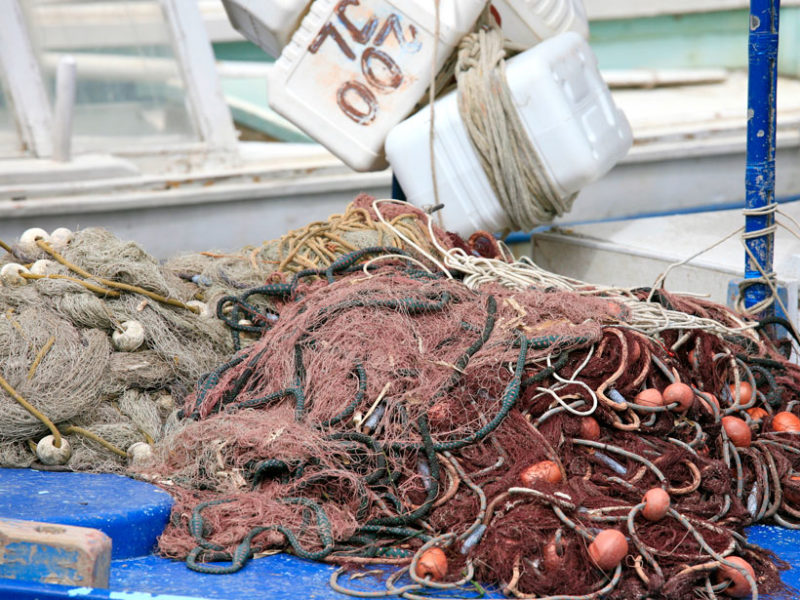 A new model shows that bottom trawling, which stirs up marine sediments as weighted nets scrape the ocean floor, may be releasing more than a billion metric tons of carbon every year.

Bottom trawling, a controversial fishing practice in which industrial boats drag weighted nets through the water and along the ocean floor, can unintentionally dig up seafloor ecosystems and release sequestered carbon within the sediments.
For the first time, researchers have attempted to estimate globally how this fishing technique may be remineralizing stored carbon that, as the seabed is tilled, ends up back in the water column and possibly the atmosphere, where it would contribute to climate change.
“The ocean is one of our biggest carbon sinks, so when we put in more human-induced CO2 emissions…we’re weakening that sink.”“The ocean is one of our biggest carbon sinks,” said Trisha Atwood, who researches aquatic ecology at Utah State University.
“So when we put in more human-induced CO2emissions, whether that’s directly dumping CO2 into deep waters or whether that’s trawling and enhancing remineralization of this carbon, we’re weakening that sink.”

Atwood helped build a model that shows that bottom trawling may be releasing as much as 1.5 billion metric tons of aqueous carbon dioxide (CO2) annually, equal to what is released on land through farming.
Her work was part of a paper recently published in Nature that presents a framework for prioritizing the creation of marine protected areas to restore ocean biodiversity and maximize carbon storage and ecosystem services.
Estimating Carbon Loss from the Ocean Floor

To create the model, Atwood and her coauthors first needed to figure out how much of the ocean floor is dredged by trawlers.
They turned to data from the nonprofit Global Fishing Watch, which recently began tracking fishing activity around the world and compiled data on industrial trawlers and dredgers from 2016 to 2019.

The next step was to find data on how much carbon is stored in the world’s ocean sediments.
Because that information was not readily available, Atwood and colleagues built a data set by analyzing thousands of sediment cores that had been collected over the decades.

Last, they dug through the scientific literature, looking at studies that examined whether disturbances to the soil in coastal ecosystems, such as seagrasses, mangroves, and salt marshes, exposed carbon that was once deep in marine sediments and enhanced carbon production in the ocean. 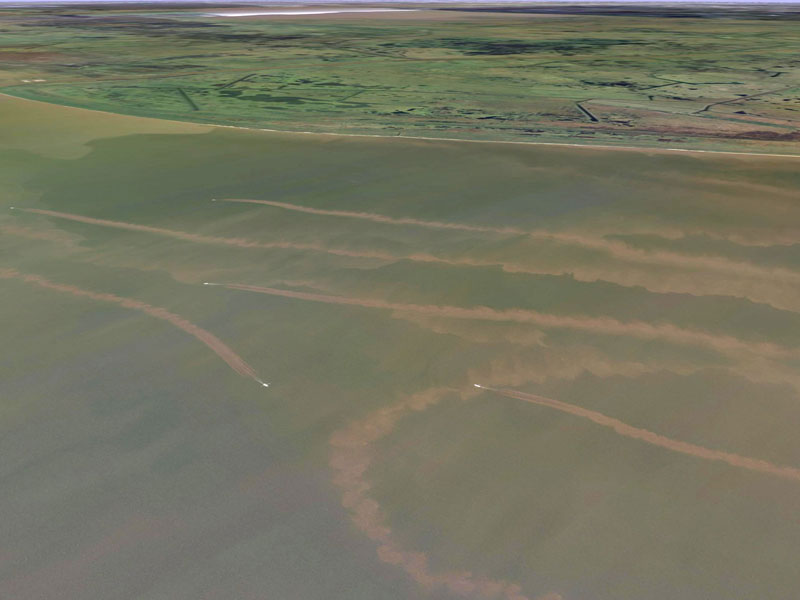 A group of twin-rigged shrimp trawlers in the northern Gulf of Mexico off the coast of Louisiana.
The trawlers are trailed by a plume of sediment, suggesting that their nets are scraping against the seafloor.
Credit: SkyTruth Galleries, CC BY-NC-SA 2.0
“We lean really heavily on that literature,” said Atwood.
“We used a lot of the equations [in previous papers] to build our model and extend it into the seabeds in these more open ocean locations.
And from there, we were able to come up with this first estimate.”

Their investigation did not attempt to determine whether sequestered carbon that has been released by bottom trawling remains in the water column or is released into the atmosphere, although they noted potential problems either way.
In the paper, the authors noted that it is likely to increase ocean acidification, limit the ocean’s buffering capacity, and even add to the buildup of atmospheric CO2.

Atwood and the lead author of the paper, Enric Sala, a conservation ecologist who is also a National Geographic Explorer-in-Residence, are working with Tim DeVries, who studies ocean biogeochemistry at the University of California, Santa Barbara, and scientists at NASA’s Goddard Space Flight Center to build atmospheric models to try to figure out where the released carbon goes.
Existing Trawling Data May Be Too Scant

Not everyone, however, is convinced that Atwood and Sala’s model on bottom trawling and loss of carbon sequestration in marine sediments is accurate.
Sarah Paradis, who is studying the effects of bottom trawling on the seafloor for her Ph.D.
at the Institute of Environmental Science and Technology in Barcelona, is skeptical.

In an email to Eos, Paradis noted that since the 1980s, there have been fewer than 40 studies that address the impacts that bottom trawling has on sedimentary organic carbon.
These few studies are not enough to build a model on, she said, and in addition, the studies reach different conclusions.
Some studies have observed that bottom trawling decreases organic carbon content of the seafloor, whereas others show it increases organic carbon.“We in no way intended our model to be the end-all in the trawling conversation.
We hope that many more studies will come along that help produce more localized results.”In addition, Paradis wrote that lower organic carbon on the seafloor does not necessarily mean its remineralization to CO2.
Rather, it could simply mean loss of organic carbon through erosion, which means the carbon moves to another area of the seabed but very little is remineralized into CO2.
She pointed to several studies, including one that she was a part of, that showed loss of organic carbon through erosion.

“I want to emphasize that [the authors] address a very important issue regarding how bottom trawling, a ubiquitous and very poorly-regulated anthropogenic activity, is affecting the seafloor,” she wrote.
“But the values they propose are far from being credible.”

Atwood disagreed.
“We don’t need lots of studies on the effects of trawling because we built our model using decades of carbon cycling research,” she wrote in an email to Eos.
“Trawling is simply a perturbation that mixes and re-suspends sediments, leading to increases in carbon availability.
All we needed to know about trawling to apply a carbon model to it is where trawling occurs and how deep in the sediment the trawls go.”

In addition, Atwood said, “We in no way intended our model to be the end-all in the trawling conversation.
We hope that many more studies will come along that help produce more localized results.”