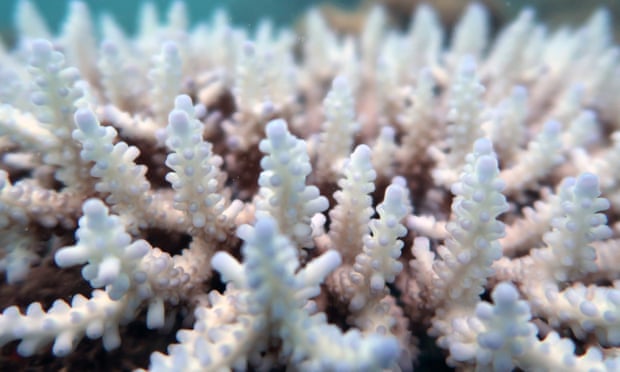 From The Guardian by Lisa Cox

The outlook for Australian sites including the Blue Mountains and the Gondwana rainforests has deteriorated, report saysThe outlook for the Great Barrier Reef has worsened from ‘significant concern’ to ‘critical’, the International Union for Conservation of Nature says.

The outlook for five Australian world heritage sites including the Great Barrier Reef, the Blue Mountains and the Gondwana rainforests, has deteriorated, according to a global report that finds climate change is now the number one threat to the planet’s natural world heritage.

The International Union for Conservation of Nature, the official advisory body on nature to the Unesco world heritage committee, has found in its world heritage outlook that climate change threatens a third of the world’s natural heritage sites.
The outlook has been published every three years since 2014. 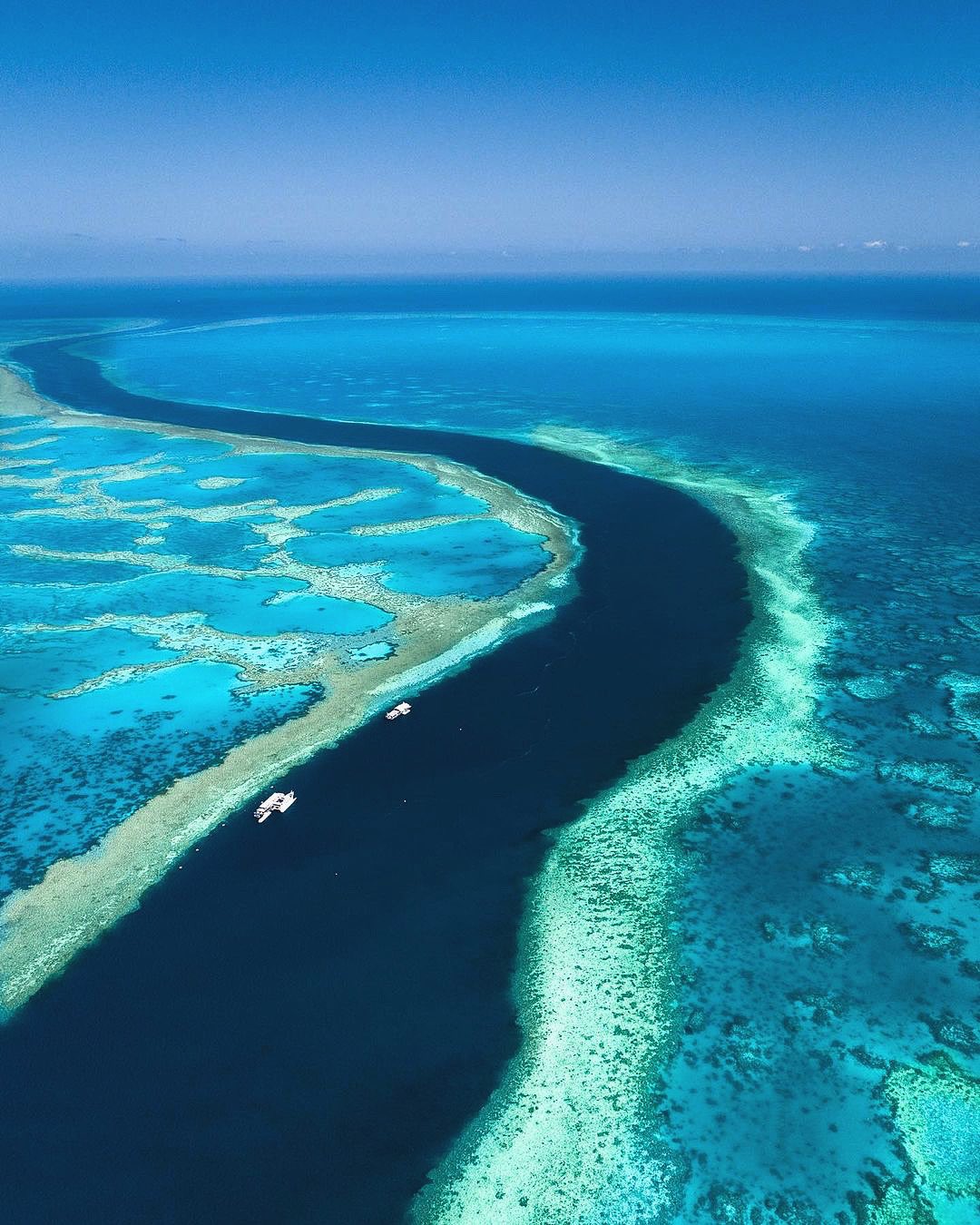 It finds the conservation outlook for the Great Barrier Reef has worsened from “significant concern” to “critical” – the most urgent status under the IUCN system.
The reef suffered its third mass coral bleaching in five years during the 2019-20 summer.

In the aftermath of the 2019-20 bushfire disaster, the Gondwana rainforests – comprising 40 separate reserves between Newcastle and Brisbane – and the Greater Blue Mountains world heritage area have seen their outlook move to “significant concern” in 2020 from “good with some concerns” in 2017.

The fires affected more than 80% of the Blue Mountains world heritage area and more than 50% of the Gondwana rainforests, with the bushfire royal commission finding the disaster was just a glimpse of what climate change would deliver to the country in the future.

Western Australia’s Shark Bay and Ningaloo Coast world heritage sites have deteriorated in the IUCN outlook from “good” to “good with some concerns”.

Other Australian world heritage sites remained in the same categories from previous reports including the Kakadu National Park and Queensland’s wet tropics, which are both listed as “significant concern”. 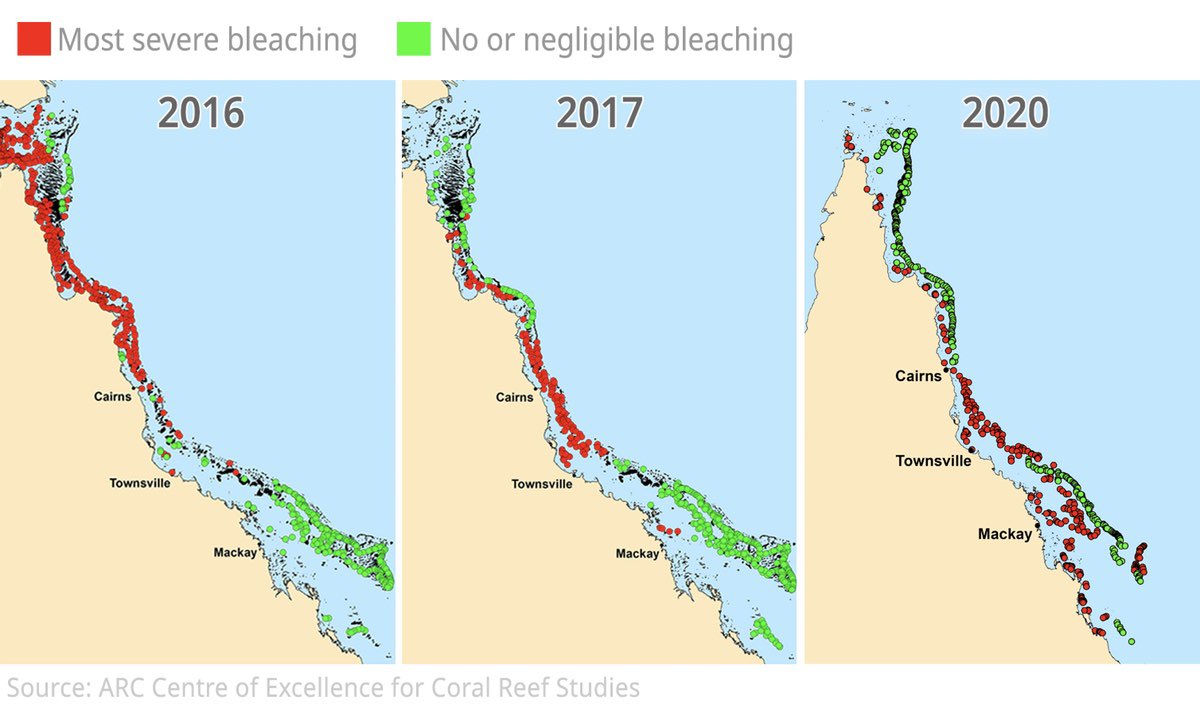 The renowned coral reef scientist, Terry Hughes, said it was logical the IUCN had moved the Great Barrier Reef into the critical category after three bleaching events in five years.

But he said it didn’t make sense that others, such as the Ningaloo Reef that fringes the Ningaloo Coast, were not also considered critical given the scale of the threat climate change posed to coral reefs worldwide.

“It’s not really credible to say the Barrier Reef is now super vulnerable to climate change but other coral reefs around the world aren’t,” he said.
“Unesco have actually made that case very clearly.”

The report finds climate change is either a very high or high threat to 11 out of the 16 natural and mixed sites and that the “manifold” effects of the climate crisis – including increased frequency and severity of fires, droughts and coral bleaching – were often accompanied by other threats, leading to a poorer outlook overall.

K’gari/Fraser Island, which was ranked “good with some concerns”, is the latest world heritage area to suffer the effects of catastrophic fire, with half of the island burnt in a bushfire that has been alight for six weeks.

On Wednesday, the chair of the next major UN climate summit pointedly thanked Australia’s state and territory governments – but not the Morrison government – for committing to targets of net zero emissions by 2050.

Last month, the IUCN World Conservation Congress passed a motion moved by an alliance of Australian environment groups that called on the Morrison government to show leadership and ensure its planned reforms of Australia’s national environmental laws delivered more for the environment, including world heritage areas.

“Australia’s World Heritage sites are places of outstanding global significance and it is our privilege – and responsibility – to lead in protecting these values, including from the impacts of climate change,” said Rachel Lowry, WWF-Australia’s chief conservation officer.

Lowry said a stronger government plan to address the climate crisis and reduce emissions was “essential for these special places to remain”.

“There is no doubt that if we are to learn from the recent devastating bushfires, as well as the findings in this report, we must commit to regenerating Australia and setting our nation on a pathway where both people and nature benefit,” she said.

The Australian Marine Conservation Society’s Great Barrier Reef campaign manager, Dr Lissa Schindler, said: “The federal government’s refusal to act decisively on climate change is unforgivable when they know that global heating is so dangerous for our reef.

“We call on the federal government to take its role as custodians of our international icon seriously by committing to a pathway compatible with 1.5C of heating in a wide-ranging national climate change policy,” she said.

A spokesman for the federal environment minister, Sussan Ley, said the report reflected the extreme weather events Australia had experience over the past 12 months.

Australia's Great Barrier Reef runs the risk of another summer of elevated coral bleaching if cyclones and other rain events don't arrive to "suck out the heat"
He noted the IUCN had reviewed Australia’s protection and management of world heritage sites favourably, which he said was due to the “significant work” of federal, state and territory governments at those sites.

“Australia is committed to playing its role in a global response to climate change, it is investing unprecedented amounts protecting the reef, in bushfire wildlife and habitat recovery and in supporting our world heritage places,” the minister’s spokesman said.

The IUCN’s director general, Bruno Oberle, said countries owed it to future generations to protect the world’s “most precious places”.

He said the report showed “the damage climate change is wreaking on natural world heritage, from shrinking glaciers to coral bleaching to increasingly frequent and severe fires and droughts”.
Links :