Watch Conor Maguire surfing a 60-foot monster wave at Mullaghmore Head, in County Sligo, Ireland. Maguire has taken the surf world by storm in recent years.
And when Hurricane Epsilon produced 60-foot waves off the coast of County Sligo, in his native Ireland, he was quick to embrace the opportunity of a lifetime.
Conor Maguire started surfing when he was 11 and went on to become the youngest European to be shortlisted for the World Surf League's Big Wave Awards.
In 2017/2018, the 26-year-old Irish swell hunter received an invitation to compete at the Punta de Galea Challenge.
The participation catapulted him to bigger, global recognition.
This time around, Maguire was quick to pounce on a weather forecast, which looked almost too good to be true when he traveled to Mullaghmore Head.
The powerful Atlantic Ocean conditions were caused when tropical Hurricane Epsilon merged with a depression and produced massive, freak swells out at sea.
Mullaghmore Head is well-known by European big wave riders.
It is a brutal surf break with cold water and often rainy and cloudy winter skies.
This storm surge created waves up to 18 meters high, and Maguire was accompanied closely by a safety team for his trip out.
"There are only a handful of days like this one in your whole life pretty much, so to experience that today was pretty special," stated Conor Maguire after taking on the historic XXL waves at Mullaghmore Head.
From Surline by Dashel Pierson
All eyes are on the North Atlantic, as the XXL swell window kicked off this week with a bang.
And while the collective gaze is mostly fixated on Nazaré, and the historic sessions currently going down there, the rest of Europe is worth a look, too.

Case in point: Ireland. Earlier today, Ireland’s premier slab and big-wave spot saw some of the heaviest water to ever detonate upon the reef.
And local charger, Conor Maguire, got the wave of the day…if not the century.
At first glance, the wave is reminiscent of the Code Red swell at Chopes, or the XXL freesurfs from the Volcom Fiji Pro in 2012 – but then you notice the characteristic Irish hue: emerald green. 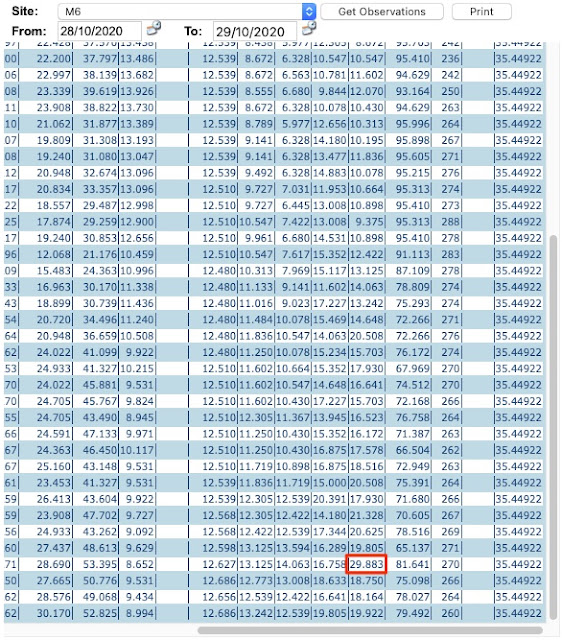 The wave generated by the tail end of Hurricane Epsilon was one of the highest ever recorded in Irish waters
The network is managed by the Marine Institute in collaboration with Met Éireann and the UK Met Office.
The Irish Weather Buoy Network is designed to improve weather forecasts and safety at sea around Ireland.
The buoy network provides vital data for weather forecasts, shipping bulletins, gale and swell warnings as well as data for general public information and research.
source : The Skipper
Links :
Posted by geogarage at 1:18 AM