Arctic headache for ship insurers as routes open up 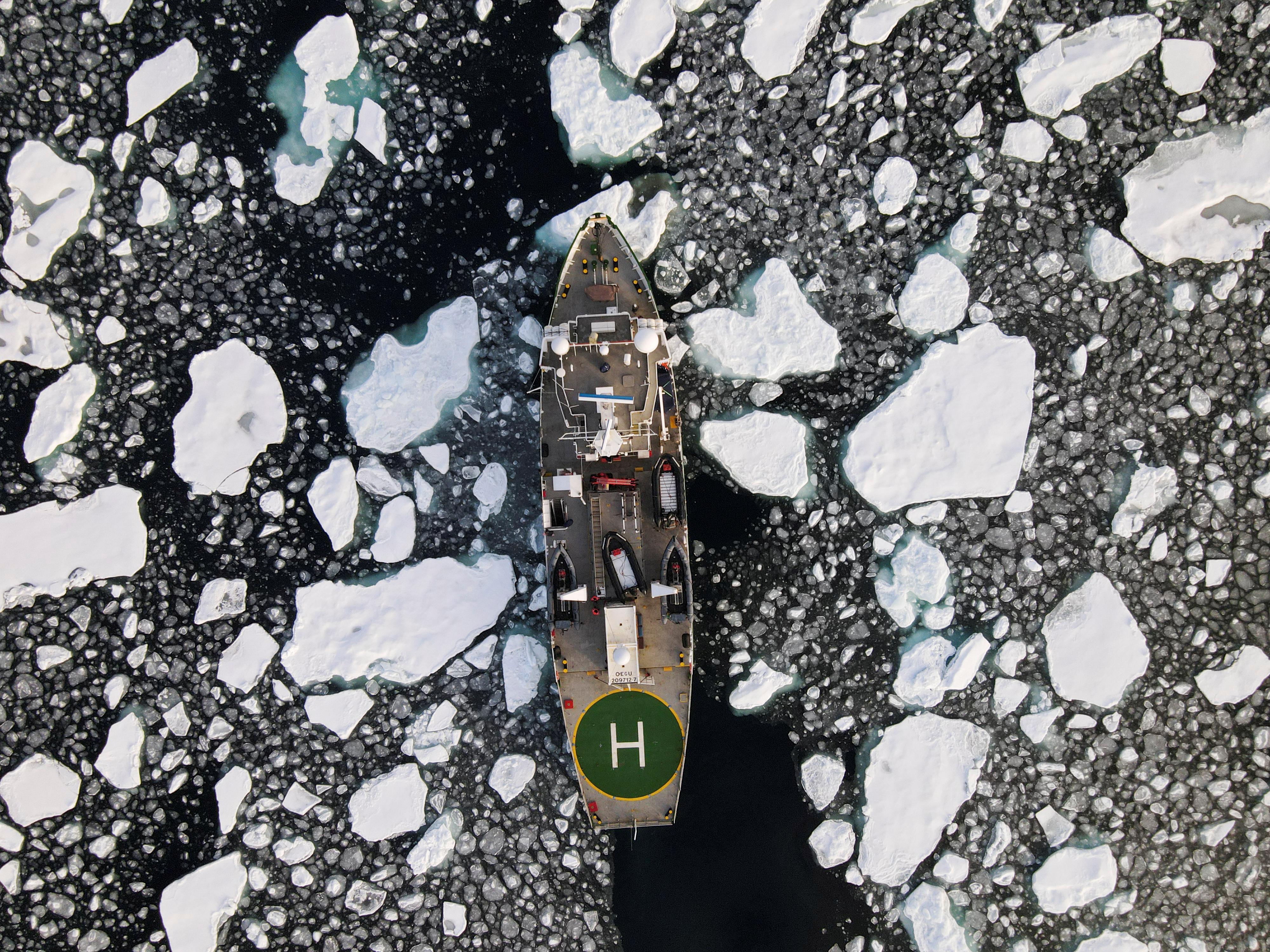 When Captain Will Whatley guides a ship through Arctic waters, he is starkly aware of what can go wrong.

Double the manpower is needed to navigate.
Lookout shifts are kept to just one hour, so sailors don’t lose concentration and miss a mass of floating ice.
Big icebergs show up on radar, but smaller, truck-sized “bergy bits” - even more dangerous - can be missed, the captain says.

The cold can freeze equipment and the earth’s magnetic field disrupts compasses.
If anything goes wrong, “you are so far away from help,” said Whatley, 31, who sails through Arctic and Antarctic waters for the British Antarctic Survey.

As climate change opens new sea routes, experienced polar captains like Whatley are coveted for Arctic voyages that can save money on the run between Europe and Asia.
But as activity in the Arctic’s waters picks up, insurance companies are grappling with a fundamental question: If something goes wrong, who pays?

So far, it’s unclear that the cost of a major accident would be completely covered by insurance.
Damages from a ship spilling oil, hitting an iceberg or becoming marooned can run into the hundreds of millions of dollars.

“It’s all very much new territory,” said Helle Hammer, chair of the policy forum with the International Union of Marine Insurance (IUMI), the leading association for the global marine insurance market.
Without years worth of data on the number of casualties, accidents, collisions or oil spills, she said, “it’s impossible to do the risk modelling.”

More than 10 insurance companies or brokers interviewed by Reuters said they still had too little knowledge of the region to resolve all questions about liability.

In the past few years, marine insurers in general have been paying out more for ship damage than they collected in premiums, according to IUMI data.
Brokers say some are pulling out of the market completely.
So the appetite to underwrite risks in the Arctic market is not high.

It’s “not like the rest of the world, with tried and tested shipping routes and known risks,” said Michael Kingston, an Arctic marine consultant and adviser to the Arctic Council, an intergovernmental forum on Arctic affairs.

For insurers that do contemplate new ice routes, there is a dramatic precedent: The Titanic, which hit an iceberg and went down in the freezing waters of the North Atlantic in April 1912.
The loss was as devastating then as more recent catastrophes like Hurricane Katrina have been since, leading global insurance market Lloyd’s of London says.

That cruise liner went down in relatively familiar waters.
But only about 6% of the Arctic Ocean is charted, said Ian Church, an ocean acoustic mapping specialist at the University of New Brunswick. 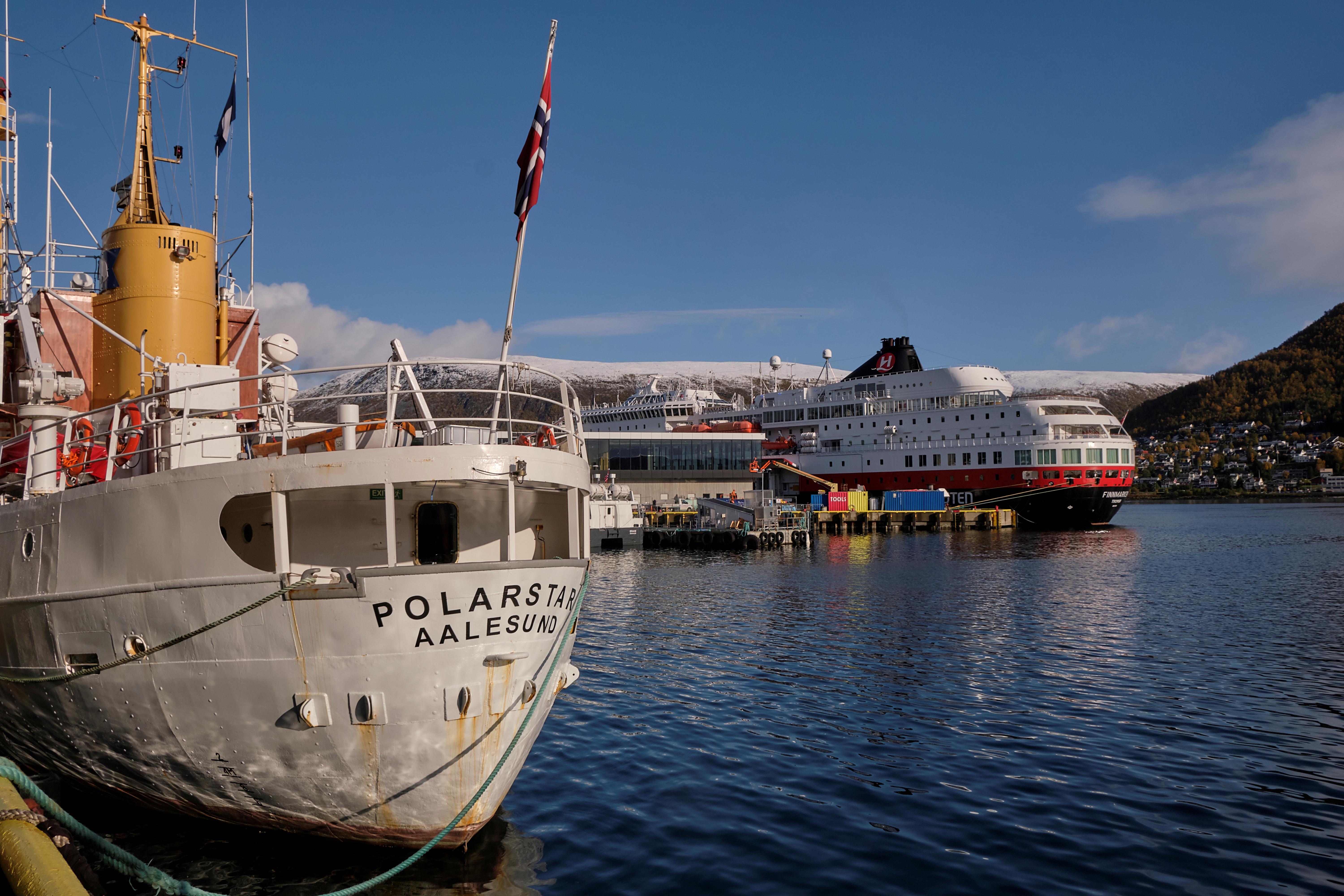 Arctic tour ship MS Polarstar and Norwegian coastal ship MS Finnmarken are seen in the port in Tromso, Norway September 19, 2019.
Reuters/Ints Kalnins/File Photo
Improvising Premiums
The risk can be worth it.
A journey between Europe and Asia via the North Pole takes roughly 30 days - at least 10 fewer than the Suez Canal route.
That can save a cargo ship carrying iron ore or grain $200,000 or more on fuel, food, crew wages and tolls.

Such potential savings are attracting big shipowners – to haul cargo including natural gas and oil mostly from Russia, Canada and China - to waters where so far mostly fishing trawlers have ventured.

The Northern Sea Route along Russia’s Arctic coast is increasingly popular.
In the four years up to 2019, the number of voyages that used at least part of that route increased by 58% to 2,694, according to a study by Norway’s Nord University.

“This trade will get bigger and bigger,” said Andrew James, executive director of marine at the UK arm of insurance broker and risk manager Arthur J.
Gallagher and Co.
“Underwriters will have to respond to that.”

Larger cargo ships present higher risk.
Complete with cargo, crew, fuel and ballast water, such a ship is much harder to manoeuvre or tow than a trawler. 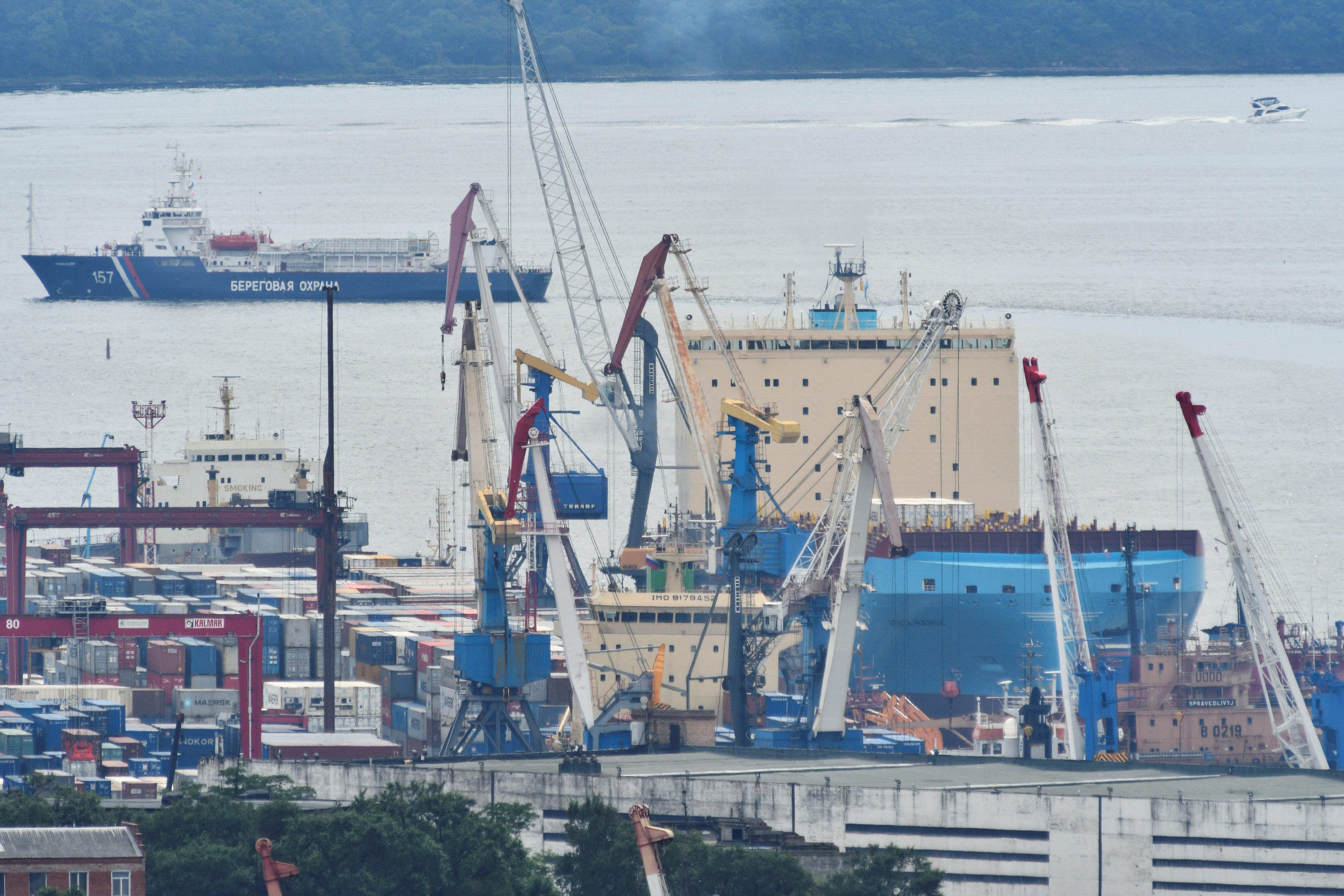 The Venta Maersk in the Russian port of Vladivostok as it prepares to set off on its Arctic voyage, Russia August 22, 2018. Picture taken August 22, 2018.
Reuters/Yuri Maltsev/File Photo
So far, the most common problems have not involved hitting icebergs, but equipment that freezes and seizes up.

Out of 512 incidents reported through 2019, machinery damage or failure accounted for almost half, according to a 2020 shipping and safety report by insurer Allianz Group.
Other incidents included a crack in the hull, onboard explosions and sinkings.

That means much of an insurer’s cost is getting a damaged ship to back ports from remote locations.
“The fees for the tug could run into millions of dollars,” said Gallagher’s James.
“The claim itself could be quite small for the physical damage, but the overall claim could be a lot of money.”

In assessing Arctic risks, insurers effectively improvise.
In interviews with Reuters, those that cover Arctic voyages said they conduct their own assessments, then add up to 40% to the basic premium of $50,000 to $125,000 for the ship alone to guarantee a single Arctic journey.
The final price depends on the ship, the route and how near an icebreaker is, the insurers said.

In 2010 a passenger vessel, Clipper Adventurer, ran aground with more than 100 passengers in the Canadian Arctic.
It was lucky: The country’s only Coast Guard mapping vessel was just 500 nautical miles away and arrived some 40 hours later.

“Luckily the weather was perfect that day, sunny and perfectly calm, so we were able to get everybody off,” said mapping specialist Church, who was on the rescue vessel.

The Clipper Adventurer had to return to Europe for repairs.
Its owners sued Canada for $13.5 million for the grounding, but lost the case, Canadian court records show.
Canada counter-sued and was awarded some $445,000 for costs incurred for pollution control. 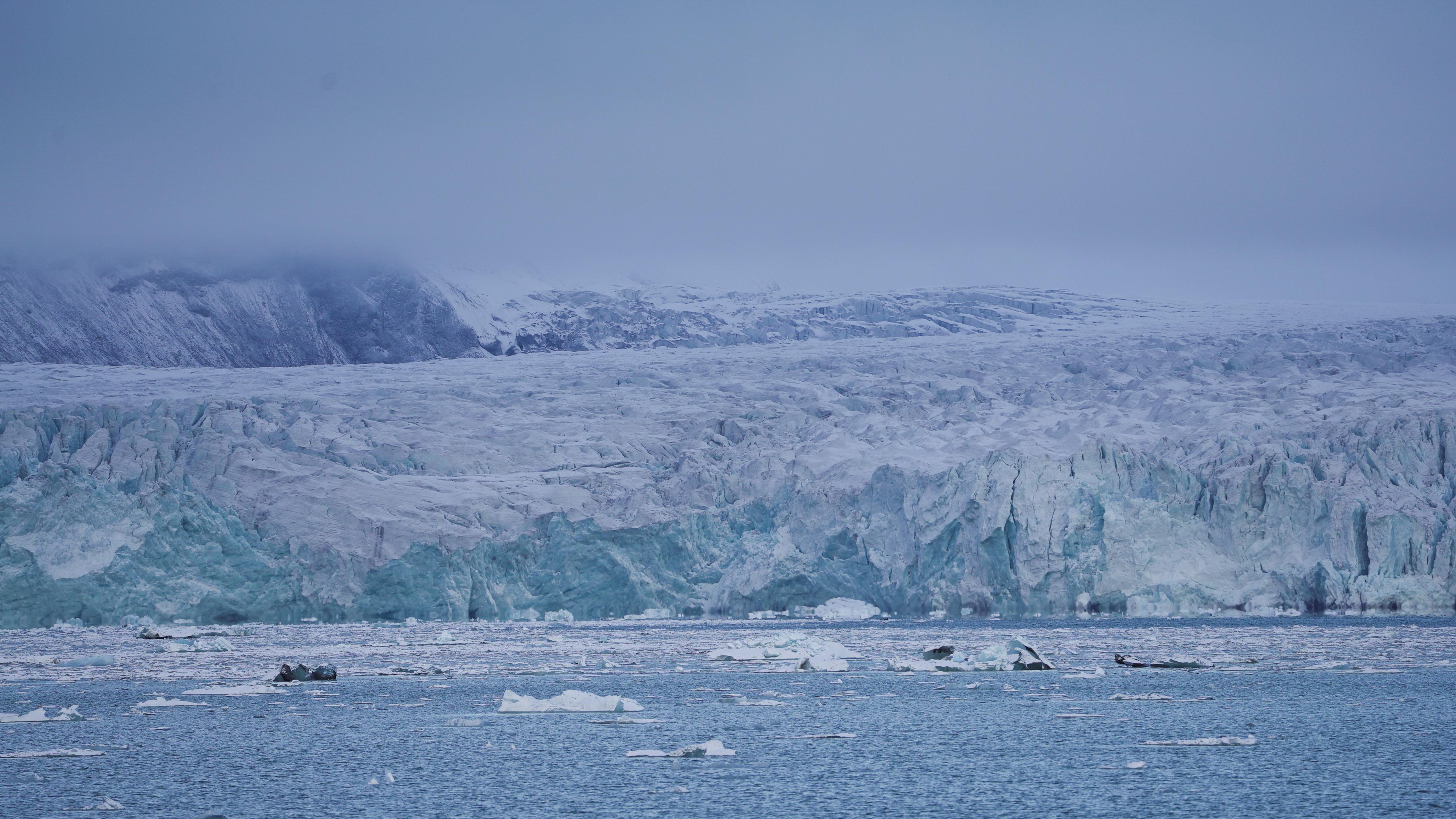 In 2017, the U.N.’s International Maritime Organization introduced new standards for Arctic navigation including ship design and equipment, search and rescue protocols, and special training for captains.

But compliance with some of that “Polar Code” is voluntary.
On top of this, there is no central authority collating national and company accident reports, so there is no way to know the full extent of Arctic accidents.

Norway this year launched an expert group on shipping safety, two years after a Norwegian flagged trawler ran aground while fishing off the ice-heavy Svalbard archipelago on Dec.
28, 2018.

The 14-member crew of the Northguider were evacuated and the fuel onboard safely removed.
But it took another two years for the vessel to be fully salvaged, as work crews struggled to carve up the ship and remove it in pieces amid bouts of bad weather and months of darkness.

“The Northguider was a wakeup call,” said Rune Bergstrøm of Norway’s Coastal Administration.
“The whole operation - saving people, offloading the fuel and removing the ship - was a challenge.
If there had been more people and a bigger ship it would have been very difficult to have saved the people.” 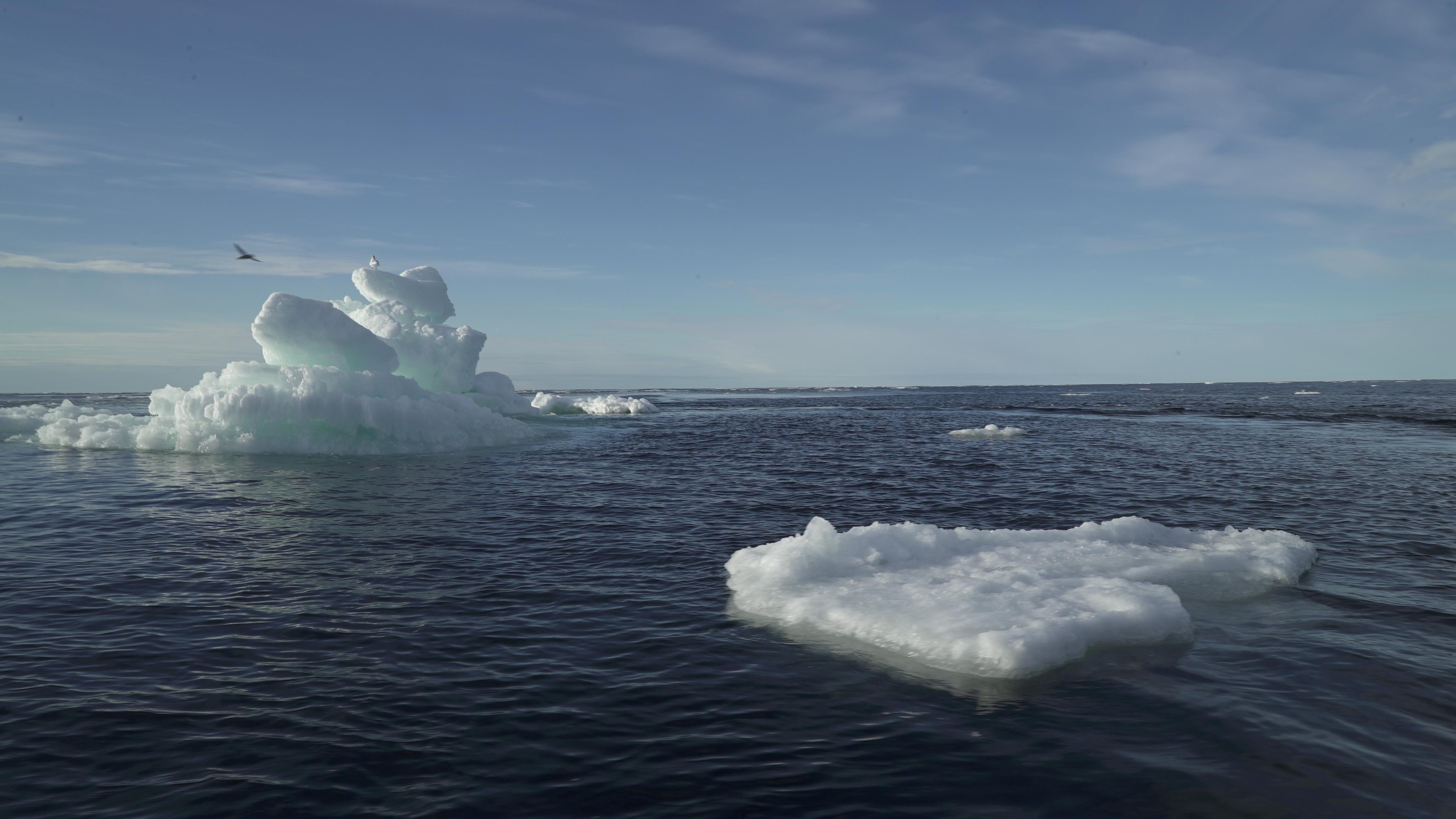 Floating ice is seen during the expedition of the The Greenpeace's Arctic Sunrise ship at the Arctic Ocean, September 14, 2020.
Reuters/Natalie Thomas/File Photo
Best charts available
Aside from the cold and the rogue ice floats, heavy fog can obscure observations.

And the lack of maps means that beneath the water’s surface, the sea floor largely remains a mystery.
Because routes shift frequently with changes in ice conditions, navigation is even more treacherous.

This was a problem two years ago for another passenger vessel, Akademik Ioffe, which ran aground in the Canadian Arctic. 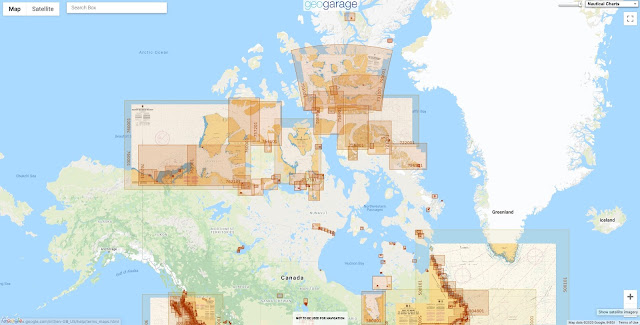 Nautical chart coverage (North of Canada) CHS with the GeoGarage platform
There had been too much ice in the bay where the ship was scheduled to sail, so it made a last-minute change of route.

“They definitely had the best charts available to them,” said Dwight Coleman, a marine geologist and coastal mapping expert at the University of Rhode Island who was helping direct the science efforts on board.
“It was just an unfortunate incident of a grounding on a shoal or a rock that was uncharted.”

Church said map coverage of the Arctic is slowly increasing, but it’s expensive and time-consuming to re-issue charts.
Even as new hazards are found, sometimes they’re only recorded as notices to mariners, so may be missed.

“What it comes down to is a cost-benefit analysis,” he said.
“How many ships are up in the Arctic navigating around versus how much does it cost to map it?”
Links :
Posted by geogarage at 1:49 AM