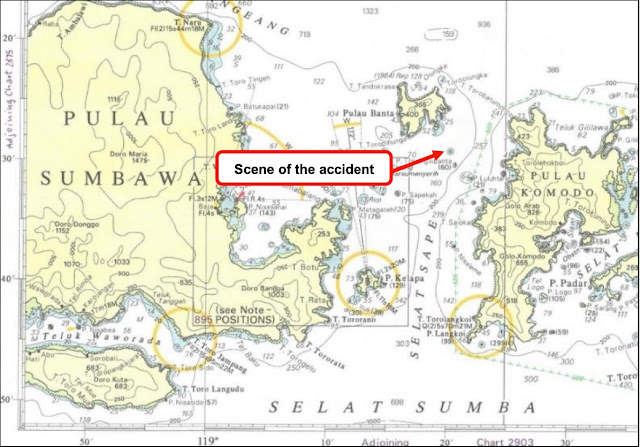 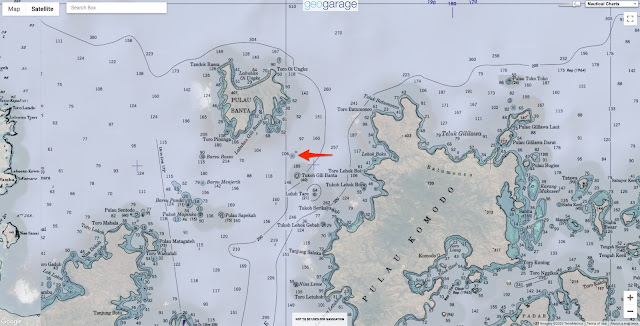 A report by BSU into a chemical tanker grounding gives interesting insight into the importance of understanding the accuracy of electronic chart data. 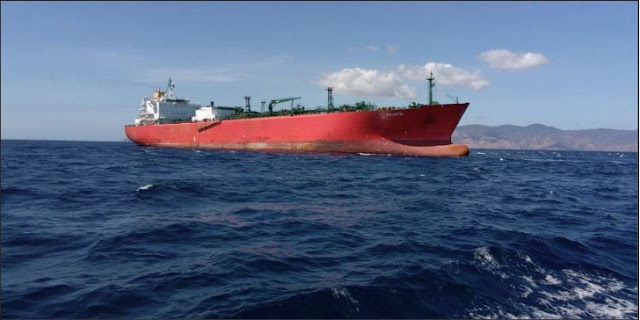 A report by the Germany Federal Bureau of Maritime Casualty Investigation (BSU) of the grounding of 42,000 dwt chemical tanker PAZIFIK in Indonesia in July 2018, published in January 2020, gives interesting insights into the importance of crew understanding the quality of official electronic navigation chart (ENC) data accuracy. 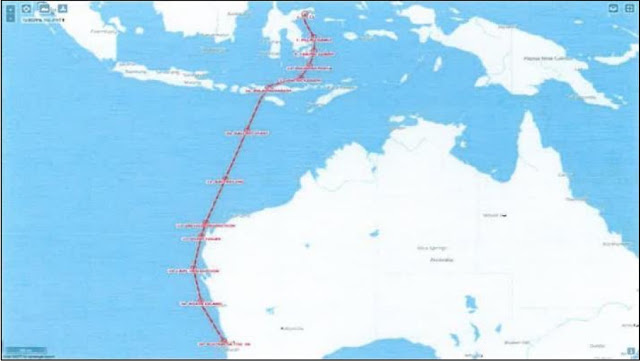 The root cause of the accident could be described as the vessel hitting a rock.
The rock was shown on the ECDIS display with a note “underwater rock (always underwater / submerged 1 MAR 2017)”. 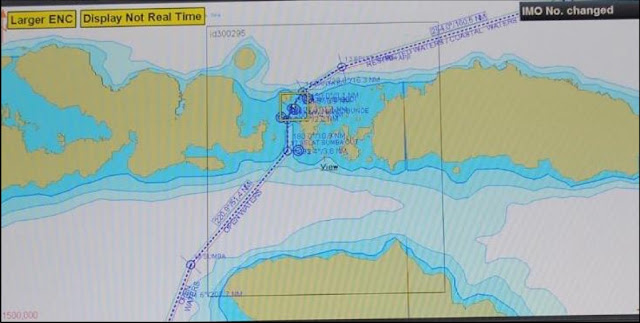 From this, they assumed that the rock was not a hazard, since surrounding water was a comfortable 100m depth.

The crew also thought the vessel was at a safe distance from the underwater rock, since the electronic chart display had a “cross track distance” of 182m either side of the vessel, and the rock was much further away than 182m, according to the ECDIS display.

(The cross track distance is a system on ECDIS displays where vessels are given a safe corridor shown by red and green lines, rather than a specific course, taking uncertainty into account). 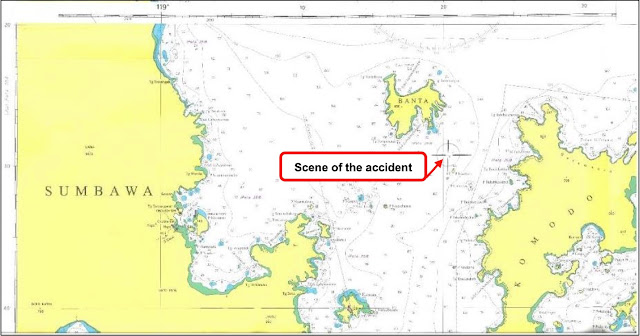 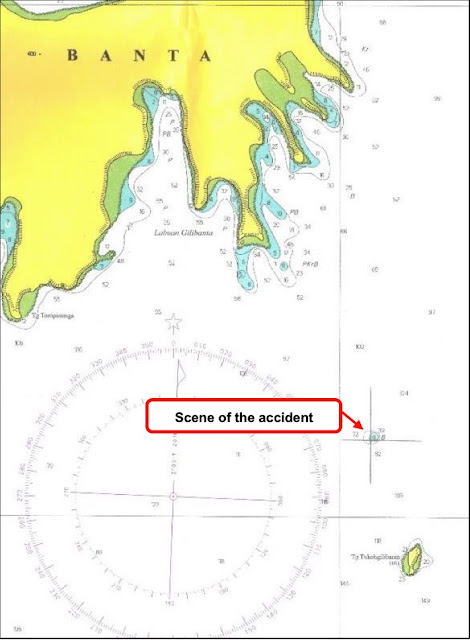 But in reality the rock was only 9m below the water surface, and located 400m away from where it was stated to be on the ENC.
The ENC’s stated accuracy was +/- 500m. 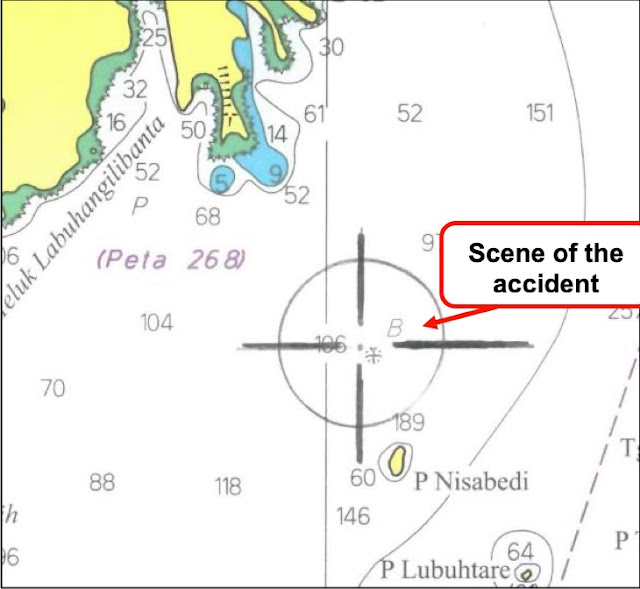 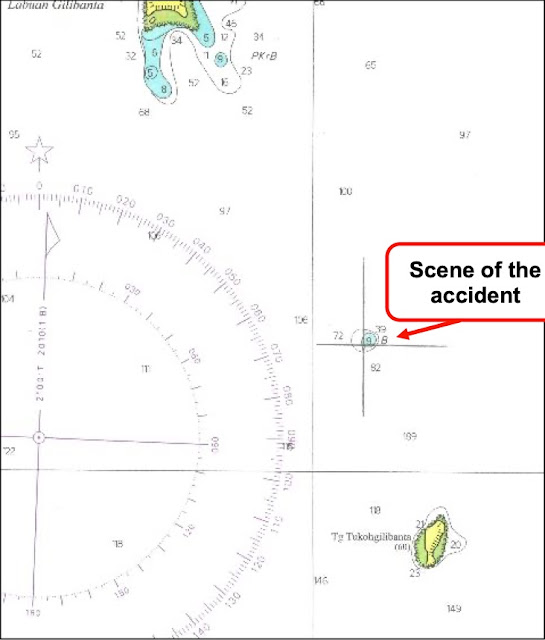 The rock’s location was also shown accurately on a small scale paper chart mapped in a 1904 Dutch survey, and warnings were published in “Sailing Directions” available onboard. BSU heard from local sources that several other ships have ran aground on the same rock.

The route chosen was recommended by the vessel’s passage planning software.
The vessel's master was familiar with a route through the Lombok Strait, which would have added 200 nautical miles to the voyage.
He decided to take the route recommended by the software to save the 200nm, the Selat Snape strait between Komodo and Banta.

The vessel was loaded with 18,000 tonnes of ammonia – although no cargo escaped because only the forepeak / ballast water tanks were damaged.

It was able to refloat 5 days later after transferring cargo and ballast water to other tanks, and could proceed to a shipyard in Singapore under its own power, supported by a tug.
The repair included renewing 50m of the double bottom. 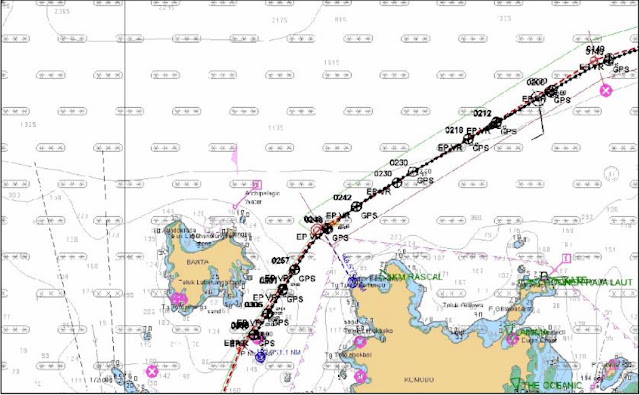 Voyage according to route planning 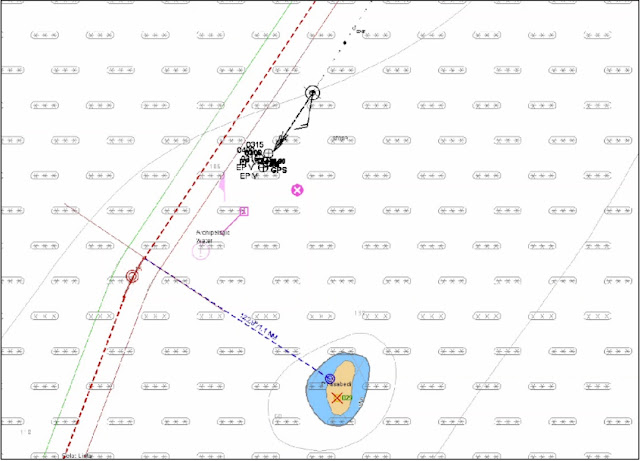 In its original plan (which was changed due to fishing vessels), the vessel had planned to pass the rock at a distance of 0.7 nautical miles (1300m). 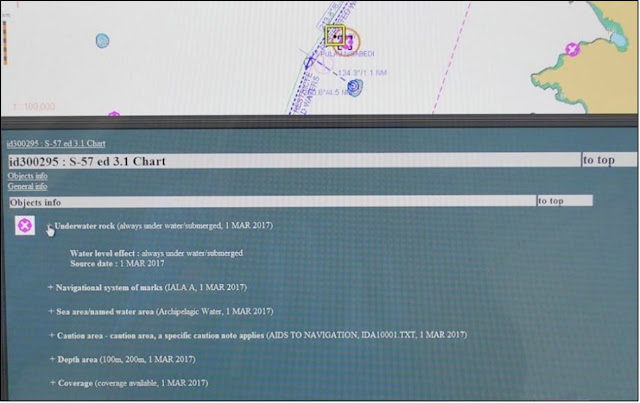 Information stored in the ENC
The following supplementary information is stored for this isolated danger:" Underwater rock (always under water/submerged 1MAR2017)"

Its ENC was classified as “Zone of Confidence Category C”, which means a position accuracy of +/- 500m horizontally, and “full area search not achieved". 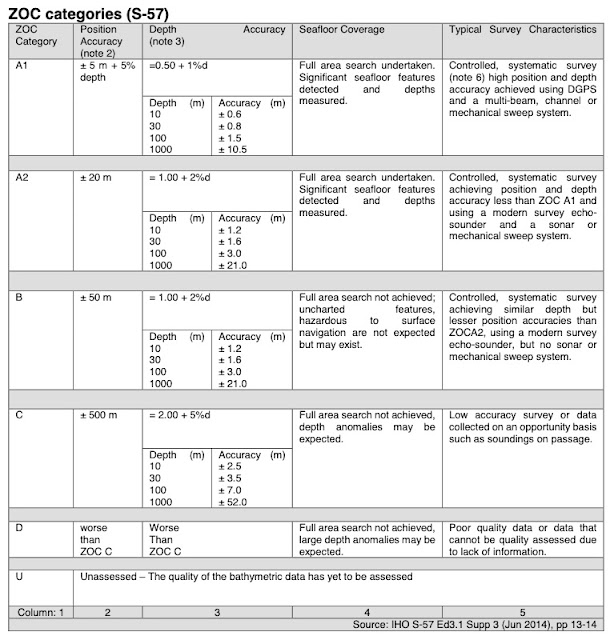 This fits company procedures, where it recommends to keep a "cross track distance setting" of 2 x the vessel's beam in confined waters, or just 64.4m, and this passage is considered "confined waters" in the procedural specifications, so the 0.1m (180m) cross track was considered within limits.

There could have been an alarm in the ECDIS that the cross track was set to 180m, while the chart had an accuracy of 500m.

The crew could have brought up data about the chart accuracy on the ECDIS display, including both horizontal and vertical accuracy, such as for submerged rocks.
But it was quite hard to understand how to use it, BSU says. 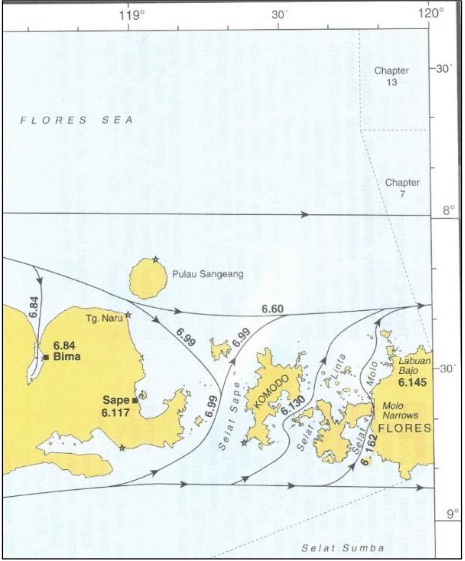 Chart p. 138 UKHO Sailing Directions NP34
The electronic version of the UKHO's3sailing directions available on board (e-NP 34, Indonesia Pilot Volume 2) states the following for the Selat Saperoute (6.99):
"The passage E of PulauBanta is navigable but is seldom used, other than by ferries and other local craft, as tidal streams are strong and fewer anchorages are available [...]."

If the vessel had been navigating with paper charts, the crew would probably have been more considerate of possible inaccuracies in the chart, and looked up all the “Sailing Directions” if the vessel was going to an area the master was not familiar with.

Or concerns about using paper charts in an unknown area may have led the crew to take on a pilot, who may have had his own accurate soundings map, or had better local knowledge, BSU said.

The relevant section of Sailing Directions for the strait between Komodo and Banta states "The passage E of Pulau Banta is navigable but is seldom used, other than by ferries and other local craft, as tidal streams are strong and fewer anchorages are available."

The Sailing Direction for the island of Tokohgilibanta states, "a drying rock, 1 mile farther NNW, is small and dangerous; the breakers on it being indistinguishable from the normal overalls and sea conditions in the area."
(Confusingly, on the ENC, the name of the island changes from Tokohgilibanta to Nisabedi when the viewer zooms in).
This description reflects the location of the rock where the vessel ran aground.

A digital version of these sailing directions would have been available onboard, but without any reference to the ENC, which would be required for the computer to connect them.

BSU says that the ECDIS could be described as "not fully engineered" - since it displaces sources of information such as paper sailing directions, without being a consistent replacement for them 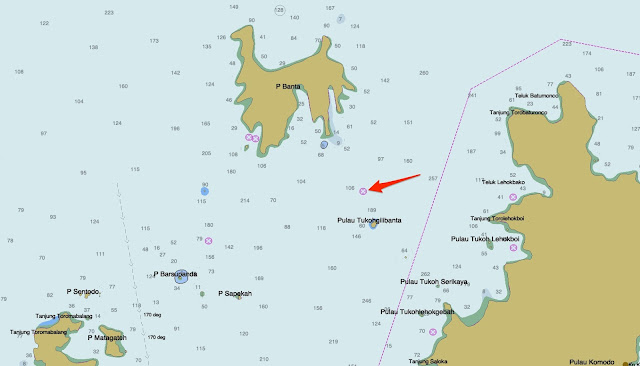 “Besides drawing on their experience, officers of the navigational watch therefore refer to sources of data other than the navigational chart. Paper charts and sailing directions have developed over centuries and became more accurate in many areas."

"Most of the world's sea areas are looked upon as being inaccurately surveyed, while paper charts only provide an indication of the data of a survey."

"The accident is therefore attributable to the ECDIS and settings specified," BSU says.

The vessel ran aground on a shoal between the islands of Komodo and Banta, Indonesia. 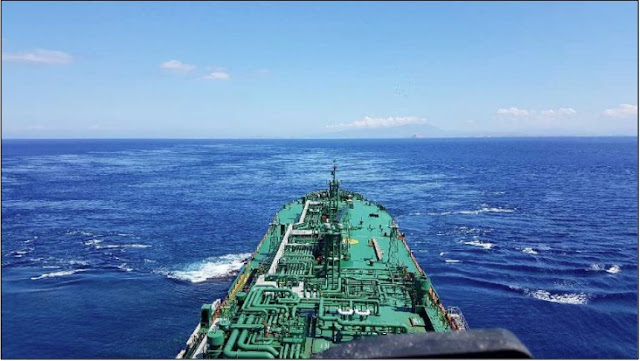 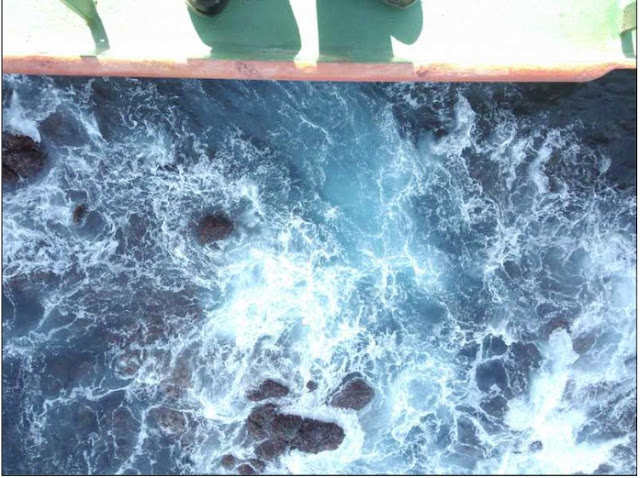 It was using a Transas ECDIS, with PassageManager software from ChartCo, with ENCs supplied by ChartCo using data from the Indonesian Hydrographic Office.
It was using voyage planning software "BonVoyage System" (BVS) from StormGeo.

BSU looked at the Indonesian and UK Hydrographic paper charts of the region.
The UKHO charts (both 1:500,000) show a "rock awash" symbol, meaning a rock submerged at high tide or temporarily.

The Indonesian smaller scale chart (1:200,000) shows a rock symbol without specifying whether it is sometimes submerged, while the larger scale Indonesian chart (1:50,000) shows a shallow area with water depth of 9m.
This chart was drawn from Dutch surveys carried out in 1904. 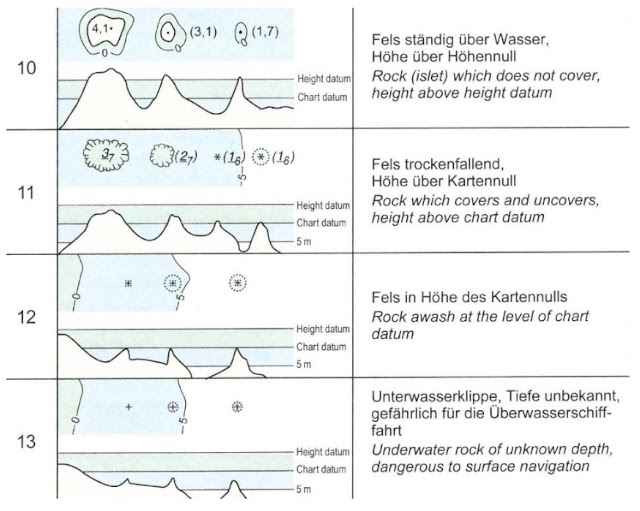 Proper rock designation in official paper charts according to INT1

The ENC shows the shoal 2 cable lengths (400m) from the scene of the accident, with a note saying, "underwater rock (always underwater / submerged 1 MAR 2017)". The general water depth around the rock is about 100m.

The reason for the discrepancy between the ENC and paper chart is not clear.

The ENC has a “Zone of Confidence Category C” (CATZOC) which means “a position accuracy of +/- 500m horizontally, and “full area search not achieved". This data could be fed into the ECDIS to illustrate the range of “cross track distance” needed.

IHO has a Data Quality Working Group looking at options for improve user awareness and presentation of quality data.
Posted by geogarage at 1:33 AM