Robots go their own way deep in the ocean 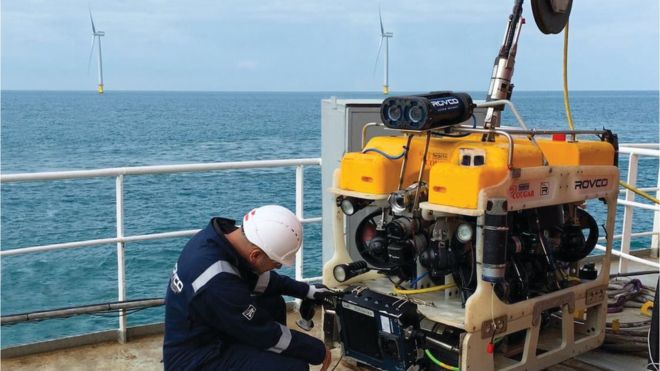 From BBC by Ben Morris

Firms like Rovco are trying to make underwater vehicles more intelligent
"It's very common," says Jess Hanham casually, when asked how often he finds suspected unexploded bombs.
Mr Hanham is a co-founder of Spectrum Offshore, a marine survey firm that does a lot of work in the Thames Estuary.
His firm undertakes all sorts of marine surveying, but working on sites for new offshore wind farms has become a big business for him.
Work in the Thames Estuary, and other areas that were the targets of bombing in World War 2, are likely to involve picking up signals of unexploded munitions.
"You can find a significant amount of contacts that need further investigation and for a wind farm that will be established in the initial pre-engineering survey," he says. 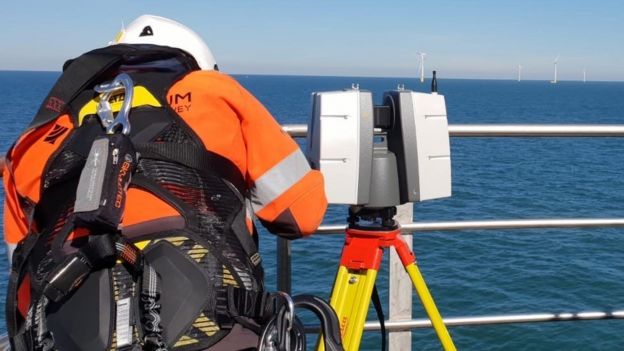 With that information project managers can decide whether to place turbines and other equipment a safe distance from the suspected bombs, or have them blown up by a specialist firm.

At the moment marine surveying is done by teams who go out on boats, collect the data and bring it back for analysis.

Sometimes that will involve a relatively small vessel with two crew members, a surveyor and his kit. But bigger inspection projects further out to sea can involve much larger boats, with dozens of crew members, costing in the region of £100,000 per day.

The sensor equipment varies according to the job.
Sometimes it might be a sonar array towed behind the boat, for other jobs it might be an underwater unmanned vehicle, which can be controlled by surveyors on the surface.

Bad weather can disrupt the work and make life uncomfortable.
"I've been at sea in force nine and force 10 gales and they're not nice places to work," says Brian Allen, chief executive of Rovco.

His company is one of several looking to disrupt that market using artificial intelligence (AI) systems. They see a future where underwater robots, known as autonomous underwater vehicles (AUVs), will be able to do the surveying work without much human oversight, and send the data back to surveyors in the office.

Bristol-based Rovco is working on key pieces of the technology.
It has trained an AI system to recognise objects on the seabed from data collected at sea, a process which took four years.
Adding AI means the data does not have to be analysed by a human on the ship, or taken back to shore for assessment.
That work is actually being done there and then by the AI, which can operate on the ship, or soon on the underwater robot itself.
"Without AI autonomous underwater robots are pretty dumb - only being able to follow pipelines and cables in pre-programmed lines," says Mr Allen.
"Enabling the AUV to analyse data in real time means you can actually instruct the robot to do other things. If you come across a problem, the survey can be stopped, and more data collected, with the robot making decisions for itself," he says.
So, for example, if the AI flagged up something that looked like an unexploded bomb it could stop, go back, and do further analysis. 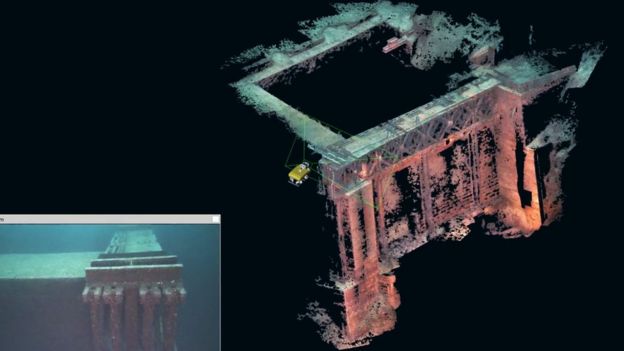 For some jobs, like dismantling underwater oil and gas infrastructure, engineers need to know the exact dimensions and locations of the equipment.

To help with this Rovco has also developed a vision system that produces accurate maps of underwater infrastructure.
The system generates a 3D cloud of individual data points, a format used in modelling software like CAD.
It combines those points with camera images to generate a realistic 3D reconstruction.
Rovco is currently bringing together the vision system, the AI and the underwater vehicle into one package.

Other companies are also racing to introduce AI into the industry. 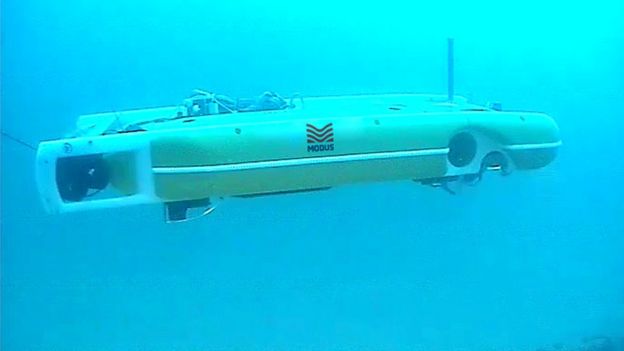 Jake Tompkins is the chief executive of UK-based Modus, which owns a fleet of 12 unmanned underwater vehicles. It is about to start a two-year programme with Durham University to develop an artificial intelligence control system that would allow some of its underwater vehicles to recognise their location, objects and anomalies during a survey.

He says that combining with Durham is a very efficient way to develop the technology, because they already have proven AI systems for the car and aerospace industries.

Using autonomous subsea robots to survey the seabed and inspect underwater structures would be a "game changer", according to Mr Tompkins and should "significantly" cut costs.

He thinks it won't be long before underwater robots will be stationed out at sea, perhaps at an offshore wind farm, or at an oil or gas facility.

When needed, they will be woken up and sent to harvest data, which will be sent back to an onshore control centre for processing. 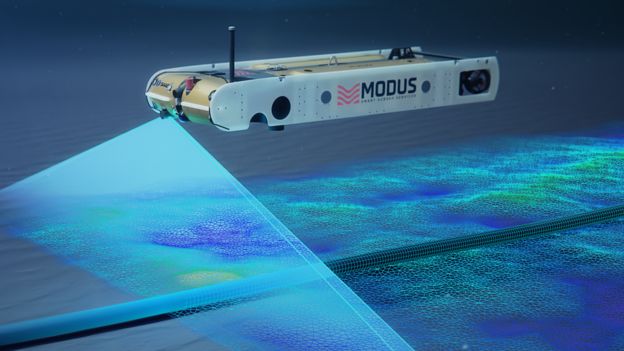 "I think we're probably two or so years away from the first commercial deployment of field-resident autonomous vehicles, but that is certainly where we are heading," says Mr Tompkins.

His company is currently working on ways to keep the AUVs charged while they are out at sea and on technology that allows them to send back data.

There is a juicy prize for the firms that can make such intelligent underwater robots work. Over the next decade the offshore wind market is expected to see "quite extraordinary" growth, according to Søren Lassen, head of offshore wind research at the consultancy Wood Mackenzie.


At the moment only six countries have a commercial-scale offshore wind power industry.
In 10 years' time, he forecasts that 20 countries will have joined that club. 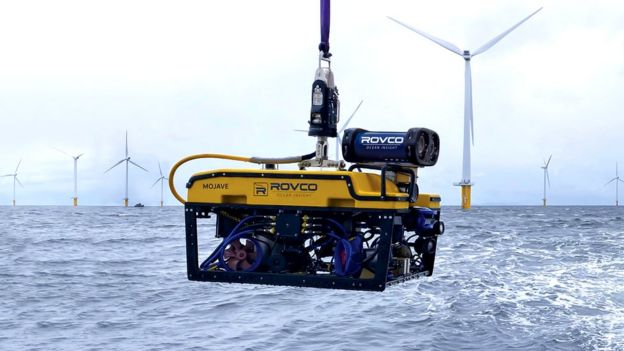 Last year 29 gigawatts of offshore wind capacity was connected to electricity grids around the world.
In 2029 Wood Mackenzie forecasts that number will hit 180 gigawatts.
That will involve building thousands of wind turbines and laying thousands of kilometres of cable to connect up those wind farms and all of that will need the services of underwater surveyors.
By 2029, much of that work at sea might be done by autonomous systems, with humans back at the office.

Jess Hanham will keep his business up to date with the latest technology, but fears the work will become less rewarding.
"I love the variety. For me being stuck in the office - I'd hate that. Going out and doing survey work, coming back and seeing the whole thing from start to finish - it gives you ownership of the work. I thoroughly enjoy that. If we were to lose part of that, I think that would be a real shame."