'I'll die with no regrets': risking their lives in Mediterranean 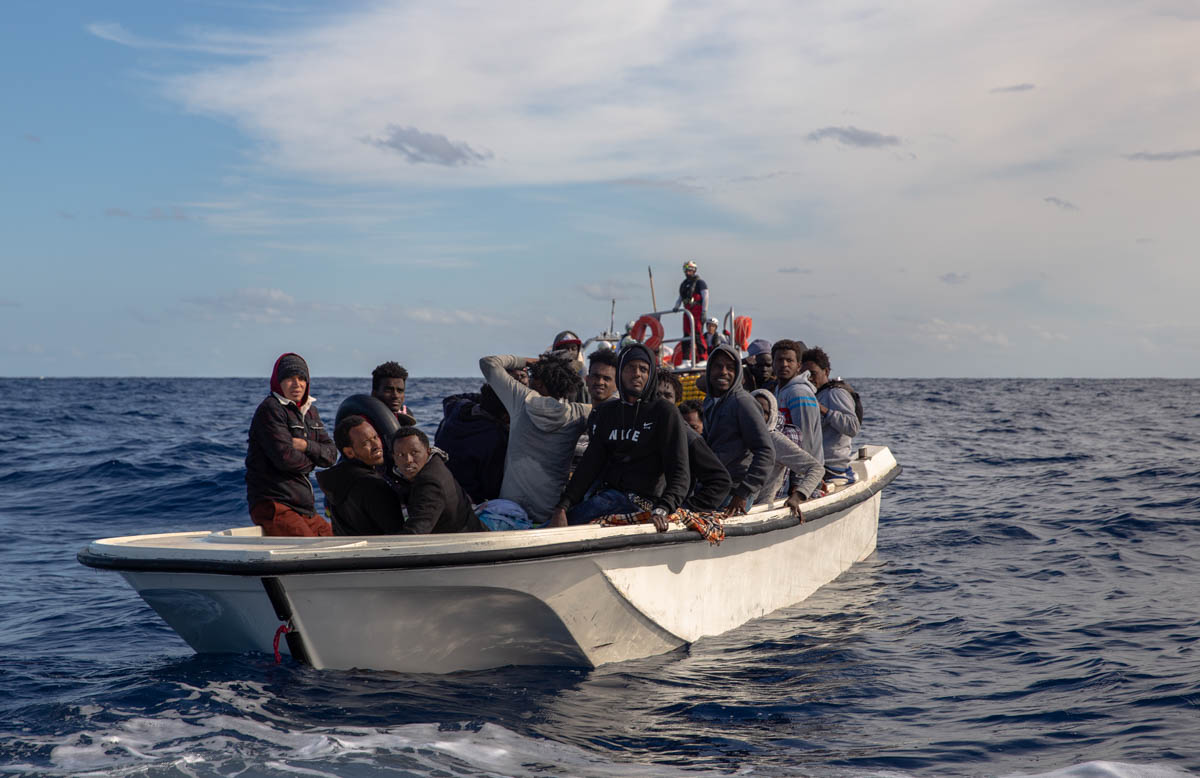 People are told to board the boats in the middle of the night. "You can't see anything. It's dark and scary. But you know you'll die in Libya if you don’t leave," Saruna, 17, said.
"You call home before you leave. You don't know if you'll survive at sea. You just pray to God and go."

From AlJazeera by Faras Ghani

Libya acts as a major gateway for African refugees and migrants.

There are currently more than 636,000 refugees and migrants in Libya, mostly from neighbouring countries and sub-Saharan Africa, according to the International Organization for Migration (IOM).

These people are often fleeing poverty, conflict, forced labour and other threats to their lives and wellbeing.

Many suffer abuse and extortion en route and their arrival in Libya rarely marks the end of the dangers they face.

"You see this," Karim, a rescued migrant, told Al Jazeera while pointing to his shoulder.

"This is where a Libyan stabbed me when I asked for money for the work I did for him.”
He then pointed to his right leg.
"This is where I was shot while waiting for work in Tripoli. There is complete lawlessness there. Everyone has guns and knives. There are no rights for black people, even someone who has been stabbed or shot."

Names have been changed to protect identity* 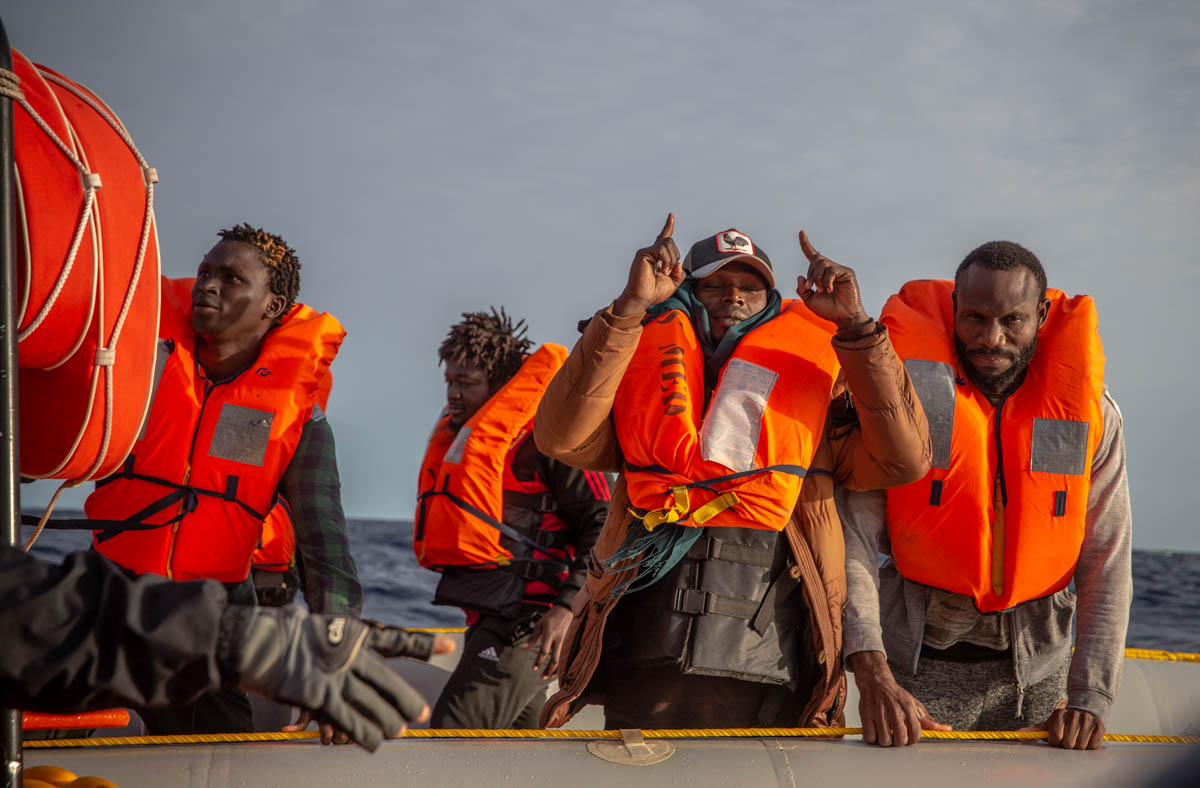 "In life when you've lost everything, you're not scared of anything any more," said Saou, sharing his reasons for getting on a boat for a journey that could have well been his last.
In addition to the deaths, almost 9,000 people were intercepted by the Libyan coastguard and returned to detention centres last year. 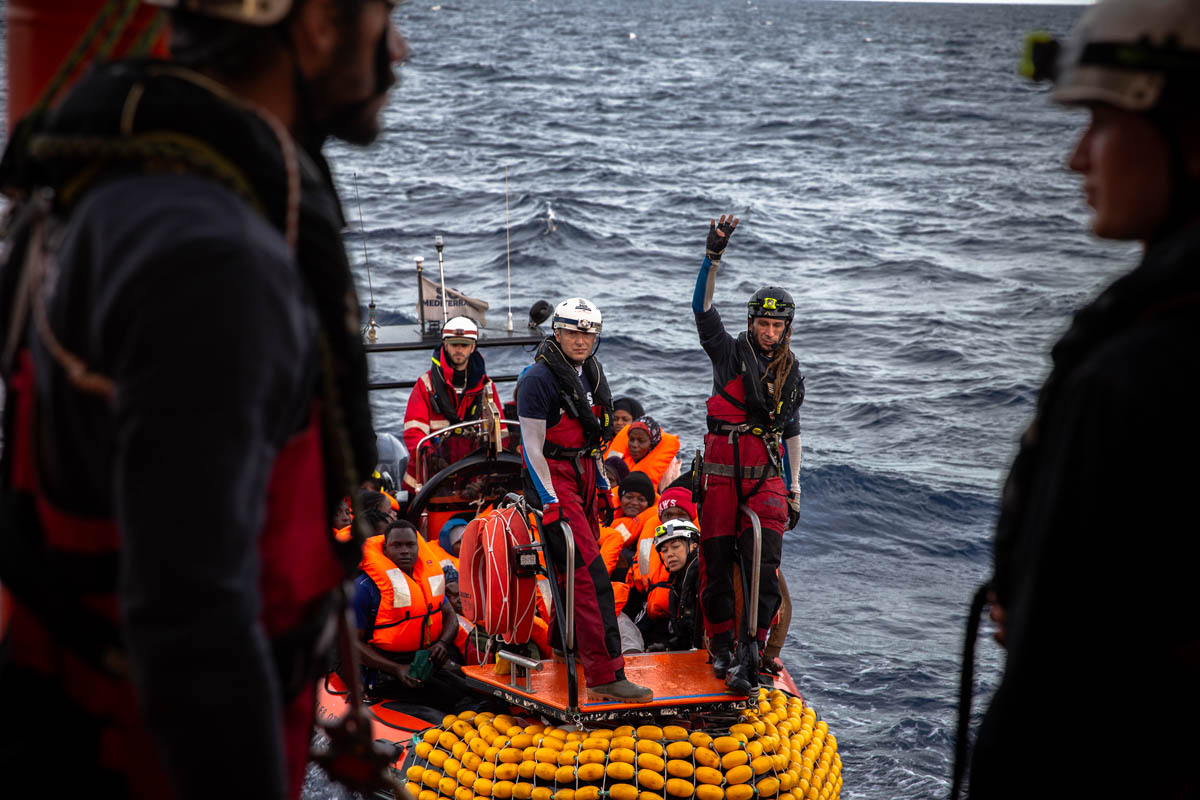 More than 110,000 migrants and refugees arrived in Europe by sea last year but 1,283 of those who left North Africa died in the Mediterranean after managing to flee Libya.
"It seems there's complete disregard for human life and people dying on the Mediterranean," said Nicholas Romaniuk, a search and rescue coordinator on board the rescue vessel Ocean Viking. 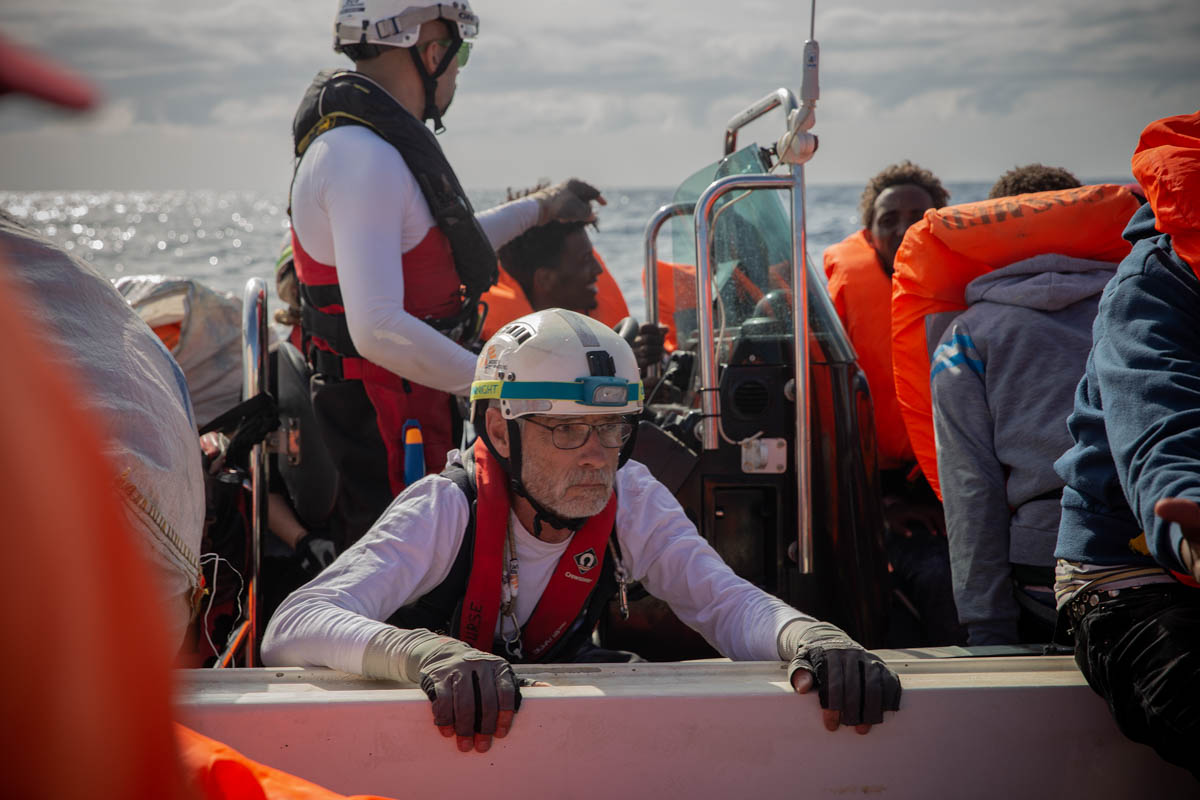 The UN has warned "there will be a sea of blood" without the intervention of rescue NGOs in the Mediterranean.
Since it began its operations in August 2019, the Ocean Viking has managed to rescue more than 1,100 people.
But in the past, ships have been accused of trafficking people into Europe and some rescuers faced up to 20 years' imprisonment in Italy after they were accused by officials of assisting traffickers and aiding illegal immigration. 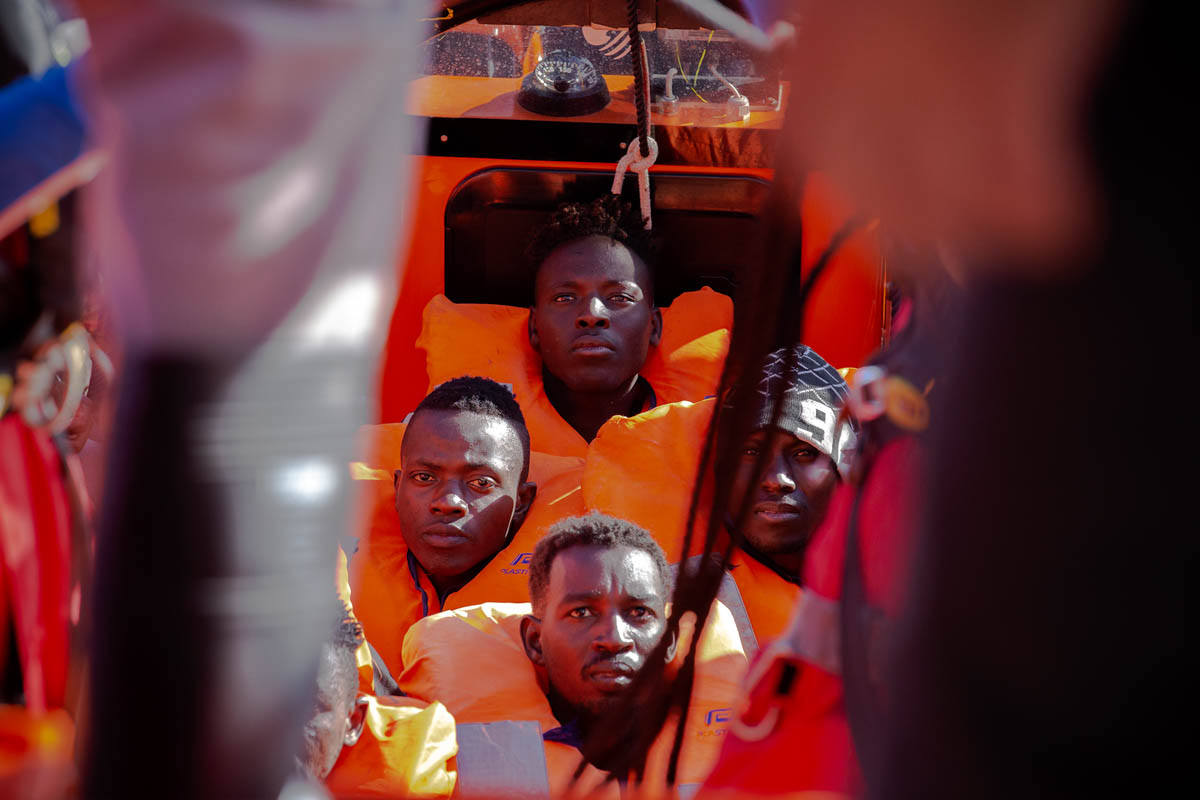 Relieved migrants and refugees shared stories of abuse and extortion in Libya, where some people Al Jazeera spoke to spent almost five years.
Medics reported seeing cases of electrocution, wounds by knives and machetes, gunshot wounds and people beaten with rubber and metal pipes.
"You don't see the waves. You just see a boat. And that's your chance to get your freedom again, far away from Libya," said Saou, from the Central African Republic. 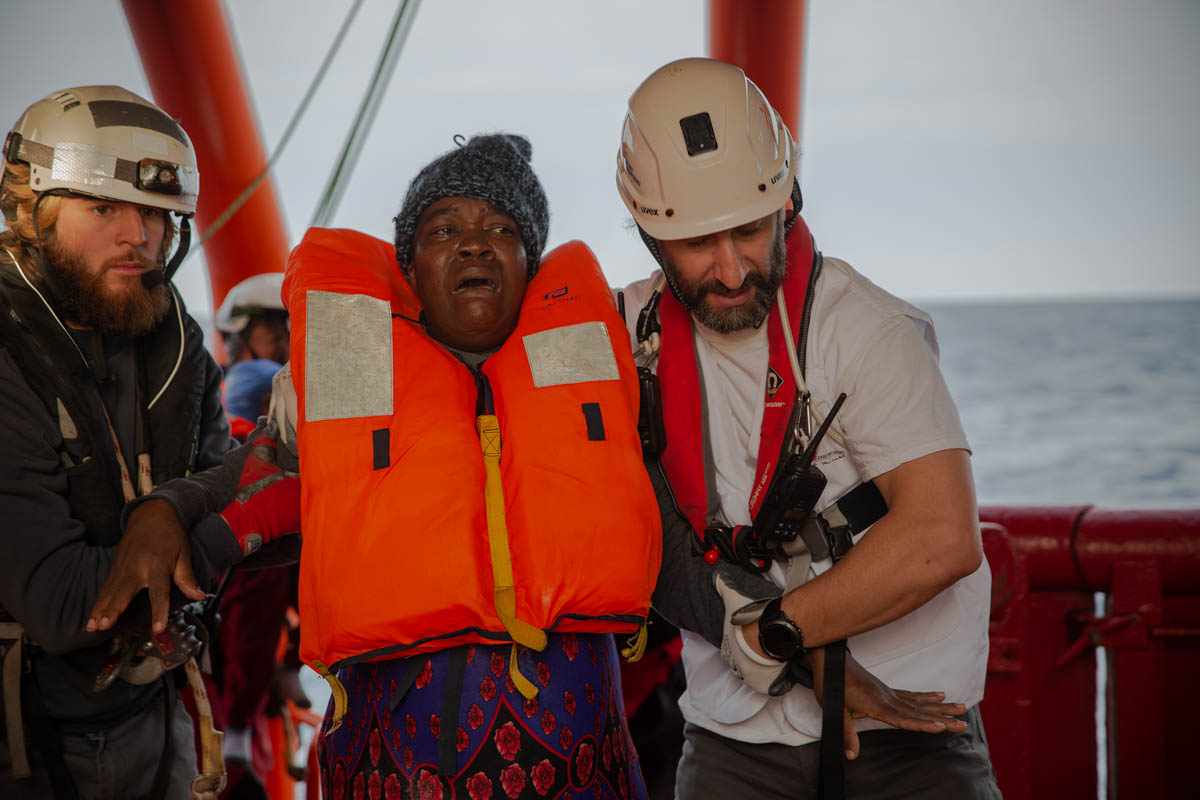 The IOM estimates that 10 percent of the migrants present in Libya are women.
"Migrants smuggled into Libya reported severe human rights violations and risks that included rape and amounted to deaths during these journeys," the organisation told Al Jazeera.
Kelly, 32, boarded a flimsy rubber boat to flee Libya while she was eight months pregnant with twins.
"I didn't want to get into the water. It was too risky. I thought the journey wouldn't finish and I'd die," she said after being rescued in November.

There are almost 45,000 child migrants currently in Libya, more than a quarter of whom are unaccompanied.
Some adult migrants are forced to leave their children behind when leaving their country of origin.
Some female migrants are raped during their journeys and give birth en route to Libya or once they arrive there. 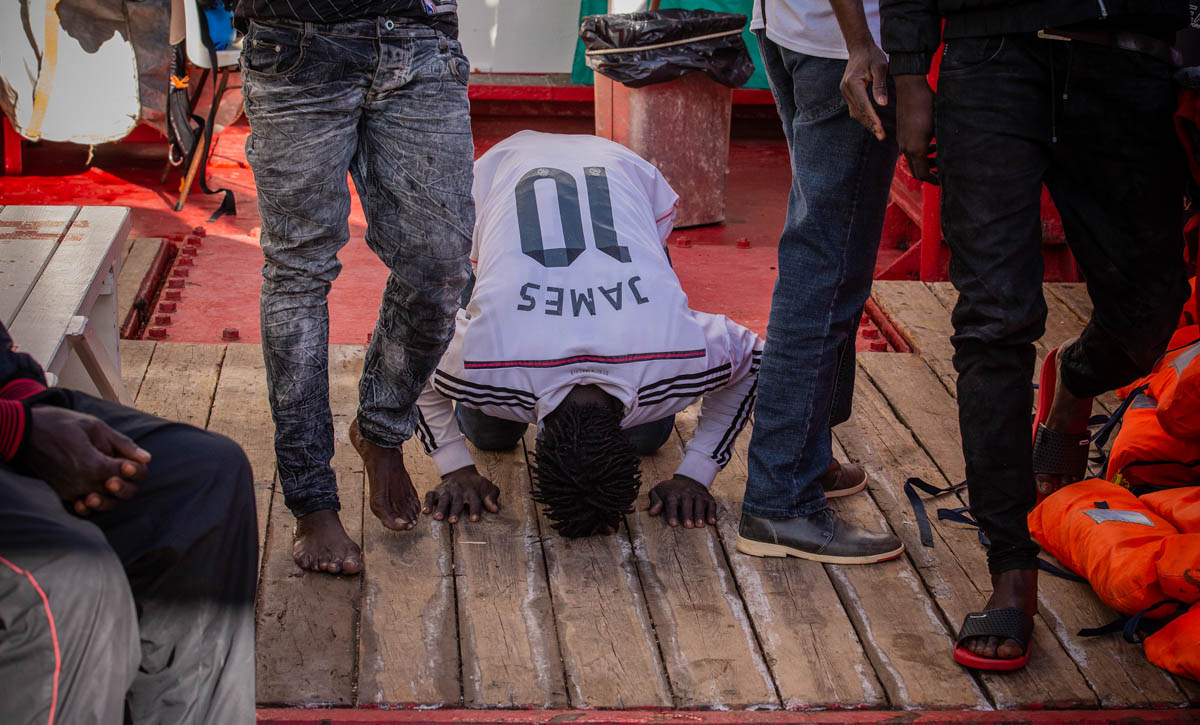 Being rescued by an NGO vessel takes these people closer to their dream of reaching Europe.
While the journey is not complete and asylum in Europe is not guaranteed, they say that after being rescued, they feel the safest they have felt since leaving home.
"If the Libyans [coastguards] come on board right now, I will smash my head into the wall, slit my throat and jump into the water. That will be so much better than going back to Libya," Florent, from Cameroon, said. 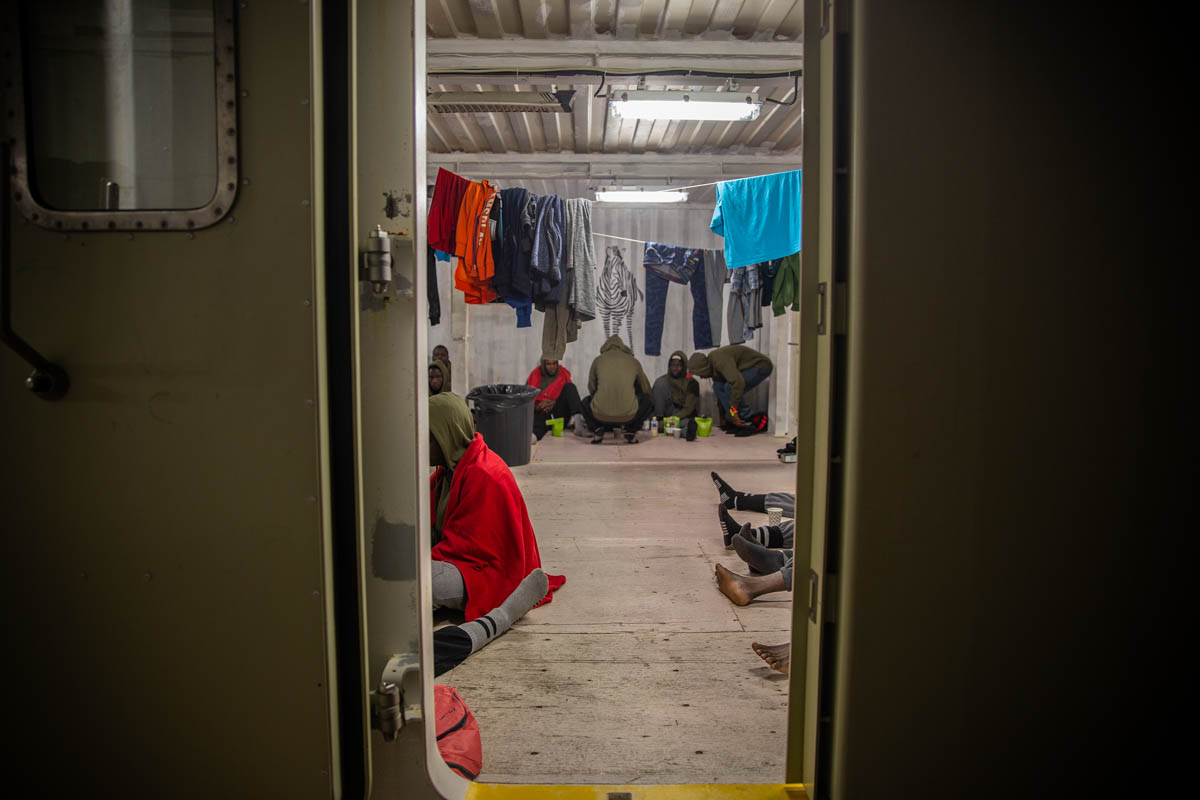 "Being able to sleep without fear of being woken up by gunshots or being kidnapped for ransom time and again is a blessing," one of the rescued migrants said.
Others said it was a huge relief to get warm meals, to be able to clean themselves and have people to talk to.
"I started to cry when the rescuers told us they weren't from Libya. I couldn't believe that I was going to be rescued and not going to die in the sea." 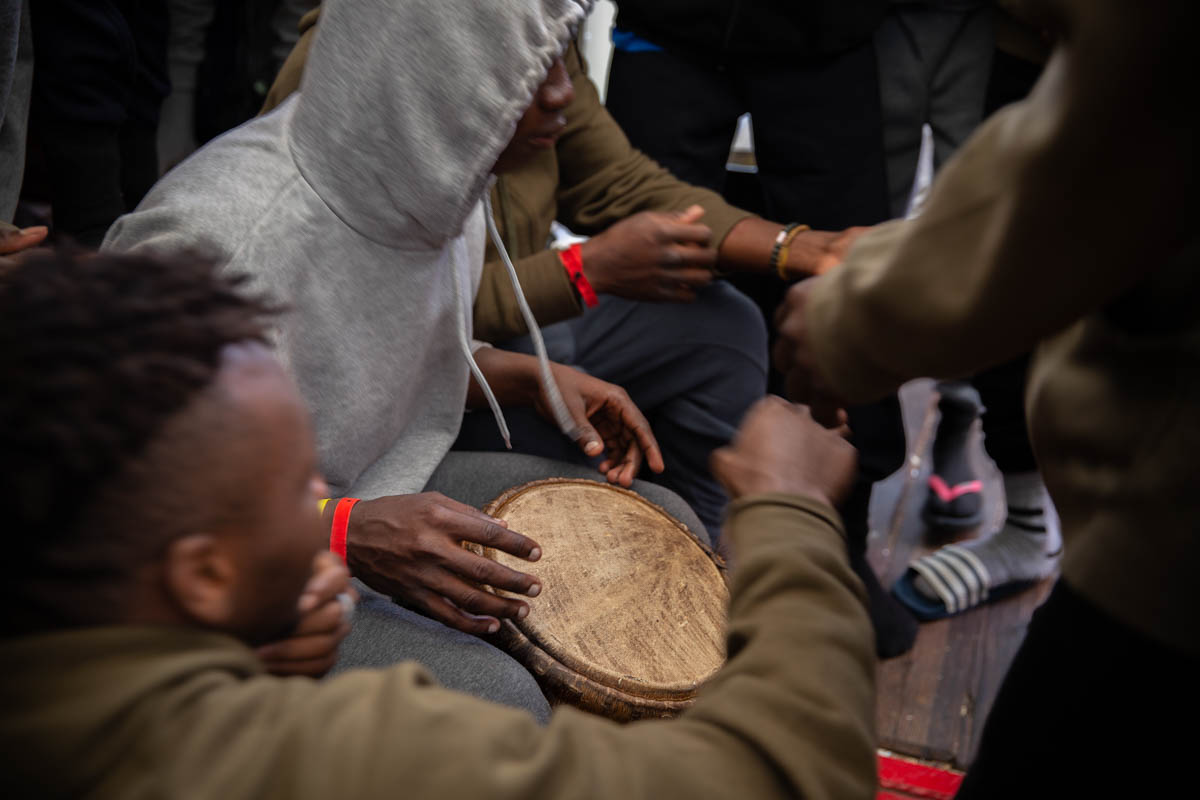 Despite their traumatic experiences and arduous journeys on land and sea, the refugees and migrants remained hopeful of their pain transforming to joy once they reach the "safety of Europe" and are able to provide for their families back home.
"My father is dead, my mother is dead. It's just me and my wife and I left Nigeria because I didn't have anyone or anything left anymore," said Sondy, 37. 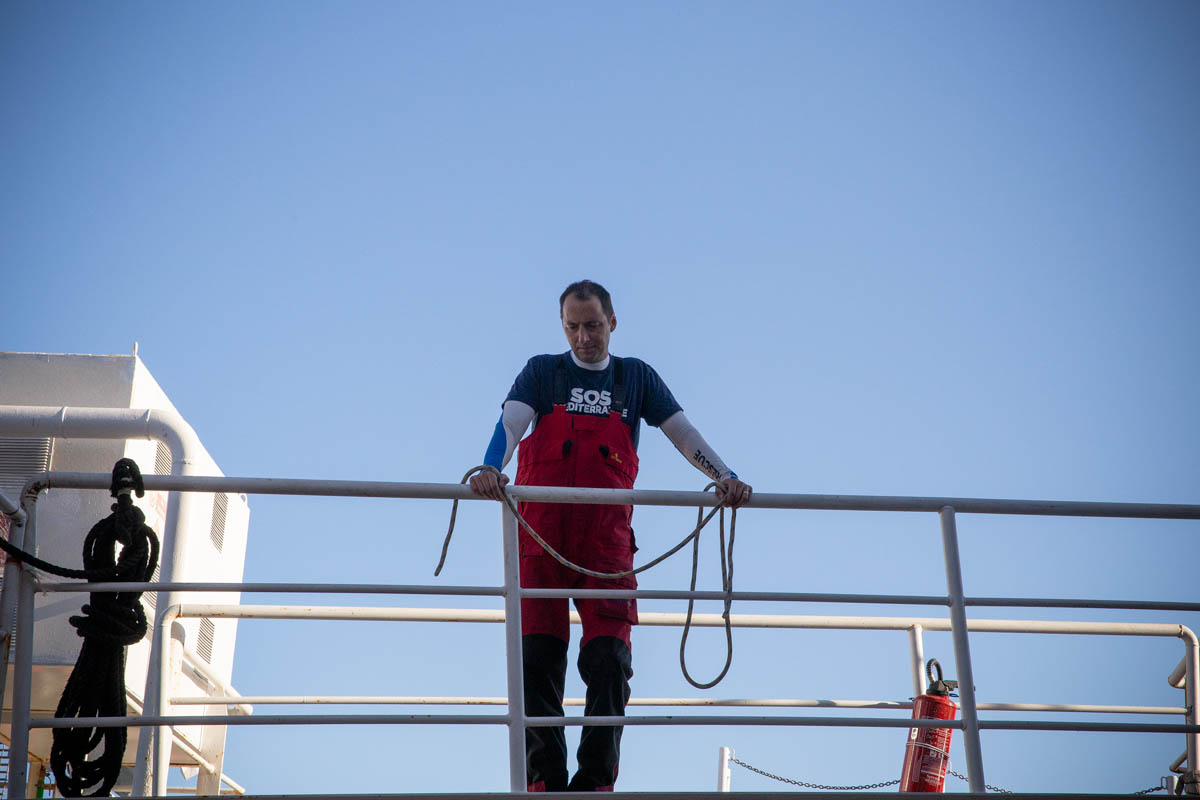 For the rescuers, especially those who have seen a rescue situation change from stable to deadly in a matter of seconds, the job is not easy.
Rough seas, testing conditions, and the urgency and unpredictability of the situation make it difficult.
"We are rescuing people because they have a right to be rescued," said Dragos, a rescuer from Romania.
"If you find a horse or a cow in the water, you will rescue them because they are not supposed to be there." 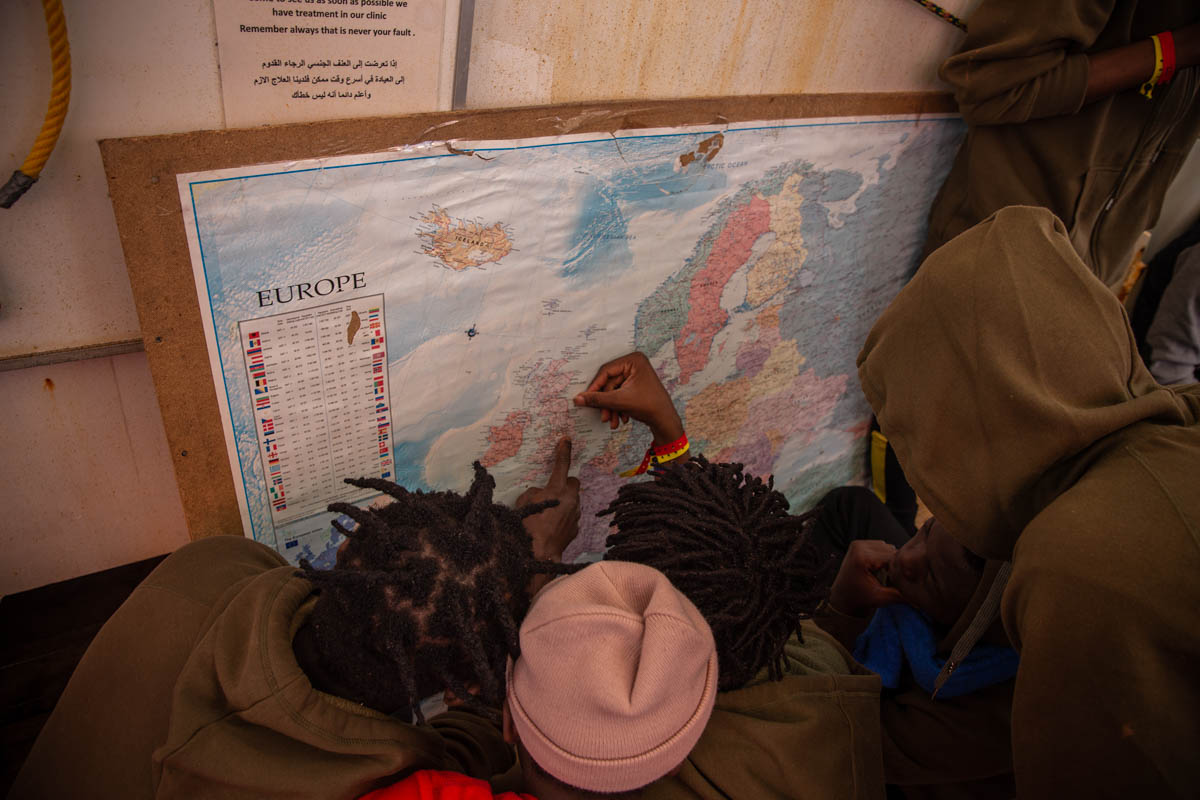 Leaving on a boat, most of the refugees and migrants do not know how far it is to Italy from Libya.
Some are told by the human smugglers that it is only a small river they have to cross, the smugglers pointing to lights on offshore oil rigs - just over 100km (62 miles) away - and saying that is their destination.
Here, rescued people talk about the countries in Europe they heard about and how the distance to Europe seems very small but the journey very long. 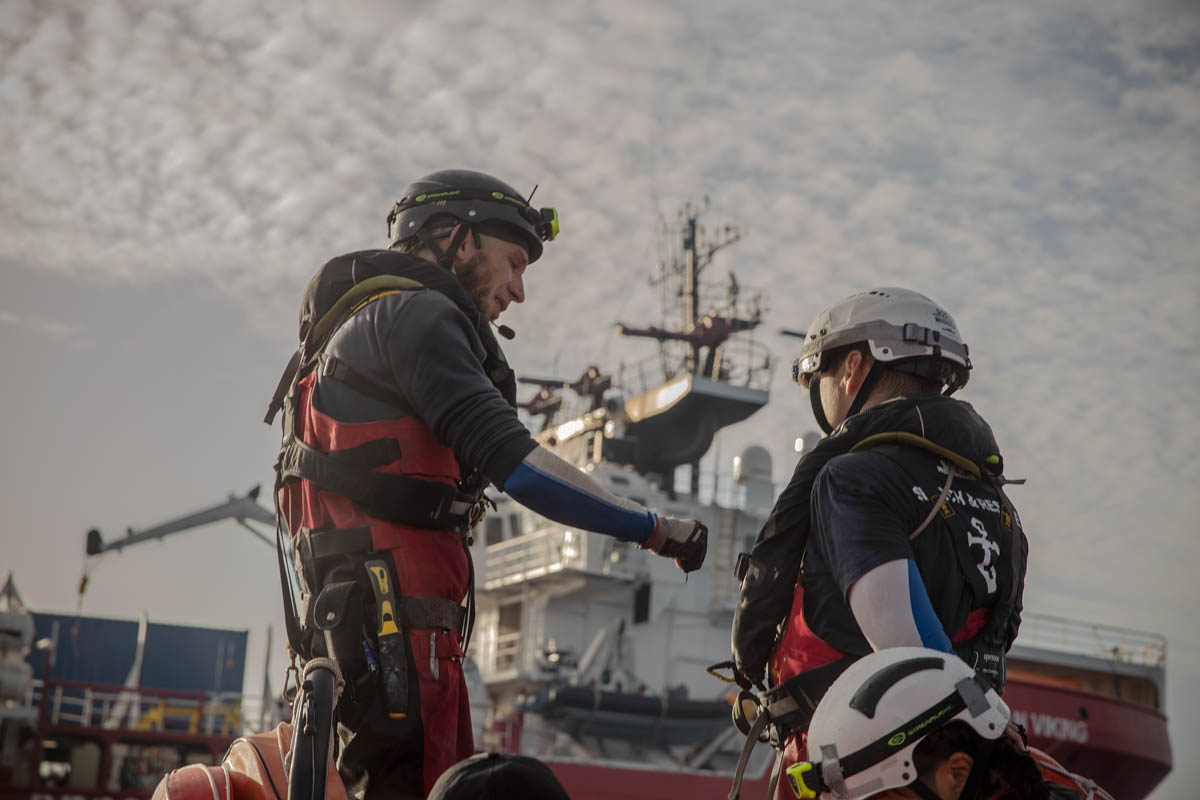 "When I was a firefighter or rescue soldier, nobody questioned my mandate. Now that I'm still saving lives, the work is questioned and even criminalised. I'm just a f****** rescuer trying to save lives," said Tanguy.
Rescuers talked about their constant high levels of stress and their fear that a rubber boat may fall apart in front of their eyes.
"We deal with some very traumatic experiences at sea. And that leaves a mark," said Nicholas Romaniuk, a search-and-rescue coordinator. 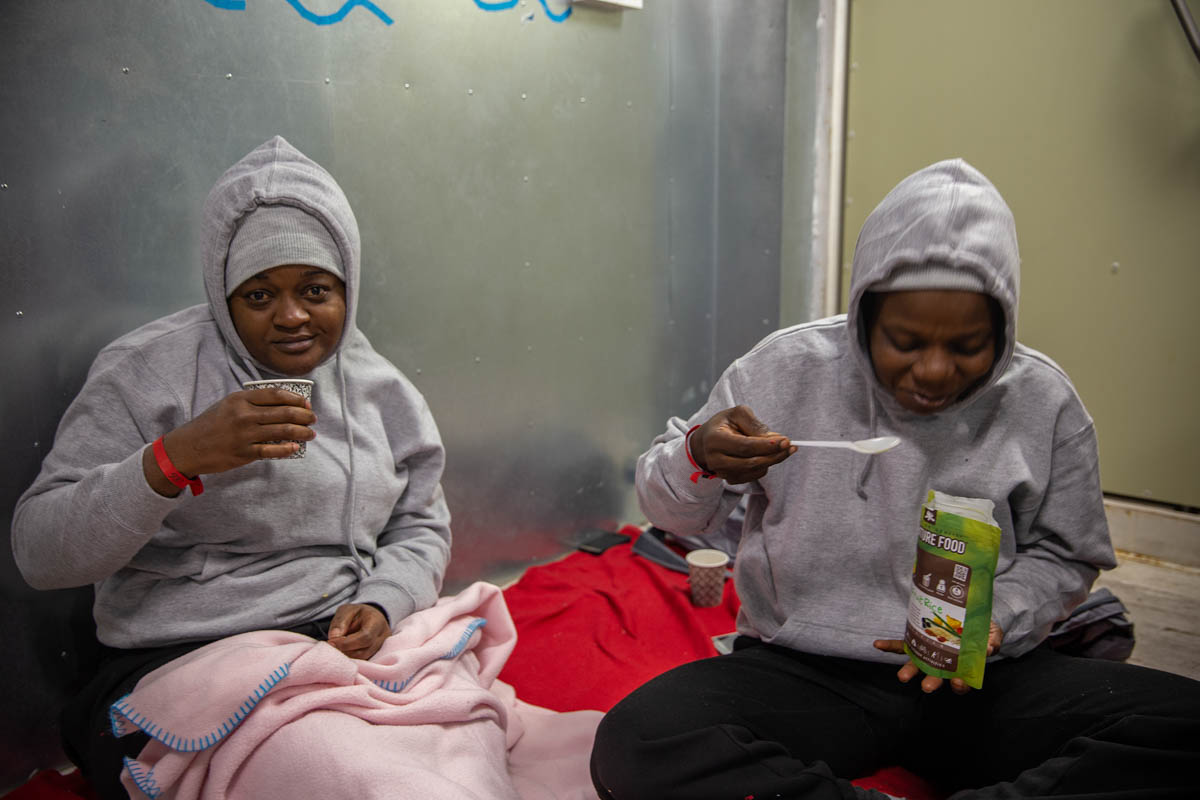 Rescued female migrants told tales of physical and sexual abuse that began even as they were setting out from their home countries.
On their way to Libya, many were tortured and raped.
After arriving in Libya, they found physical and sexual violence everywhere: on the streets and during their forced work as cleaners.
Some women said their genitals had been burned. 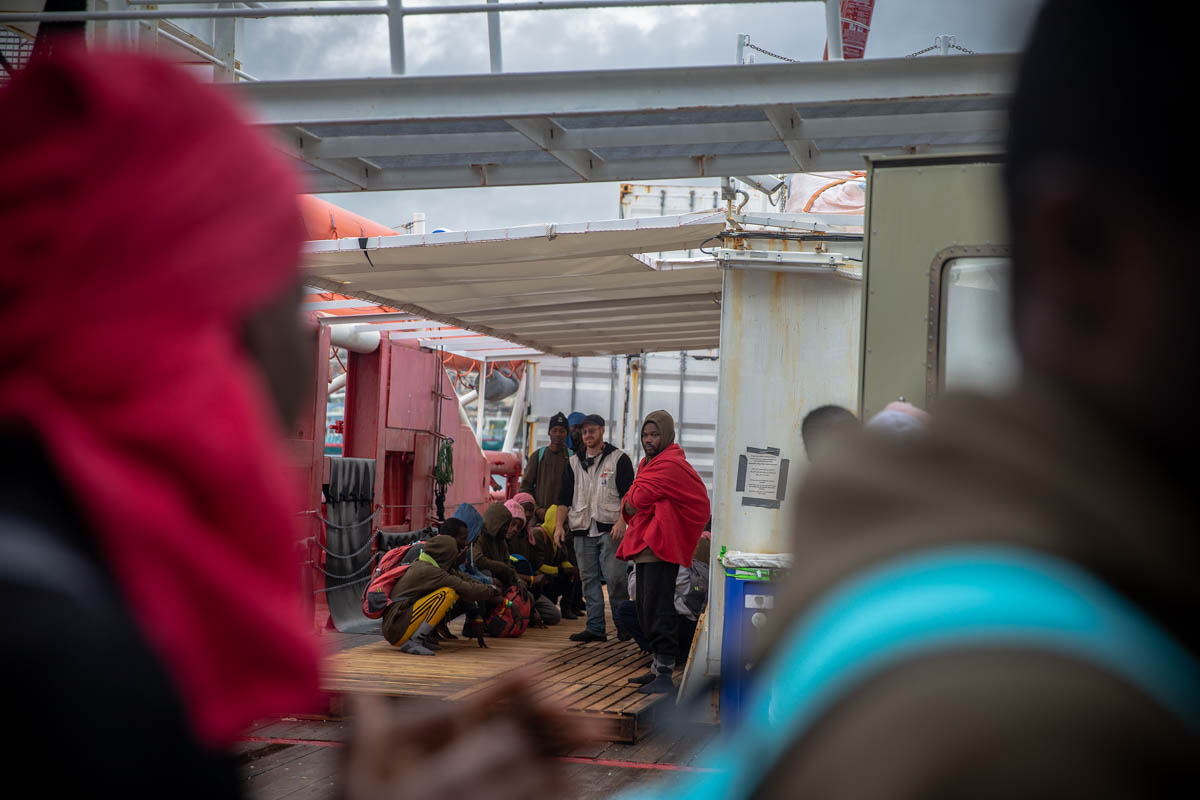 As the rescued people prepare to disembark in Europe, they realise stern tests await them in front of immigration officials and that their journey is not over.
More than 5,000 migrants were forcibly repatriated by Italy in 2019.
For those who are returned, the violence, torture and extortion they endured on their journey was for nothing.