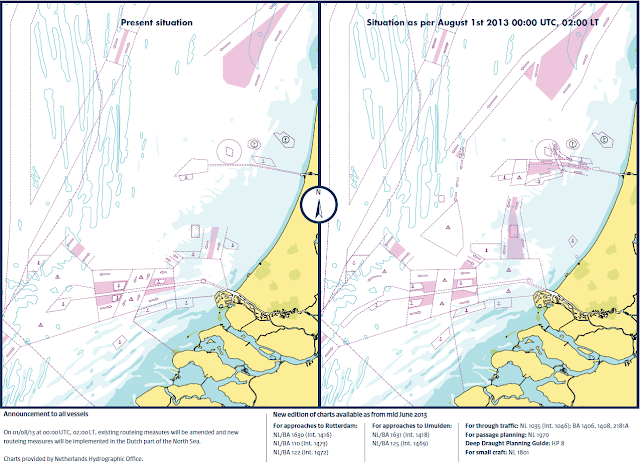 Large change in the various Traffic Separation Schemes of the southern Nortsea (NAV58)
Note : at this date, the Marine GeoGarage has not received and integrated the updated 1801 map

The North Sea is becoming increasingly busy: there is more shipping traffic, offshore wind farms are being built and there are oil and gas platforms.
As of 1 August 2013, the Dutch Ministry of Infrastructure and the Environment (Rijkswaterstaat) will change shipping routes on the North Sea to ensure the future safety of shipping.
It will be one of the most extensive operations to change routes in the world to date. 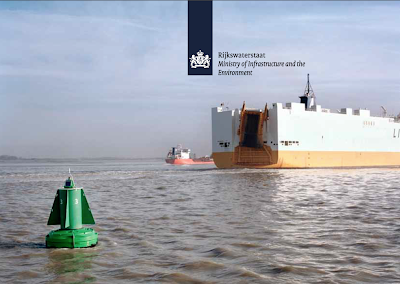 As on land, the North Sea has a system of highways, but for shipping.
There are various waterways for through traffic from north to south and vice versa and waterways to the ports of Amsterdam and Rotterdam.
Ships can park at sea in anchorage areas.
In the new situation, routes will be located further from the coast and the routes will intersect each other less often.
A traffic separation scheme will be introduced in the approaches to IJmuiden to ensure that vessels sailing in opposite directions have their own sea lane.
Anchoring areas will also be relocated and the space around objects such as oil and gas platforms will be reconfigured.

Safe distances
The changes will optimise the safety of shipping, improve the access to Dutch ports and allocate North Sea space more efficiently.
The new routes will ensure that ships can maintain an optimal, safe distance to future offshore wind farms and oil and gas platforms.

International agreements
The optimal shipping routes were determined by the initiators of the offshore wind farms together with the ports of Rotterdam and Amsterdam.
A proposal was then submitted to the IMO, International Maritime Organization.
This UN organisation ensures that participating countries agree to make shipping as safe and environmentally friendly as possible.
The Dutch plans were approved by the IMO on 29 November 2012.
Also involved in the changes are the Netherlands Coastguard, the Hydrographic Service, Maritime Pilotage, ship-owners, and fishing and mining organisations.

Introduction
The new routes came into force on 1 August 2013 at 02:00 local time.
The change from the old to the new situation was a complex operation that had to take place in a few days.
Over the past months, both national and international users of the North Sea have been informed of the changes.
Furthermore, nautical charts were revised in June.
On 30 and 31 July, all buoys in the North Sea were relocated to mark the new shipping routes. Rijkswaterstaat has deployed extra vessels to further assist marine traffic in the new situation.
In addition, the Netherlands Coastguard will be ready to help from the Coastguard Centre or from the air. 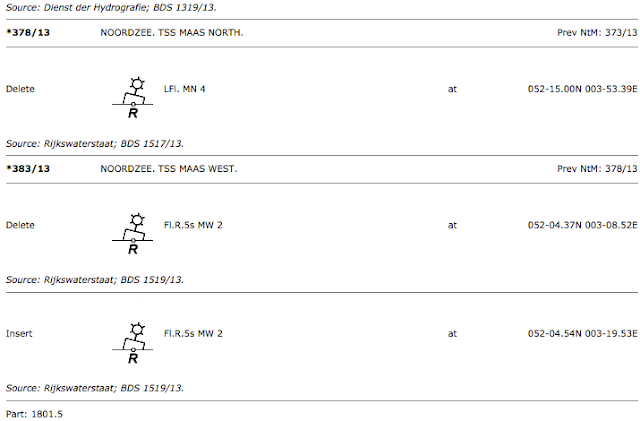 The NLHO has published the corrections in NL NM :
(see www.defensie.nl/english/navy/hydrographic_service/ntm/ntm-database/weeklyoverview, Week 31 of 2013)
and contacted the Coastguard to issue a radio warning.