Scientists set off today on a 21-day voyage to map a previously uncharted section of the Colville Ridge, a large and mountainous seafloor structure about 500km northeast of Auckland. More than half of the Colville Ridge, which covers an estimated 100,000km2, sits within New Zealand’s Exclusive Economic Zone yet until the last few years very little was known about it.

Being undertaken by GNS Science, the voyage will take place on NIWA’s deepwater research ship Tangaroa as part of a long-term programme to survey regions within New Zealand’s offshore territory.

Scientists will use the ‘holy trinity’ of seafloor mapping techniques – sonar mapping, as well as measurements of gravity and magnetism, supplemented by seafloor rock sampling.
These techniques complement each other and are considered essential to obtaining meaningful information about the seafloor and its underlying geological structures. 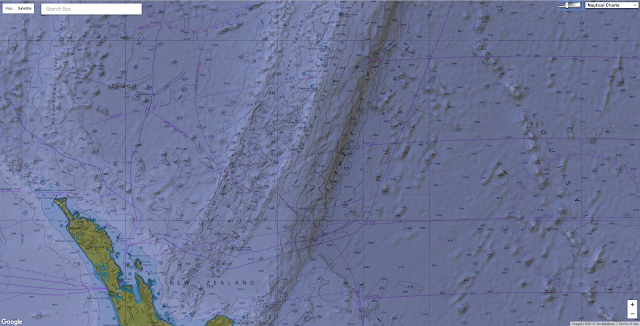 The mission builds on two earlier voyages, in 2013 and 2015, that mapped southern parts of the Colville Ridge totalling 40,000km2.
The maps produced during these voyages show a vast mountainous ridge dotted with extinct volcanic cones and peaks rising 1.5km above the surrounding seafloor.
Co-chief scientist on the voyage, Fabio Caratori Tontini, said the crew was looking forward to discovering the submarine landscape of the northern part of the ridge.

The voyage will produce the first comprehensive, high-definition seafloor map, geophysical data sets and rock samples along the northern section.
The information will provide new knowledge and understanding about the region’s ancient volcanism.


A large area of seafloor east of Auckland has thrown up a few surprises for scientists.
Little was known about the submerged Colville Ridge until two weeks ago when 17,500 square kilometres of it was mapped in detail for the first time by a research ship.
That is an area equivalent in size to Auckland and Northland combined, or just over half the size of Belgium, or about the same size as Kuwait or Swaziland.
It is cut by large faults and has volcanic cones sitting atop of the ridge.
From the bottom of its valleys to the top of its peaks measures about 2km...
source : (GNS Science, 2013)

The Colville Ridge is millions of years old and represents a key piece to better understand the geological puzzle of the region, which includes determining the role of plate tectonics in shaping the ocean floor in the northern part of our EEZ.

Christian Timm, the other co-chief scientist on the expedition, said that understanding the formation of the Colville Ridge would give scientists valuable information to improve the understanding of the tectonic evolution of New Zealand’s vast underwater estate.
“Together with the data from the two previous expeditions, we will have acquired new maps covering about 60,000km2 of ocean floor, which is equivalent to the size of Ireland or half of New Zealand’s North Island,” Dr Timm said.
“These surveys will allow us to strip away the seawater and view New Zealand’s stunning underwater landscape in 3D. The new data will provide a framework for future studies that will include the deployment of underwater craft such as autonomous underwater vehicles (AUVs) and remotely operated vehicles (ROVs) to explore the seafloor in more detail,” he said.

The older Colville Ridge and neighbouring Kermadec Ridge have formed as a result of subduction of the Pacific tectonic plate underneath the Australian plate.
Both ridges stretch northeast from New Zealand towards Fiji and Tonga respectively.

There are four or five major ridge features in New Zealand’s offshore territory and the Colville Ridge is arguably the least known of them.

The voyage draws on Ministry of Business Innovation and Employment funding for the Tangaroa, while funding from GNS Science covers equipment and scientific staff on the vessel.