From NZHerald by Jamie Morton

Scientists have mapped in stunning detail a huge area of seafloor northeast of Auckland - equivalent to the size of Israel - and revealed more insights into New Zealand's vast and varied underwater backyard.

A three-week mapping mission around the Colville Ridge, estimated to cover 100,000 square kilometres and stretching from within 500km of Auckland, found that some seafloor rocks in the area had been hydrothermally altered.

This meant hot fluids containing dissolved elements such as silica had once passed through them, and often these same fluids dissolved metals that ended up accumulating on the seafloor. 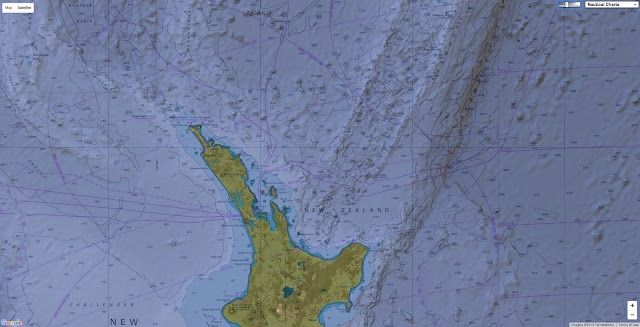 Colville Ridge  in the GeoGarage platform
The deep, rough seabed between the Colville and Kermadec ridges (north of New Zealand) is known as the Havre Trough.
Here the seabed is slowly being pulled apart – the ridges are moving away from each other.
The older Colville Ridge has extinct volcanoes, while the younger Kermadec Ridge has many active volcanoes.

GNS Science scientist Dr Cornel de Ronde, who arrived back in Devonport today aboard NIWA research vessel Tangaroa, said this find indicated that parts of the submerged ridge could be prospective for metallic minerals such as copper and gold.
"This find is a real bonus as our mission was to produce a detailed bathymetric map of the area, backed up by gravity and magnetic measurements."

Dr de Ronde and his team used a combination of mapping techniques, including solar mapping and magnetism and gravity measurements, to build a detailed picture of the seafloor and its underlying structures.
They were able to create a high-definition map with a resolution of 30m, which was 30 times better than a previous map of the area compiled from satellite data.

The shallowest point was just 390m below the surface, while the deepest was 3,730m.
"A dominant feature of the area we surveyed is a large mountain chain that when viewed from the northwest looks almost like an alligator snaking its way towards Auckland," he said.
"We believe this survey will show that the Colville Ridge and Kermadec Ridge were once joined and they rifted apart at some unknown time in the past."

The older Colville Ridge and neighbouring Kermadec Ridge - which stretch northeast from New Zealand toward Fiji and Tonga respectively - had formed as a result of subduction of the Pacific tectonic plate.

Scientists now plan to review the gravity and magnetic data and analyse the rocks they recovered from the seafloor, which will tell them more about how and when the Colville Ridge formed and when the two ridges rifted apart.
Dr de Ronde said it was amazing to think that so little was known about the Colville Ridge.
"The southern end of this large geological feature lies within 500km of New Zealand's largest city, and yet prior to this mapping expedition and the one we completed in 2013, we knew almost nothing about it."

There were four or five major ridge features in New Zealand's offshore territory and until now Colville was arguably the least known of them, he said.

Together with geophysical data, the new maps would be valuable as a guide to future voyages, which were likely to focus on particular areas for more detailed investigations.

The voyage was the latest in an ongoing Government-funded programme to survey regions within New Zealand's offshore territory considered prospective for seafloor minerals.

When the 20,000 square metres of new mapping was combined with a similar survey of the southern part of the ridge in 2013, GNS Science could now boast having detailed 38,000 square kilometres of previously unmapped territory.

Bathymetric map of all available multibeam data as of 2009 for the Southern Havre Trough, between the Colville and Kermadec Ridges and N of the New Zealand's North Island.
In the colored version of this figure, the bathymetry key (in meters) ranges from red at the surface to purple at depths of 5 to 6 km.
The location of Rumble III submarine volcano is highlighted.
The inset indicates the tracks and areas of individual surveys whose data comprise the map.
Areas that are not covered use satellite data configured to fit the edges of multibeam data set. Courtesy of Wysoczanski and others (2010).
other view

September 2013: NIWA scientists reported their findings of mapping the Cook Strait Canyon - the most prominent underwater feature of the strait. They discovered that even the ripples of that year's Seddon earthquake, which struck at a magnitude of 6.5 near one of the least stable parts of canyon, were well below the level of ground shaking needed to activate a submarine landslide. But the scarred canyon bore evidence of large landslides in the past, and about once in every hundred years, a landslide in the Cook Strait region would displace 50 million cubic metres of seabed.

January 2014: A recent voyage mapping part of the Colville Ridge, northeast of Auckland, redefined the sprawling structure in stunning detail, with 3D imaging showing a mountainous ridge covered with jagged cones and valleys that lie about 2km below the top of its peaks.

The new data also revealed the ridge was far from entirely volcanic in origin, which had surprised some scientists.

April 2015: Scientists onboard the NIWA vessel Tangaroa find around 766 individual methane gas flares within an area of seabed off the coast of Gisborne, in a discovery described as a "major advance" for science and a first for New Zealand.

This meant the scientific understanding of the life that inhabited the area of these gas seeps needed to be re-evaluated, and a new model formulated.

Today: Scientists return from another mapping voyage around the Colville Ridge.
The data they have collected suggests areas of the ridge my be prospective for metallic minerals such as copper and gold.
The survey may also prove to show the huge ridge was once joined with nearby Kermadec Ridge.

Three kilometres wide and with a highest peak 1.2km below sea level, Brothers is the most hydrothermally active of all the volcanoes along the Kermadec Arc - itself arguably the most active chain of submarine volcanoes in the world.

By drilling into the volcano, scientists hope to unlock the secrets of its magma chamber, test computer models of its sea floor hydro-thermal plumbing, find out about the transport of precious metals inside the volcano, and assess diversity of microbial life within the volcano.