This first film in a series of three (see at the end of this article), introduces the Board of Longitude and the 18th century search for an accurate way of finding longitude at sea.
The papers in the Board's archive record scientific endeavour, fateful voyages, bitter feuds and lifetimes of commitment to a common cause.

Last Thursday the complete archive of the Board of Longitude was being launched online, with stories of innovation, exploration and endeavour - and much more than just John Harrison 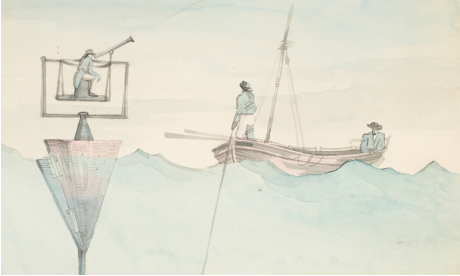 Design for a marine chair submitted to the Board of Longitude
Source: Cambridge University Library

Today Lord Rees will be launching the digitised archive of the Board of Longitude at Cambridge University Library.
Stuffed full of the correspondence and work of those who preceded him as Astronomer Royal, it also contains letters and papers of artisans, inventors, expeditionary astronomers and maritime explorers.

For those not familiar with the story of the 18th-century search for a means to determine longitude at sea, this video, gives an introduction to the project and the story.

The digitisation project is a collaboration between CUL and the National Maritime Museum, funded by JISC, and is closely allied to an AHRC-funded project on the history of the Board of Longitude that brings together researchers from the NMM and History and Philosophy of Science department in Cambridge.

This association has meant that as well as digitising 48,596 pages from the archives and libraries at Cambridge and NMM, the content is supported by links to relevant object records at the Museum, summaries of all and transcriptions of some of the files and essays on key figures, places, institutions, objects and events.

Written by the project researchers, there is enough text there for a couple of PhDs (at least) and a really useful resource for users of the site.
I was the laggard who has only contributed one essay so far, on Astronomer Royal Nevil Maskelyne.
He was, though, an extremely significant figure both for the longitude story and in this project, which also includes selections from Maskelyne's archive from the Royal Observatory and his personal papers held now at the NMM.

While historical researchers will undoubtedly find many ways to start digging into the archive, for those newer to the game there are, on top of the summaries and essays, resources for schools and some selected stories lifted from the archive.
The content can take the reader to the observatory at Greenwich, meetings at the Admiralty, artisan workshops of London and the South Seas. 
Key Stage 2 pupils will, we hope, learn about Captain Cook's voyages and Key Stage 3 will be able to think about inventors and enterprise.

For those who feel they are familiar with the story of longitude, having read about John Harrison and his sea clocks in Dava Sobel's Longitude, they will find there is much more to explore.
As my NMM colleague, Richard Dunn says,

The archive places the familiar story of Harrison in its richer context.
He was a crucial figure but the story is much broader.
It takes in the development of astronomy, exploration and technological innovation and creativity during the period of the Industrial Revolution, the work of the first government body devoted to scientific matters, and public reactions to a challenge many considered hopeless.

Simon Schaffer, who leads the research project, adds that

The longitude story is a spectacular example of expert disagreement and public participation.
As well as attracting the greatest scientific minds of the day, the board enticed people who belong to one of the most important traditions in British society; the extreme eccentric.
Thus while there may be interest in reading the full story of the Board's dealings with Harrison, eyes are likely to be caught by what were damned by the archive's 19th-century compilers as "Impractical schemes".
Some of these are real green ink stuff, with perpetual motion and squaring the circle bound into the seemingly intractable problem of finding longitude. However, there are many other schemes that, while they did not come to fruition, were based on sound ideas.
These included improvements to dead reckoning - the educated estimate of position that was not displaced by chronometers until the 20th century - or ways to steady an observer sufficiently to allow them to use Jupiter's satellites as a celestial timekeeper (the standard means of determining longitude on land).

In its later life, the Board supported the two successful methods of finding longitude at sea - chronometer and lunar distance - and broadened its remit into other fields.
Thus those who explore the digital archive will also land on geomagnetic research, pendulum experiments measuring gravity, the search for the North-West Passage and a young Michael Faraday pulled in to investigate ways to improve optical glass.

And much more besides - go on, dive in!


The Board of Longitude sent astronomers on voyages of exploration to test methods of navigation and help make better maps.
This is the second film of the series and looks at some of the techniques they used to make maps and introduces the story of William Gooch, a young astronomer who met an untimely end.

Making Greenwich the centre of the world
This is the final film in the series and tells the story of how the Nautical Almanac was produced thanks to work of a band of human computers.
This publication helped sailors find their position at sea.