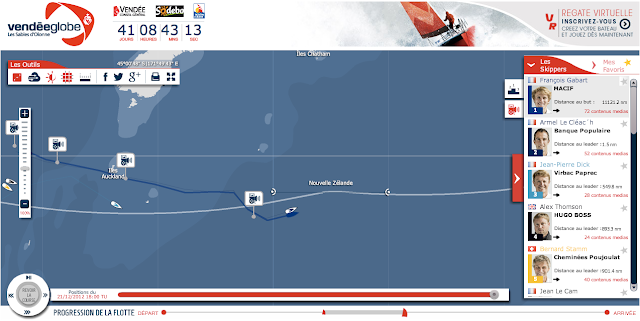 With info from V&V & wikipedia

Points with the same longitude lie in lines running from the North Pole to the South Pole.

The United Kingdom and its former colonies established the Royal Observatory at Greenwich just outside of downtown London in 1675.
This national observatory was established as the starting location for longitude or the y-axis for the British coordinate system.

Since the United Kingdom was a major colonial power and a major navigational power of the eighteenth and nineteenth centuries, their maps and navigational charts with the prime meridian passing through Greenwich were promulgated and many other countries adopted Greenwich as their prime meridians.
Britain had more shipping and ships using the Greenwich Meridian than the rest of the world put together (at the time) : the British Nautical Almanac started these charts in 1767.

By 1884, international travel was commonplace and the need for a standardized prime meridian became readily apparent.
Forty-one delegates from twenty-five "nations" met in Washington D.C. for a conference to establish zero degrees longitude and the prime meridian.

Greenwich was selected as the prime meridian by a vote of twenty-two in favor, one against (Haiti), and two abstentions (France and Brazil).
By the time of the conference, the United Kingdom and its colonies as well as the United States of America had already begun using Greenwich as the prime meridian; this weighed heavily on the selection process. 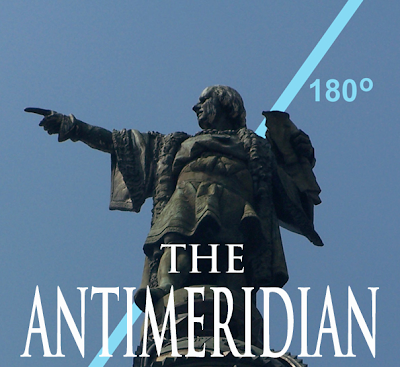 Vendée Globe : how to navigate to East to hit the West

Longitude is given as an angular measurement ranging from 0° at the Prime Meridian to +180° eastward and −180° westward.
The Greek letter λ (lambda), is used to denote the location of a place on Earth east or west of the Prime Meridian.

With the establishment of the prime meridian and zero degrees longitude at Greenwich, the 1884 Washington International meridian conference also established time zones, following the concepts of Canadian railroad engineer Sir Sanford Fleming (report).
By establishing the prime meridian and zero degrees longitude in Greenwich, the world was then divided into 24 time zones (since the earth takes 24 hours to revolve on its axis) and thus each time zone was established every fifteen degrees of longitude, for a total of 360 degrees in a circle.
So, it is used as the basis for the International Date Line because it for the most part passes through the open waters of the Pacific Ocean.
However, the meridian passes through Russia and Fiji as well as Antarctica.

The International Date Line can cause confusion among especially airline travelers.
The most troublesome and odd situations usually occurs with short journeys from west to east.
To travel from Tonga to (American) Samoa by air, for example, takes approximately two hours but involves crossing the International Date Line, causing passengers to arrive the day before they left. This often causes confusion in travel schedules, like hotel bookings unless those schedules quote times in UTC, but they typically do not since they must match domestic travel times, local transport, or meeting times.
Because the agreed IDL do not follow the 180° longitude in the middle of the Pacific Ocean a kind of odd daily date situation occurs.
For 2 hours every day, between 10:00 and 11:59 UTC, there exist 3 different weekdays concurrently.
For example at UTC time Tuesday 10:15, it is Monday 23:15 in American Samoa, which is 11 hours behind UTC, and it is Wednesday 00:15 in Kiritimati, which is 14 hours ahead of UTC.
For the first hour (UTC 10:00–10:59), this is true for inhabited territories, whereas during the second hour (UTC 11:00–11:59) it is only true if you count the uninhabited maritime time zone 12 hours behind UTC.

Longitude at a point may be determined by calculating the time difference between that at its location and Coordinated Universal Time (UTC).
Since there are 24 hours in a day and 360 degrees in a circle, the sun moves across the sky at a rate of 15 degrees per hour (360°/24 hours = 15° per hour).
So if the time zone a person is in is three hours ahead of UTC then that person is near 45° longitude (3 hours × 15° per hour = 45°).
The word near was used because the point might not be at the center of the time zone; also the time zones are defined politically, so their centers and boundaries often do not lie on meridians at multiples of 15°.
In order to perform this calculation, however, a person needs to have a chronometer (watch) set to UTC and needs to determine local time by solar or astronomical observation.
The details are more complex than described here: see the articles on Universal Time and on the equation of time for more details.

The International Date Line (IDL) is linked to the antimeridian.
The advantage of having the Prime meridian in Europe is to get an Antimeridian crossing on a North/South axis the largest liquid desert in the world, the Pacific Ocean so avoiding certain habitable land.
In crossing this line there is a date change of one day : the calendar day to the east of the line is one day earlier than it is to the west of the line.
Crossing the IDL traveling east results in a day or approximately 24 hours being subtracted, and crossing towards west results in a day being added.
So if one crosses the date line at precisely midnight, going westward, one skips an entire day; while going eastward, one repeats the entire day. 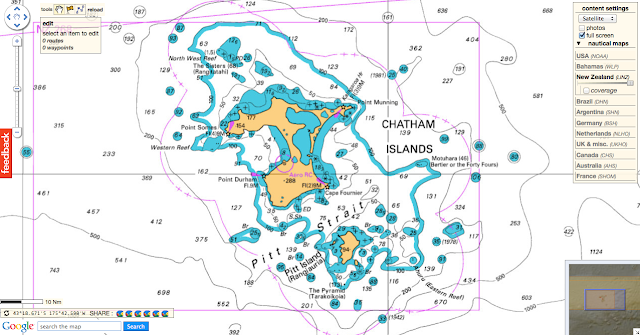 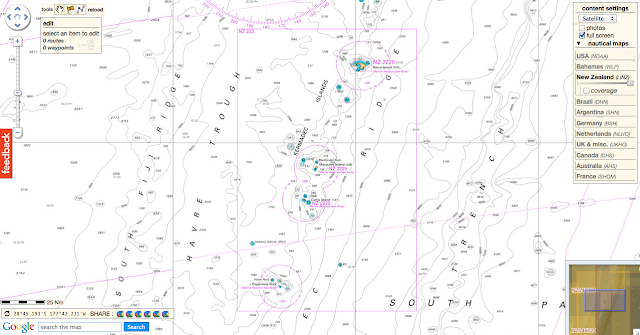 Line date change diverges from the antimeridian being shifted eastward between 5° S and 51°20 'S to leave in the same time zone New Zealand's Chatham Islands in the east and far north-east, the Kermadec Islands (whose name is issued from Jean-Michel Huon de Kermadec who commanded the Espérance on the Bruni d'Entrecasteaux expedition to find the lost expedition of Jean-François de La Pérouse).

This difference does not affect the Vendée Globe racers who have both sailed south of the latitude 51° 20'S when they reach the Antimeridian (around 53° S).

The establishment of the prime meridian in Greenwich in 1884 permanently established the system of latitude and longitude and time zones that we use to this day.
Latitude and longitude is used in GPS and is the primary coordinate system for navigation on the planet.
Right now, Armel and François the two VG leaders have seen the longitude stop increasing to 180° (E) to decrease from 180° (W) : they really are into the second part of the race right now and on the road back – theoretically. The reality is they will sail to home 12,000 miles more...

The map of the world showing Magellan's Route
(view in high resolution with the BNF )
The first date line problem occurred in association with the circumnavigation of the globe by Magellan's expedition (1519-1522).
The surviving crew returned to a Spanish stopover sure of the day of the week, as attested by various carefully maintained sailing logs.
Nevertheless, those on land insisted the day was different.
This phenomenon, now readily understandable, caused great excitement and confusion at the time, to the extent that a special delegation was sent to the Pope to explain this temporal oddity to him.
The effect of ignoring the date line is also seen in Jules Verne's book "Around the World in Eighty Days", in which the travelers, led by Phileas Fogg, return to London after a trip around the world, thinking that they have lost the bet that is the central premise of the story.
Having traveled the direction opposite to the one taken by Magellan, they believe the date there to be one day later than it truly is. 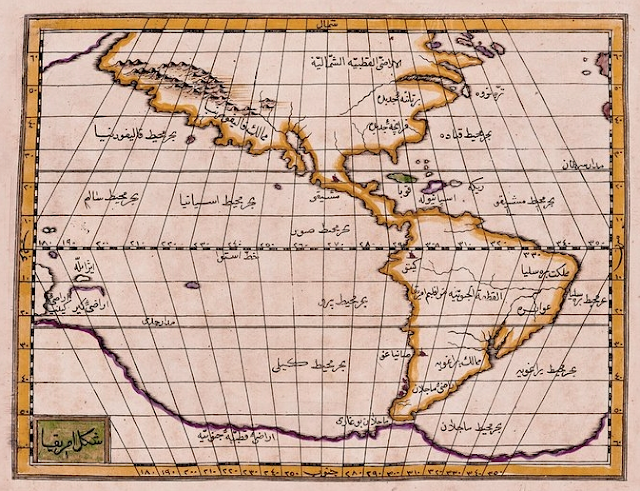 Şekl-i Amerika (America), Ottaman Empire
The map of America, also called The New World, covers the region between the 60 degree parallels in the north and south.
The lines of latitude and longitude are drawn intersecting at right angles in the manner of Mercator.