The New Zealand Sub-Antarctic Islands has five island groups (the Snares, Bounty Islands, Antipodes Islands, Auckland Islands and Campbell Island) in the Southern Ocean south-east of New Zealand, occupying the stormy latitudes of the Roaring Forties and the Furious Fifties, known also as the Albatross Latitudes.
The islands situated between the Antarctic and Subtropical Convergences and the seas, have a high level of productivity, biodiversity, wildlife population densities and endemism among birds, plants and invertebrates.
They are particularly important resident for the large number of pelagic seabirds and penguins that nest there.
There are 126 bird species in total, including 40 seabirds of which five breed nowhere else in the world.

The New Zealand Sub-Antarctic Islands shows a pattern of immigration of species, diversification and emergent endemism, provides particularly good opportunities for research into the dynamics of island ecology.
The New Zealand Sub-Antarctic Islands are remarkable for their high level of biodiversity, population densities, and for endemism in birds, plants and invertebrates.
The bird and plant life, especially the endemic albatrosses, cormorants, petrels, shearwaters, fulmars, prions -and “megaherbs” are unique to the islands.

Penguins too, are special in the Sub Antarctic region.
Of seven penguin species breeding here, three (Snares crested, Erect crested and Royal) are endemic to the region.
The land birds indicate, through their diversity, just how long these islands have been isolated.

North East Island, NZ
>>> geolocalization with the Marine GeoGarage <<<
The North East Island is the main island of the Snares Island group, approximately 200 kilometres (120 mi) south of New Zealand's South Island.
The island forms a central triangle with peninsulas to the north, south and to the west and is some 3 by 2.5 km (1.9 by 1.6 mi) long by wide. Off the South Promontory lies Broughton Island, the second largest island in the group. South off the western peninsula coast lies the islet Alert Stack and off the North Promontory lies the North and South Daption Rocks.
The highest elevation of 130 m (427 ft) is at the western peninsula. 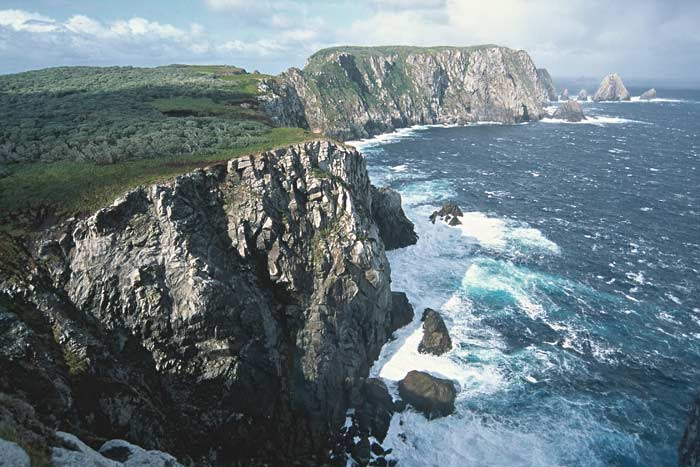 The southwest part of North East Island, Snares Islands, where the coastline is oriented to the northwest, showing the rocky cliffs that are typical of much of the south, west and north coasts exposed to prevailing westerly storms.
Photo Copyright © 2004 Tui De Roy, Roving Tortoise Worldwide Nature Photos

Bounty islands
>>> geolocalization with the Marine GeoGarage <<<
The Bounty Islands are a small group of 13 uninhabited granite islets and numerous rocks in the south Pacific Ocean that are territorially part of New Zealand. It lies about 670 km (416 mi) east-south-east of the South Island of New Zealand, and 530 km south-west of the Chatham Islands.
The Bounty Islands were discovered by Captain William Bligh in 1788 and named after his ship, HMS Bounty, just months before the famous mutiny.
During the 19th century, they were a popular hunting ground for sealers. 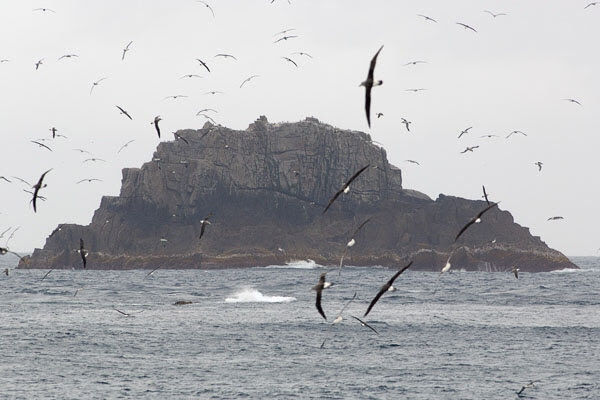 The Bounty Islands are literally rocks in the ocean.

Antipodes islands
>>> geolocalization with the Marine GeoGarage <<<
The Antipodes Islands are inhospitable volcanic islands to the south of—and territorially part of—New Zealand. They lie 860 kilometres (534 mi) to the southeast of Stewart Island/Rakiura. View from the Antipodes

Auckland islands
>>> geolocalization with the Marine GeoGarage <<<
The Auckland Islands are an archipelago of the New Zealand subantarctic islands and include Auckland Island, Adams Island, Enderby Island, Disappointment Island, Ewing Island, Rose Island, Dundas Island and Green Island.
They lie 465 kilometres (290 mi) from the South Island port of Bluff.
The islands have no permanent human inhabitants.

"During my second Vendée Globe, I thought of stopping on the Auckland Islands south of New Zealand, however, this is not easy to do in an Open 60. I said to myself that the JP 54 would have to be able to anchor in a bay or set off again in less than 10 minutes. The pleasure of sailing comes with the ease with which you can discover a place.” Jean-Pierre Dick (31/12/2008)

Campbell Island
>>> geolocalization with the Marine GeoGarage <<<
Campbell Island is a remote, uninhabited, subantarctic island of New Zealand and the main island of the Campbell Island group.
The island is surrounded by numerous stacks, rocks and islets like Dent Island, Folly Island, Isle de Jeanette Marie, and Jacquemart Island, the latter being the southernmost extremity of New Zealand.
The Island is mountainous, rising to over 500 metres (1,640 ft) in the south.
A long fjord, Perseverance Harbour, nearly bisects it, opening out to sea on the east coast. 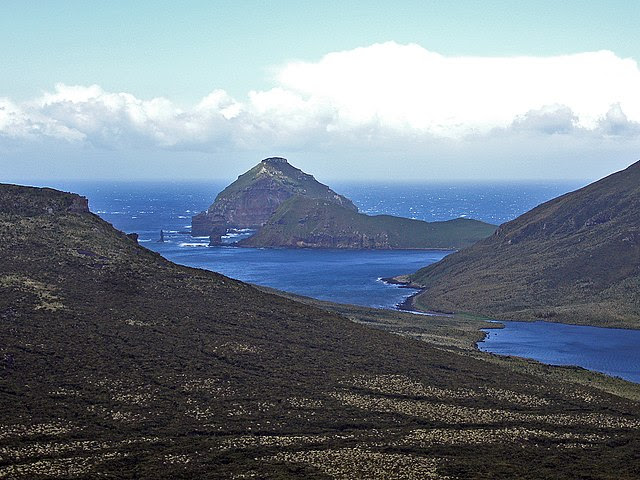 Landscape, Campbell Island with Jacquemart Island in the background.

Macquarie Island (or Macca) lies in the southwest corner of the Pacific Ocean, about half-way between New Zealand and Antarctica.

About 1500 km south east of Tasmania, Macquarie Island is a tiny fragment of land between Tasmania and Antarctica in the Southern Ocean. Politically, it is part of Tasmania, Australia since 1900 and became a Tasmanian State Reserve in 1978.
In 1997 it became a World Heritage Site. The island is home to the entire Royal Penguin population on earth during their annual nesting season.
Ecologically, it is part of the Antipodes Subantarctic Islands tundra ecoregion.