Why we need to transform the EU's Common Fisheries Policy (CFP)

Tuesday’s vote by the European Parliament’s Fisheries Committee to amend CFP reforms have been greeted with enthusiasm by a number of environmental NGOs including ClientEarth, Greenpeace, WWF, the Pew Foundation and OCEAN 2012.

Sandy Luk, of environmental law organisation ClientEarth, said: “This vote sends a strong signal to the Council that Europe is pressing ahead with the sustainable fisheries reform we so badly need.
“The Fisheries Committee MEPs have voted for fishing levels to be determined in future by science, not politics. They have voted to set sustainable fishing levels by 2015 in order to achieve healthy fish stocks at the latest by 2020. They have decided in favour of ending discards according to a pre-determined time table; and crucially recognised that fishing needs to respect and comply with EU environmental laws.”

David Nussbaum, Chief Executive of WWF-UK, said: ”This is true progress and a real victory for the hundreds of thousands of Europeans who petitioned, asked and pushed their MEPs to enshrine sustainability into the next decade of Common Fisheries Policy.
“The Fisheries Committee has shown through this milestone vote that the European Parliament is listening to scientific advice. MEPs on the Committee showed leadership by voting to allow fish stocks to recover above maximum sustainable yield (MSY) and for long term management plans which will guide this process. This proposal will now be laid before the European Parliament. It is now up to the rest of MEPs in the Parliament to champion this ambitious reform and vote next year for sustainable fish stocks.”

Roberto Ferrigno, of WWF’s European Policy Office, said: “WWF are incredibly happy that this key stage of the reform process to make the EU fisheries policy more sustainable has been won, despite relentless opposition from certain individuals within the European Parliament’s fisheries committee who wanted to keep a status quo. This is true progress and a complete victory for an amazing group of supportive MEPs - they know who they are - who worked around the clock to make this happen!”

Greenpeace EU fisheries policy director, Saskia Richartz, added: “The vote today marks a turning point after decades of complacency for over-fishing. The European Parliament has injected some much-needed ambition in the reform of EU fishing rules and challenged European governments to follow suit. At this stage, fisheries ministers are the main obstacle standing in the way of the recovery of our oceans and a sustainable future for fishing. Greenpeace and small-scale fishermen from across Europe call on them to back strong measures to scrap over-fishing, promote low-impact fishing and preserve our oceans for generations to come.”

German MEP, Ulrike Rodust, has drawn on the growing public support to end over-fishing by leading the Committee to this result.
We now look to the plenary of the European Parliament and to EU fisheries ministers to ensure today’s result is transformed into law.

The draft resolution on the Common Fisheries Policy was approved with 13 votes in favor, 10 against and 2 abstentions, and should be put to a plenary vote in February. 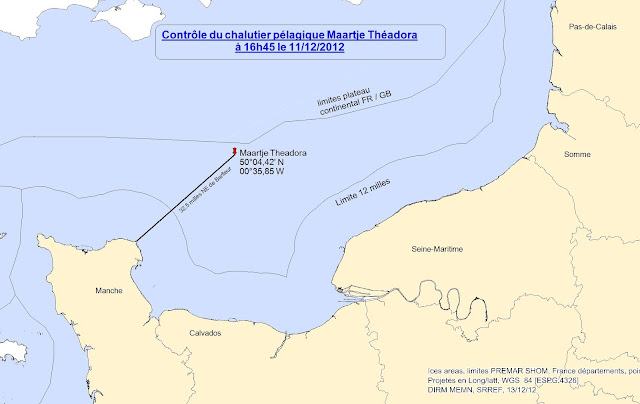 Pelagic German trawler 'Maartje Theadora' fined in the French waters
Posted by Peio at 1:45 AM