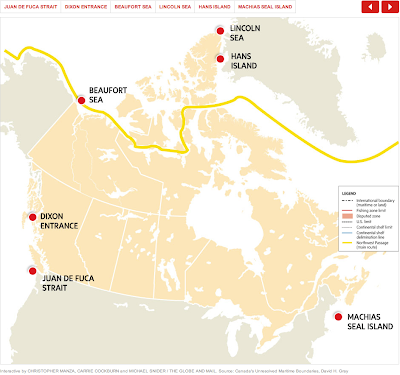 Above, an interactive map takes you through six of Ottawa’s remaining boundary disagreements.

The Canadian government still has several outstanding territorial disputes with foreign governments that may take several decades of delicate diplomacy to resolve.

An agreement on a decades-old maritime boundary dispute with Denmark could be a sign that Canada is serious about its plan to resolve competing claims in the north, researchers suggest.

Negotiators have a tentative plan to address ownership of two small patches of water totalling less than 225 square kilometres in the Lincoln Sea, an area of the Arctic Ocean north of Ellesmere Island and Greenland.
There is still, however, no resolution over Hans Island, as well as several boundary disputes with the United States in the Arctic and further south.

“What we’re seeing here is the Harper government signalling a willingness to resolve disputes with other Arctic countries, and that is very significant,” said Michael Byers, a professor at the University of British Columbia who holds a Canada Research Chair in global politics and international law.
As a shrinking polar ice cap opens up a wealth of economic opportunities in the Arctic, Dr. Byers and other researchers say there is new urgency for the federal government to firmly draw Canada’s boundaries.

The Arctic contains more than one-fifth of the world’s undiscovered energy resources, according to the U.S. Geological Survey.
While no one owns the area surrounding the North Pole, Canada is among several countries that have been working to map the floor of the Arctic Ocean to determine how much of the seabed they can lay claim to in the near future.

“We know that the north is going to become much, much busier, and with that increased activity we know that foreign interests are already showing a greater appreciation,” said Rob Huebert, associate director of the Centre for Military and Strategic Studies at the University of Calgary.

Under the United Nations Convention on the Law of the Sea, coastal countries are entitled to economic control over the waters that stretch as far as 200 nautical miles from their shores.
If a country can prove its continental shelf extends even further, it may be granted control of a greater expanse.

Canada’s claim is due by the end of next year and, depending on how far it stretches, could spark feuds with other northern countries.
Both Canada and Russia have said they believe the mineral and oil-rich Lomonosov Ridge, which runs beneath the ocean and close to the geographic North Pole, is a natural extension of their continental shelves.

“There’s a real possibility that we will have a 200-nautical-mile overlap with the Russians,” Dr. Huebert said. Canada has said it would deal with any overlap through international dispute regulation mechanisms, he said, “But we’ve never had a boundary dispute with the Russians, so that would be a new sort of foreign policy issue that we’re facing.” 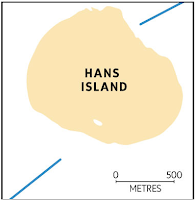 Who: Canada vs. Denmark.
What: A small, uninhabited island in the Kennedy Channel, which runs between Ellesmere Island and Greenland.
How big: The island is 1.3 square kilometres.

Why: In 1973, Canada and Denmark negotiated a treaty that divided the maritime boundary between the two countries using the principle of equidistance.
But negotiators could not agree on what to do with Hans Island, which lay directly in the path of the boundary line they were drawing.
To avoid slowing the process down, they drew the line up to either side of the island’s shores, putting the land mass itself aside for future negotiations.
After several years of tensions that saw competing flag-planting expeditions and heightened rhetoric, the two countries signed a joint statement in 2005 committing to continued negotiations and promising to inform one another in advance of any planned activities related to the island.
The island has no direct economic value, but neither country wants to give up its claim, largely out of fear that doing so could jeopardize other Arctic claims, Dr. Huebert said.
“Everyone says how insignificant it is,” he said. “But I always come back to the point: if it was so simple, and so easy, why haven’t we settled it?”
Canada calls this dispute “well-managed,” and meets regularly with Denmark to discuss ways forward. “We are talking very constructively to each other,” Danish ambassador Erik Vilstrup Lorenzen said in a recent interview.
He said there are several possibilities for a “mutually agreeable” solution, but declined to describe the options the two countries are considering.
Reports earlier this year that Canada and Denmark would split the island down the middle were tempered by the ambassador, who said that was one of a number of options under consideration.

List of areas disputed by Canada and the United States 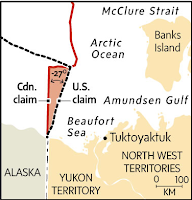 Who: Canada vs. U.S.
What: A triangle-shaped section of the Arctic Ocean north of the Alaska/Yukon border.
How big: The area in question is roughly 21,000 square kilometres shaped in a triangle that extends from the Alaska-Yukon border to the edge of the U.S. and Canada’s exclusive economic zones.

Why: Canada claims the 1825 Treaty of St. Petersburg – signed by Russia and the U.K. – puts the maritime boundary along the 141st meridian.
That treaty indicates that the meridian line should serve as the border between Alaska and the Yukon “as far as the frozen ocean.” Canada claims it should apply to the sea as well.
The U.S. says the boundary should be guided by the principle of equidistance, which would create a line that is perpendicular from the coast, and one that slants east of the line claimed by Canada. Oil-and-gas deposits in the Beaufort Sea mean the disputed territory is highly valuable to both countries – and could make this dispute the most difficult to resolve.
But if the continental shelf extends significantly beyond 200 nautical miles, resolving the dispute could become much easier, Dr. Byers said.
Using the U.S. equidistance principle, the maritime boundary slants to the east until it reaches the edge of the exclusive economic zone.
But if it were extended further, the presence of Banks Island in the Northwest Territories would push the U.S. boundary back towards the west and onto the other side of Canada’s preferred meridian boundary.
Dr. Byers, who co-authored a recent paper on the dispute with James Baker, said he believes the only reason the dispute hasn’t yet been resolved is that both governments are still collecting data about the outer limit of their extended continental shelves.
(The U.S. has not signed on to the International Convention on the Law of the Sea, but supports the treaty in principle.)
“I showed the map two years ago to [then foreign affairs minister] Lawrence Cannon, and a big smile went across his face,” Dr. Byers said. “He recognized it was a win-win.” 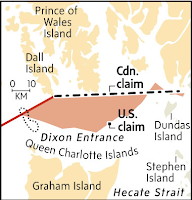 Inside Passage (Near Dixon Entrance)
photo : NicholasRalph
Who: Canada vs. U.S.
What: The section of water between the Alaska panhandle and Haida Gwaii, formerly the Queen Charlotte Islands
How big: The disputed waters cover roughly 2,750 square kilometres.

Why: In 1903, an international tribunal set the southernmost land boundary for the Alaska panhandle. Canada argues the line the judges used to determine which land masses belonged to each country should also be used as the maritime boundary – leaving Canada with the entire Dixon Entrance.
The U.S. wants the waters to be divided equally between the two countries.
Donald McRae, a law professor at the University of Ottawa who worked on boundary water disputes for British Columbia in the 1970s, said it’s possible to find arguments that support both countries’ claims.
“The arguments are sort of evenly balanced,” he said. “There’s support on both sides rather than one being absolutely right and one being absolutely wrong.” 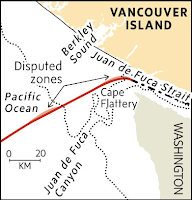 Who: Canada vs. U.S.
What: The dispute is over a section of the Pacific Ocean to the west of the Juan de Fuca Strait, the body of water that runs between Vancouver Island and Washington State.
How big: Combined, the two sections of water total an area of about 50 square kilometres.

Why: Both countries have agreed on their shared maritime boundary inside the strait.
To the west of the strait, they each use the principle of equidistance to claim exclusive fishery zones, but calculate the line using different baselines.
The result is two main pockets of disputed water, one of which is in the area of the salmon- and halibut-rich Swiftsure Bank fishery. 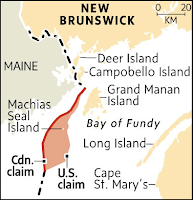 Who: Canada vs. U.S.
What: Machias Seal Island, a small, mainly uninhabited island in the Bay of Fundy and the Gulf of Maine, and some of the surrounding water.
How big: The island is six hectares and the maritime area in dispute is about 720 square kilometres.

Why: In the 1980s, Canada and the U.S. asked the International Court of Justice to resolve the maritime boundary that would separate Maine from New Brunswick and Nova Scotia.
But they deliberately excluded the area around Machias Seal Island and Gull Rock and North Rock, two islets nearby, which both countries say should be theirs.
The U.S. argument is bolstered by the proximity of the island to Maine.
New Brunswick has kept an active lighthouse on the island since 1832, and the Coast Guard has a navigational aid at North Rock.
The economic value of this island is minimal. It is mainly used by birdwatchers and researchers.
“Every now and then it crops up as an issue between the two parties, and then they just simply try to put aside because I don’t think either side is interested in dealing with it,” Prof. McRae said.
Posted by Peio at 1:50 AM