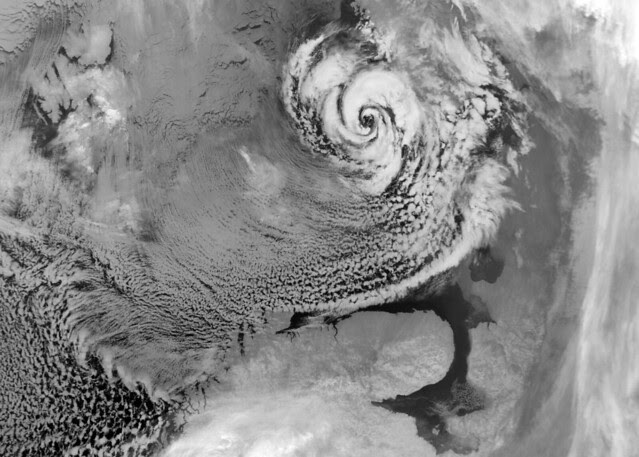 This is a beautiful polar low in the Barents Sea on the 20th of December 2002, with a characteristic eye and counter-clockwise swirl of clouds.
The grey area in the upper left-hand corner is sea ice.
’Polar low’ is the denomination of a wide range of weather phenomena at high latitudes.
Although many definitions have been proposed, the following one was given by Rasmussen and Turner in the book "Polar lows" from 2003:
A polar low is a small, but fairly intense maritime cyclone that forms poleward of the main baroclinic zone (the polar front or other major baroclinic zone).
The horizontal scale of the polar low is approximately between 200 and 1000 kilometres and surface winds near or above gale force.
A 'baroclinic zone' is a region with large local temperature differences, which are the primary source of 'fuel' for most cyclones outside the tropics ('extratropical cyclones').
Although we now know that polar lows can occur in both hemispheres (a polar low-like feature has even been observed over the Mediterranean), they were first noticed in the Nordic Seas, or more specifically along the coast of Norway.
Photo credit Erik Kolstad

Santa better have hurricane insurance.
Every year, there are thousands of cyclones in the Arctic, some with hurricane-force winds.
Before satellites spotted these storms, sailors would return from the North with tales of massive squalls appearing out of nowhere, creating waves up to 36 feet (11 meters) high.

A new study published online this week in the journal Nature Geoscience has found that these storms transport a significant amount of heat from the tropics to the Arctic and help power the Gulf Stream, the ocean current that shuttles warm water northeast from the Caribbean toward Europe.
The Gulf Stream keeps the continent warmer than it would otherwise be, said Alan Condron, study co-author and oceanographer at the University of Massachusetts at Amherst.
These storms are technically known as polar lows but can be referred to as Arctic hurricanes, although that term usually refers to cyclones that form in the tropics.
Like hurricanes, though, polar lows can be incredibly intense, with winds above 74 mph (118 kph), and have a central "eye" with swirling bands of clouds, Condron told OurAmazingPlanet.
Unlike typical hurricanes, however, polar lows tend to be on average about 25 percent smaller in area and are shorter-lived, he said.

Polar lows are created when masses of frigid air move over warmer water, which creates instability in the atmosphere.
That can lead to the development of small, strong storms powered by the transfer of heat from the ocean to the atmosphere, as well as by the interaction of warmer air to the north with cooler air to the south, said Kent Moore, an atmospheric physicist at the University of Toronto who wasn't involved in the research.
As the frigid air from one of these storms moves over the comparatively warmer water, the water cools and sinks. This sinking helps power the Gulf Stream, and more broadly, the global ocean conveyor belt, Condron said.
The storms "intensify the circulation of the ocean and are partly responsible for keeping Europe warm," he said.
Prior to this study, nobody had looked to see whether or not these brief cyclones — which usually last about 24 hours — might have a significant impact on the world's oceans and climate, Moore said.
"The authors were able to show these storms have a strong impact on ocean circulation," he said. "That's quite a surprising result since [the cyclones] are so short-lived." But thousands of short-lived storms add up, he added.

A polar low over the Norwegian Sea: these polar storms can have hurricane-strength winds and are common over the polar North Atlantic, but are missing from climate prediction models due to their small size.
Credit : NEODAAS Dundee Satellite Receiving Station

The air within polar lows can often be as cold as minus 4 degrees Fahrenheit (minus 20 degrees Celsius).
They are capable of extracting 93 watts of heat per square foot (1,000 watts per square meter), enough to power two 45-watt light bulbs for every square foot of ocean surface, Moore said.
Condron estimates these Arctic hurricanes are responsible for about 5 percent of the heat transferred from the equator to the poles, he said.
He and his co-author Ian Renfrew, from the University of East Anglia in England, were able to create a computer model that accurately recreated these powerful storms.
Current climate models do not take the storm into account, which could lead to incomplete predictions, Condron said.
"These models may predict it will be too warm [to the south]," he said.
"If we can run models that include these polar lows, it will improve our future forecast."