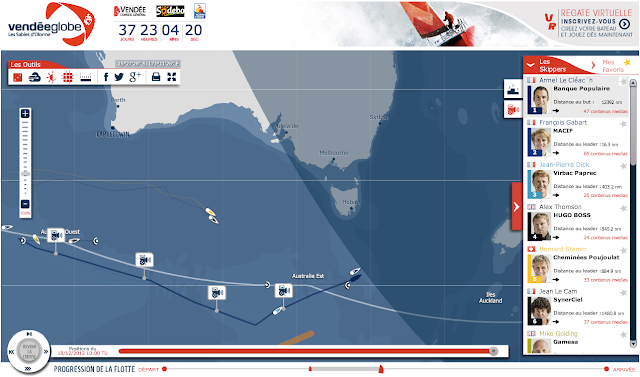 South of Tasmania
>>> geolocalization with the Marine GeoGarage <<<

The surface of the planet is approximately 71% water and contains (5) five oceans, including the Arctic, Atlantic, Indian, Pacific and Southern.
For many years only (4) four oceans were officially recognized, and then in the spring of 2000, the International Hydrographic Organization established the Southern Ocean, and determined its limits.
(see About.com)
Those limits include all water below 60 degrees south, and some of it, like the Arctic Ocean, is frozen.

The question of defining the oceanic limits of the Indian Ocean is complicated and remains unsettled.
The clearest border and the one most generally agreed upon is that with the Atlantic Ocean, which runs from Cape Agulhas, at the southern tip of Africa, due south along the 20° E meridian to the shores of Antarctica.

The border with the Pacific Ocean to the southeast is usually drawn from South East Cape the southernmost point of the main island of Tasmania (the southernmost state of Australia) down the 147° E meridian to Antarctica.

There is no universal agreement on the southern limit of the Indian Ocean.
In general (and for the purposes of this article), it is defined as extending southward to the coast of Antarctica.
However, many—notably in Australia—consider the portion closest to Antarctica (along with the corresponding southern extensions of the Atlantic and Pacific) to be part of the Southern (or Antarctic) Ocean.
Australians often call the entire expanse south of that continent’s south coast the Southern Ocean.

The Indian Ocean, according to the CIA The World Factbook (blue area),
and as defined by the IHO (black outline - excluding marginal waterbodies)

Bounded by five continents, the Pacific Ocean is Earth’s largest feature—but it was generally unknown to Europeans until Spanish explorer Vasco Nuñez de Balboa sighted it in 1513 from a peak in Darién, Panama.
Later, Portuguese explorer Ferdinand Magellan sailed the Pacific on a Spanish expedition of world circumnavigation from 1519 to 1522.
Magellan called the ocean Pacífico or "Pacific" because he encountered calm seas throughout his journey.

Maris Pacifici by Ortelius (1589).
One of the first printed maps to show the Pacific Ocean