The world as they knew it: New Beinecke exhibition charts rise of maps 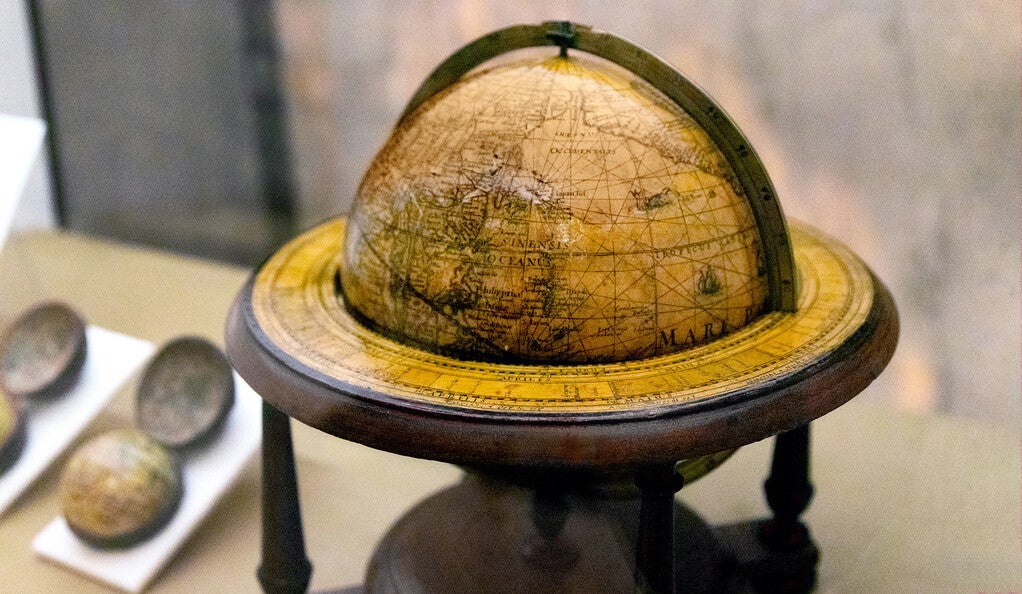 A globe like this one, which dates from around 1621, would have provided a handsome decoration in a wealthy household.
It was donated to Yale by Stephen F. Gates ’68.
Globes were unknown to Europe until the 15th century when they were imported from the Arab world.
(Photo by Allie Barton)
From Yale by Mike Cummings
After mapmaker Judah Ben Zara was banished from Spain in 1492, when Ferdinand and Isabella expelled their kingdom’s Jewish population, the exiled cartographer continued plying his craft in the Middle East.
His only surviving maps — two made in Egypt and one in Galilee — are among the few existing examples created outside of Europe during this period.

One of those maps, a portolan chart of the Mediterranean Sea he produced more than a decade later in Tsefat — a city located in present day northern Israel — is on view as part of “The World in Maps 1400–1600,” a new exhibition at Yale’s Beinecke Rare Book & Manuscript Library that presents a selection of the most impressive and historically important maps in the library’s collection from the late Medieval and Early Modern periods.

“What’s fascinating is that Ben Zara’s maps look just like those being produced in Spain and Italy at the time,” said Ray Clemens, curator of early books and manuscripts, who organized the exhibit with Kristen Herdman, a Ph.D.
candidate in the medieval studies program.
“He took his mapmaking knowledge with him from Spain, but he used different materials than European-based mapmakers.” 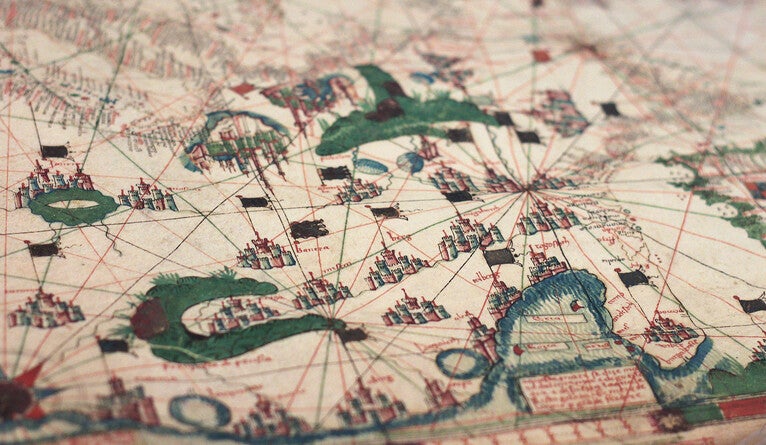 A detail from a portolan chart of the Mediterranean Sea drawn in 1505 by mapmaker Judah Ben Zara.
Sailors used portolans to locate ports.
The charts often featured artistic flourishes, such as the pennants and castles pictured here.
(Photo by Stephen Gamboa-Diaz)
Specifically, peptide mass fingerprinting, an analytical technique used to identify proteins, revealed that the 1505 map is made on goatskin, Clemens said, while contemporary European maps in the library’s collection were produced on either sheepskin or calfskin.

“He lived where there were no sheep or calves,” he said, “so he’s improvising.”

Yale boasts one of the most significant map collections in North America, including the continent’s largest single assemblage of portolans — navigation charts that seafarers used to find ports.
Ten of the Beinecke Library’s portolans, which comprise the exhibit’s centerpiece, are displayed in the two flat cases on either side of the building’s ground floor.
In addition, a selection of maps from Asia is displayed in a curved case on the library’s mezzanine.
On the mezzanine’s opposite side, a second curved case contains examples of forged maps, including the notorious Vinland Map, once considered the earliest depiction of the New World.
Eighteen smaller cases lining the east and west sides of the mezzanine display materials concerned with various historical, cultural, or technological aspects of mapmaking. 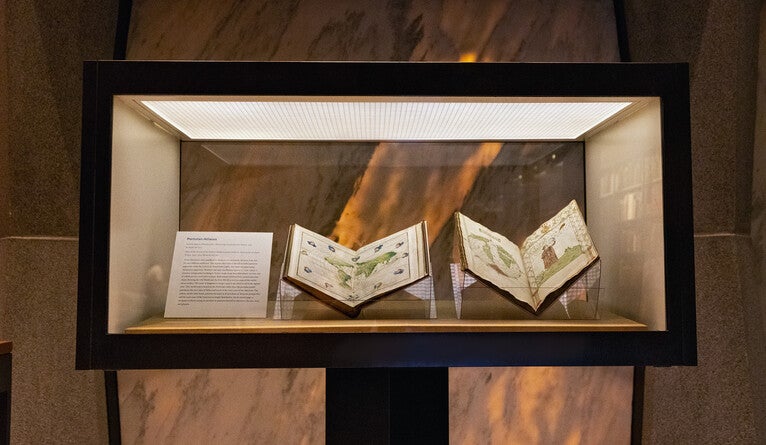 Not technically maps, portolans are nautical charts that offer few geographic details about the interiors of the land masses they depict.
Like other examples from the period on display, Ben Zara’s depicts the orbis terrarum — the circle of land surrounding the Mediterranean — identifying scores of major and minor ports from Spain to Greece to Egypt and present-day Morocco.
(Red identifies major ports, black denotes minor ones.)
Red and black lines, called rhumb lines, crisscross the chart and helped sailors to determine courses from one port to another.
The charts often vividly mark shoals and other treacherous features near the coastlines.

Even though Ben Zara and his contemporaries lacked the benefit of satellite imagery or even hot air balloons to get a bird’s eye view of the terrain, their renderings of the Mediterranean coastline are impressively accurate.
They often added whimsical, artistic flourishes.
For instance, palm trees, billowing tents, and an ostrich dot the North African coast on Ben Zara’s portolan.
He painted the Red Sea’s waters red — a visual cliché on portolan charts.
And like other portolans from the period, Ben Zara’s map shows a land bridge near the sea’s northern shores representing the location where the Israelites escaped Egypt in the biblical Exodus account.

“Of course, in the biblical story, the sea closes after the Israelites cross the parted waters, drowning the pharaoh’s troops,” Clemens said.
“It’s representation on this and portolan charts shows how they served historical as well as geographical documents.”

In the exhibition, Ben Zara’s Tsefat chart is paired with a facsimile of his first known map — presently housed at the Vatican Library — which he made in Cairo in 1497.
These maps share the flat case to the left of the library’s security desk with the oldest map in the library’s collection — a portolan chart made by Genoese mapmaker Franciscus Becharius in 1403.

The case also contains the oldest known portolan from Portugal, which was completed by mapmaker Jorge de Aguiar in 1492.
At that point in history, the Portuguese had successfully explored the west coast of Africa for European interests and Aguiar shared what they had learned of the African coastline in two insets on the chart.
Columbus brought a similar map on his first voyage to the Americas, according to the exhibit label.

The flat case to the right of the security desk features portolans made after European cartographers began contemplating the New World in their work.
A portolan of the Atlantic dated to after 1637 outlines the routes used in the slave trade between Africa and Brazil.
An illustration of Elmina Castle, an early European trade settlement in present-day Ghana that became a base for slave traders, features prominently on the Gold Coast of Africa. 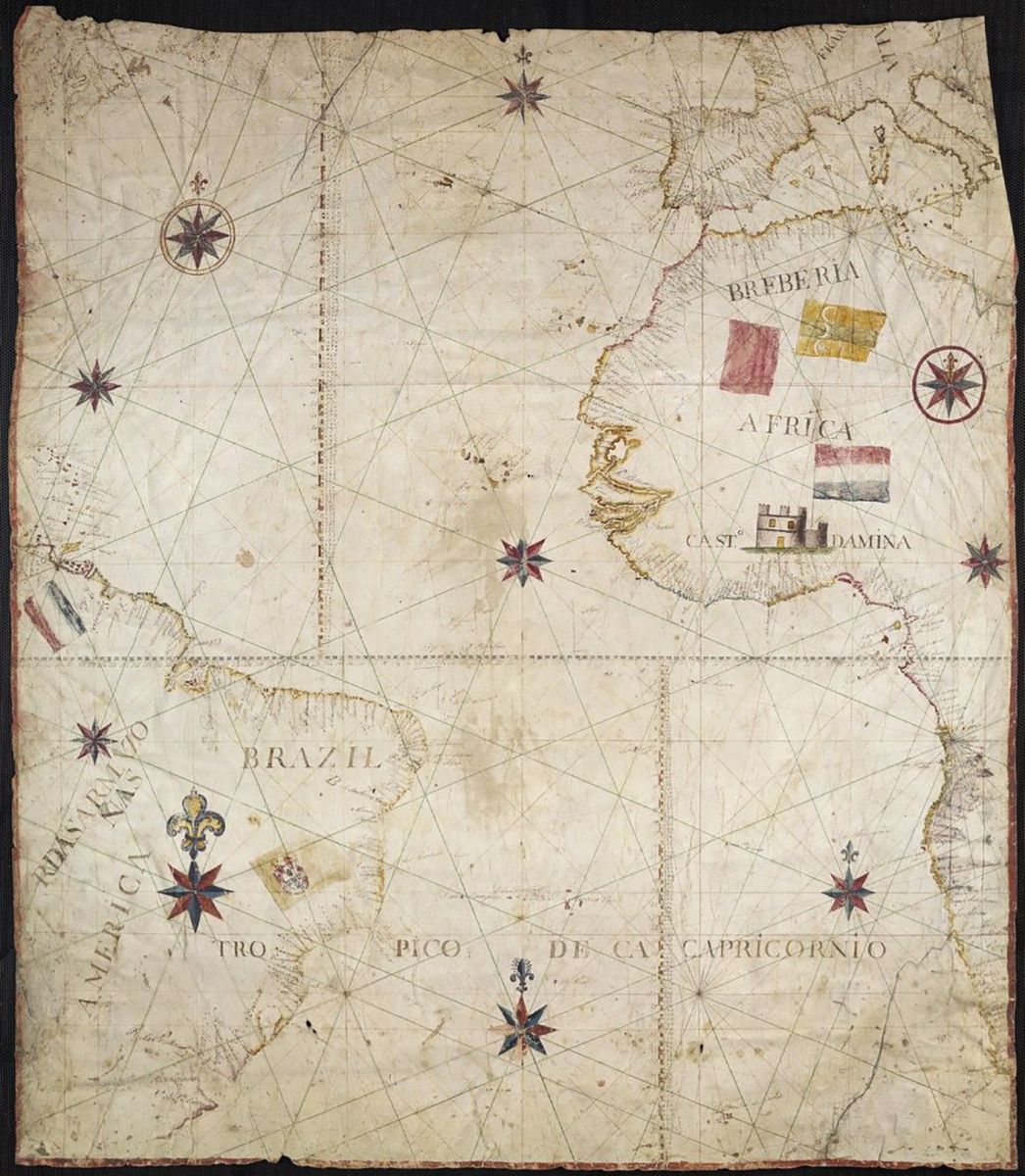 A portolan chart of the Atlantic that outlines the slave trade.
The Castle of Elmina, a major stop on the slave trade located in present-day Ghana, is featured prominently under a Dutch flag, which dates the map to after 1637 when the Dutch took control of the region.
A curved case on the north end of the mezzanine offers a sense of how Asian cultures viewed their place in the world.
Manuscripts maps of Asia are extremely difficult to find outside of China, Japan, and Korea, but the Beinecke Library has a small collection of printed maps made from earlier originals, Clemens said.
A large political map of Korea at the case’s center is an 18th-century reproduction of a map likely made during the Joseon Dynasty in the 16th-century.

A display case along the east wall contains two copies of Da sphaera (“On the sphere”), a 13th-century text by astronomer Johannes de Sacro Bosco that shows, contrary to contemporary myth, that medieval people conceived of the world as an orb.

One of the copies, produced in the 15th century, includes an illustration of an astronomical model with Earth at the center, the sun at the periphery, and depictions of the moon in its various phases at it circles the globe.
The second copy, created between 1526 and 1527, includes a foldout map of the world.
It is a version of a T-O map, which were common in medieval Europe.
These maps were simple diagrams consisting of a “T,” which typically divides the world into Asia, Europe and Africa, enclosed in an “O” that represents the waters surrounding land masses.
While used for instruction, T-O maps were not meant to reflect the shape of the world, Clemens explained. 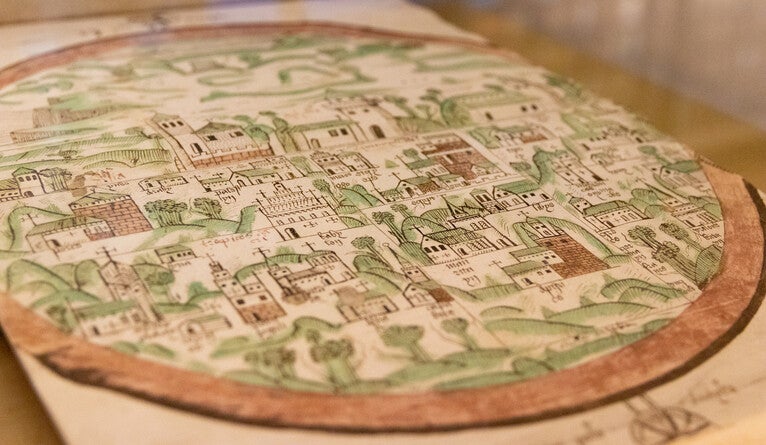 A foldout map of the world from a 16th-century copy of Da sphaera (“On the sphere”) by astronomer Johannes de Sacro Bosco.
(Photo by Allie Barton)
A case displaying Arabic world maps includes a copy of a 17th-century copy of map of the world from “A Book of Marvels and Things Created” by 13th-century cosmographer Zakariyya’ al-Qazwini.
Mecca sits at the map’s center, the rest of the world spreading out in a circle from it.
The Red Sea is a rectangular blue mass.
The Mediterranean is oblong shaped at the map’s top-left.

A treatise Geoffrey Chaucer penned circa 1450 on how to use an astrolabe is included in a case containing manuscripts about the astronomical instrument that sailors used to determine latitude.
He dedicated the work to his son.

At its conclusion, the exhibit turns its gaze to the heavens.
The final small case on the building’s west side holds several copies of Galileo’s first printed images of the moon.
The famed astronomer’s detailed sketches of the cratered lunar landscape — the first ever created with the benefit of a telescope — introduced many Europeans to the dark side of the moon.
Before Galileo’s discoveries, many people believed that the moon generated its own light, Clemens said.

A black and white image of the Earth taken in 1966 by Lunar Orbiter 1, the first U.S.
spacecraft to orbit the moon, provides a backdrop to the display of Galileo’s materials.

“When Galileo looked through his telescope, it gave him a new perspective of the moon,” Clemens said.
“I thought it was fitting to include the first Earthrise photo, as it offered all of us a unique perspective of the Earth from the moon.”
Posted by geogarage at 1:44 AM