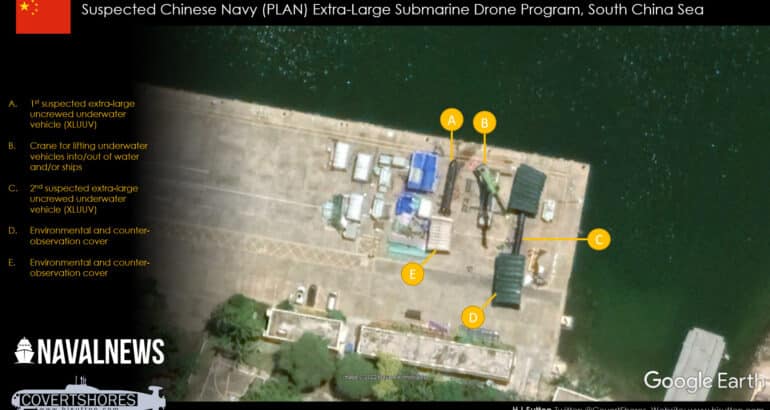 Click to enlarge. two previously unreported submersibles, believed to be extra-large uncrewed underwater vehicles (XLUUVs).
They were recently set up on the quay at a Chinese Navy base on Hainan, South China Sea.
Satellite Image from July 31 2022 by Maxar Technologies, via Google Earth.
From Naval News by H I Sutton

China's naval expansion may have a key program which was not previously reported.
Secretly deployed to the South China Sea, two unknown underwater vehicles have been seen at Sanya naval base.
This may be the first indication of a much larger program.
The U.S. Navy and Royal Navy are both pursuing extra-large uncrewed underwater vehicles (XLUUVs).
These drone submarines are widely seen as a key part of tomorrow’s fleet.
And the early movers may have a significant advantage.

It is no surprise that the Chinese Navy (PLAN) also appears to have a corresponding program.
Yet no details have been available until now.

Satellite imagery of Sanya naval base on Hainan in the South China Sea reveals two XLUUVs.
The two vehicles have been present since March-April 2021, but have only come to light now.
The arrangement indicates trials or testing.
Sanya is part of a series of important naval bases in the area and is home to operational submarines.
The quay where the new XLUUVs have been seen is near to where China previously based midget submarines. 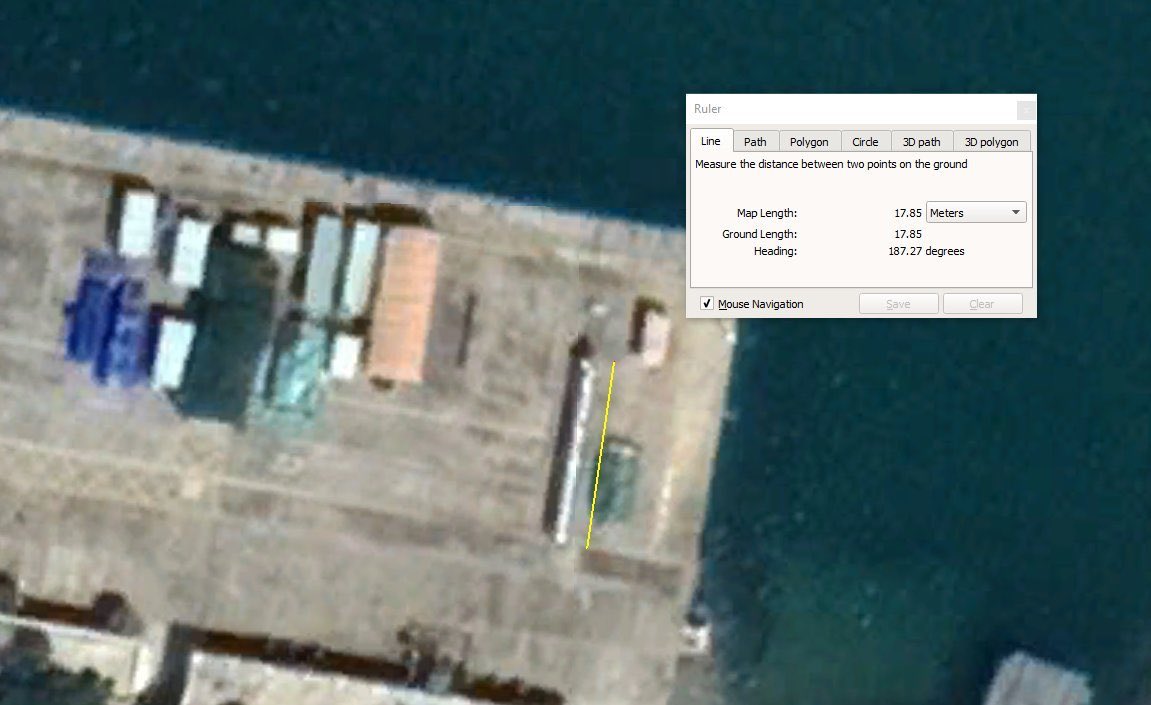 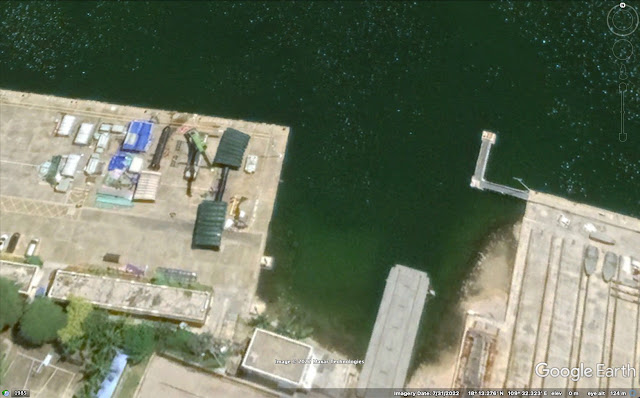 Google Maps
The high-resolution imagery, taken by Maxar Technologies’ satellites, is available in Google Earth. Google Earth is one of the oldest Open Source Intelligence (OSINT) tools in the defense space.
With the advent of near-daily satellite passes from other sources it can be overlooked, but checking its latest updates can yield rewards.

Our preliminary assessment points to the two black objects being XLUUVs (Extra-Large Uncrewed Underwater Vehicle).
These are too small to be regular submarines, and too large to be swimmer delivery vehicles (SDVs).

The two submersibles are different sizes and appear to be significantly different designs.
This suggest a competitive trial of different prototypes or demonstrators.

The first XLUUV is around 16 meters (52 feet) long and 2 meters (6.4 feet) across.
It has a streamlined bow. At its tail, it appears to have two propellers (screws) in a side-by-side arrangement.
This is interesting because it may indicate a link to the HSU-001 LDUUV.

(Large Displacement Unmanned Underwater Vehicle).
The HSU-001 was first shown in public in September 2019 and is believed to be in service with the PLAN, although few details have emerged since.
The new vehicle is more than twice the size however. 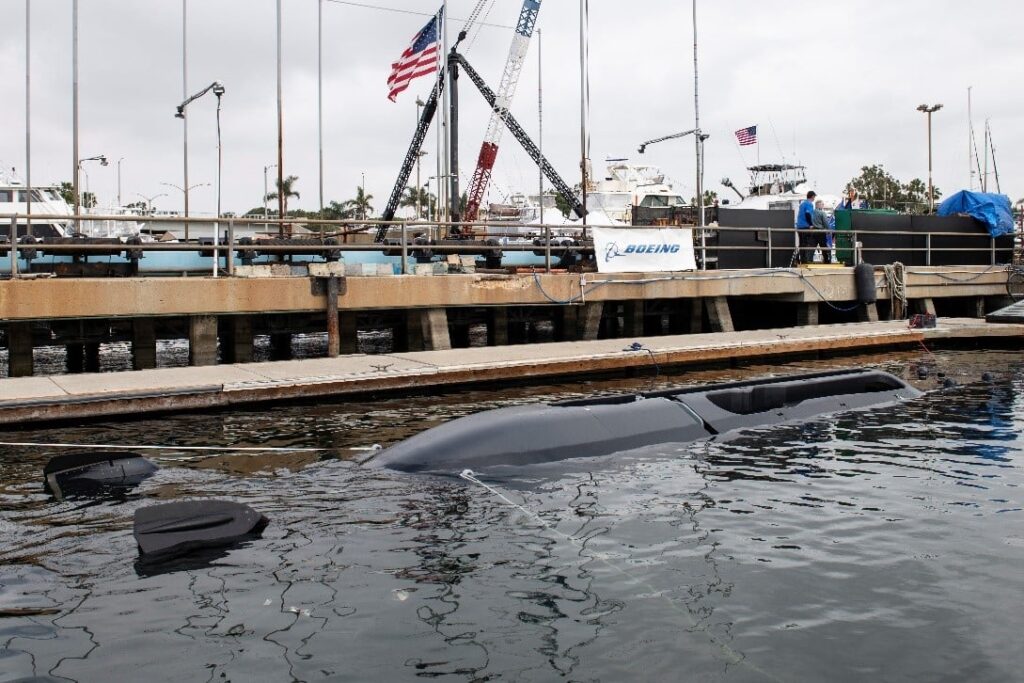 The Orca XLUUV Test Asset System prepares for the first in-water test following a christening ceremony April 28, 2022, in Huntington Beach, California.
The Orca XLUUV program is tailored to address joint warfighting needs with a sense of urgency.
Boeing photo.
The new submersible’s size is very similar to the U.S. Navy’s Orca XLUUV.
Developed by Boeing, that system is seen as the first-mover in this space.
However the first Orca was only christened in April, while it appears that the PLAN have had their prototypes in the water since 2021 or earlier.

The other XLUUV is outwardly simpler in form. It is much slimmer but also longer, around 18 meters (59 feet).
This design is reminiscent of Lockheed Martin’s contender for the U.S. Navy’s Orca XLUUV program.

XLUUVs are widely seen as key naval technologies which might shape future conflicts.
Like existing mid-sized UUVs they can perform ISR (intelligence, surveillance and reconnaissance) missions.
Their greater size however should translate into much longer ranges.
It also opens up other roles, such as offensive minelaying, anti-submarine warfare and transport.

As is the nature of intelligence, the new vehicles may turn out to be something other than XLUUVs.
However whatever they are, they are likely interesting and relevant for defense analysts.

China has been building up and modernizing its Navy for the past 20 years.
This has included a number of advanced underwater vehicles, some of which have not been publicly acknowledged.
So while this latest program may come as a surprise, it shouldn’t.
It is a reminder of China’s growing naval power and ambitions. And that it can build up new capabilities in relative secrecy.
Links :
Posted by geogarage at 1:17 AM