Temperatures in the tropical eastern Pacific Ocean rise and fall in a cycle known as the El Niño–Southern Oscillation.
Image credit: NASA Johnson
From  IFL science  by Tom Hale

The mighty weather phenomenon La Niña will continue for the third year in a row and may last until early next year, according to World Meteorological Organization (WMO).
This is set to have a knock-on effect on weather across the globe, from droughts in Africa to a wet and wild summer in Australia. 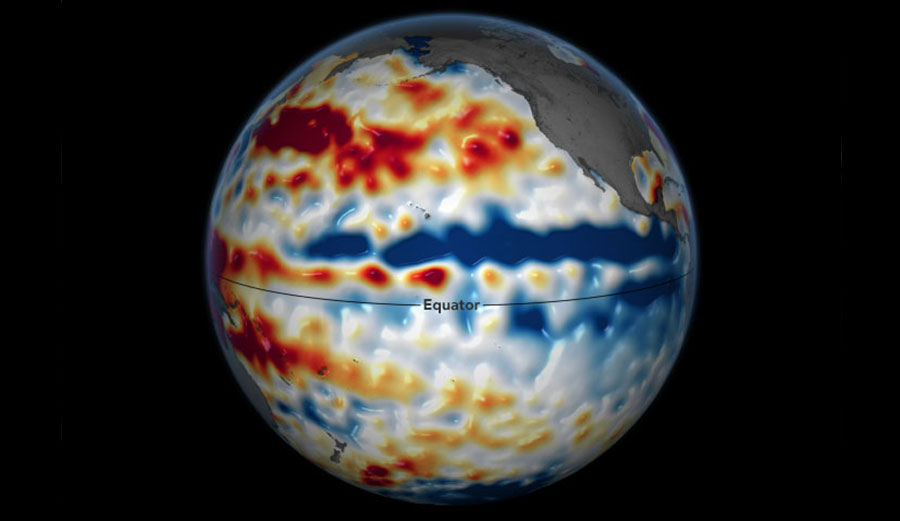 WMO is predicting a rare “triple-dip”La Niña phenomenon, where La Nina conditions persist for three consecutive years.
Image: NASA
Triple-year La Niña events are extremely rare, although not totally unheard of.
La Niña conditions typically last under a year, although they can be seen in two consecutive years occasionally.

Three years, however, is deeply uncommon.

Since records began, a “triple dip” of La Niña has only been reported a few times: from 1973 to 1976, and 1998 to 2001.
Some also include the conditions that persisted from 1954 to 1957.
“It is exceptional to have three consecutive years with a La Niña event,” Professor Petteri Taalas, WMO Secretary-General, stated in a statement.

Temperatures in the tropical eastern Pacific Ocean rise and fall in a cycle known as the El Niño–Southern Oscillation.
The cooling phase – with below-average sea surface temperatures across the east-central Pacific – is referred to as La Niña, which means "the girl" in Spanish.
El Niño, meaning "the boy," refers to the warm phase when the Pacific's warmest surface waters sit offshore of northwestern South America.
There is also a neutral stage that occurs in between phases.

These changes disrupt the wind, cloud, and pressure patterns over the Pacific, triggering a cascade of effects that can be seen in the weather across the globe.

The triple-year La Niña is set to have an especially profound effect on the east coast of Australia.
The Bureau of Meteorology has warned that eastern Australia should be prepared for heavy rainfall this spring and summer.
Paired with this, we can also expect to see the east coast hight by more severe flooding and perhaps even cyclones
"I would bet my bottom dollar that there will be more flooding in eastern Australia in the next six months.
The climate patterns in the Pacific, Indian and Southern Oceans are all pointing to a wet spring.
Since the rivers and dams are already full, any significant rainfall will likely lead to floods,” commented Kimberley Reid, an atmospheric scientist from the ARC Centre of Excellence for Climate Extremes at Monash University.
“The chances of significant cyclones and storms are higher for the forecasted conditions this upcoming season.
In the worst case, we can expect levels of erosion similar to 1974 when conditions were similar with three back-to-back La Niña events," added Dr Javier Leon, a geographer at the University of the Sunshine Coast.
Links :
Posted by geogarage at 1:48 AM