Behind each map, a story. The cartography of the Strait of Magellan between science and imagination

Antonio_Pigafetta_Magellanstrasse_1520
From CartoNumérique by Sylvain Genevoix
The Strait of Magellan, which separates the South American continent from the large island of Tierra del Fuego, is named after Fernando de Magellan, the Portuguese navigator who discovered and crossed it in 1520 when he made the first circumnavigation of the Earth (1519-1522).
This strait of 611 kilometers is the longest and most important natural passage between the Atlantic and Pacific Oceans.
This passage remained strategic for a long time until the Panama Canal was put into service.
Its mapping took time; it reflects the progress of European nautical cartography between the 15th and 18th centuries.
It testifies to the curiosity and the geographical imagination but also to the rivalries of the great European powers to dominate the region at the time of the "Great Discoveries" ("to discover is to possess" as the historian Romain Bertrand shows).

The Miller Atlas published in 1519 represents in six richly illuminated maps the world known to the Europeans just before Magellan's expedition.
It can be noticed that the Portuguese cartographers, by representing an immense southern continent, voluntarily closed the option of bypassing the Americas: at the beginning of the 16th century, the Strait of Magellan was not yet known. 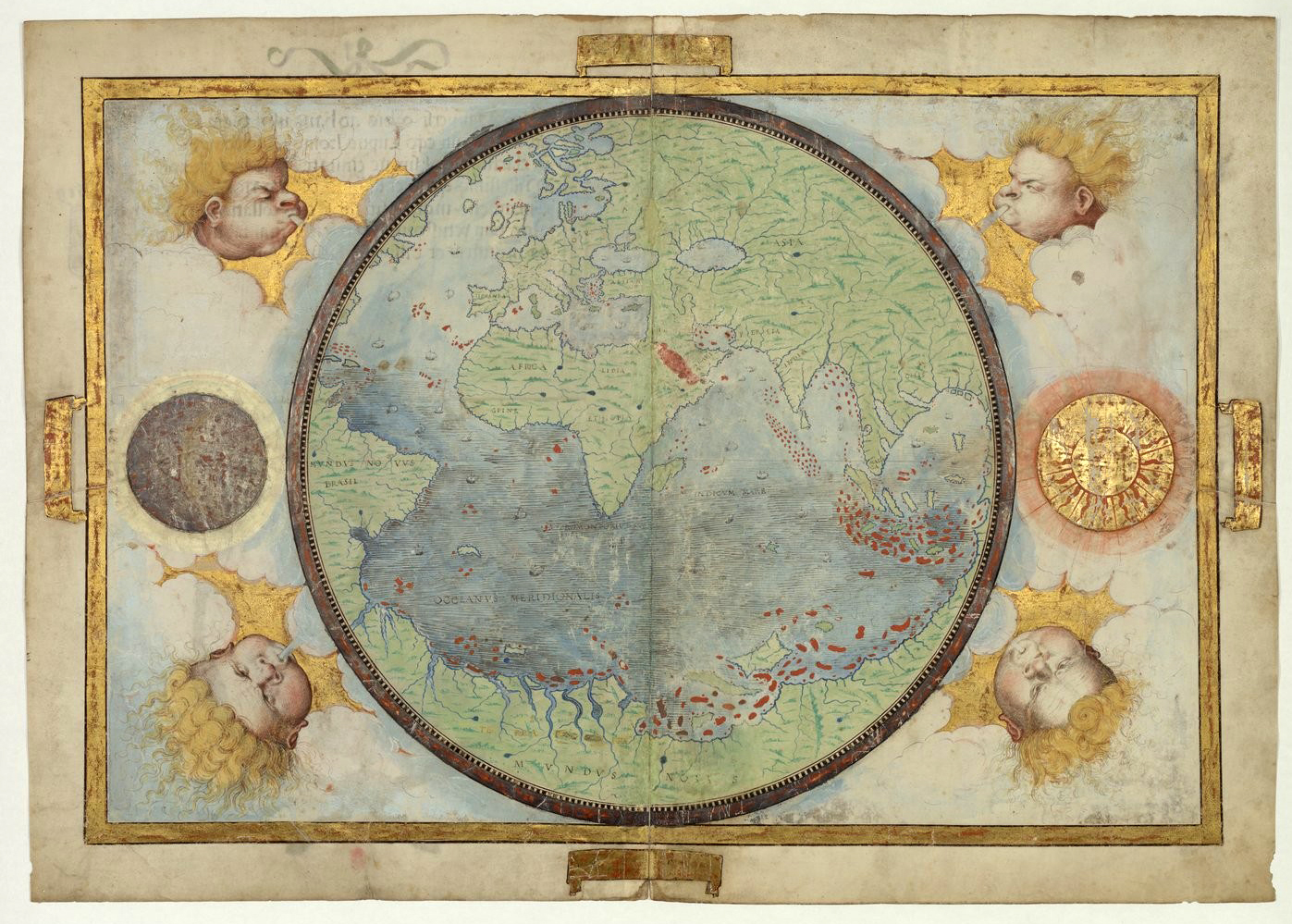 Extract from the Nautical Atlas of the World, known as the Miller Atlas, published in 1519 by Portuguese cartographers (source: Gallica)
As the historian José Manuel García shows, the discovery of the Strait was a key moment in the time of Magellan's expedition and in the way this region of the world was represented:

"It can be said that this was the crowning achievement of the much sought-after link or passage between the Atlantic and the Pacific.
Ferdinand Magellan promised the Emperor Charles V - Charles I of Spain - that, just as the Portuguese had found a connection between the Atlantic and the Indian Ocean at the Cape of Good Hope, he would be able to find, more or less at the same latitude of about 34 or 35° S - which corresponds to the latitude of Rio de la Plata - a passage linking the Atlantic to the Pacific.
He did not find it at this latitude, but much lower at 52 or 53° S and at the price of many sacrifices.
You have to take latitudes into account to really understand that this is a fantastic feat."
For Mauricio Onetto Pavez (Historia de un pasaje-Mundo. El estrecho de Magallanes en el siglo de su descubrimiento, 2018), the Strait of Magellan is the last piece of a puzzle that was not yet complete, and whose resolution set in motion a series of global processes: movement of people, trade routes, development of modern science.
During the passage of the strait, a "passage of the world" would have been created.
The proposal situates in the crossing of the Strait the founding event of the "globalization" that we are experiencing today.

The first map of the Strait in 1520 (see above) by Antonio Pigafetta, one of the 18 survivors of Magellan's expedition, shows the region and the Patagonian Strait (source: Wikipedia).
The "Maps and Plates of the First Voyage Around the World by Pigafetta" (1519 to 1522) are available on Gallica.
They correspond to the maps and ornamented figures of an edition of 1800 by Hendrik Jansen.

In 1520, Magellan encountered difficulties in exploring the strait which is more than 600 km long.
It takes more than a month to cross the passage which is a maze of fjords.
In the middle of the strait, Estêvão Gomes, pilot of the San Antonio, rebelled with his men and even deserted with one of the ships of the fleet.
Esteban Gomez will be charged by Charles V in 1524 to try to find a passage further north, but without success.
It is from these elements that the cartographer Diego Ribero will be able to elaborate his map of 1529 "of all that has been discovered in the world until now", with the contours of North America
In the maze of fjords, surrounded by "threatening" cliffs, with "sinister" waters, the accounts indicate that during the crossing of the strait by Magellan in 1520, the sailors saw numerous smokes inland.
The Tierra del Humo (in French: Terre des Fumées) which appears on the maps after the voyage, later becomes the Tierra del Fuego (Land of Fire).
The strait, first named "Channel of All Saints", quickly took the name of Strait of Magellan in honor of the navigator.
If the Strait of Magellan will make the fame of the navigator, he will lose two ships there before perishing himself two years later in the Philippines archipelago, so that Magellan never realized himself the tour of the world.
The southern continent, also called the "Magellanic continent" in reference to Magellan who sailed the Atlantic and the South Pacific, was to fuel a whole geographical imagination during the 16th and 17th centuries.
We find the "Magellanic Land" for example on Coronelli's globes in the 1670s to designate Antarctica. For M. Robert, who published a revised version of the Introduction to the Geography of Sieurs Sanson in 1743, "the Magellanic continent can only be called Antarctic or antiseptal as opposed to the Arctic.
The map of the Strait of Magellan (1670) by J. F. Bernard expresses well the mental universe in which one perceived this region of the world still in the XVIIth century.
The comments on the "good lands" and the "fire-starting savages" (the origin of the name of Tierra del Fuego) show that the region contains resources but that it is marked by the cold and the difficulties of navigation, in the middle of hostile tribes.
The Land of Fire is described as "a hostile and miserable country where everything is covered with snow and the air is very cold". 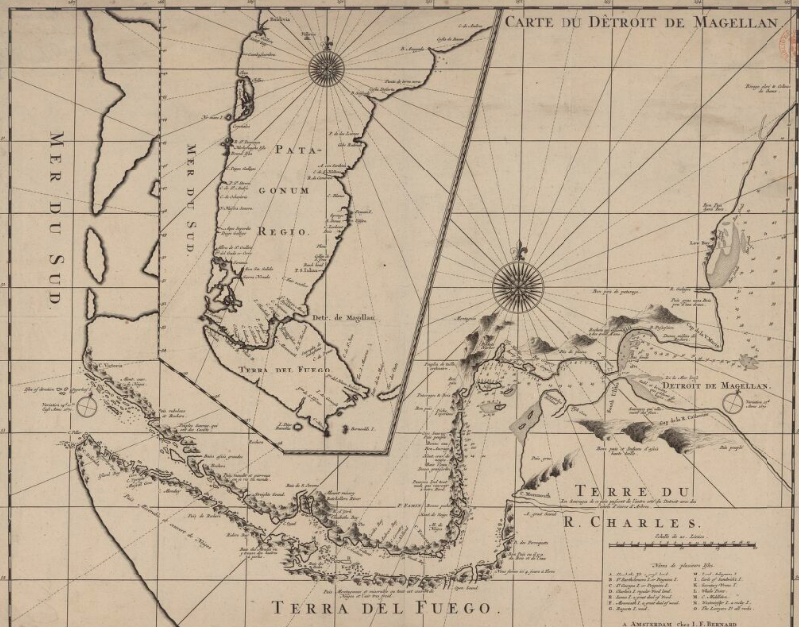 Map of the Strait of Magellan by J. F. Bernard - 1670 (source : Gallica)
This is another striking representation of Tierra del Fuego and Patagonia (1646) by cartographer Alonso de Ovalle.
The east-facing map features views of landscapes, wild animals and monstrous creatures.
On Tierra del Fuego, a half-man, half-animal creature is depicted shooting with a bow.
One of the hypotheses generally accepted today traces the term Patagon to the character of the chivalry novel Primaleón de Grecia called "Patagón".
Magellan, who was certainly familiar with this novel, would have associated this half-man, half-animal creature with the natives he met, notably because of their dress and their consumption of raw meat. 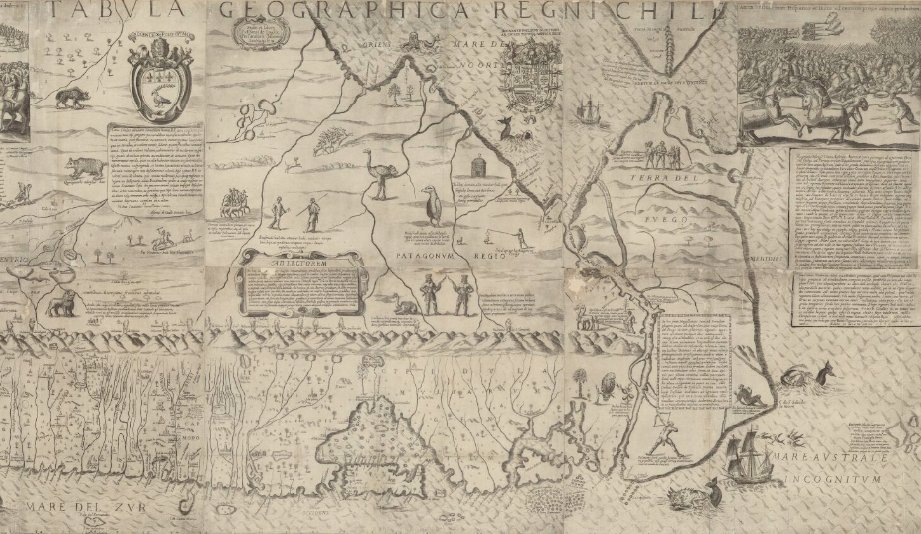 Tabula Geographica Regni Chile by Alonso de Ovalle - 1646 (source: Gallica)
The Patagonians, described by Antonio Pigafetta as "giants with big feet", became a mythical tribe.
A trace of them can be found on the map of South America by Hondius (1630), which represents a Patagonian colossus crossing an unknown region with great steps.
Until the end of the 17th century, maps of the Americas called this region of South America regio gigantum ("region of the giants" in Latin).
European descriptions of the region fed the myth for 250 years before being discredited at the end of the 18th century, even though Francis Drake had already observed in 1578: "The savages are not so big as the Spaniards say." 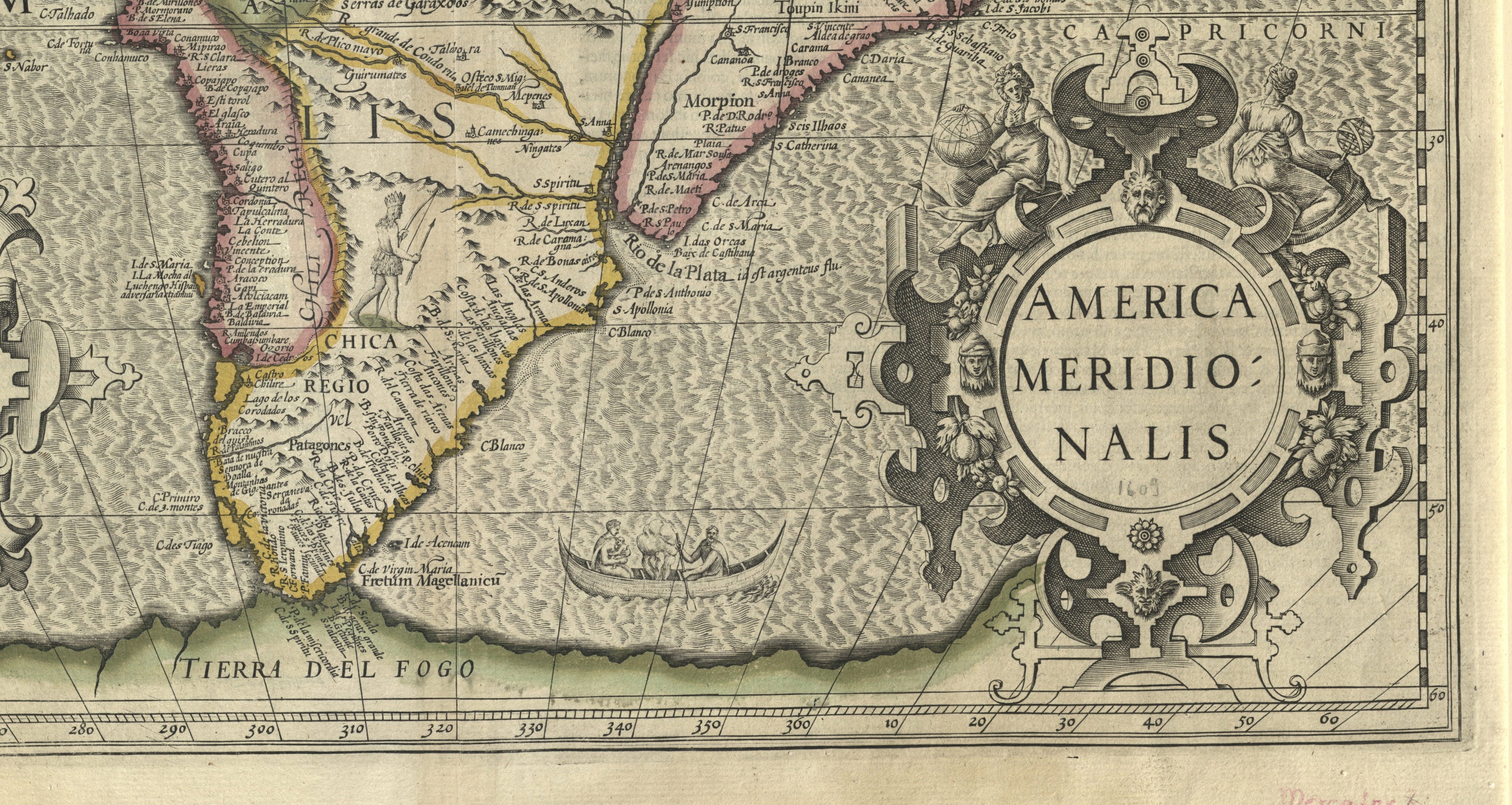 Extract from the map of South America by Hondius - 1630 (source: Wikipedia)
The same Francis Drake, a privateer in the service of Queen Elizabeth I of England, made the third circumnavigation in history between 1577 and 1580, after those of Magellan-Elcano between 1519 and 1522, and García Jofre de Loaísa between 1525 and 1536.
His name is attached to one of the capes of the region, although he probably never reached Cape Horn. South of Tierra del Fuego, the Drake Passage, opened in 1616, was also named in his honor.
Drake thought he had failed on islands that he named Elizabeth Islands and that turned out to be ghost islands that never existed.
We can find traces of Elizabeth Islands or "Elisabethides" until the 18th century, for example on the map of South America by Thomas Jefferys. 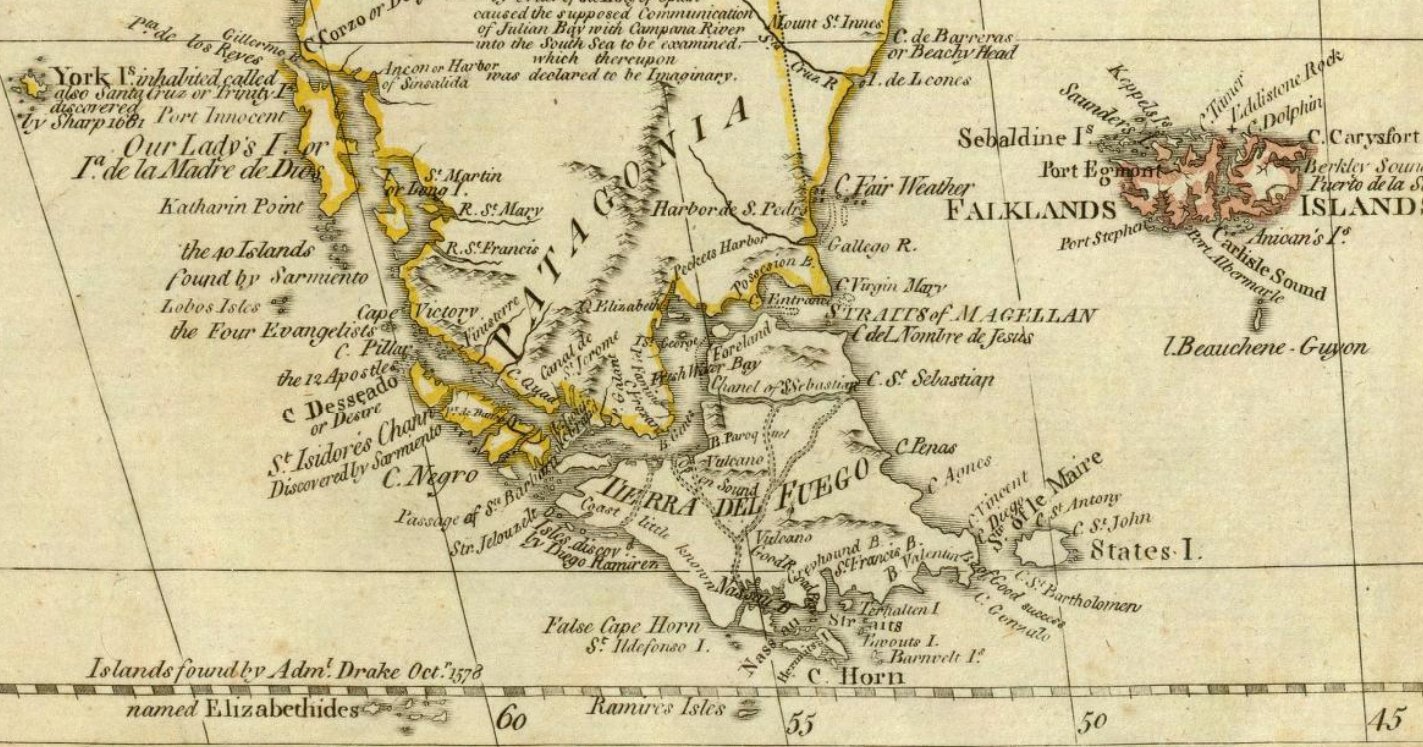 Map of Paraguay, Chile and the Strait of Magellan drawn by Guillaume de l'Isle - 1717
(source : Gallica)
References to Magellan go beyond the designation of the Strait and apply to a whole region from Patagonia to Tierra del Fuego.
The "Magellanic Land" on the map drawn by Guillaume de l'Isle (1717) refers to the immense region that goes from the "Land of the Pampas" to the "Land of the Patagonians" (present-day Argentina).
On some maps, reference is even made to a "Magellanic Sea" or "Southern Sea" (see on the Gallica site the different representations of the "Magellanic" or "Magellanica").
Today the term "Magellanic" covers the southern part of Patagonia which corresponds to the southern half of the province of Santa Cruz in Argentina, Tierra del Fuego and the 12th Chilean region called "Magallanes and Chilean Antarctica" (south of 49° S).
The term is found through a biogeographic formation, the subpolar Magellanic forests, which constitute a specific ecoregion in southern Argentina and Chile.

Map of Paraguay, Chile and the Strait of Magellan drawn by Guillaume de l'Isle - 1717
(source : Gallica)
From the second half of the 18th century, the first "geometric maps" appeared, which were collected during scientific expeditions.
These maps allowed for the correction of latitudes and distance measurements for several bays of the Strait of Magellan.
Bougainville was very proud to be the first Frenchman to have entered the "South Sea" through the Strait of Magellan.
His map (facing south) includes detailed surveys of the Strait that he took 50 days to cross. It is a true taking of possession.
Since Magellan, the entrance to the Strait symbolically opens up into "Possession Bay", a bay open to all winds and not very suitable for anchoring.
He also recognized "the bay to which the unfortunate fate of the Spanish colony of Philippeville, established around the year 1581 by Sarmiento, gave the name of Port Famine".
He established an anchorage in the "French bay named by M. de Gennes".
He even went so far as to baptize a bay with his own name "Bougainville Bay".
The map shows that a part of the strait is abundantly "covered with woods", the rest is only "Desolation of the South" (see the descriptions that he gives of the region in his work Voyage de Bougainville autour du monde, I, IX).

Map of the Strait of Magellan drawn and corrected on the voyages of the vessels l'Aigle in 1765, l'Étoile
and l'Aigle in 1766, la Boudeuse and l'Étoile in 1767 and 1768 (source : Gallica)
The Strait of Magellan became very early a stake of rivalry at the international level.
The map of La Borde (1790) intends to show the part taken successively by the "French, English, Spanish and Dutch travelers and mainly Mrs. de Bougainville, Byron, Wallis & Carteret". Laborde's map is largely inspired by the map elaborated in 1769 from the observations of La Cruz Cano El Olmedilla, Carteret, Wallis, Byron and Bougainville (republished in 1775). 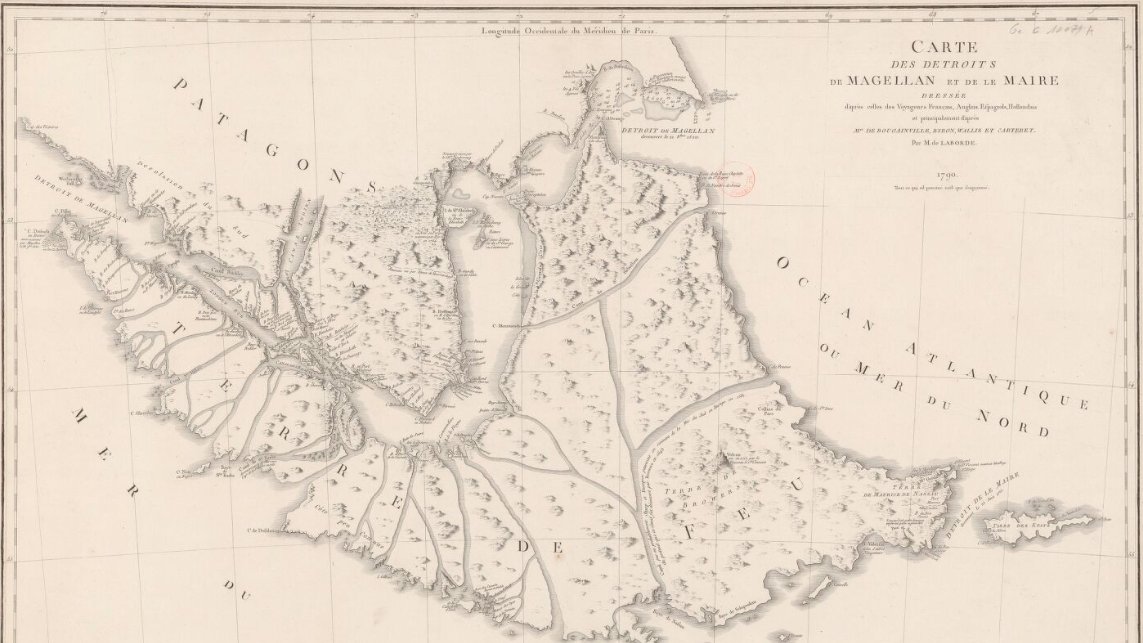 Map of the Straits of Magellan and Le Maire drawn by M. de Laborde - 1790 (source : Gallica)
It was not until the border treaty of 1881 between Chile and Argentina that the dispute over Patagonia and Tierra del Fuego began to be settled.
The Strait of Magellan was declared "terra nullius", a legal status that it still has today.