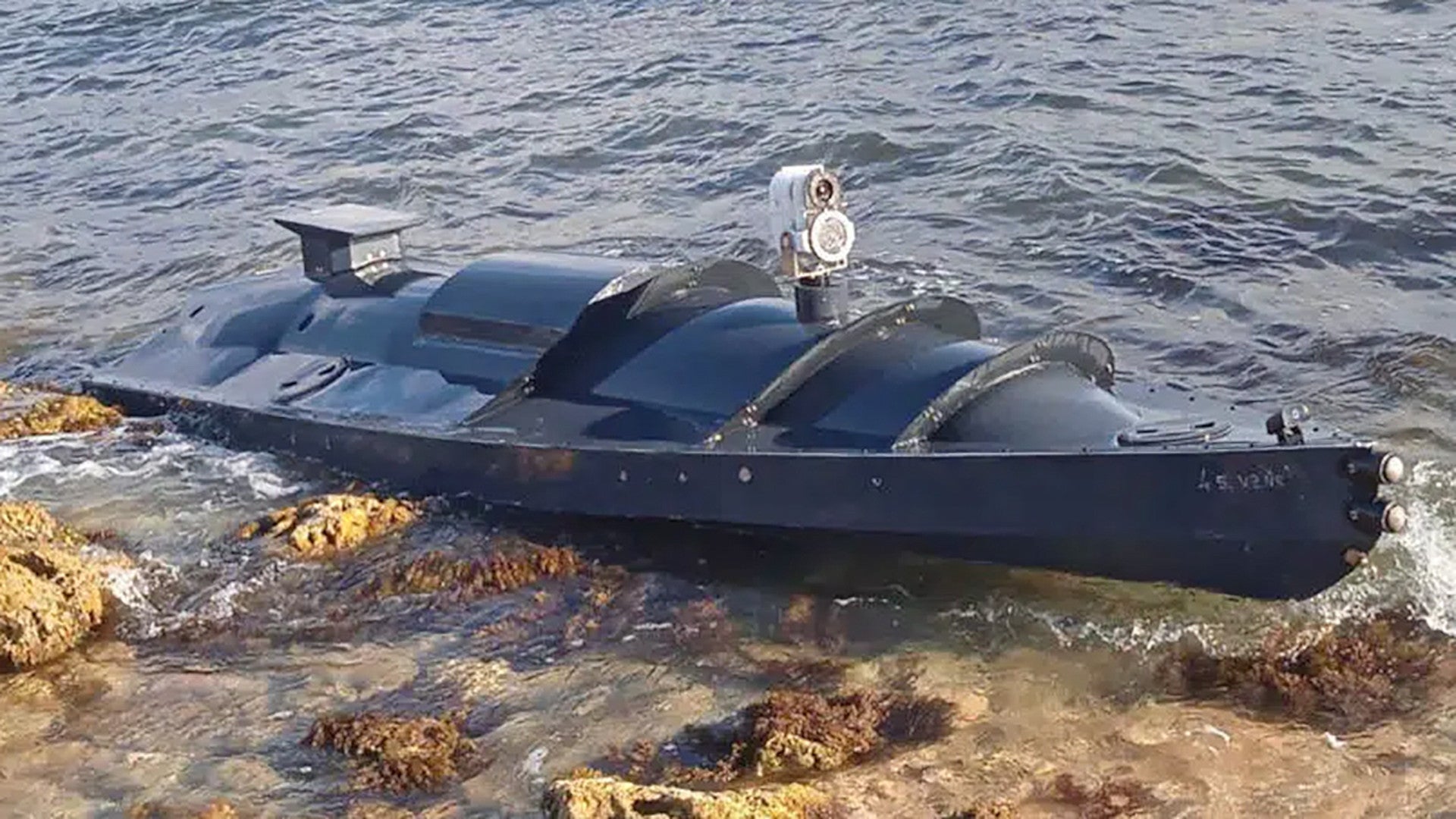 From TheDrive by Joseph Trevithick

Russian authorities on the occupied Crimean Peninsula claimed to have destroyed an unmanned surface vessel, or USV, near the city of Sevastopol, which is home to the headquarters of the Russian Navy's Black Sea Fleet.
Pictures showing what could be the maritime drone in question, which has a number of features that could point to being an uncrewed explosive-laden suicide boat, washed up on a beach have emerged on social media.
A Russian Navy Project 775 Ropucha class large landing ship, examples of which are known to be stationed in Sevastopol, is seen in the background of one of the images, lending further credence to the reports they were taken near the city. 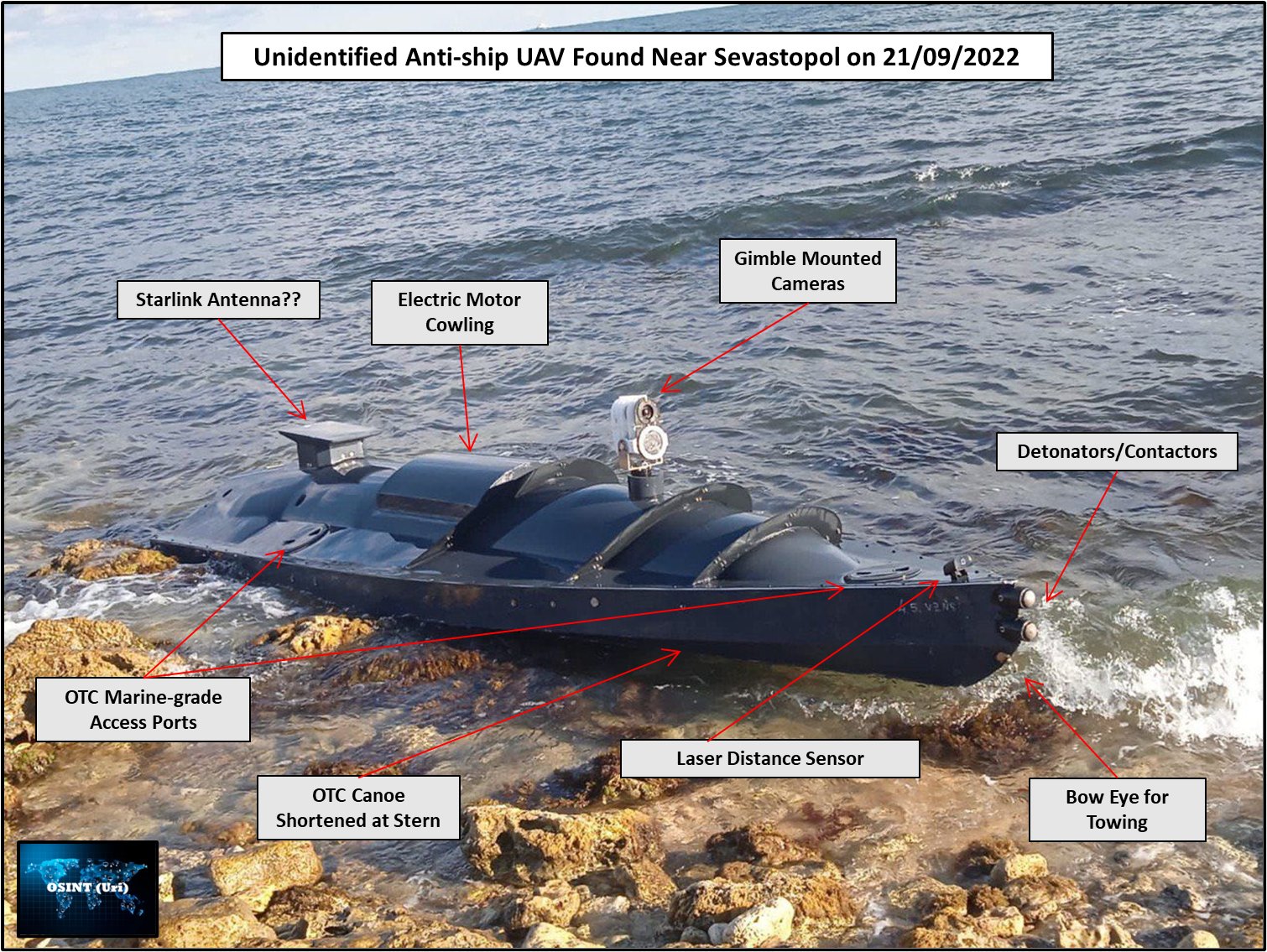 @UKikaski
Based on the pictures of the drone boat that have appeared online so far, which are seen below, it appears to be a relatively small, low-profile, and shallow-draft design with what looks like a single small waterjet drive system.
There is what appears to be a multi-camera sensor system mounted on top of the middle of the USV's hull.
A square-ish shaped flat object, which some have noted looks similar in some broad strokes to a SpaceX Starlink satellite internet antenna, is seen on top of the boat toward its stern, which could be an antenna connected to a communications/data-sharing suite.
What may be a smaller camera on top of the bow, as well as two small domes right at the prow, could be part of the USV's navigation system, be additional sensors, or have other purposes. 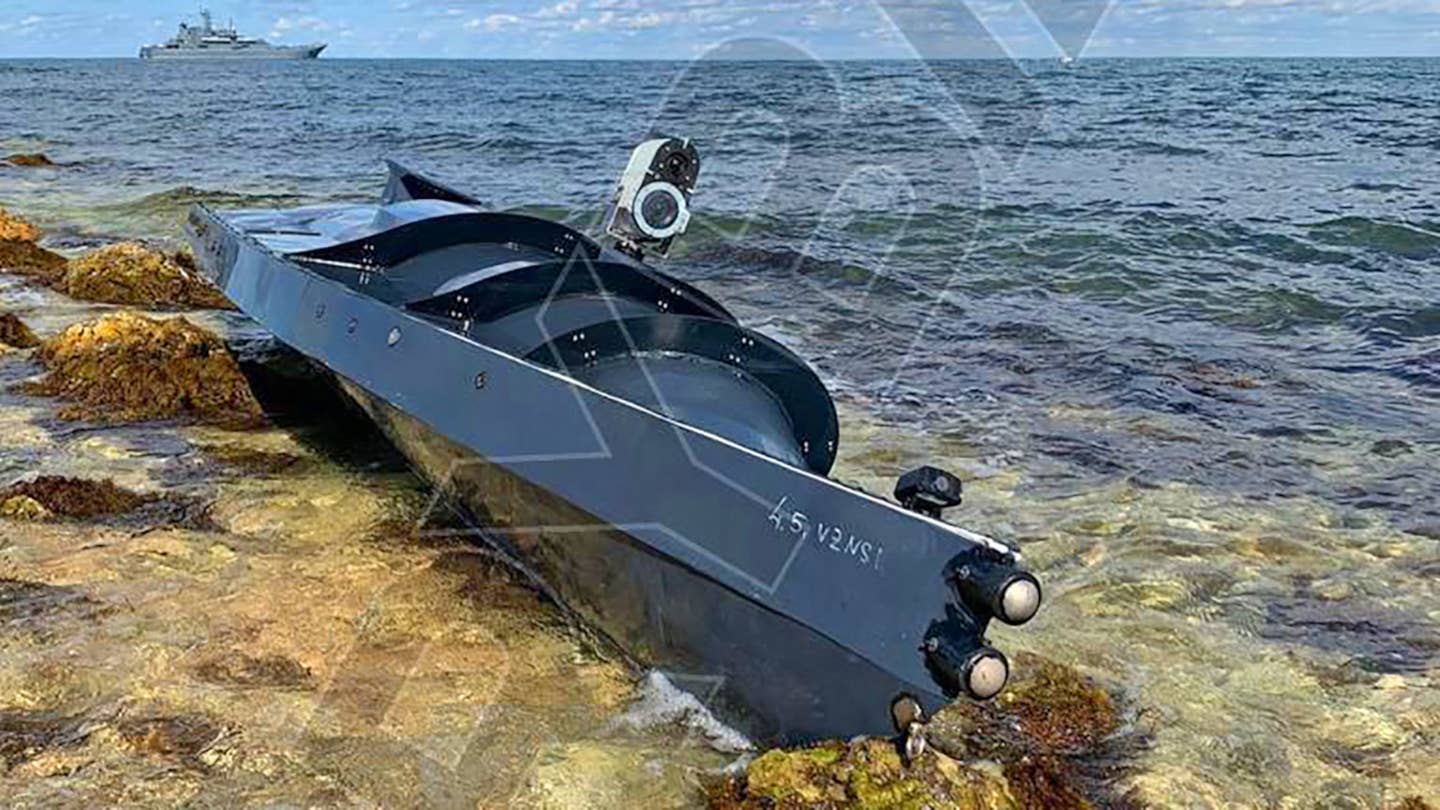 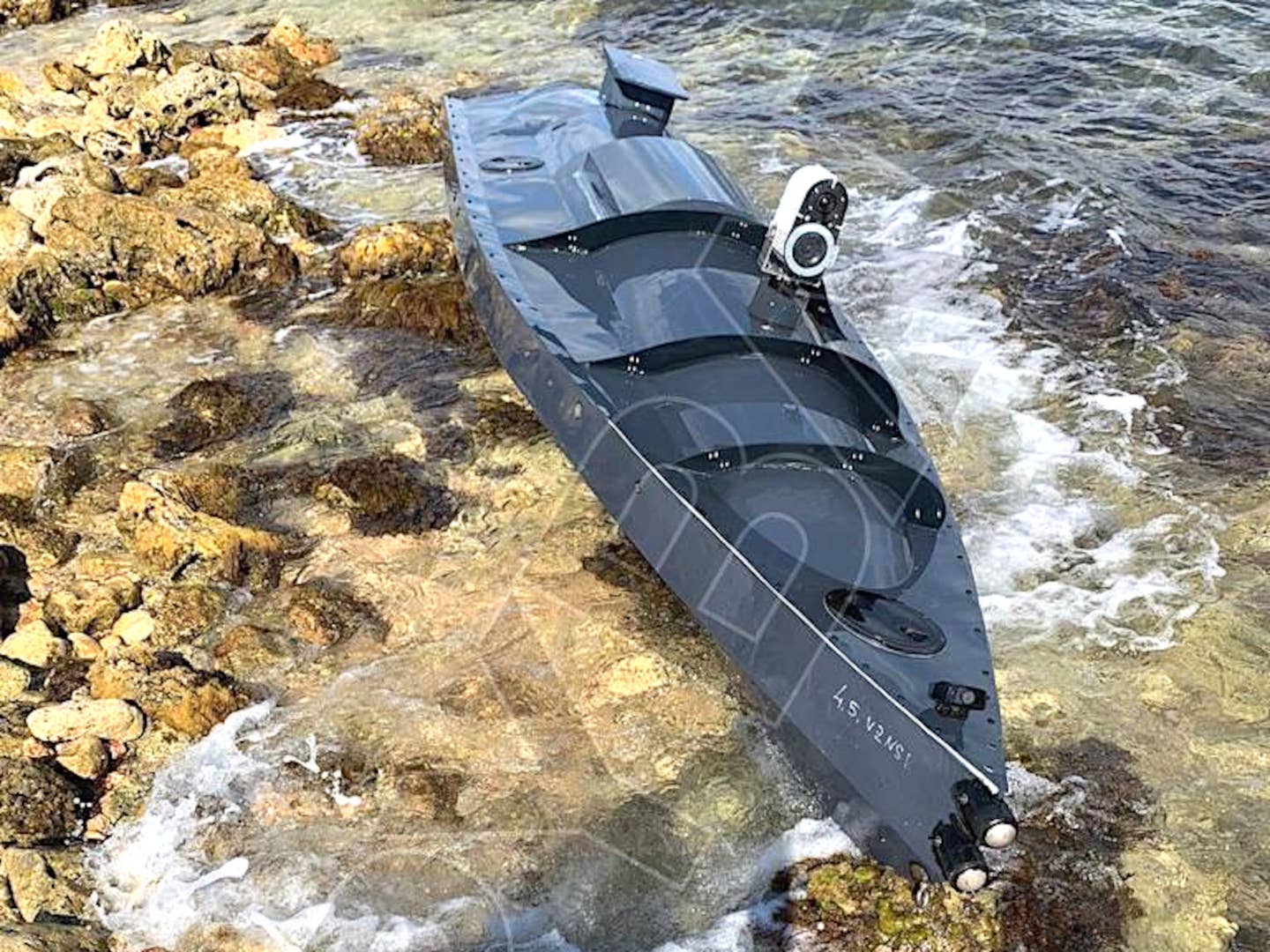 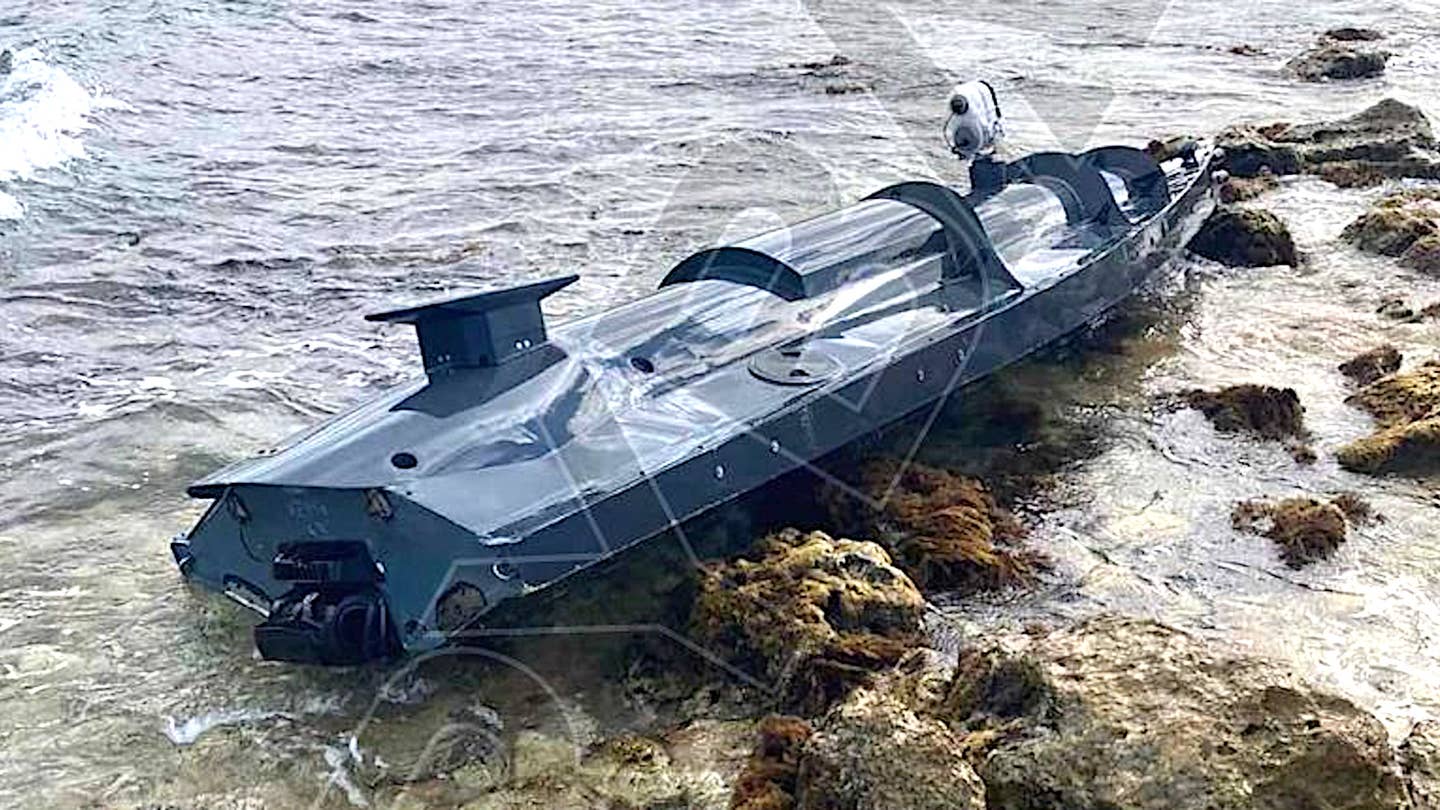 Via Twitter
Altogether, from what we can see immediately, the USV could be configured for surveillance and reconnaissance-type missions.
Ukrainian special operators are known to be conducting waterborne raids in southern Ukraine, among other areas.
So, this drone boat could provide valuable information about a target area before a mission, offer additional situational awareness while it is being conducted, and help with the post-mission damage assessments.

With all this in mind, it is interesting to remember that "unmanned coastal defense vessels" were part of a military aid package for Ukraine that the Pentagon announced back in April.
The War Zone has reached out to the U.S.
Department of Defense again for more information about those USVs, but American officials have declined to provide any details in the past.

"It's an unmanned surface vessel that can be used for a variety of purposes in coastal defense.
I think I'll just leave it at that," was all then Pentagon Press Secteray John Kirby would say at a briefing on April 13.
Surveillance and reconnaissance capabilities would certainly be in line with a coastal defense mission set.

However, it is not possible to rule out that the USV seen in the pictures that popped up on social media today might be entirely unrelated to the U.S-supplied USVs and have other capabilities.
In fact, it has a number of features that could point to it being more of a weapon than a surveillance and reconnaissance platform.
For instance, some observers have suggested that the two domes at the prow of USV, which could itself be based on a commercial motor canoe design, might be contact detonators that set off an explosive change after it hit a large object, such as an enemy ship.
The sensor on the bow may be a laser range finding system to help gauge the distance to the target.

Ukrainian forces have already demonstrated their ability to turn commercially available drones into impromptu cruise missiles.
it would not be surprising that there is interest in Ukraine in a broadly similar maritime capability, something that Iranian-backed Houthi militants in Yemen long ago proved is very feasible even for non-state actors to acquire an employ. 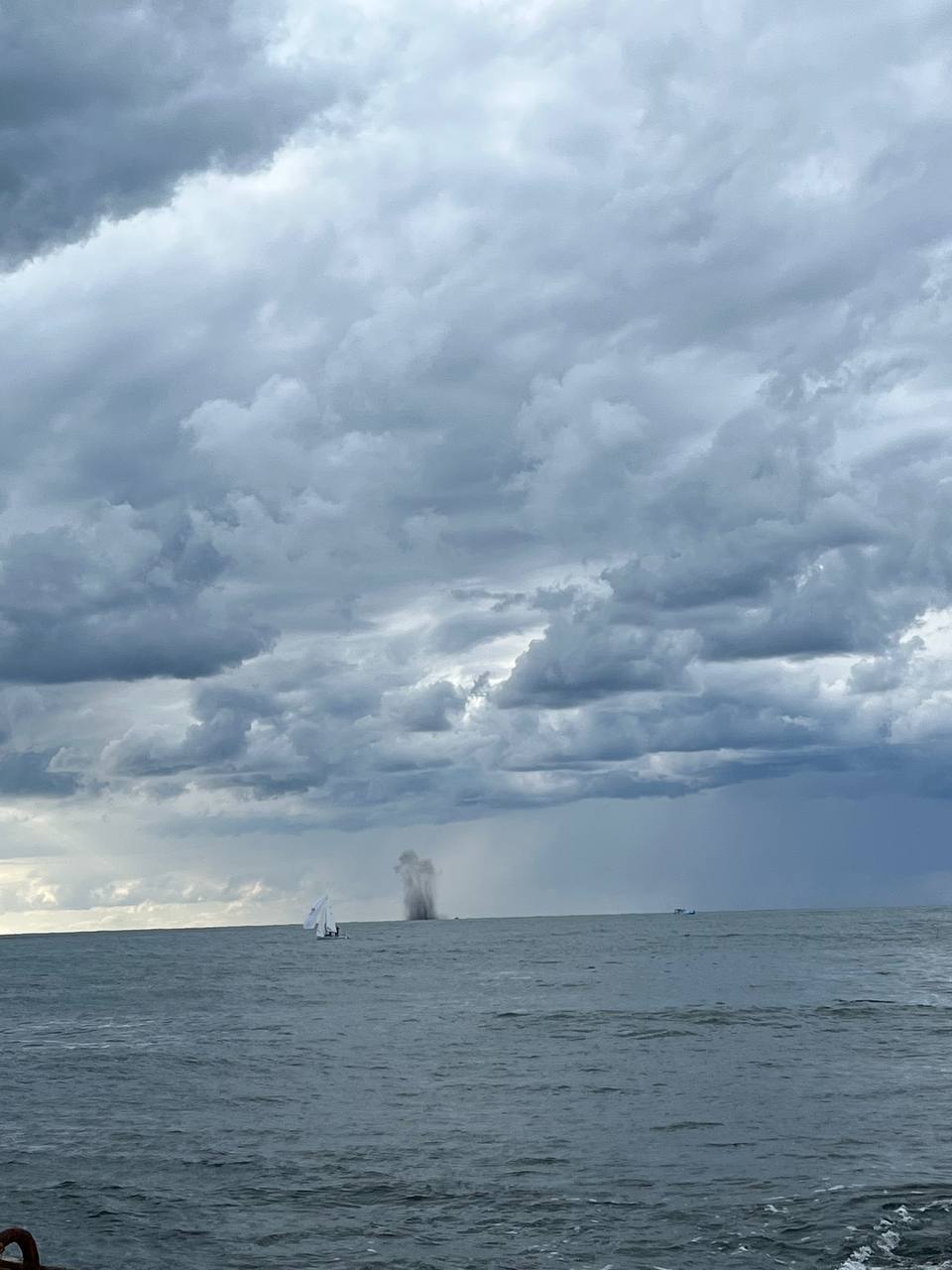 Earlier, an explosion occurred on the waters of the Black Sea, not far from Sevastopol.
Although some reports claimed that it was a controlled detonation of a sea mine, speculations have emerged that the appearance of a USV might be in some way connected to the blast.
@Archer83Able

Explosive-filled USVs would given Ukraine's armed forces a valuable additional tool for attacking Russian warships and other smaller watercraft, especially when it comes to targets that might be outside of the range and/or engagement envelope of ground-launched anti-ship missiles like the domestically-developed Neptune or the U.S.-made Harpoon.
A low-profile, shallow-draft design with a waterjet to give it a relatively fast top speed could be well suited to attacks on targets inside heavily defend port areas, like Sevastopol, too.

While the exact circumstances of how the drone boat came to be on the beach are unclear, the Russian governor of Sevastopol did say earlier today in a post on social media that a USV had been destroyed after being detected near the city.
That followed reports of an explosion in the Black Sea just off the coast.
There have been subsequent reports that the blast was the result of a controlled detonation of a naval mine, which are certainly real threats in the region at present, but this remains largely unconfirmed.
At the time of writing, there are no clear indications one way or another that the blast and the beached USV are in any way related, or that this is the drone boat that authorities said was destroyed.

Regardless, it's no secret that the Ukrainian military has actively targeted Sevastopol, and elements of the Russian Navy's Black Sea Fleet in particular.
There have been multiple drone strikes on Black Sea Fleet facilities in Sevastopol in recent weeks.

Crimea as a whole has been subjected to an increasing number of significant attacks in the past two months or so, including what Ukrainian authorities say were missile strikes that devastated Saki Air Base just to the north of Sevastopol in August.
Just this week, it emerged that the Russian Navy looks to have relocated its Kilo class submarines from Sevastopol to bases on the Black Sea coastline of Russia proper, likely amid concerns about how close Ukraine's forces are getting to the Peninsula as they could push ahead with their southern counter-offensive.

It remains to be seen what additional details may now emerge about this USV.
If nothing else, it reveals the existence of a previously unknown uncrewed platform with multiple potential uses that Ukrainian are using in their ongoing fight against invading Russian forces.

Russian authorities are now saying that the USV that washed up on the beech near Sevastopol, or at least a part of it, was towed back out to sea and blown up, and that this was the blast that was observed off the coast.
“A part of an unmanned vehicle was discovered, which was examined by experts," Sevastopol Governor Mikhail Razvozhaev said, according to local media reports.
"After the survey was completed, this apparatus was destroyed at sea by an explosion.
No one was hurt."

That the drone boat was destroyed in a controlled detonation at sea would seem to indicate that it was carrying explosives, or at least that the Russians were worried that it might have been.
This, in turn, could lend additional credence to the USV being a suicide drone boat.