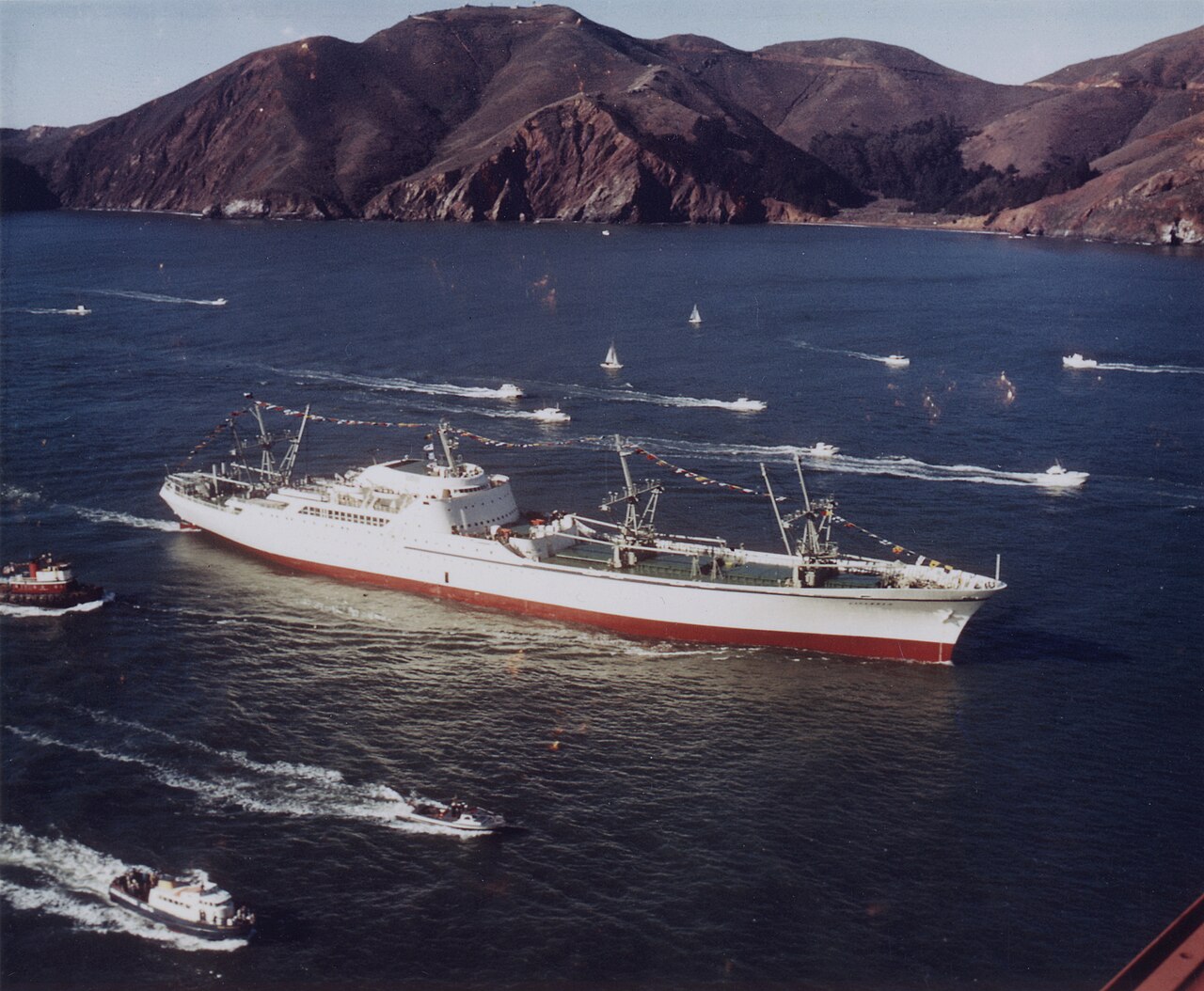 NS Savannah reaching the Golden Gate Bridge in 1962
From Marpro

The N.S. Savannah, the world's first nuclear-powered merchant ship.
At first glance, it looked like an ordinary cruise ship.
But there's one thing that sets this ship apart from any other.
Just a few meters from the passenger staterooms were a nuclear reactor

At first glance, the N.S. Savannah looked like an ordinary cruise ship.
With a pool for taking a dip, a dining room, and a lounge that doubled as a movie theatre.
But there’s one thing that sets this ship apart from any other.
Inside this unmarked space, just a few meters from the passenger staterooms was a nuclear reactor.
Something unheard of on a passenger-carrying ship before or since.
And it meant the N.S. Savannah could do incredible things.
Like circling the earth for years without ever stopping.

In the 1960’s, nuclear power was viewed as a revolutionary, near limitless source of energy.
But what was less certain, was whether putting a nuclear reactor aboard a civilian ship was really a good idea.

As one of the first ships powered by a nuclear reactor, N.S.Savannah was going to prove that nuclear power was a safe, clean, and near-limitless source of energy that could revolutionize ships.
Because to make one trip around the earth, a typical ship will burn through more than twenty thousand barrels of bunker oil.
All the while, billowing toxic smoke into the atmosphere.
The N.S.
Savannah was designed to make that same trip without burning anything at all.
Because it could circle the earth using just a few pounds of a new kind of fuel called uranium.

Replacing an oil-burning engine with a small nuclear reactor promised to make ships of the future more economical, faster, and more reliable.
It would also eliminate the need for large fuel tanks, freeing up more room for cargo and passengers.
Nuclear-powered ships could also travel for years on end before needing to refuel, and travel at much higher speeds.
Opening up new trade routes that could reshape maritime trade.
But despite all the promises of nuclear power, the world had good reason to be skeptical.

In the 1950s, nuclear really only meant one thing.
Its enormous destructive potential and the hidden dangers of radiation were widely feared.
Nuclear weapons had been around for nearly a decade, but the peaceful use of nuclear energy was still a new concept.
So in 1953, U.S. President Eisenhower launched the Atoms for Peace program.
In an effort to win over hearts and minds, research, funding, and equipment would be sent throughout the world to advance the peaceful use of nuclear energy.
And the N.S. Savannah would be built as a floating example of what an atomic-powered future could offer.
As the first of its kind, the ship would carry both passengers and cargo at the same time.

The N.S. Savannah was designed to look like the ship of the future.
From the teardrop-shaped superstructure to the streamlined cargo cranes, everything about this ship was designed to stand out.
But what really set it apart was the power plant.

The Savannah’s 74-milliwatt cylindrical reactor was designed with access from above for refueling.
Along with the pressurized water reactor, the primary coolant loop, and steam generator, it is housed in a 50-foot containment vessel encased in lead, concrete, and polyethylene.

To keep passengers and crew safe, mere meters from the reactor, engineers built-in layers of protection.
The reactor was surrounded by a primary radiation shield, a thick steel containment vessel, and a 500-ton biological shield.

To counter severe weather, Savannah featured one of the first ship stabilization systems, using hydraulically-actuated fins to counter rolling motions.
The ship also featured a reinforced hull and energy-absorbing structures to protect against a collision with another ship.

And in the unlikely event that Savannah was to sink, the reactor was designed to automatically shut down and one-way valves would flood the containment vessel with seawater, preventing radioactive material from escaping.
Engineers had thought of every possible disaster scenario and Savannah’s builders boldly claimed that they were shone of the safest ever built.

It only remained to convince the world.

Though it had taken six years to develop and build, Savannah surprised even its designers.
The reactor produced more power than anticipated.
The ship was designed to top out at 20 knots, but could easily surge along at 24.
Among the grimy, soot-covered merchant ships of the era, Savannah was undeniably striking.

In May of 1964, Savannah set sail on an ambitious world tour to demonstrate the merits of nuclear power.
Over the course of a year, it made visits to U.S. cities along the eastern seaboard and to over a dozen European ports, crossing the Atlantic several times in the process.
The ship traveled nearly 150,000 kilometers, using only 35 pounds of uranium.
Each time Savannah pulled into a new port, huge crowds formed to greet it.
In the first year alone, 1.4 million people lined up to tour the ship.
Savannah’s world tour had gone fantastically well, generating enormous public interest and plenty of positive press.
Savannah’s commercial operator was so happy with the ship’s performance, they urged Congress to fund another four nuclear ships based on Savannah’s design.
And back in the United States, additional crews were being trained in anticipation of serving aboard future nuclear ships.
If nuclear propulsion really was the future, momentum seemed to be building.
Savannah had made nuclear propulsion look easy, as the ship cruised effortlessly from port to port.

But hidden behind the sleek lines and gleaming white paint stood a harsh reality.
There was nothing straightforward about operating a nuclear ship.
Before Savannah could pull into a port, it needed special permission.
And the request had to be made months in advance.
And Ports often refused over safety concerns.
So behind the scenes, Savannah’s representatives would have to fly out well in advance to begin negotiating agreements.
Covering everything from how to respond if the ship were to cause a nuclear accident, to who would be liable.
Gut-level scepticism about floating nuclear reactors wasn’t going to disappear overnight.

The unusual half-passenger half-cargo configuration meant the ship wasn’t good at carrying either.
The passenger accommodations took up a lot of space, while the cargo holds were too small.
And with so much emphasis having been placed on an eye-catching design, the ship’s sleek lines made cargo handling difficult.

Savannah also needed a highly-trained crew about a third larger than on a conventional ship.
For a ship built to prove that nuclear power could be commercially viable, Savannah seemed to do the opposite.
Even as the ship’s operator publicly boasted about Savannah’s performance, their operating costs were heavily subsidized, consuming millions each year in taxpayer money.

But in one very important way, the Savannah could still be considered a success.
Because It helped inspire other countries to build their own nuclear-powered ships.
In 1964, West Germany launched the NS Otto Hahn.
In 1976, the Japanese launched Nuclear Ship NS Mutsu.
And, a fourth, the Soviet Union nuclear cargo ship was built in the 1980s.
But, public protests led to the ships being barred from entering major ports, and harbor workers, fearing radiation exposure, refused to unload cargo from the ship.
Follow along on an amazing day aboard the NS Savannah. Lounge on the deck with Mrs. Eisenhower or simply enjoy the many amenities that the ship has to offer.
While a technical success, Savannah’s design never became profitable and lasted just 5 years in commercial operation.
In 1971, the reactor was refueled and made inoperable.
Since the N.S. Savannah is historically significant, the ship was officially declared in 2001 a National Historic Landmark.

Otto Hahn carried cargo for 9 years, but it’s reactor was eventually removed and replaced with a conventional diesel engine.
Mutsu Never carried cargo, and after having traveled just 82 thousand kilometers, its reactor was also swapped for a Diesel engine.
Along with a handful of nuclear icebreakers, Russia still occasionally operates the only remaining nuclear cargo ship, mostly carrying military cargo in the far north of the country.

Today, more than 90,000 thousand merchant ships operate on the world’s oceans, and the majority burn low-grade bunker oil.
The most polluting oil available.
One large cargo ship can put out as much hazardous sulfur dioxide as fifty million cars.
And while the public remains focused on the potential dangers of nuclear power, shipping-related emissions have led to four hundred thousand premature deaths each year from lung cancer and cardiovascular disease.
If just a dozen large cargo ships were powered by nuclear reactors, the reduction in global emissions would be considerable.
And they would join the hundreds of nuclear-powered vessels that have been operated safely by the U.S. military over the past 50 years.
Today’s nuclear technology is safer and more economical than it was sixty years ago when Savannah first set sail.
But the development of nuclear-powered civilian ships remains frozen in time.
Because the biggest obstacles still remain, especially public perception.
Links :
Posted by geogarage at 1:53 AM