Antoine Albeau: the life and career of a windsurfing legend

ZephirProject : the limits of windfoil pushed by Antoine Albeau
From SurferToday

He is arguably one of the most successful competitive windsurfers on the planet.
Meet Antoine Albeau, the man who breathes trophies and records.
There is small yet prestigious room for sportspeople with over 20 world titles, and the most successful French sportsman in history has a seat in that reserved space.
He hates missing and losing races but is a huge fan of obstacles and beach starts in slalom windsurfing.

Antoine Albeau was born June 17, 1972, in La Rochelle, France.
His father opened École de Voile de La Couarde, a surfing and sailing school on the south coast of La Couarde-Sur-Mer in Île de Ré, where he learned to windsurf at the age of five.
Located off the west coast of France, Île de Ré is an island known for its stunning dunes, gorgeous beaches, imposing pine trees, exotic salt marshes, and checkered-like square waves.

By the time Antoine hit 11, he was already competing, and when he turned 19, guided by his father, he became a professional windsurfer.

Around 18 years old, Albeau actually sailed 315 times in a single year.
"My dad told me: 'OK. Now, you have to sail the maximum you can.' And so I was noting down every session of over half an hour," revealed Albeau.
"At the time, it was super hard because Windguru didn't exist, and no one was calling the weather forecast. So, you were going to the beach, and then you waited. It was way more difficult." 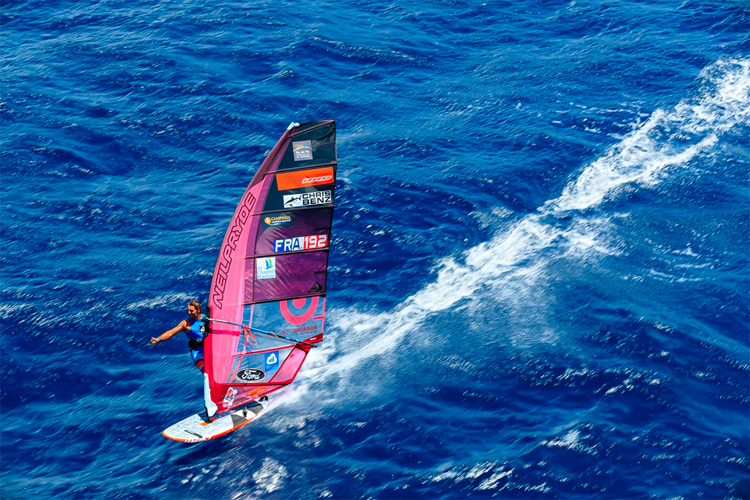 For the first time, Antoine met the sport's stars, and he was in awe - Anders Bringdal, Bjorn Dunkerbeck, Robby Naish, and others were sailing side-by-side with the rookie.
"I didn't start early enough, and I didn't get the experience and maturity needed, but I had very good boards, and my dad was getting the best fins," recalls Albeau.

In 2001, the French won his first world title - curiously, a PWA Freestyle World Tour title.
"I was really good in freestyle because I was good standing on the board, less heavy than now, and I knew how to play with the sail."
"I was also doing all the maneuvers on both tacks and getting a lot of points. I remember an amazing final with Matt Pritchard in Pozo."

The path to success was no less than glorious.
Albeau went on to conquer 25 world windsurfing titles across nearly all disciplines: slalom, super x, freestyle, speed, and foil.
In his home country, the French won ten national titles.

Albeau has always been a fierce competitor and, at the beginning of his sailing career, he believed he crossed the line.
"I remember that when I was winning, I was mean. A guy once told me one day I was aggressive to people," reveals Albeau.
"And I said to myself: 'It is true.' So, I think I changed the way I sailed and was more respectful to the other riders." 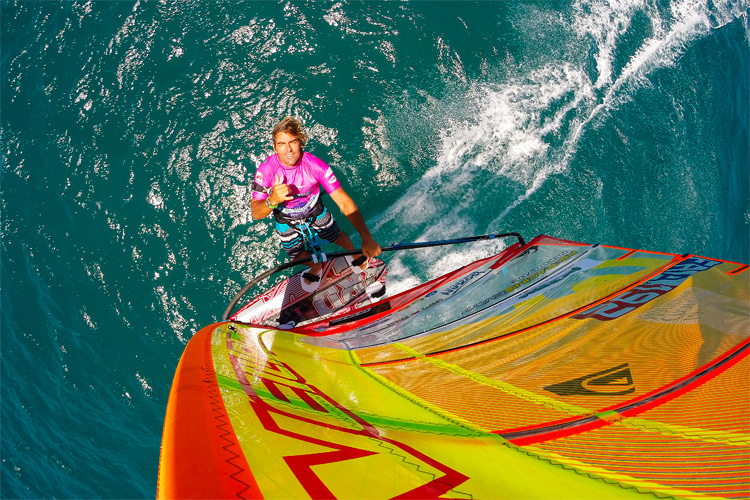 On October 20, 2008, Albeau and multiple-time British windsurfing champion Guy Cribb crossed the English Channel.
The sailboarding duo spent nearly six hours battling raging winds and stormy seas before completing the 70 nautical miles (130 kilometers) from Cherbourg (France) to Poole (England).Albeau and Cribb had to face 13-foot (four meters) waves and swells and dodged large chunks of wooden planks floating in the water.
Despite the cramps and exhaustion, the windsurfers were able to sail at speeds of up to 30 knots and raise funds for a children's charity.

In 2010, Antoine Albeau was nominated for Laureus World Action Sportsperson of the Year.

One windsurfer left his comfort zone and his sail to do the same on a surfboard because he never misses an opportunity to explore uncharted territories.
This time, he had to play the big wave game in home waters.
But Antoine was not new in Belharra.
He had been testing the French reef break, and he was more than prepared to ride it alongside the world's best big wave surfers.
Let's not forget that Albeau is a sports addict who excels in nearly all board sports, including stand-up paddleboarding, kiteboarding, and wakeboarding. 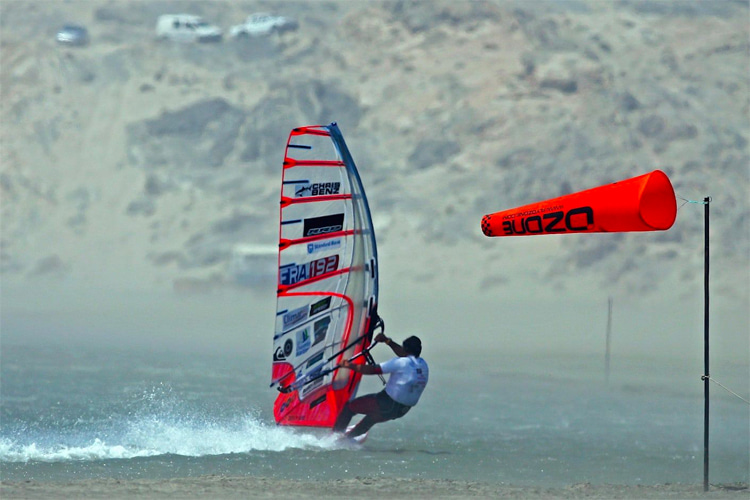 In only 48 hours, the champion windsurfer made 54 runs at the Luderitz Speed Challenge before setting a new mark later confirmed by the World Sailing Speed Record Council (WSSRC).
"I was like a machine. I remember Sophie from the organization asking me: 'Aren't you tired?' I end up going 15 times above 52 knots and nine above 53," recalls Albeau.
"I knew which fin, board, and sail I had to use. You could play a little bit with the stabilizing system, and I was confident with my gear."

In July 2020, Albeau broke windsurfing's nautical mile speed world record at Plage du Rouet in La Palme, France.
The French rode his windsurf board at 43.04 knots during the 2020 Prince of Speed, the speed sailing event organized by Principe Andrea Baldini.
At 48, he also broke the windfoil's nautical mile mark at 30.76 knots.

Simultaneously, Albeau announced he was working with Marc Amerigo to break the 500-meter speed sailing world record, currently in the hands of Paul Larsen and his Sailrocket 2 at 65.45 knots.
Is it possible? For sure - the goal is 66 knots.
"We have to understand that Sailrocket 2 is not that really powered by humans. There are cables and ropes. Kiters and windsurfers are different," explains Albeau.
"But we want to develop something that anyone can use at 40 knots - not just me." 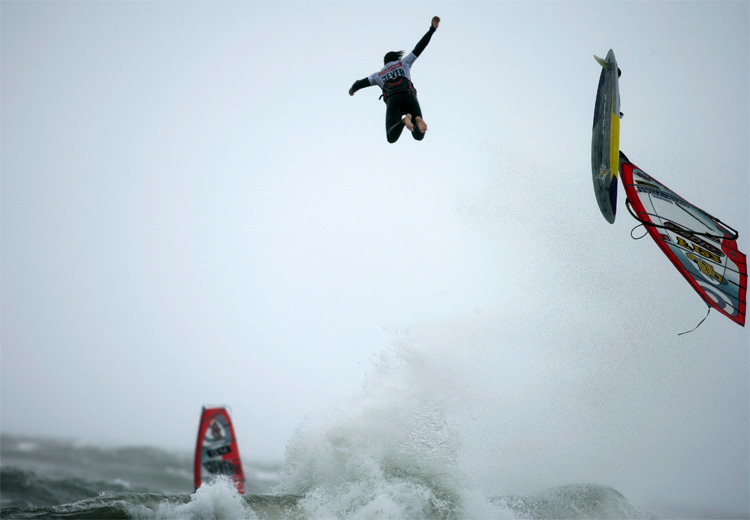 The French sailboarder is a three-time winner of Défi Wind (2005, 2006, and 2007), the long-distance windsurfing marathon that takes place in Gruissan, France.
Antoine Albeau's sail number is FRA-192.

He is the uncle of Julien Bouyer, a former two-time Techno 293 world windsurfing champion.
Antoine Albeau is married to Paola Green.
The couple has two sons: Alani and Adriel.

The windsurfer was awarded a medal by Académie des Sports in 2014 for his performances in 2013 and named Knight of the National Order of Merit in 2015.

Antoine Albeau's most popular nicknames are "Tonio," "T1000," "Tony Elbow," "A²," and "running elephant."
His net worth is approximately $1.5 million.
The man who dislikes wasting time on travel arrangements and anchovies has blue as his favorite color and Maui, New Caledonia, and Tahiti as his favorite windsurfing spots.