Simulation of temperature differences from normal centered over Antarctica
from the American (GFS) model.
(WeatherBell)
March 20
From WP by Jason Samenow and Kasha Patel
‘This event is completely unprecedented and upended our expectations about the Antarctic climate system,’ one expert said


The coldest location on the planet has experienced an episode of warm weather this week unlike any ever observed, with temperatures over the eastern Antarctic ice sheet soaring 50 to 90 degrees above normal.
The warmth has smashed records and shocked scientists.
“This event is completely unprecedented and upended our expectations about the Antarctic climate system,” said Jonathan Wille, a researcher studying polar meteorology at Université Grenoble Alpes in France, in an email.
“Antarctic climatology has been rewritten,” tweeted Stefano Di Battista, a researcher who has published studies on Antarctic temperatures. He added that such temperature anomalies would have been considered “impossible” and “unthinkable” before they actually occurred. 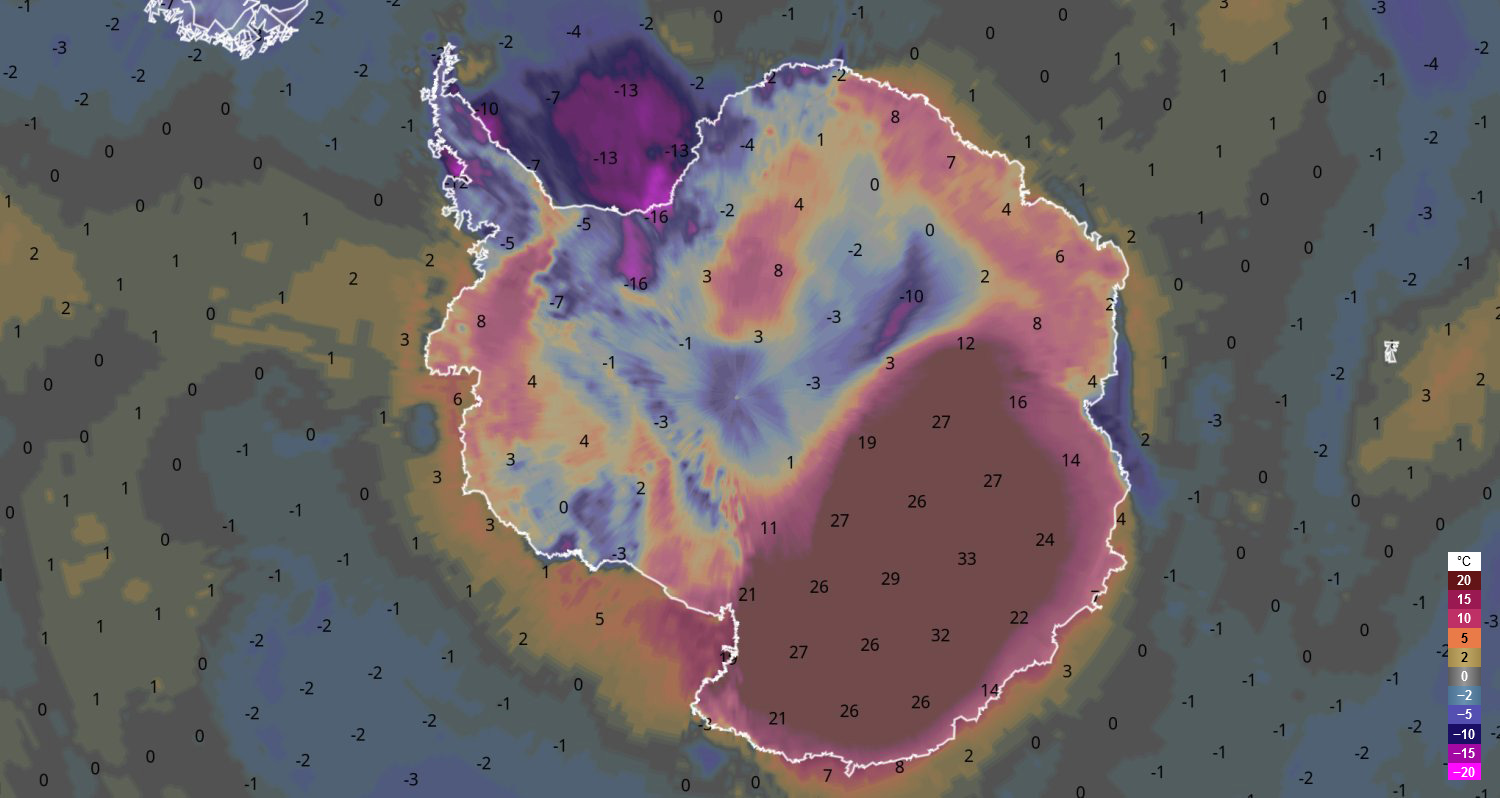 courtesy of Ventusky (18/03/2022)
Parts of eastern Antarctica have seen temperatures hover 70 degrees (40 Celsius) above normal for three days and counting, Wille said.
Helikened the event to the June heat wave in the Pacific Northwest, which scientists concluded would have been “virtually impossible” without human-caused climate change.

What is considered “warm” over the frozen, barren confines of eastern Antarctica is, of course, relative. Instead of temperatures being minus-50 or minus-60 degrees (minus-45 or minus-51 Celsius), they’ve been closer to zero or 10 degrees (minus-18 Celsius or minus-12 Celsius) — but that’s a massive heat wave by Antarctic standards.

The average high temperature in Vostok — at the center of the eastern ice sheet — is around minus-63 (minus-53 Celsius) in March. But on Friday, the temperature leaped to zero (minus-17.7 Celsius), the warmest it’s been there during March since record keeping began 65 years ago. It broke the previous monthly record by a staggering 27 degrees (15 Celsius).

“In about 65 record years in Vostok, between March and October, values ​​above -30°C were never observed,” wrote Di Battista in an email.

Vostok, a Russian meteorological observatory, is about 808 miles from the South Pole and sits 11,444 feet above sea level. It’s famous for holding the lowest temperature ever observed on Earth: minus-128.6 degrees (minus-89.2 Celsius), set on July 21, 1983.

Eastern Antarctica’s Concordia research station, operated by France and Italy and about 350 miles from Vostok, climbed to 10 degrees (minus-12.2 Celsius), its highest temperature on record for any month of the year. Average high temperatures in March are around minus-56 (minus-48.7 Celsius).

At a nearby weather station, the temperature reached 13.6 degrees (minus-10.2 Celsius) about 67 degrees (37 Celsius) above average, according to University of Wisconsin Antarctic researchers Linda Keller and Matt Lazzara.

Keller and Lazzara said in an email that such a high temperature is particularly noteworthy since March marks the beginning of autumn in Antarctica, rather than January, when there is more sunlight. At this time of year, Antarctica is losing about 25 minutes of sunlight each day.

Wille said the warm conditions over Antarctica were spurred by an extreme atmospheric river, or a narrow corridor of water vapor in the sky, on its east coast. According to computer models, the atmospheric river made landfall on Tuesday between the Dumont d’Urville and Casey Stations and dropped an intense amount of rainfall, potentially causing a significant melt event in the area.

And just to leave this satellite image from today of the atmospheric river spreading clouds over East Antarctica pic.twitter.com/OdAy1Li6sS

The moisture from the storm diffused and spread over the interior of the continent.
However, a strong blocking high pressure system or “heat dome,” moved in over east Antarctica, preventing the moisture from escaping.
The heat dome was exceptionally intense, five standard deviations above normal.

The excessive moisture from the atmospheric river was able to retain large amounts of heat, while the liquid-rich clouds radiated the heat down to the surface — known as downward long-wave radiation.

Wille explained warm air is often transported over the Antarctic interior this way but not to this extent or intensity.
“[T]his is not something we’ve seen before,” he said.
“This moisture is the reason why the temperatures have gotten just so high.”

Models show the atmospheric river will exit the continent around Saturday, but the moisture will take longer to dissipate.
Abnormally high temperatures in the region could last through the weekend. 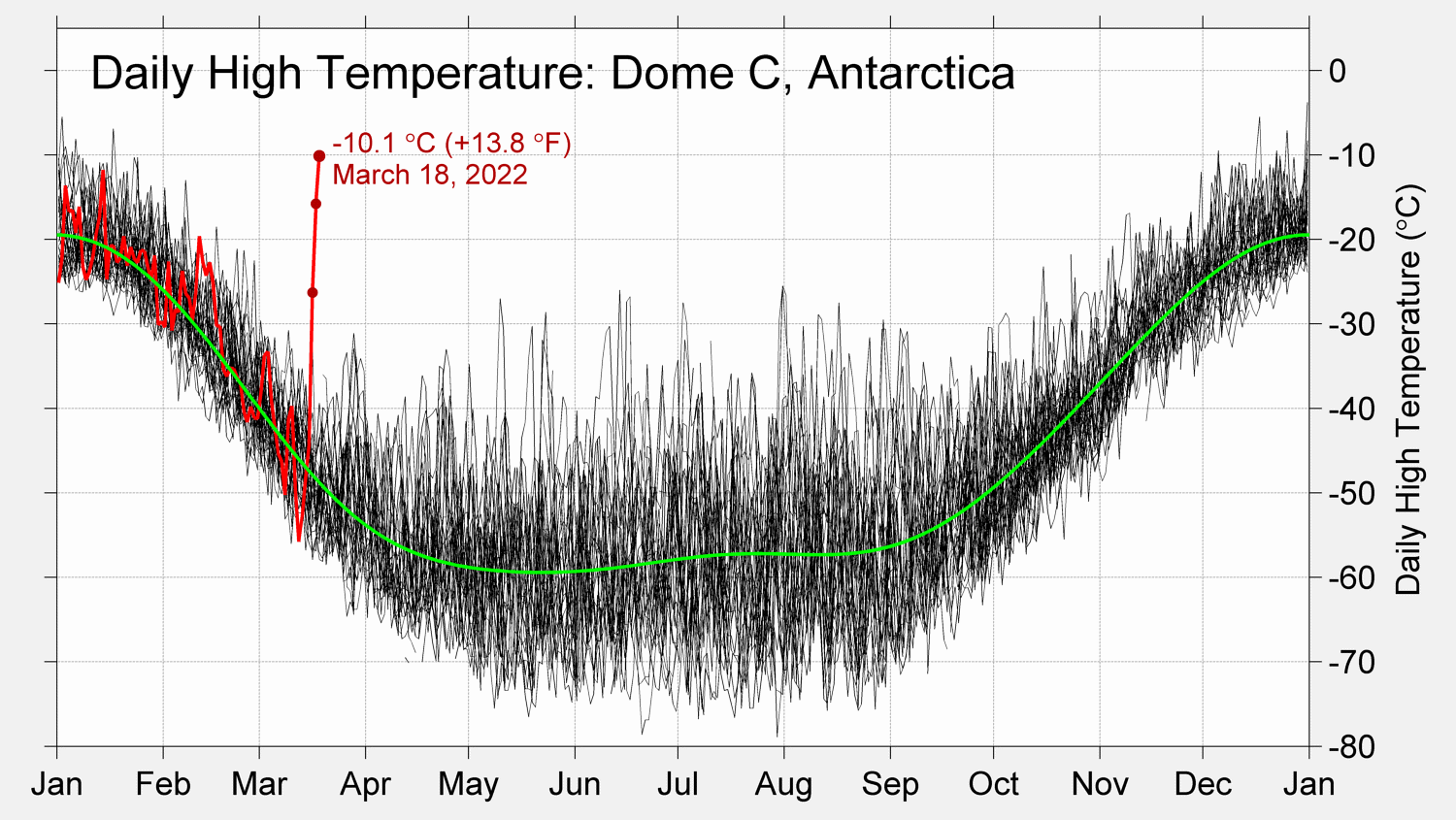 Heat wave in Antarctica, +38 °C (+68 °F) above normal.
That's not an error, or a typo.
The remote research station at Dome C recorded a temperature nearly 40 °C above normal for this time of year, beating the previous March record by a startling 20 °C.
see WMO
The abnormally high temperatures have caused some melting in the region according to models, which is unusual as this part of Antarctica doesn’t experience much melt often.
This one melt event won’t affect the stability of the glaciers in that area though.
“This event happened in a location that doesn’t often have melt. Obviously, this doesn’t mean that from now on we’re worried that melting will happen,” Wille said.
“It’s more of like, ‘Oh, that is weird, that could happen more in the future and then this could be bad.’”

Wille said it’s difficult to attribute this one event to climate change at the moment, but he does think rising temperatures helped prime conditions for such an event.
Climate change is “loading the dice” for more situations like this, he said.

Wille and his colleagues are studying how climate change will affect the circulation patterns around Antarctica and whether atmospheric rivers will become more common or more intense.

“We do believe they will become more intense because it just simple physics … but the details, we’re still trying to figure that out. It would be very difficult to say that there’s not a climate change fingerprint on an event like this,” he said.

Keller and Lazzara suggested more study is needed on the climate change connection.
“[W]e can’t tell whether this is going to be a new trend or is just an oddity that occurs occasionally on a most fascinating continent,” they wrote.

Temperatures are known to vary wildly over Antarctica, and massive swings are common.
Contrasting with this warm spell over eastern Antarctica, the South Pole observed just observed its coldest April to September period on record last year, with an average temperature of minus-78 degrees (minus-61 Celsius).

But shortly after that historic bout of cold, the sea ice extent surrounding the continent shrunk to its smallest extent just last month.

Amid all of the variability in Antarctica, fingerprints of human-caused climate change are still evident. Its western ice sheet is losing mass while western parts of the continent and the peninsula are among the fastest-warming regions on Earth.

Temperature differences from normal over the Arctic and Antarctic in recent days. (ClimateReanalyzer.org)
The historically high temperatures in Antarctica follow a pulse of exceptional warmth on the planet’s opposite end.
On Wednesday, temperatures near the North Pole catapulted 50 degrees above normal, close to the melting point.