An interactive map of Irish shipwrecks, littered with thousands of stories 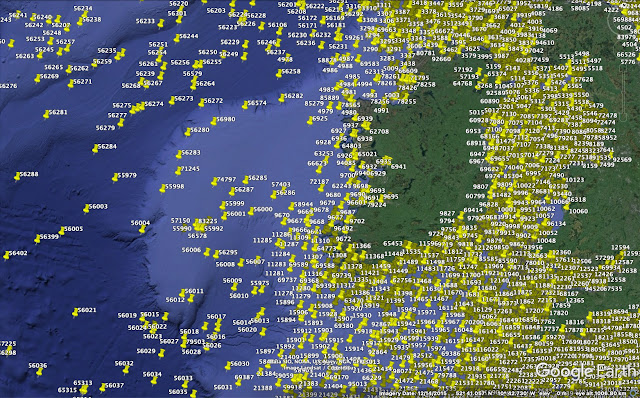 From Big Think by Frak Jacobs

We have a morbid curiosity about nautical disaster stories.
The Irish "Wreck Viewer" offers a window into centuries of marine misfortune. 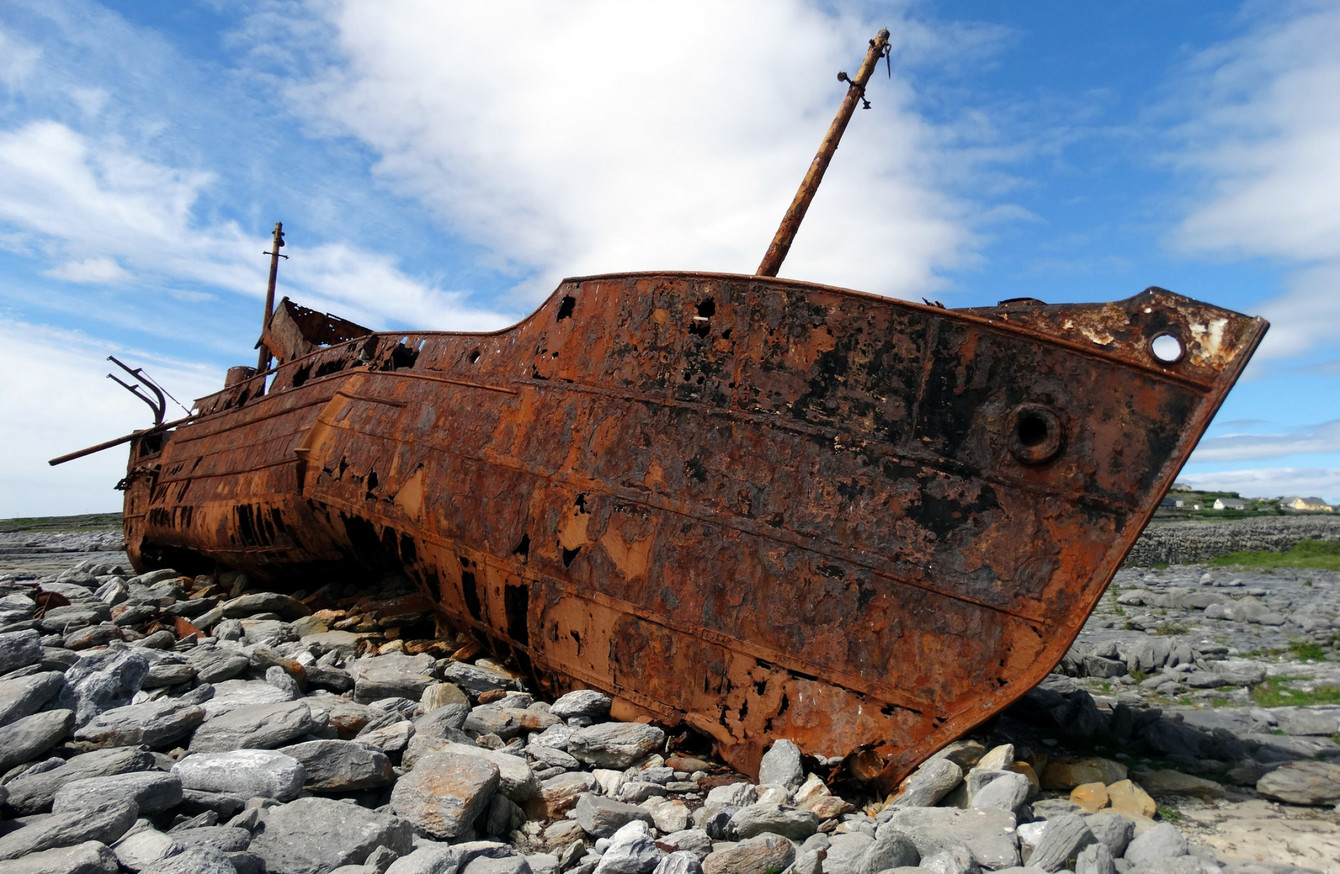 After more than a century in cold and dark Antarctic waters, a legendary ship was rediscovered last month. Ten thousand feet below the frozen surface of the Weddell Sea, an underwater drone lit up the wreck of the three-master that had brought Sir Ernest Shackleton to the South Pole.
Trapped and crushed

Shackleton had wanted his Imperial Trans-Antarctic Expedition (1914-17) to be the first to cross the icy continent over land. Instead, his ship got trapped and then crushed by pack ice.
The crew made its way across the ice to safety.
After many months of deprivation, they were rescued.

Because of their undaunted perseverance, Shackleton’s expedition is considered the last of the “heroic” explorations of the South Pole — a quality quite literally highlighted by the search team’s sub as it illuminated the ship’s name, still perfectly legible on its stern: ENDURANCE.

Shipwrecks are stories without happy endings.
They tell tales of suffering and loss.
They are memorials to the twin cruelties of nature and fate, even deadlier and more destructive when combined.
How could we not be fascinated by this nautical subgenre of the disaster story?
The question is rhetorical, unless you need reminding that Titanic was the first movie ever to gross more than $1 billion worldwide.
Three million shipwrecks
The seven seas are strewn with shipwrecks — some three million, according to one estimate, of which barely 1% have been explored.
Some of the more famous ones show up, rather disconcertingly, on in-flight maps (see Strange Maps #1115). HMS Tayleur, on its maiden voyage out of Liverpool to Australia, sank off Lambay Island in 1854. (Credit: National Monuments Service (Ireland), Wreck Viewer) 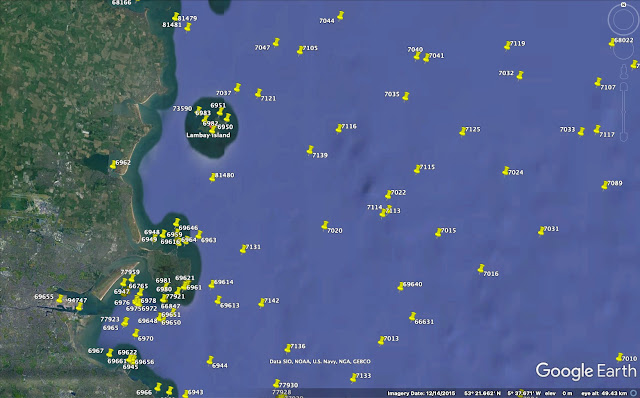 from UKHO wreck database
Ireland, however, has chosen a more comprehensive approach.
In April 2018, the country’s National Monuments Service (NMS) launched a Wreck Viewer: an interactive online map that provides information on thousands of vessels lost in Irish territorial waters, which cover 355,000 square miles (919,500 km2) of the North Atlantic.

In total, the NMS’s underwater archaeological unit has documented almost 18,000 wrecks — and not just ships, nor only at sea.
The entries include many “non-regular” vessels, such as 30 lifeboats, 192 submarines, and even 10 airplanes, as well as boats sunk in Ireland’s inland lakes and waterways, including an 11,000-year-old logboat, the oldest entry in the database.

Ireland’s shipwreck register spans the entire maritime history of Ireland, from the aforementioned prehistoric logboat and medieval trading vessels to warships, ocean liners, and even humble fishing boats, such as the one that went down in January 2017 — fortunately without loss of life.
Armada adventure ends in Ireland

Where possible, the Wreck Viewer gives information on ships’ names, date of loss, cargo, passengers, history, voyages, and location.
However, the location of almost 14,000 shipwrecks in the database is entirely unknown or cannot be fully confirmed.
So the map shows only about 4,500 of the shipwrecks in the NMS database whose precise location is known. 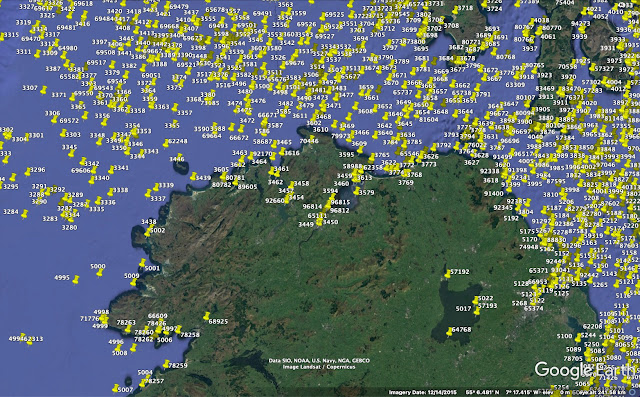 from UKHO wreck database
As the map shows, a remarkable portion of those wrecks is unknown — that is, the NMS knows of the wreck but knows little or nothing about it.

Among the oldest named wrecks logged in the database are six ships from the Spanish Armada, which in 1588 attempted to invade England.
The attempt failed, and the fleet was scattered all the way to Ireland, where several vessels sank.
These include La Trinidad Valencera (a requisitioned Venetian merchantman that was the fourth-largest ship in the Armada, sunk in Kinnego Bay, Donegal); La Juliana, Lavia, and Santa Maria de Vison (sunk near Streedagh in Sligo); the Santa Maria de la Rosa (sunk in Blasket Sound, Kerry); and the Girona (sunk off Antrim).

Another invasion force, this time destined for Ireland itself, arrived during the winter of 1796.
The French had sent a fleet of 48 ships, carrying 15,000 troops, to drive the British out of Ireland. The attempt came to nothing, mainly due to heavy weather.
Not a single Frenchman landed on Ireland, except as a prisoner of war.
One of the invasion ships, La Surveillante, was scuttled in Bantry Bay in January 1797. 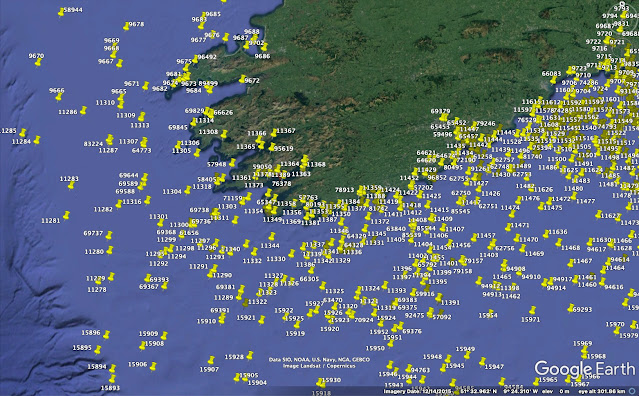 from UKHO wreck database
By volume — and undoubtedly by a few other measures too — World War I was the most eventful period in Irish marine history.
The Wreck Viewer lists over 1,000 ships lost off Ireland’s coasts between 1914 and 1918.
Just one example: On October 10, 1918, a German U-boat fired three torpedoes at RMS Leinster near the Kish light, just a few miles outside Dublin.
The ship sank with the loss of over 500 lives.
WWI would end just a few weeks later.

War is not a precondition for disaster, though.
On its maiden voyage from Liverpool to Australia in 1854, the RMS Tayleur sank in a storm off Lambay Island, with the loss of over 300 lives.
The ship was stocked with all the necessities for colonization, from ploughs and crockery to fire grates and headstones.
Not all shipwrecks stay shipwrecked

Not all shipwrecks stay that way.
The cargo ship Nellie M was blown up by the IRA off the coast of Moville in February 1981.
Don’t look for her on the seabed: she was raised, refurbished, and renamed — and resumed sailing. In 2000, she was acquired by a Columbian company.
She now trades in the Americas as the Dove.