Why do in-flight maps show shipwrecks? 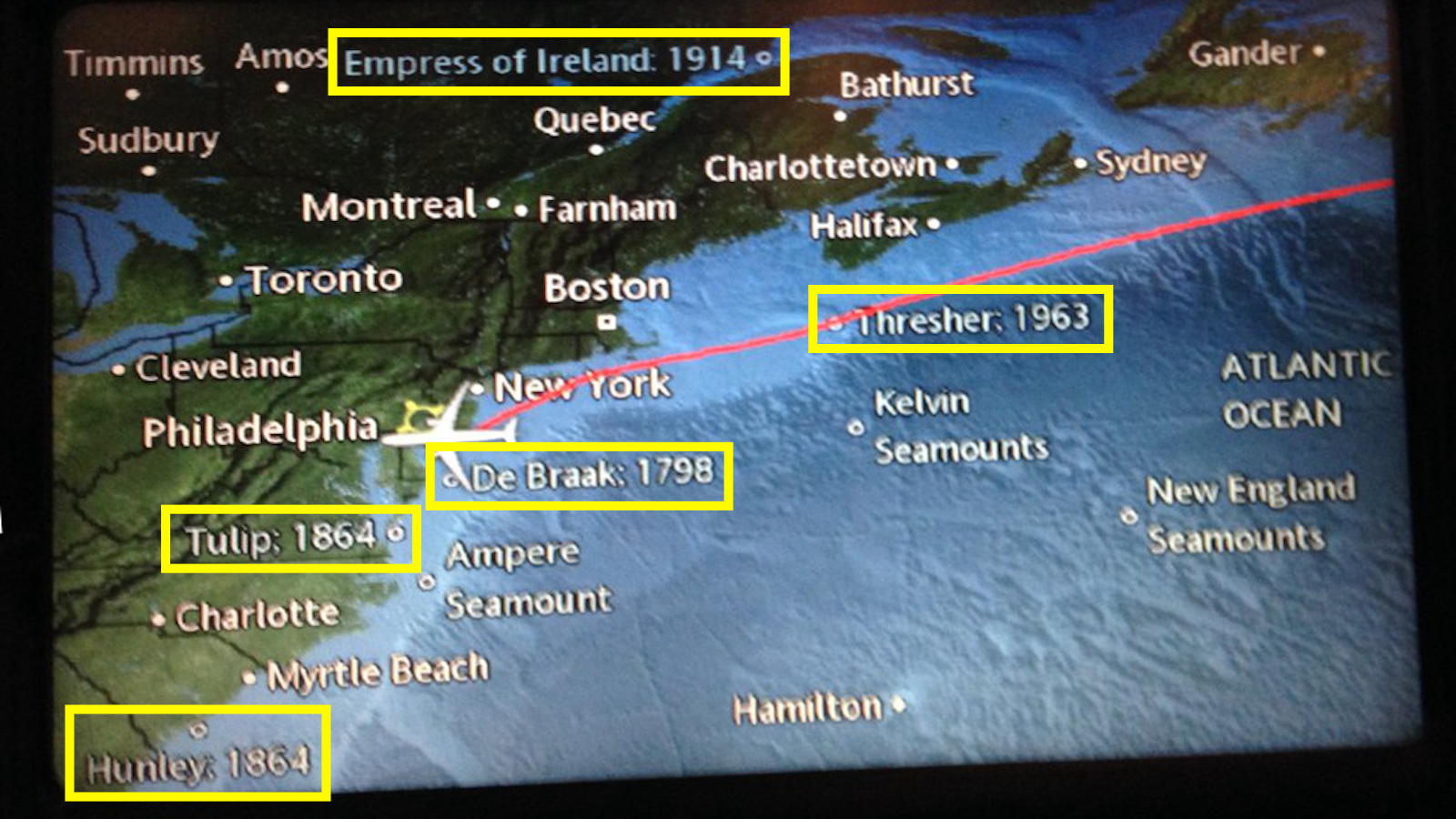 From Big Think by Frank Jacobs

On long-haul flights, some airlines show shipwrecks on their in-flight maps.
The aim is to entertain; the result is often to horrify.

As his flight approached Philadelphia International Airport one September day in 2018, American Airline passenger Thomas Weber noticed something strange about the live map of his journey, and he tweeted this about it: “Dear American Air, are you including shipwreck locations on your in-flight locations to make your customers feel more at ease about the safety of international travel?”

The airline hastened to reply: “We always want you to have a relaxing trip, but we appreciate your feedback. Many customers find the historical sites interesting.”

Mr Weber, who is a historian himself, agreed: “My tweet was (merely) meant as a tongue in cheek comment,” he said.
But the five shipwrecks on the picture he included in his original tweet do raise a pertinent question: why? 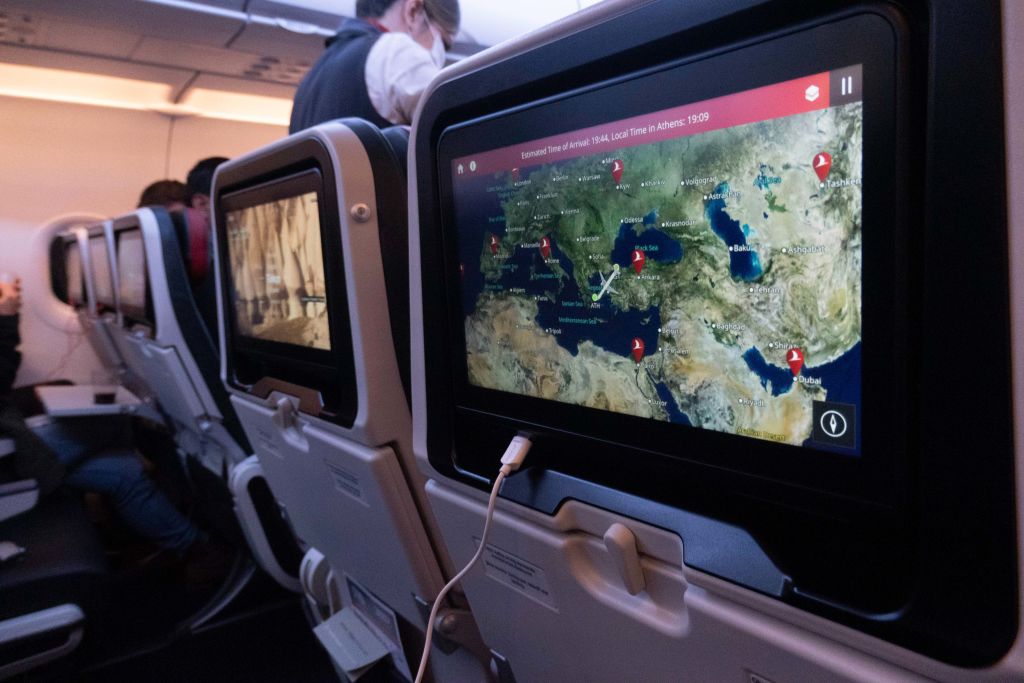 Seen all the movies, played all the games? Dynamic route maps offer another take on in-flight entertainment — especially if they include shipwreck locations.
(Credit: Nicolas Economou / NurPhoto via Getty Images)
Other air passengers too started tweeting pictures of in-flight maps showing the location (and sometimes also the date) of shipwrecks, some infamous enough to send a chill down anyone’s spine.

Like that dot halfway across the Atlantic, marked Titanic, 1912.
Or the RMS Lusitania, which someone saw popping up in the Atlantic just south of Ireland.
In 1915, a German U-boat sank that British ocean liner, killing almost 1,200 passengers and crew, including 128 Americans. The massacre was instrumental in turning U.S. public opinion in favor of the Allied cause in WWI.
All of which may be historically accurate and very educational, but it is also quite unnerving, remarked Wendy Fulton, as the flight tracker map on her Emirates flight pointed out the locations of the Thresherand Andrea Doria shipwrecks, among others.
“This is deeply weird (…) Who wants to think about deadly transportation disasters during a flight?” 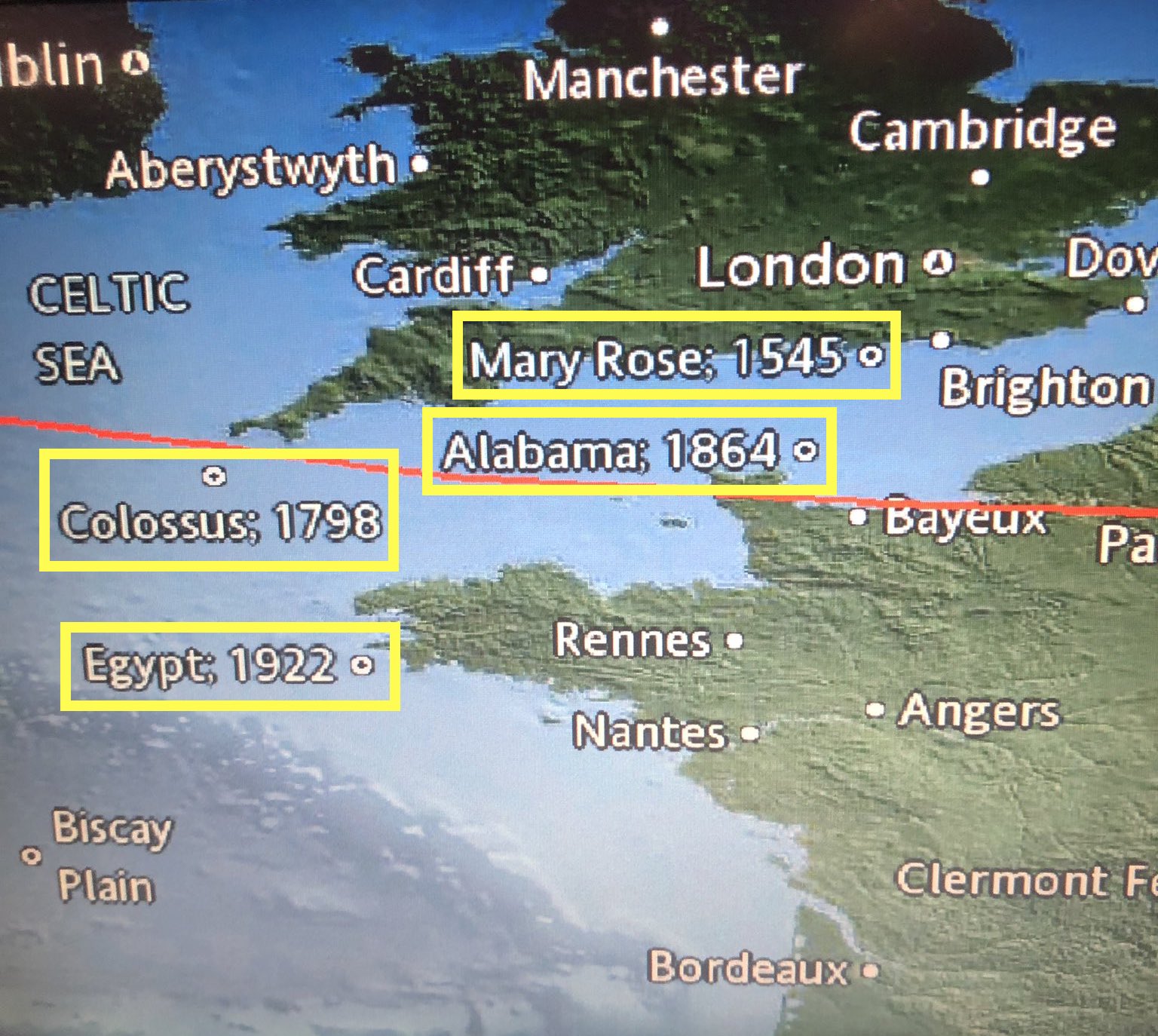 “This flight map shows the locations of famous shipwrecks in history and like… really not inspiring confidence here buddy.” (Credit: Laurel / Twitter)
Flying is safer than floating?

Soon after take-off, Florian Nicklaus, a passenger on a Swiss Air flight from JFK New York to Zürich, spotted the watery graves of the Thresherand the Titanic on his in-flight map.
“Pointing out these catastrophic events while being mid-air made me a bit uncomfortable. Or is this a way to reaffirm that flying is safer than crossing the Atlantic by ship?”

A map of shipwrecks as a not-so-subtle advertisement for the safety of air travel?
Sadly, we can’t test the obvious corollary of that theory.
If any of the old ocean liners were left today, would their on-board entertainment systems show dynamic maps that include the location of the world’s worst air disasters?

The shipwreck maps can be traced back to Collins Aerospace, one of the world’s largest suppliers of the aerospace and defense industries.
It supplies airlines with everything from airplane seats to biometric security systems, and it also produces Airshow, the software for those in-flight maps, including — if the airline wants — all those shipwrecks.

The reason, apparently, is an old and familiar one for cartographers: horror vacui.
On long, transatlantic flights, the vast emptiness of the ocean cries out to be filled with something, anything.
So instead of “Here be monsters,” they mention seamounts, ocean floor canyons, and other features of underwater geography.
Shipwrecks offer another means to keep in-flight map fans entertained and informed.

In a 2017 article in Condé Nast Traveller, a spokesman for Collins Aerospace (then still called Rockwell Collins) said the company is working to refine the information provided by Airshow, looking to add geological content and “moving away” from shipwrecks.
Wrong decision! The in-flight maps should go in the opposite direction and offer more information on the wrecks. Tragic histories, for sure; but they are great stories.
As proof, here are the nutshell histories of the five ships shown on Mr. Weber’s map. 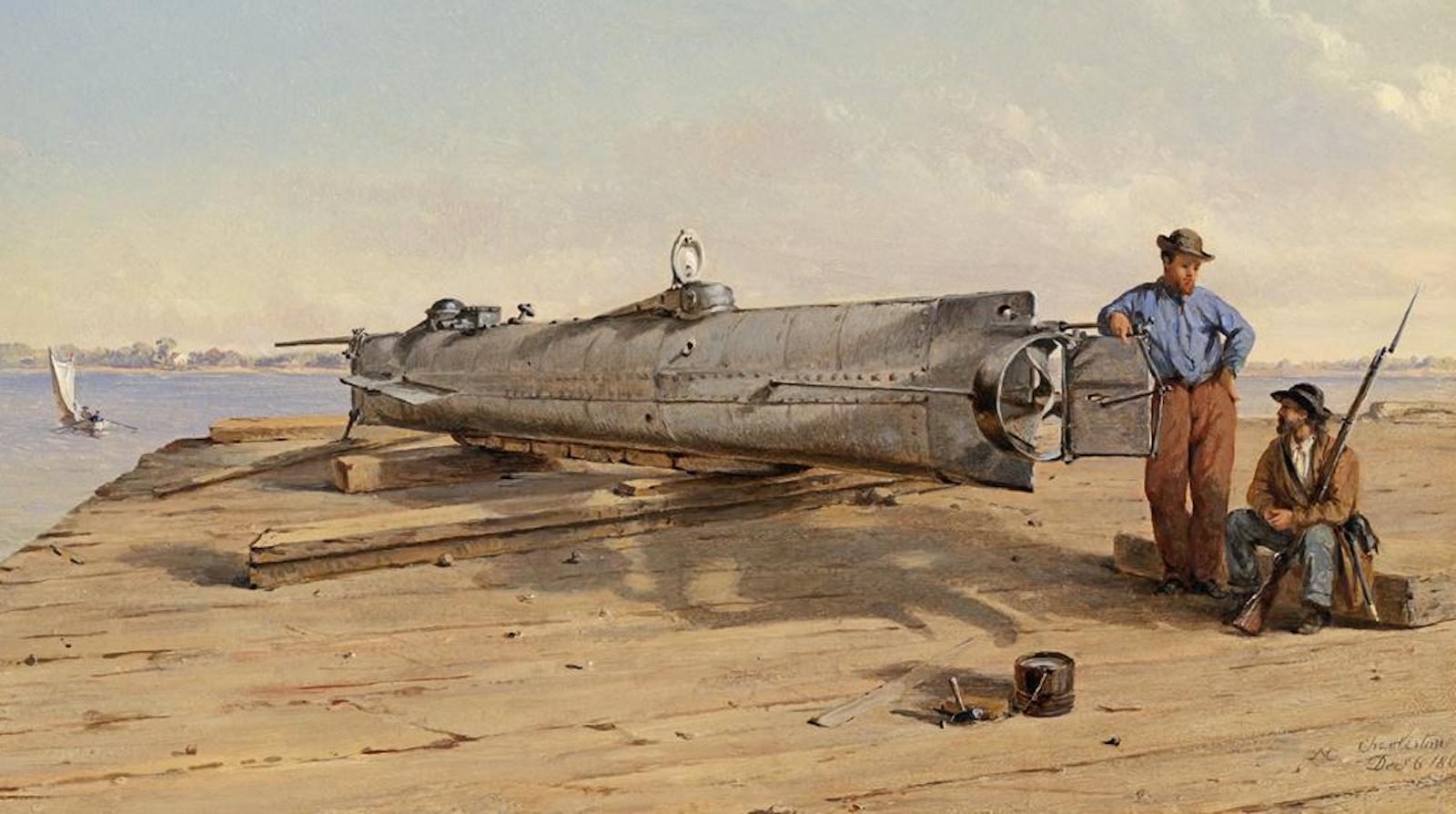 Built in Rotterdam in 1781, the Dutch cutter De Braak was seized by the Royal Navy when it sailed into the Cornish port of Falmouth, its crew unaware that the Netherlands had just become a client state of Napoleonic France.
During its short career in British service, it captured a Spanish vessel in the Atlantic, but it capsized and sank in Delaware Bay on May 25, 1798.
The inconsiderate salvaging efforts of this ship in the early 1980s contributed to the passage of the Abandoned Shipwrecks Act (1987) by the U.S. Congress, which laid down some rules for salvaging shipwrecks in American waters.
Hunley (1864)

The CSS H.L. Hunley was a Confederate submarine, at a time when they were new enough also to be known as “fish boats.
During its short career toward the end of the Civil War, the Hunley was sunk no less than three times, with a loss of 21 crewmen in total, including its inventor, Horace Lawson Hunley. In its last action before its final disappearance, it sank the USS Housatonic, then blockading Charleston harbor.
This is the first time ever that a warship was sunk by a submarine.
The wreck of the Hunley was located only in 1995 and was raised in 2000.
Tulip (1864)

Built in New York in 1862 for service in China, the Zheijang was sold to the U.S. Navy instead. Renamed Tulip and fitted with heavy guns, it served several purposes during the Civil War: helping to maintain the Union’s blockade of Confederate ports, protecting the maritime connections between Washington, DC and other Union ports, and participating in naval attacks on the South.
On November 11, 1864, its defective starboard boiler exploded, instantly killing 47 crew.
Two of the ten survivors later also died of their injuries.
Empress of Ireland (1914)

Having learned from the Titanic disaster two years previously, the RMS Empress of Ireland had plenty of lifeboats when it sailed from Québec City to Liverpool on May 28, 1914.
One day later, in thick fog near the mouth of the St. Lawrence, it collided with a Norwegian collier.
It sank in just 14 minutes, too fast for most of the nearly 1,500 passengers and crew to reach those lifeboats.
More than 1,000 people died. It remains Canada’s worst peacetime marine disaster.
Thresher (1963)

Designed to hunt and destroy enemy subs, the nuclear-powered USS Thresher was the fastest, quietest, and most advanced submarine of its time.
t sank on April 10, 1963 during training off Cape Cod, with the loss of all 129 crew and personnel aboard.
This is the second deadliest submarine disaster on record, after the sinking of the French sub Surcouf (killing 130 in 1942) but ahead of the Kursk disaster, which killed 119 Russian sailors in 2000.
Being lost at sea, the Thresher has not been decommissioned; it remains “on eternal patrol”.
Links :
Posted by geogarage at 1:24 AM