Don’t even try to read “Moby Dick” without this map

Had enough of 19th century whaling jargon?
This map might help you get through Moby Dick anyway.
(Credit: David Rumsey Map Collection)
From BigThink by Frank Jacobs 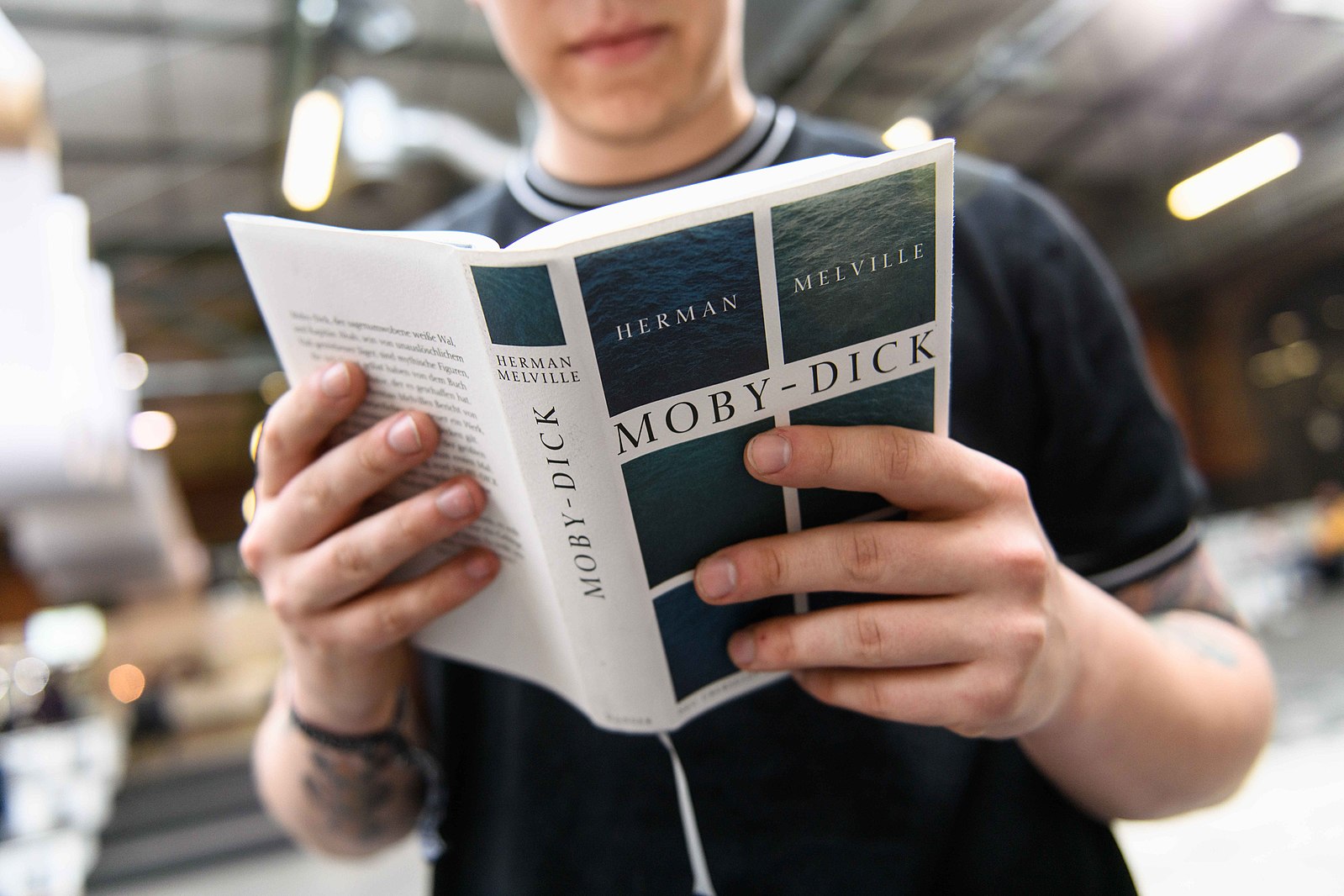 Count me out.
Moby Dick is not just a book about a whale; it’s also a whale of a book.
Its 600-odd pages, divided into 135 chapters, are stuffed with detail, description, and digression, overly familiarizing the reader with the dead craft of catching cetaceans using nothing more than 19th century technology.

Herman Melville published his masterpiece in 1851, when human attention spans were not yet decimated by digital devices and watching paint dry still counted as a competitive sport.
In the 21st century, we might not have anything better to do than to attempt, for the fourth time, to read what has often been called the Great American Novel.
But we do have countless other things to do.
But wait, this might help: a map! (A map always helps.) 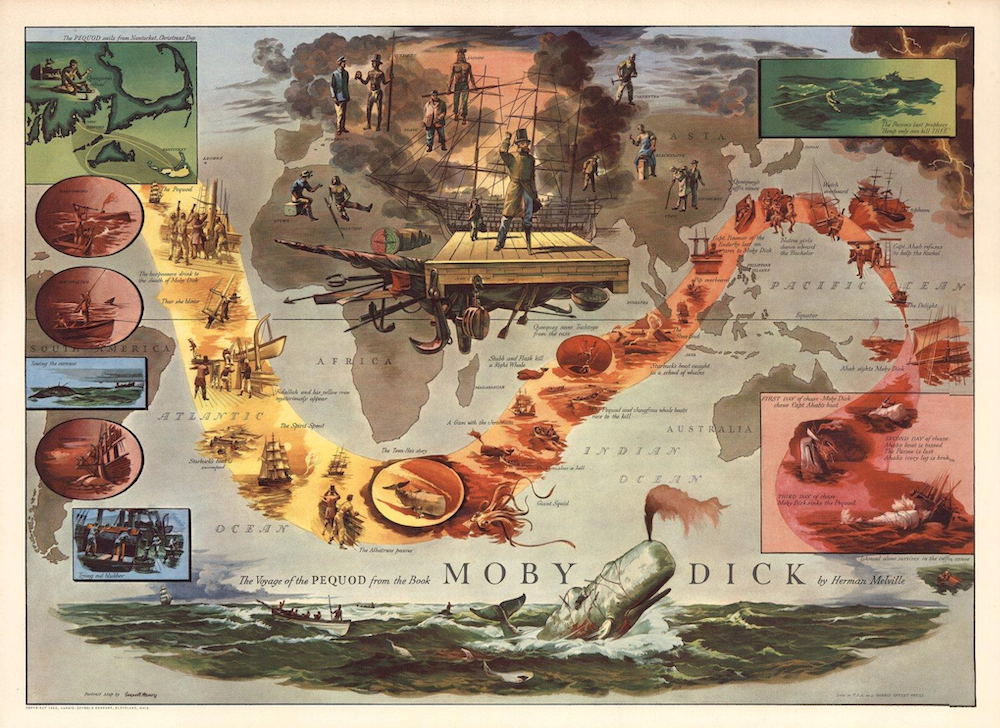 On our fifth attempt, we will keep this geographic guide close.
Not only does it show the course of the Pequod, piloted by Captain Ahab in pursuit of the great white whale he knows as Moby Dick, but it also sprinkles alluring nuggets of information along the way, possibly enticing us this time to read beyond Chapter 32 (a dreary exposé on cetology).
Hear ye, hear ye: spoiler ahead!

Somewhere in the North Atlantic, “the harpooners drink to the death of Moby Dick,” and just south of there, they get their first sight of the beast: “Thar she blows!” 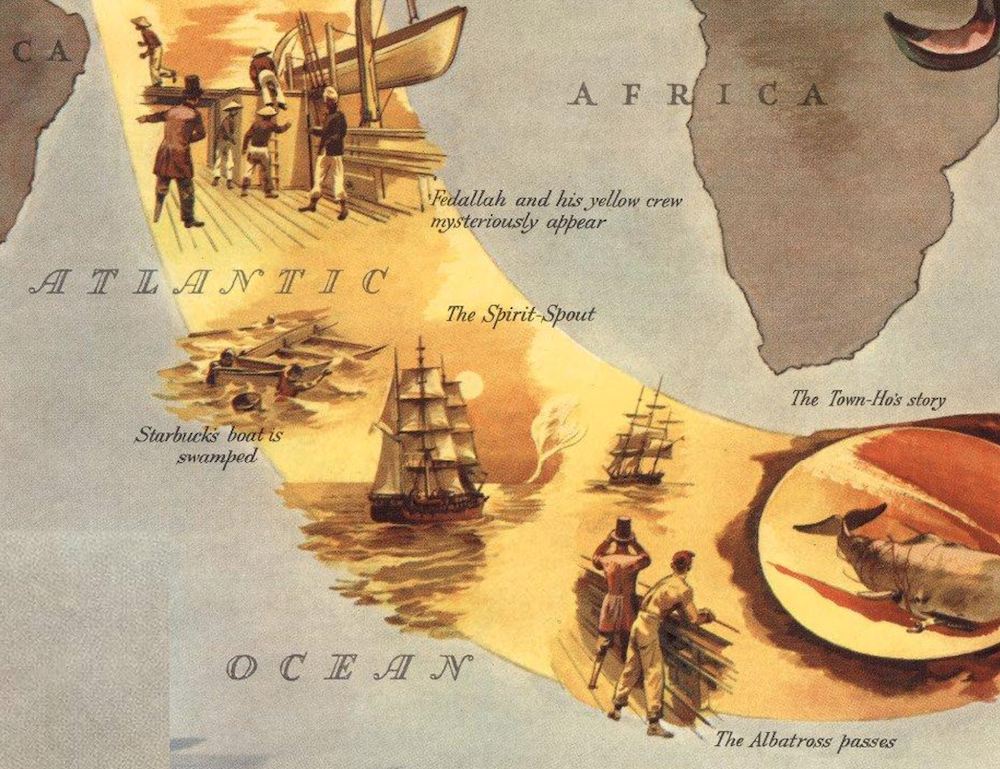 Mystery and superstition in the South Atlantic.
(Credit: David Rumsey Map Collection)
Things take a few unexpected turns in the South Atlantic: “Fedallah and his yellow crew mysteriously appear” and “Starbuck’s boat is swamped.” There are also two fateful sightings: a spirit-spout and an albatross.
If you’re a superstitious sailor — and who wouldn’t be, floating in a wooden box that far from home — neither is good news.
Near Cape Town, somebody tells “The Town-Ho’s story.”
This is further than I ever got.
Is this the book’s R-rated bit? 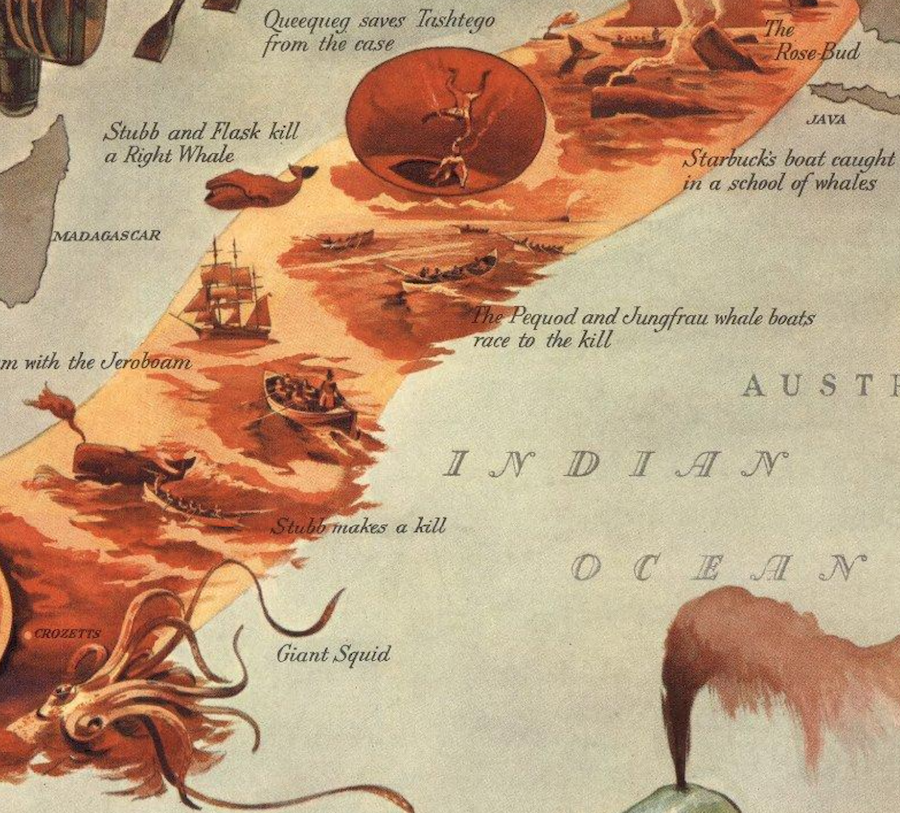 Racing the Jungfrau across the Indian Ocean.
(Credit: David Rumsey Map Collection)
Never mind!
As we turn into the Indian Ocean, there’s a giant squid!
And Stubb makes a kill!
And then another one! Meanwhile, somebody has a “Gam with the Jeroboam.” (A what with the what now?)

A bit higher on the intelligibility scale (and a bit further along the ocean), “The Pequod and Jungfrau whale boats race to the kill.” Americans fighting Germans?
Don’t mess this up, Melville! Starbuck (indeed he of subsequent coffeehouse fame) later gets his boat caught in a school of whales, and when entering the Indonesian archipelago, the Pequod meets the Rose-Bud.
Hey, wrong masterpiece! 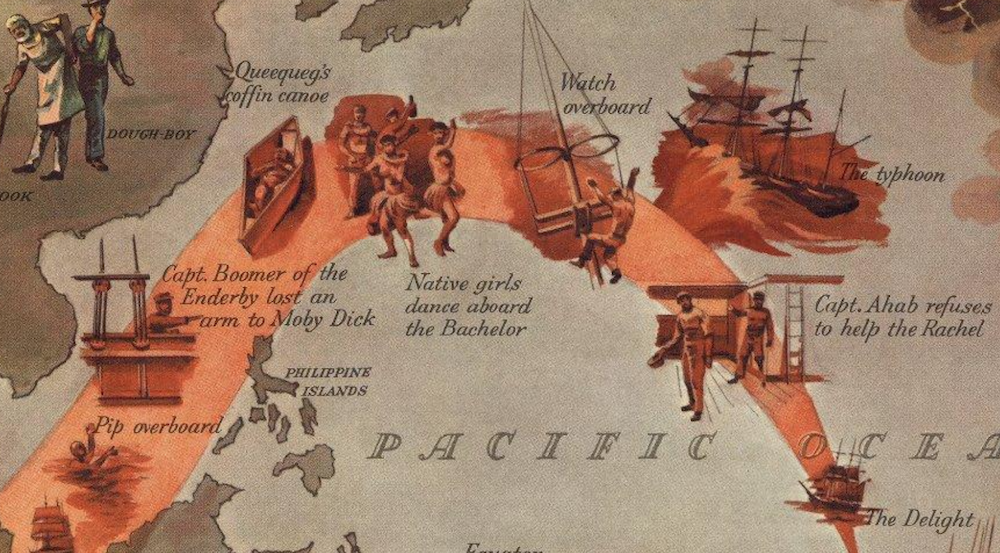 Misfortune multiplies as the Pequod enters the Pacific: Pip goes overboard, and so does a watchman.
There is an encounter with Capt.
Boomer of the Enderby, who “lost an arm to Moby Dick.” (Perhaps in a high-stakes poker game? Only one way to find out.) Queequeg ominously floats away in a “coffin canoe.” Fortunately, “Native girls danc(ing) aboard the Bachelor” (!) offer some light relief.

Things come to a head in the South Pacific: “Ahab refuses to help the Rachel” and “sights Moby Dick,” two events punctuated by a meeting with the incongruously named Delight.

The map ends as it started: with an inset.
Placed on the opposite, bottom-right side, it shows the dramatic three-day chase that closes the book.

On the first day, “Moby Dick chews Capt.
Ahab’s boat.” Score one for the whale.
On the second day, “Ahab’s boat is tossed.
The Parsee is lost.
Ahab’s ivory leg is broken.” Whale 2, Ahab 0.
On the third day, “Moby Dick sinks the Pequod,” and “Ishmael alone survives in the coffin canoe.” We have a winner!

Now, where is that map for Huckleberry Finn? Oh, here! 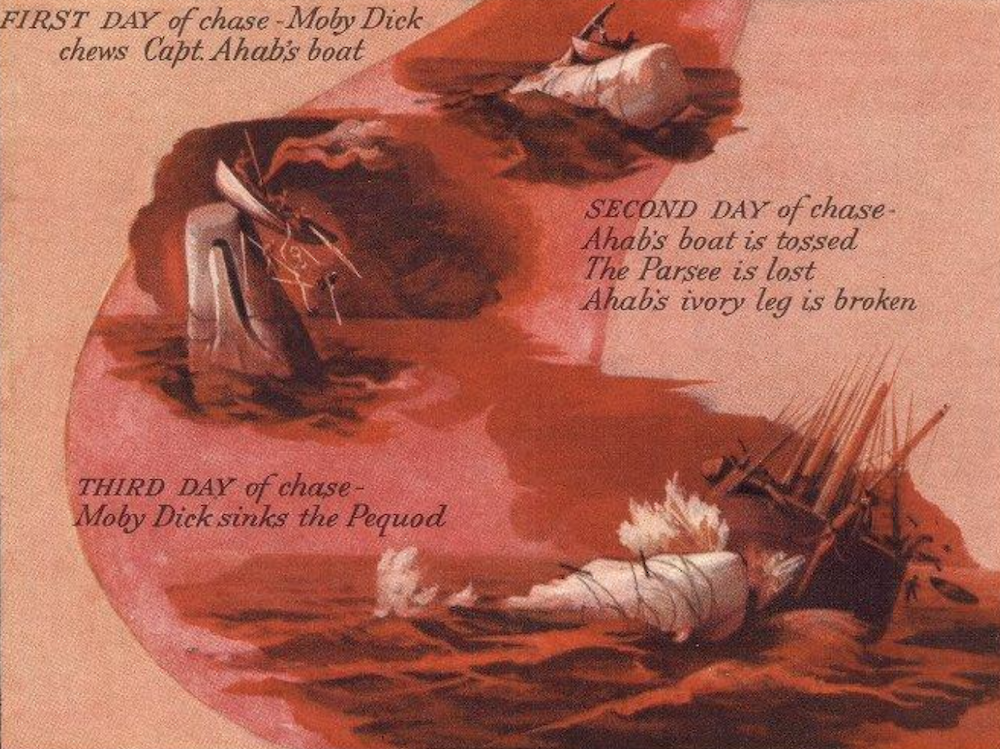 Spoiler alert: if it has fins, it wins.
(Credit: David Rumsey Map Collection)

This pictorial map titled “The Voyage of the Pequod from the Book Moby Dick by Herman Melville” was produced in 1956 by Edward E. Henry for the Harris-Seybold Company in Cleveland, Ohio.
It can be found here at the David Rumsey Map Collection.

If audiobooks are more your thing, you might enjoy The Moby Dick Big Read, a chapter by chapter reading of Moby Dick by a wide range of celebrities major and minor, including Tilda Swinton, Sir David Attenborough, John Waters, Rick Stein, China Miéville, Benedict Cumberbatch, Will Self, David Cameron, and Stephen Fry.