Would you take a nuclear-powered shower? Russia is now heating homes with a 'floating Chernobyl' power plant as part of an experiment to minimise climate change (but at least it doesn't involve a heat pump!) 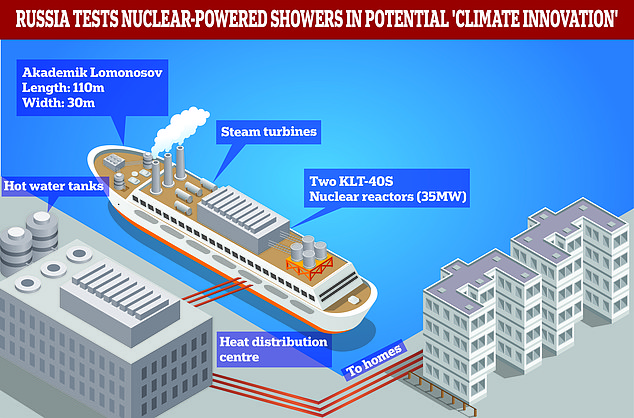 Nuclear residential heating has been introduced in the Arctic port community of Pevek, using energy generated on a nearby barge in the Arctic Ocean – previously dubbed Russia's 'floating Chernobyl' by Greenpeace.

Developed by Russian state nuclear company Rosatom, it makes use of heat that's vented as steam through the cooling towers of the barge's nuclear fission plants, which would otherwise be wasted.

Some experts believe the concept could help minimise climate change by reducing the use of greenhouse gas-emitting options like coal and gas, and firms in the US, China and France are now considering building similar reactors.

However, Pevek residents cannot opt out of getting nuclear-powered heat, even if they have safety concerns.
One resident, when asked about the risk of a radiation leak or explosion, said 'we try not to think about it'.

Another resident said he had been showering and bathing his three children in nuclear-warmed water.

Nuclear is one option being considered by Britain's Prime Minister Boris Johnson as part of his government's Net Zero drive, which will see gas boilers in new homes banned from 2025. 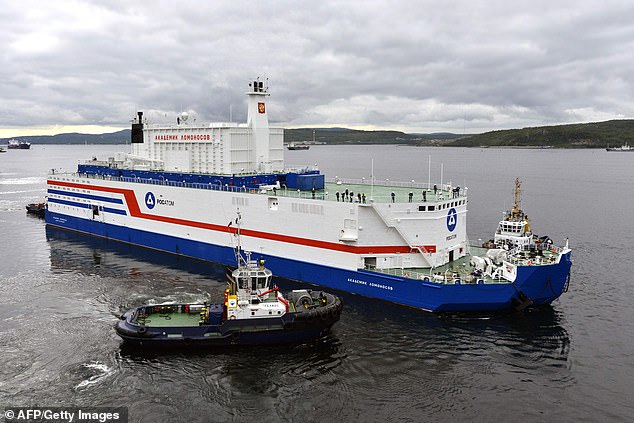 By 2050, all UK households should be using a low-carbon alternative – meaning that heat pumps, whether air or ground-sourced, are likely to be the common alternative.
Ground source heat pumps use pipes buried in the garden to extract heat from the ground, which can then heat radiators, warm air heating systems and hot water.

But right now, the cost of installing them can range from £14,000 to £19,000, and running costs depend on the size of the home and its insulation.
Nuclear fission, however, involves a heavy nucleus splitting spontaneously or on impact with another particle, resulting in the release of energy.

As well as homes in Pevek, the town’s community steam bath will also be nuclear-powered.
It could even be used to warm greenhouses or provide heat for industrial purposes, too.

'Decarbonising the electrical grid will only get you one quarter of the way,' he said.
'The rest comes from all these other things.
'Obviously this is not going to work if people don’t feel comfortable with the technology.'
Some figures are concerned of the potential risks of using nuclear power to heat water for public consumption.

'It is nuclear technology, and the starting point needs to be that it is dangerous,' Andrei Zolotkov, a researcher at Norwegian environmental group Bellona.
'That is the only way to think about it.'
Pevek residents have mostly welcomed the new plant, according to the New York Times – which is fortunate seeing as they can't opt out of its heated water.

Maksim Zhurbin, Pevek's deputy mayor, said none of the town's residents complained at public hearings before the barge arrived.
'We explained to the population what would happen, and there were no objections,' he said.

Russia is pushing the environmental benefits of the system, despite the fact it's one the world's heaviest polluters. 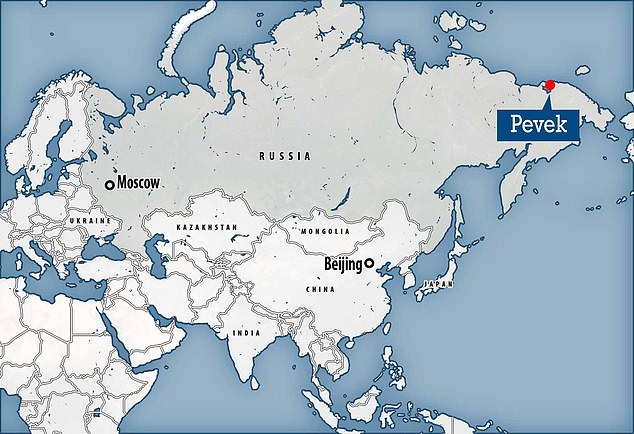 Nuclear residential heating has been introduced in the remote Siberian town of Pevek, using power from a nearby barge floating in the Arctic Ocean
The United Nations Climate Change Conference COP26 summit is currently taking place in Glasgow, but Russian President Vladimir Putin hasn’t attended in person.

Rosatom started to connect power from the floating power plant to Pevek heating pipes in June 2020.

The 472-foot vessel that carries two 35-megawatt nuclear reactors arrived at its permanent location in September 2019 after a perilous sea voyage of almost 3,000 miles.
The plant's two nuclear reactors are cooled by a series of water loops.
This is the start of the process of making use of waste heat.

Pavel Rozhkov, the Pevek resident using nuclear-powered water for baths and showers for his family – including his three children – said he's 'personally not worried'.
He and his wife can see the floating power plant about a mile away from his kitchen window.
'There are things we cannot control,' Rozhkov told New York Times.
'I can only pray for our safety, for the safety of our town.
I say, "God, it is in your hands."' 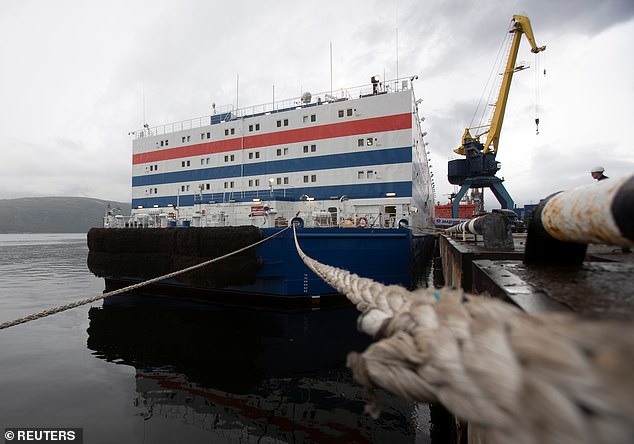 Named the Akademik Lomonosov, the 472ft vessel carries two 35-megawatt nuclear reactors, and had been under construction since 2006 before it reached Pevek in 2019
Nuclear reactors split atoms of uranium.
Energy released from the atoms is used to boil water.
A reactor core contains the uranium pellets and a 1000 megawatts (MWe) facility would have about 75 tonnes of enriched uranium.
Uranium-235 is bombarded with neutrons to split the atom, which then creates different elements or another isotope of Uranium.
Either way, it releases energy.
These often also undergo radioactive decay and a chain reaction is triggered contributing to the net energy output.
Steam is produced, condensed and then recycled so the only waste products are often the radioactive compounds created from the fission.
Control rods can be added or removed from the reactor core to increase or decrease the rate of reaction.
These are made of stable elements such as boron, silver, indium and cadmium that are capable of absorbing many neutrons without undergoing fission.
Luckily, Akademik Lomonosov has been designed with a number of safety features to prevent a nuclear disaster.
For one it can withstand a crash by a small aircraft.
Also, the vessel that holds the plant doubles as a containment structure.
Differences in pressure between the water circulating through buildings and the cooling loops also prevent radiation from spreading through the town.

Technicians loading the first reactor aboard the Akademik Lomonosov, Russia's floating nuclear power plant.
Credit: Rosenergoatom
Although nuclear energy is considered clean energy its inclusion in the renewable energy list is a subject of major debate.
Nuclear energy itself is a renewable energy source, but the material used in nuclear power plants – uranium – is a non-renewable.