The Viking longship: an engineering marvel of the ancient world 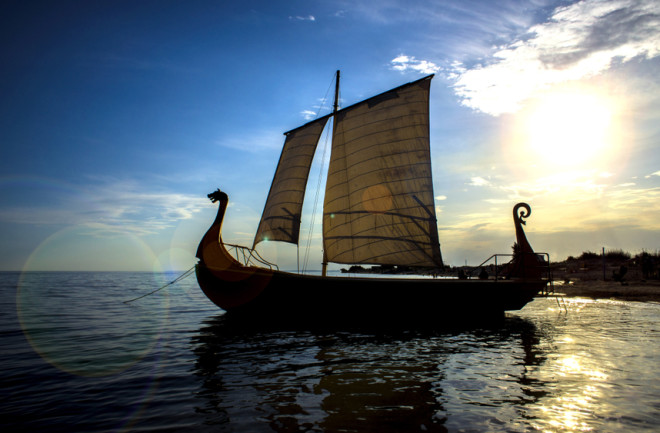 (Credit: Aerophoto/Shutterstock)
From Discover Mag by Joshua Rapp Learn
The favored war ships of Norsemen were fast and adaptable to various conditions.

Even today a Viking longship is the kind of image that arouses fear and respect.
In the front you’re faced with the high bows carved into the image of a dragon or other creature, while the sides reveal a row of round shields that don’t exactly foretell peaceful maritime exchange.

During the Viking Age of Scandinavia, which lasted roughly from the end of the 8th century to the middle of the 11th century, Norsemen and Norsewomen used these agile ships to expand from icy lands, islands and fjords they called home in northern Europe to travel and raid as far as Newfoundland to the West, Russia to the east and the Mediterranean Sea in the south.
Many Vikings even conquered kingdoms in the British Isles and mainland Europe, marrying into the local populations to create a mixed heritage that remains today in places like Normandy, England and Scotland.

But why were these boats so successful? Through a combination of speed, durability and adaptability to a range of conditions, says one expert.

“These raids they conducted were something that was extraordinary at the time, at least at the beginning of the Viking Age,” says Morten Ravn, a research coordinator and curator at the Viking Ship Museum in Denmark and also a Viking in training.
The Beginning of an Era
Before they were Vikings, Scandinavians have always relied largely on the sea that surrounds the Scandinavian countries.
Many of these older boats were much smaller than the famed longships.
Ravn says that the Norse would have used smaller boats built from planks of wood and dugout canoes built by felling thick trees and hollowing out their trunks.
These vessels were largely propelled by rowing, according to archaeological evidence.
While northern Europeans certainly had some contact with Roman provinces about 2,000 years ago and likely had some knowledge of sail technology, archaeologists have never found any evidence either in ship finds or depictions that Scandinavians began to use sails themselves until the 7th or 8th centuries. 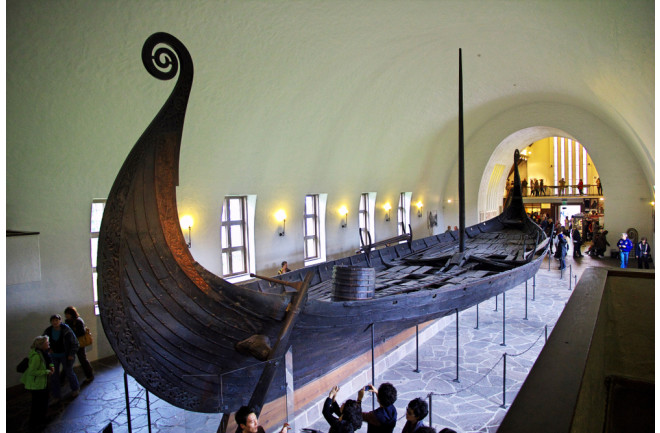 (Credit: Sergey-73/Shutterstock)
“It might just be that we simply haven’t found the ship finds where we would see this technology being used,” Ravn says.
But this timeline roughly makes sense when understanding why Scandinavian people began to expand outwards on longer sea voyages and raids about 1,200 years ago.

But by the time they began to use the sail, Scandinavians would certainly have been well versed in carpentry since most of their houses and settlements were built of wood.
“They would definitely already have excellent skills in selecting proper woods and using these resources in different construction projects,” Ravn says.
The combination of their knowledge of boatbuilding with sailing technology likely led to the construction of the first longships. 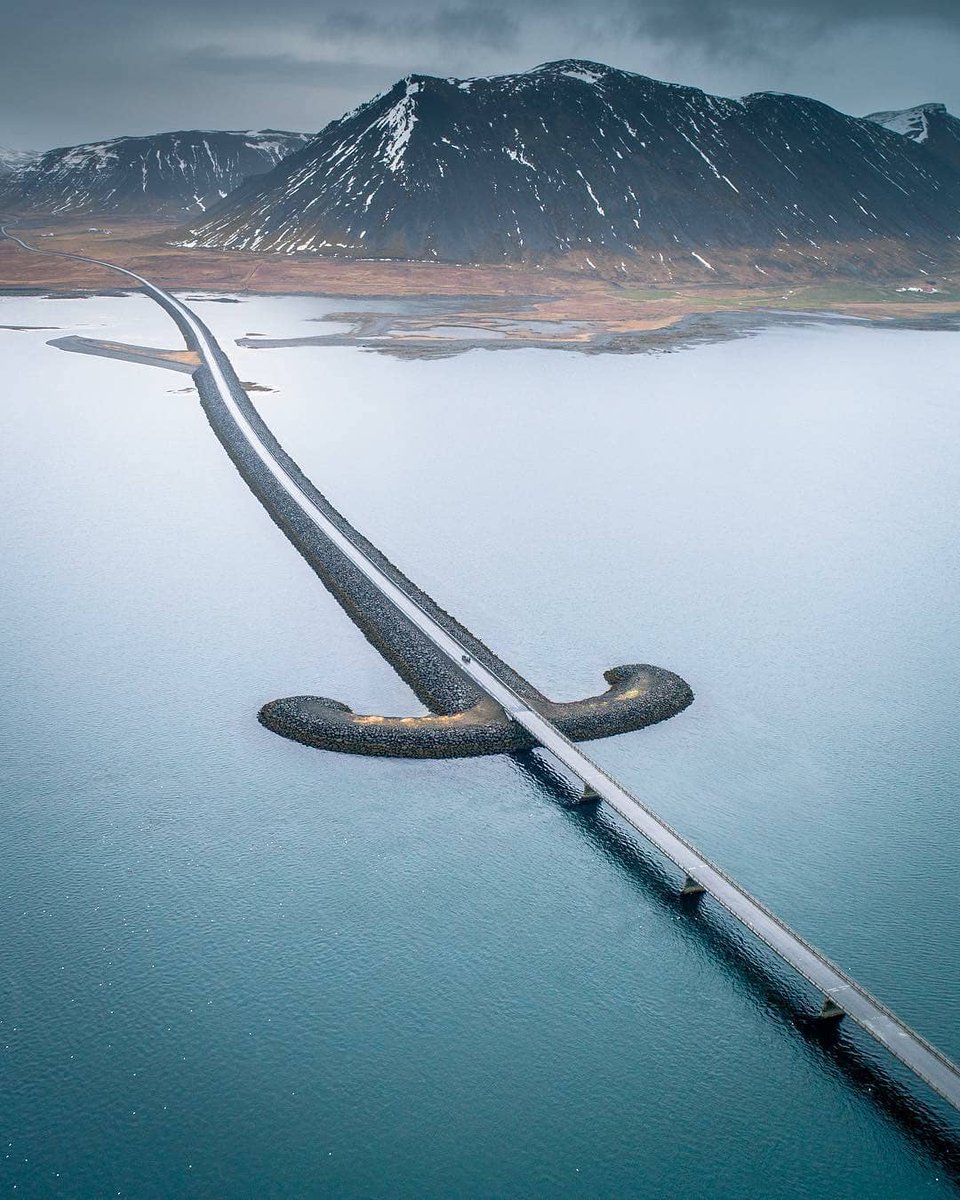 In Iceland there is a bridge in the shape of a sword, as a nod to the country's Viking past
Navigating the Sea

Researchers still debate about how Vikings managed to navigate the open sea on voyages that carried them to lands as far as Iceland, Greenland and even eastern Canada.
On the TV show Vikings, main character Ragnar Lothbrok is shown using a type of compass in a bucket together with a special sun stone that reveals the solar position during cloudy days.
Unfortunately, there is little archaeological evidence to indicate Vikings made use of such technologies, Ravn says — but he believes they wouldn’t have necessarily needed it in most cases anyway.

Ravn says the Vikings also may have made some use of the stars and sun for navigation.
Signs like birds could tell sailors that land was nearby while the behavior of fish or marine mammals could give clues as well, he says.
Wave patterns might reveal distant beaches or cliffs and seasoned mariners could likely even sense the difference in smell before they ever set their eyes on solid ground.
Except for exceptions like traveling to Iceland or Newfoundland, Ravn says that Viking ships largely hugged the coastlines in their travels.
Hit and Run

Many scholars mark the beginning of the Viking age at 793 with a violent raid on a Christian monastery at Lindisfarne, an island off the coast of Northumberland.
Right from the beginning, longships would have been particularly well suited to maneuvers like this.

The ships were likely built with a psychological component in mind.
The shields were likely put on the side partly due to the relatively small space for crew, but they also create a menacing appearance.
Ravn says the sails and hulls were often colorful, and powerful and frightening symbols like dragons were carved on the stems of the prows.
“Having these ships symbolizing power and splendor was very important for the Vikings,” he says.
“Seeing a fleet of these ships arrive, you would also be fairly intimidated.”

Sails would have allowed these ships great speed when the wind was favorable.
But the vessels were also equipped with rows of benches and oars so that the crew could still beat a fast approach or retreat on calm days.

Ravn says that the two strategies for moving these boats would have helped Vikings conduct quick, precision landings on beaches.
He speaks from personal experience as a Viking in training — the Viking Ship Museum where he works has reconstructed several Viking longships using traditional methods in an effort to understand more about the building technique.
They have taken them to the seas, and experiments the museum conducted showed that by the time the ships were first spotted on the sea to the time the first wave of warriors landed on the beach would only take an hour.

The hulls of the ships also sat very high on the water — the boats only dipped less than a meter below the water line.
This would have allowed longships to get into very shallow water without slowing down, allowing for quick troop deposits and effective amphibious assaults.
Ravn says that ships could even be brought together side by side, or using planks, to act as bridges to give warriors faster access to the shore.

Small raids would pick up over the next century until the time in which Viking armies were conquering European kingdoms.
Ravn says that Vikings also made use of less-adaptable cargo ships during this period that could carry equipment and supplies for armies.

Ravn’s experience as a crew member on reconstructed longships taught him that life onboard could be very cramped.
Warriors would have had to work well together just to operate the vessels, he says — but the experiences also produce strong personal bonds.
“All of this creates a very tight and well-organized community,” Ravn says.
“It’s a very special experience.”
This well-knit connection between warriors would have served them later on during their raids.

Organization, seamanship and technology all would have combined to give the Vikings an upper hand starting in the late 8th century.
But at the same time as other Europeans were victimized by the Vikings, they were also learning how to resist these types of assaults.
By the mid-11th century, mixed populations of Vikings and Europeans were savvy to their maritime tactics.
The Normand King William the Conqueror — himself a descendent of the Viking Rollo, defeated the English with the Battle of Hastings in 1066 and was crowned king.
A few other major Viking attacks occurred over the next century or so in different parts of the British Isles and Europe, but they were often repelled.
Links :
Posted by geogarage at 1:03 AM