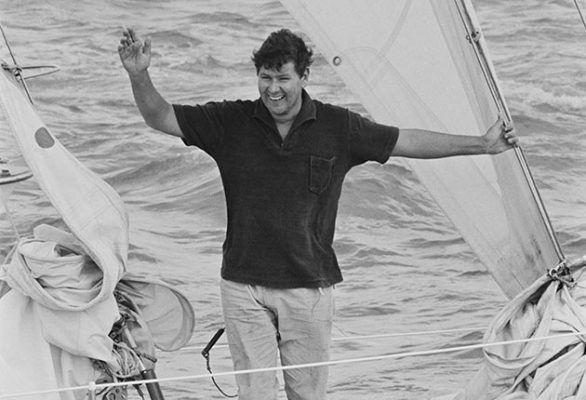 50 years ago Chay Blyth became the first person to sail solo, non-stop, westwards around the world. Dee Caffari, the first woman to emulate his record, looks back at his achievement

(1 Aug 1971) Lone round the World yachtsman Chay Blyth seen 50 miles off Land's End as he neared the end of his voyage
Before the attempt, Sir Francis Chichester commented that he thought the voyage was impossible, and on completion it became known as ‘The Impossible Voyage’.
The Times newspaper in London described it as, ‘The most outstanding passage ever made by one man alone’.
It is still considered the toughest challenge in sailing; only five people have ever managed it, a number which becomes more significant when compared to the 12 people who have walked on the moon.
The plan began in earnest to sail the ‘wrong way’ round the world in 1969.
It was not until 18 October 1970 that Chay Blyth departed from Southampton on board the 59ft ketch, British Steel.
His voyage had never been done before: to sail single-handed, non-stop, westwards around the world.
Thousands cheered and their Royal Highnesses Prince Philip, Prince Charles and Princess Anne were there to greet him as was the then prime minister, Edward Heath. 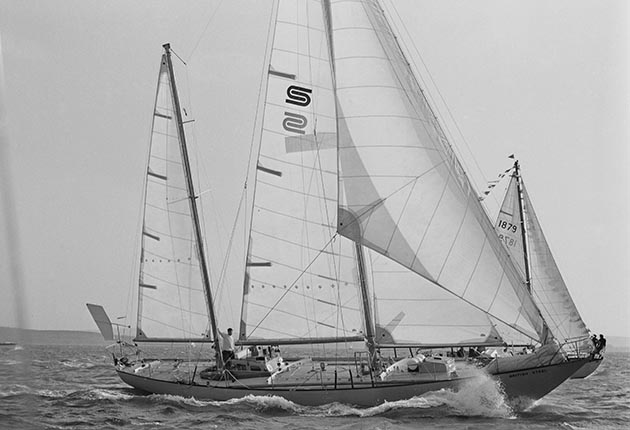 In recognition of his impressive achievement, he was made a Commander of the Order of the British Empire.
Sponsorship was vital to the success of the venture and Chay secured the backing of The British Steel Corporation.
This experience of gaining and developing a relationship with a major corporation was to shape not only Chay’s personal exploits in the following years but also his business initiatives too.
Those skills were something he happily passed on and I remember receiving advice from Chay about business meetings and how the world of corporate sponsorship worked during regular chats when I was preparing for my solo voyage.
Preparation for such a voyage is an endless task with phone calls, meetings, challenges and hurdles all to be overcome.
There are infinite decisions that need making and as you are the only sailor involved, you are the only one that can make the final decision.
The hours of commuting from boatyard to boardroom and back again gives you plenty of time to think. 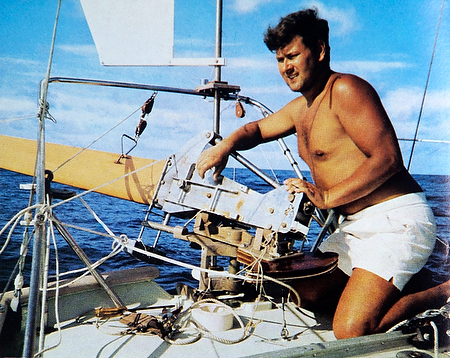 40th anniversary of Chay Blyth’s return
Chay, and his wife Maureen, worked tirelessly through their tasks.
I also remember driving back and forth during my preparation, making calls and endless lists. It’s not something that can be done alone.
You need a support network and those closest to you are crucial in fulfilling that role.
Without their support the dream never becomes a reality.
As departure day came closer Chay talked about it being not possible to be completely ready as there was always last-minute organised chaos.
The final night ashore you are unable to relax, your mind racing through final checklists, mixed with nerves and anxiety.
No one can take any more days of tension and pressure – all you want is the start line.
Chay recalled his emotions at his start: ‘I think you are beyond feeling, you don’t feel anything.’
As mentor for my ‘Impossible Voyage’ in 2005/6, his parting words to me as I set off, were to remind me not to cry – it had been done before.
Asked how I felt, I think, like Chay, I was too busy initially to feel anything.
Then it was overwhelming. I was heading towards the Lizard Lighthouse, the stopwatch started and I was swamped with the reality of what I had chosen to undertake.
It took a while to settle into a routine.
Calms and light airs were conditions that both Chay and I seemed to find most difficult to tolerate.
Chay often talked to himself, a trait I can relate to.
It is like giving yourself a running commentary or a set of instructions out loud to follow.
The benefits are two-fold.
First it gives you confidence in your decisions on what actions to take.
It also feels like you have some dialogue or company while you do it.
Both of us were plagued with autopilot issues and had to constantly fix or hand steer in certain conditions, testing our resolve.
Chay had his army and para training to draw upon, and I had my stubbornness and tenacity, but both of us were determined to see things through.
A common topic that comes up no matter whose sailing memoirs you read are the constant references to food.
In the preparation phase the focus is all on performance, sails, navigation, boat systems and weather. 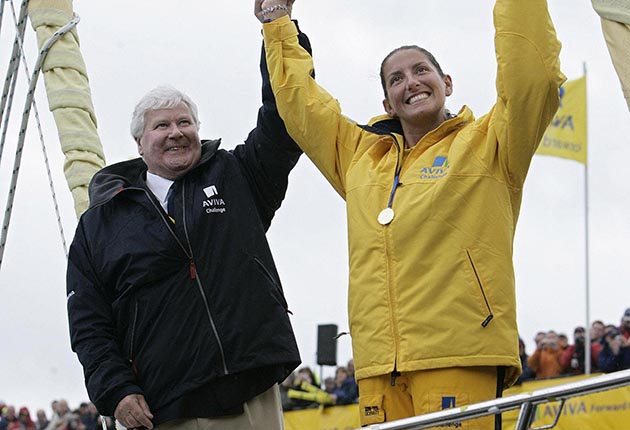 Sir Chay Blyth with Dee Caffari after finishing her own solo Impossible Voyage in 2006.
Credit: Getty
But the reality is that when you are out there, it is the fuel you consume that keeps you going.
That, and sleep or rather the lack of it at times, and how that affects your mood in difficult circumstances.
Recognising how you react at these times, so you can do something about it, is something I probably underestimated in my voyage, despite having read about it in Chay’s book.
My relationship with Sir Chay Blyth started when I was one of his skippers in the 2004 Global Challenge Race – ‘The World’s Toughest Yacht Race’.
He planted the solo non-stop seed in my mind during the Cape Town stop-over, while we were chatting after dinner.

Since his Impossible Voyage, only three men had followed in his footsteps, Mike Golding, Philippe Monnet and Jean-Luc Van den Heede.
In Chay’s opinion it was only a matter of time before a woman would do it, so why shouldn’t it be me?
Sir Chay Blyth may not have directly passed on his tips and techniques for dealing with mountainous seas and gale force headwinds, but the 14 years’ experience of sailing on Global Challenge races and the teams he put together to compete in them clearly benefited me.
I trusted their confidence and Blyth’s belief in me and my abilities.
When I crossed the finish line 15 years ago, having sailed myself into the history books following in Sir Chay Blyth’s footsteps, the first call I made was to Chay.
I was standing on deck in the rain with the wind blowing 50 knots and the phone inside my hood.
He had heard the news and had popped the Champagne cork and he sounded proud.
As he wrote in the foreword of my book published the following year: ‘The Impossible Voyage may no longer be impossible, but it remains hard, very, very hard.’
Links :
Posted by geogarage at 1:10 AM