A clever robot spies on creatures in the ocean's ‘Twilight Zone’ 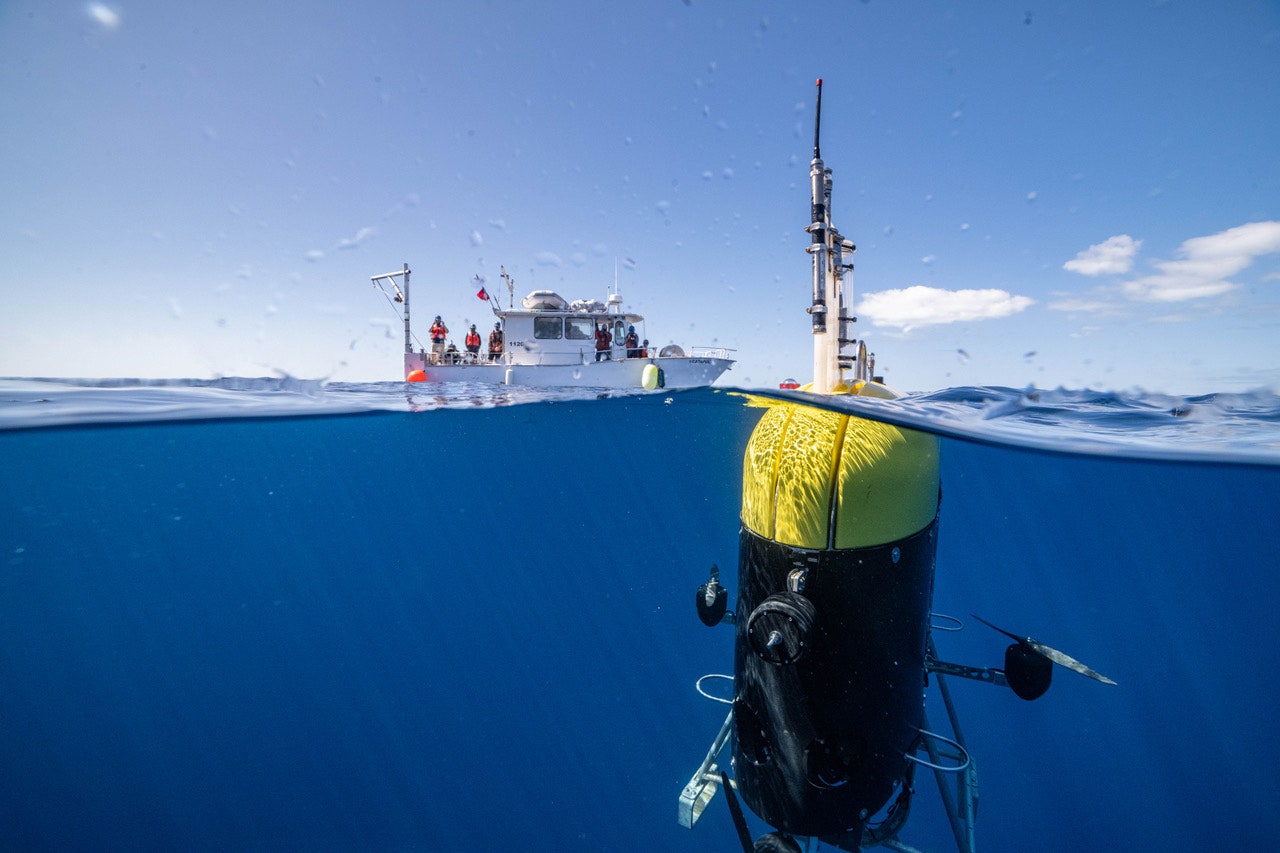 Mesobot looks like a giant AirPods case, but it's in fact a sophisticated machine that tracks animals making the most epic migration on Earth.

Thegrandest migration on Earth isn’t the journey of some herbivore in Africa or a bird in the sky, but the vertical movement of whole ecosystems in the open ocean.
All kinds of animals, from fish to crustaceans, hang out in the depths during the day, where the darkness provides protection from predators.
At night, they migrate up to the shallows to forage.
Then they swim back down again when the sun rises—a great big conveyor belt of biomass.
An innovative underwater robot known as Mesobot is providing researchers with deeper insight into the vast mid-ocean region known as the “twilight zone.”
Capable of tracking and recording high-resolution images of slow-moving and fragile zooplankton, gelatinous animals, and particles, Mesobot greatly expands scientists’ ability to observe creatures in their mesopelagic habitat with minimal disturbance.
This advance in engineering will enable a greater understanding of the role these creatures play in transporting carbon dioxide from the atmosphere to the deep sea, as well as how commercial exploitation of twilight zone fisheries might affect the marine ecosystem.
But now a spy swims among them: Mesobot.
Today in the journal Science Robotics, a team of engineers and oceanographers describes how they got a new autonomous underwater vehicle to lock onto movements of organisms and follow them around the ocean’s “twilight zone,” a chronically understudied band between 650 feet and 3,200 feet deep, which scientists also refer to as mid-water.
Thanks to some clever engineering, the researchers did so without flustering these highly sensitive animals, making Mesobot a groundbreaking new tool for oceanographers.

“It’s super cool from an engineering standpoint,” says Northeastern University roboticist Hanumant Singh, who develops ocean robots but wasn’t involved in this research.
“It's really an amazing piece of work, in terms of looking at an area that's unexplored in the ocean.”

Mesobot looks like a giant yellow-and-black AirPods case, only it’s rather more waterproof and weighs 550 pounds.
It can operate with a fiber-optic tether attached to a research vessel at the surface, or it can swim around freely.

video : Erk Olsen WHOI
Mesobot’s first bit of clever engineering is its propulsion system—large, slow-moving propellers that create low-velocity jets.
“Why are we so concerned about disturbing the water?” asks Dana Yoerger, a senior scientist at the Woods Hole Oceanographic Institution and lead author on the paper.
“Most mid-water animals are extremely sensitive to any hydrodynamic disturbance.
Because usually, that's something coming to eat them.” If you’re disturbing these animals, you’re not observing their natural behaviors.
(Unless you’re curious about what annoys them.)

The second clever trick ensures that Mesobot doesn’t bother its subjects by blasting them with light.
Well, at least not white light.
Yoerger and his team opted for a red beam, because it doesn’t penetrate seawater well.
“Evolution doesn't waste a lot of capability on stuff that doesn't work very well, so most animals are blind to red light,” says Yoerger.
That’s why when you see bioluminescent critters popping off in the deep sea, they’re blue or green.
“We use red,” Yoerger continues, “even though red is pretty lousy, because it doesn't go very far.
But it doesn't spook the animals as much.
And that's pretty well documented.
So it's a trade-off: You need a lot of light, you need a sensitive camera, and then you can work in the red.”

The tadpole-like larvacean
Courtesy of Mesobot
Using stereo cameras and detection algorithms, Mesobot parses its subjects’ movements and follows them.
Yoerger and his colleagues demonstrated the robot’s capabilities in California's Monterey Bay at 650 feet deep, as it detected and then pursued a hunting jellyfish.
Even more impressive, for a half hour it surreptitiously followed a fragile animal called a larvacean, which resembles a tadpole and builds a giant mucus “house” to filter its food.
(The robot did eventually disturb the extremely sensitive outer structure of the house, but the house's inner structure and the animal itself remained undisturbed.) Based on their testing, the team reckons the robot might be able to operate for more than 24 hours and reach depths of 3,200 feet.

For now, Mesobot can’t collect animals, but in the future it could employ a suction system to nab them.
Just observing sea creatures with a camera won’t tell you what they’ve been eating, for instance, and therefore where they fit into the food web—you’d need a dissection for that.
If you want to study their physiology, you need a physical specimen too.
“The idea would be you'd follow an animal for a while, and then you'd grab it.
I think that's very doable,” says Yoerger.

Mesobot may look like a big AirPods case, but compared to other crewed submersibles and ocean robots it’s actually quite compact.
Perhaps the most famous of all is Alvin, which the Woods Hole Oceanographic Institution also operates.
It weighs 45,000 pounds and can launch from just one specific ship.
Mesobot’s smaller size means it’s cheaper to build and more easily deployable, which will likely open the platform to more researchers.
“That's another big win,” says Singh, of Northeastern University.
“It doesn't need all this extra stuff—large winches, large ships.”

Scientists have long known that species are conducting a daily vertical migration, but up until now they’ve had to study it by catching them at different depths, or by using sonar to pinpoint where they are congregating at a given time.
After all, it’s not like you can slap a tracker on a jellyfish or larvacean to monitor its movements in fine detail.
“We have so few observations about a lot of fish,” says Luiz Rocha, curator of fishes at the California Academy of Sciences, who studies reefs in the twilight zone but wasn’t involved in this new work.
“We don’t even know how they swim, let alone how they eat or how they reproduce.”

Mesobot tracks a jellyfish
Cortesy of Mesobot
And scientists don’t have a great idea of how different species that travel through mid-water are interacting; for instance, which predators follow their prey up and down the water column? Are the animals migrating in tight schools or in a more dispersed fashion? Or, how might climbing ocean temperatures influence how a given species migrates, and might that in turn influence others in its food chain? Oceanographers could try to track them with submersibles, but anything less stealthy than Mesobot would probably scare all the subjects away.
“But if you have a robot that can stay submerged up to 24 hours and follow a fish or a group of fish for all that time, then you can think about studying those phenomena,” says Rocha.
Links :
Posted by geogarage at 1:04 AM