The arrangement or layout of a set of charts is called a scheme – a systematic configuration of chart “footprints.” NOAA is creating a new gridded layout of rectangularly shaped charts for its electronic navigational chart (NOAA ENC®) product suite.
A number of improvements to NOAA ENCs are being made in conjunction with the rescheming project.

In the early 1990s, NOAA began digitizing paper nautical charts to create a new digital chart product, the electronic navigational chart.
The scale and limits of each ENC chart (called a cell) were inherited directly from its corresponding paper chart.
The resulting ENC product suite consisted of over 1200 irregularly shaped ENC cells, compiled in over 100 scales.

Below, the original layout of the “approach scale” ENCs in the Great Lakes is shown in red.
The new gridded scheme for the same coverage is shown in blue. 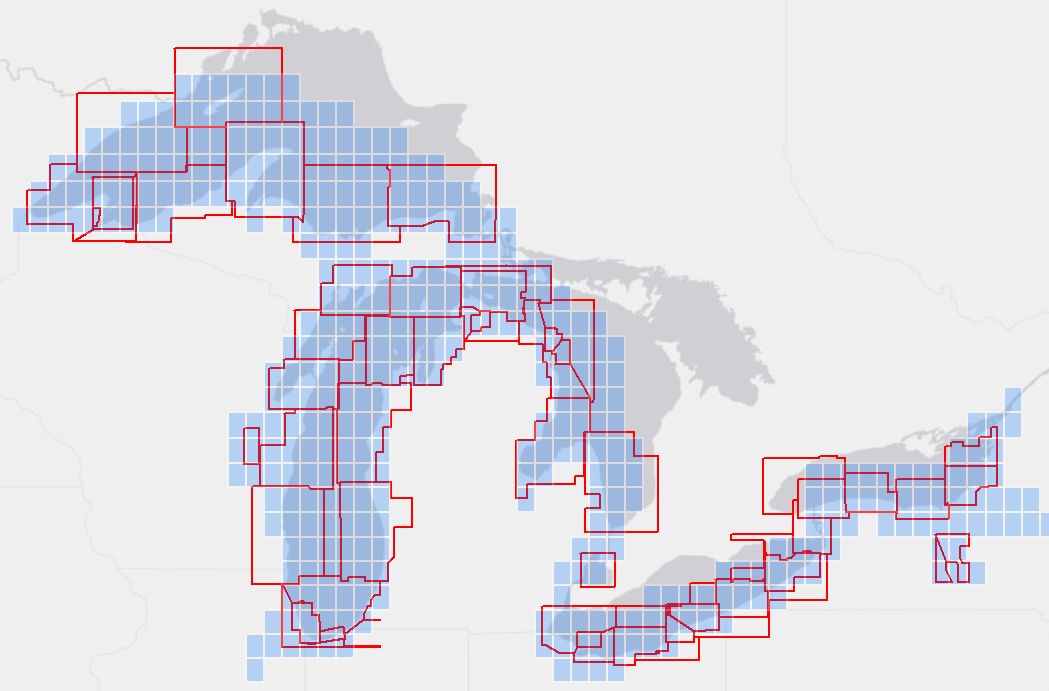 Comparison of old and reschemed ENC coverage over the Great Lakes
The new scheme for all NOAA ENCs may be seen on the Status of New NOAA ENCs webmap, which also shows the ongoing progress of creating reschemed ENCs.

Why NOAA is focusing efforts on improving the ENC?

There is a growing need for ever more detailed nautical charts.
This is driven by several factors, including larger ships now entering ports and transiting channels with the tightest of under keel clearances – requiring more precise depth information, the greater adoption of (in some cases, the requirement for) use of digital charts, electronic navigational systems, and GPS – requiring greater positional accuracy.

Since July 2018, the International Maritime Organization (IMO) has required nearly all commercial ships on international voyages to use an Electronic Chart Display and Information System (ECDIS) and ENCs (as specified in the International Convention for the Safety of Life at Sea (SOLAS), Chapter V, Regulation 19, "Carriage requirements for shipborne navigational systems and equipment").
ECDIS is a sophisticated navigation system that is integrated with other ship equipment and sensors, such as GPS, gyroscopes, and sometimes radar.

In 2016, the U.S. Coast Guard (USCG) published Vessel Inspection Circular No. 01-16 (NVIC 01-16).
This announced that commercial ships on domestic voyages within U.S. waters may now use ENCs in lieu of paper nautical charts.

Recreational boaters are also making greater use of ENCs and developers of navigation and chart display systems have responded by making ENC compatible equipment available to a broader community of users.

ENC usage bands and standard scales :
Paper nautical charts and ENCs are created at various scales for different navigational purposes.
The smallest scale (least detailed) “Overview” charts are used for basic voyage planning.
The largest scale (most detailed) “Harbor” and “Berthing” charts are used for navigating into harbor and maneuvering to a pier or wharf.
ENCs are categorized into six usage bands, sometimes called scale bands.

The new ENC scheme uses only 11 scales, two each for bands 1 through 5 and one for band 6.
The table below compares the scale ranges of the old ENC scheme to the new standard scales for reschemed ENCs.

New Standard ENC Compilation ScalesStandard ENC cell shape and size
The new ENC layout consists of nested cells whose boundaries follow lines of longitude and latitude.
Sixteen larger scale ENC cells fit inside one cell of the next smaller scale band.
The figure below shows how 16 band 3 cells (green squares) fit inside one band 2 cell (brown) and the relative sizes of the other bands. 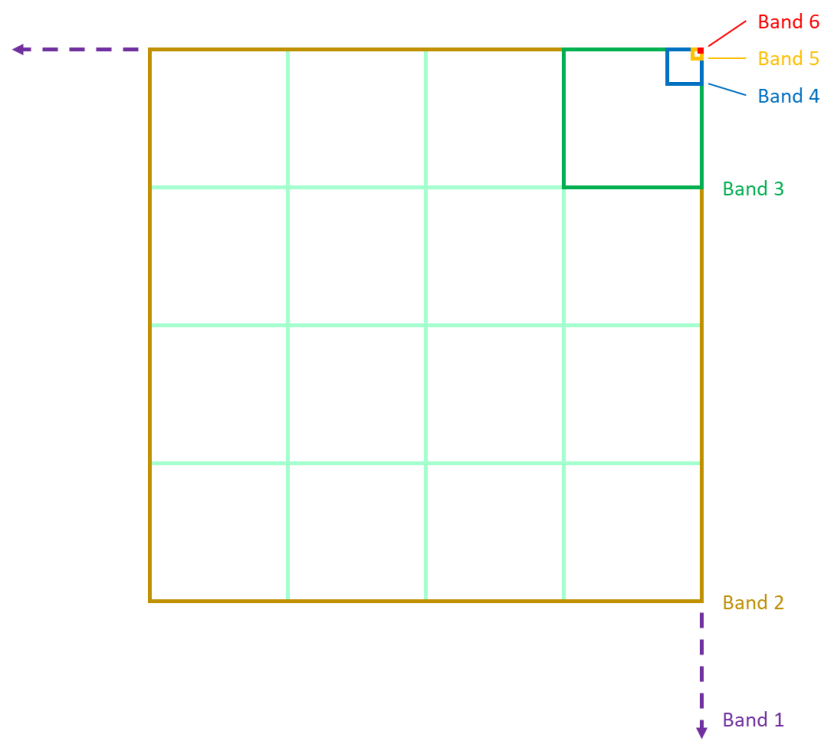 On the globe, lines of longitude – also called meridians – converge at the Poles.
Thus, the area of the Earth covered by ENC cells defined by equal extents of latitude and longitude will be narrower for ENCs further away from the Equator.
Reschemed ENC cells take this narrowing into account.
Cells closer to the poles are widened by increasing their longitudinal extent as a multiple of their height.

Distance between meridians decreases as they converge at the poles
Thus, ENCs are wider longitudinally as they get further from the poles, so the extent of the coverage “on the ground” doesn’t get too narrow. 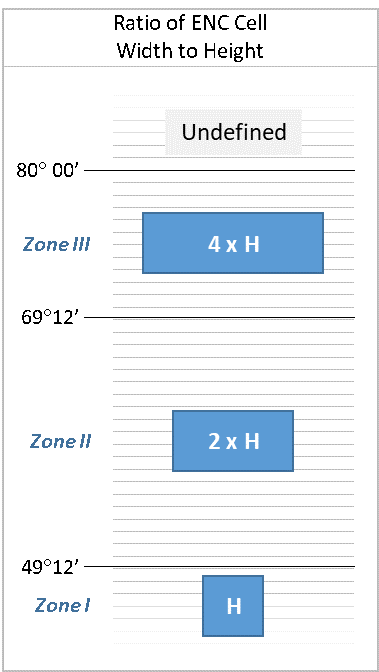 Width of an ENC cell is a multiple of its height (H), depending on the latitude of the cell
The table below shows cell widths, for each zone, for each usage band, in decimal degrees of longitude.
Cell dimensions are the same for both of the two standard scales in each usage band.
For example, the height of all band 3 ENC cells is 1.2˚ in latitude.
Band 3 cells below 49˚ 12’ N fall into Zone I and have a cell width equal to their height.
Thus, band 3 cells in Zone I have a width of 1.2˚ in longitude.
Band 3 cells falling between 49˚ 12’ N and 69˚ 12’ N are in Zone II and have a width of twice their height, or 2.4˚ in longitude.
The width of cells falling in Zone III is four times their height, or 4.8˚ in longitude.

New Standard ENC Compilation Scales
For band 2 ENCs, all cells with the contiguous 48 states are considered to be in zone I.
Band 2 ENCs west of Washington State in the North Pacific are considered to be in zone II, except for ENCs in Alaska covering Point Hope, the North Slope and the Artic Sea, which are considered Zone III.
Band 1 ENCs will be some of the last cells created as part of the rescheming effort.
The placement of individual band 1 cells within specific width zones has not yet been established.

As new gridded ENCs are created, a number of improvements to the quality and consistency of the data are being implemented.Larger, standard scale coverage

If coverage in the original ENC scheme was not compiled at a standard reschemed scale, then the reschemed cells are usually “bumped up” to the next larger scale.
An example of this is the new band 4 coverage in Lake Superior, in which the 1:120,000 scale ENC coverage was replaced by more detailed 1:80,000 cells.

When NOAA digitized paper charts to create the first NOAA ENCs, depth values for soundings, depth curves, and other features with depths were converted from the fathoms and feet shown on the charts to meters to populate the ENC database.
The ENC product specification established by the International Hydrographic Organization requires depths to be stored as metric values.
However, the depth contours continued to reflect the intervals in which they were compiled.
Thus, depth contours of older ENC data displayed in meters will show fractional metric values resulting from the unit conversion from feet to meters, as shown in the image below.

When the ENC rescheming project is completed, all depth contours will be compiled in whole metric units.
However, some newly reschemed ENC cells will not be recompiled in their initial release (first edition) of the cell.
The image below shows examples of whole 2, 5, 10, 20, and 50 meter depth contours.
The depth value of soundings will also be stored and displayed with a higher degree of precision than available on paper charts.
Soundings less than 30 meters deep are stored and displayed as meters with subscripts in tenths of meters (decimeters) – a granularity smaller than 4 inches. 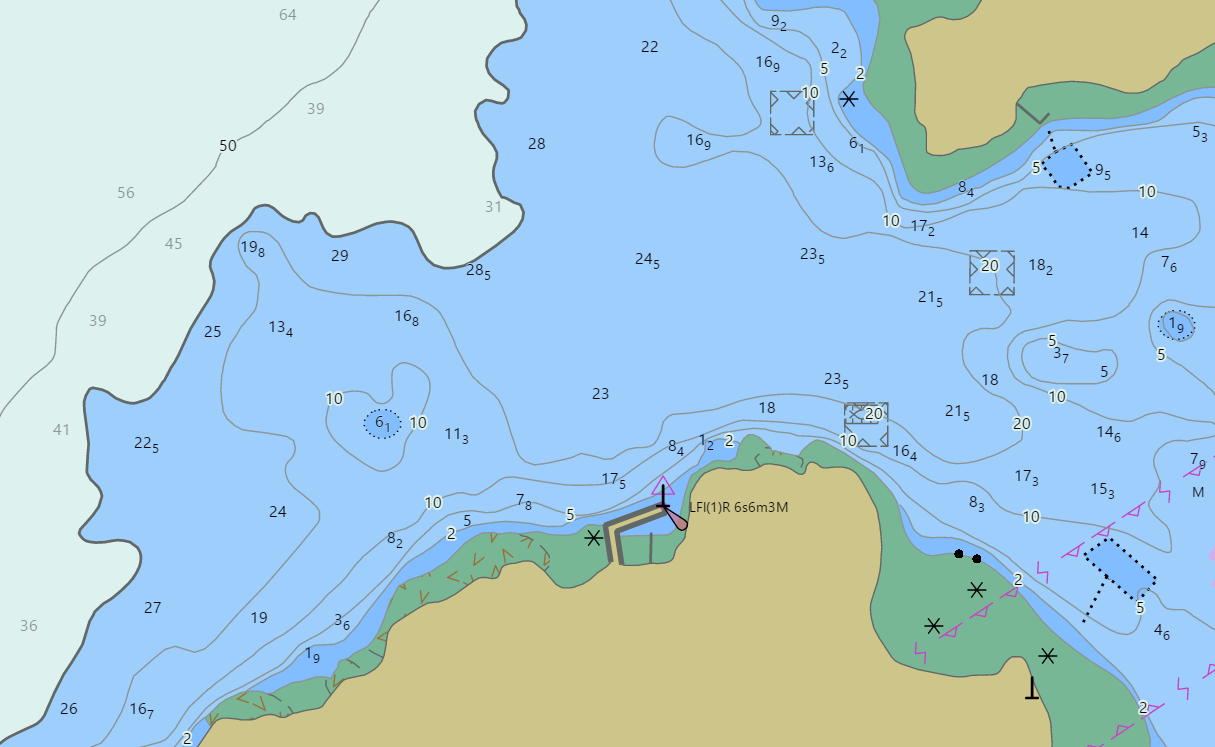 New Standard Metric Depth Contour IntervalsResolution of discontinuities in adjacent ENCs
The legacy of the original paper charts from which ENC data was digitized lives on in the current suite of ENCs.
Adjacent paper charts, even those having the same navigational purpose (harbor, approach, coastal, etc.) are often compiled at different scales to accommodate different paper orientations and sizes, or a desire to "stretch" coverage to include harbors or other features at either side of a chart.
Different depth contour intervals are often used on different scale charts, and the techniques for "edge matching" adjacent ENC cells of different scales can be challenging.
The figure below highlights discontinuities on three adjacent ENC cells.
Not only do depth contour intervals sometimes change between adjacent cells, depth contours of the same value, compiled separately, and at a different scale, sometimes do not match. 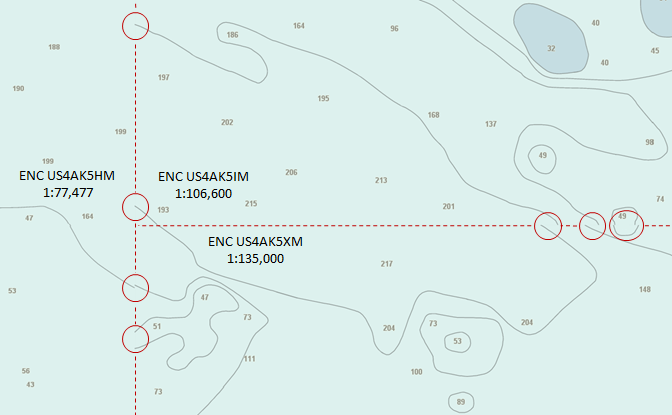 The progress of ENC rescheming can be tracked on the Status of New NOAA ENCs webmap.
Blue rectangles show planned ENC footprints, red show ENCs in work, yellow indicates cells in review, and green are completed ENCs that are available to the public. 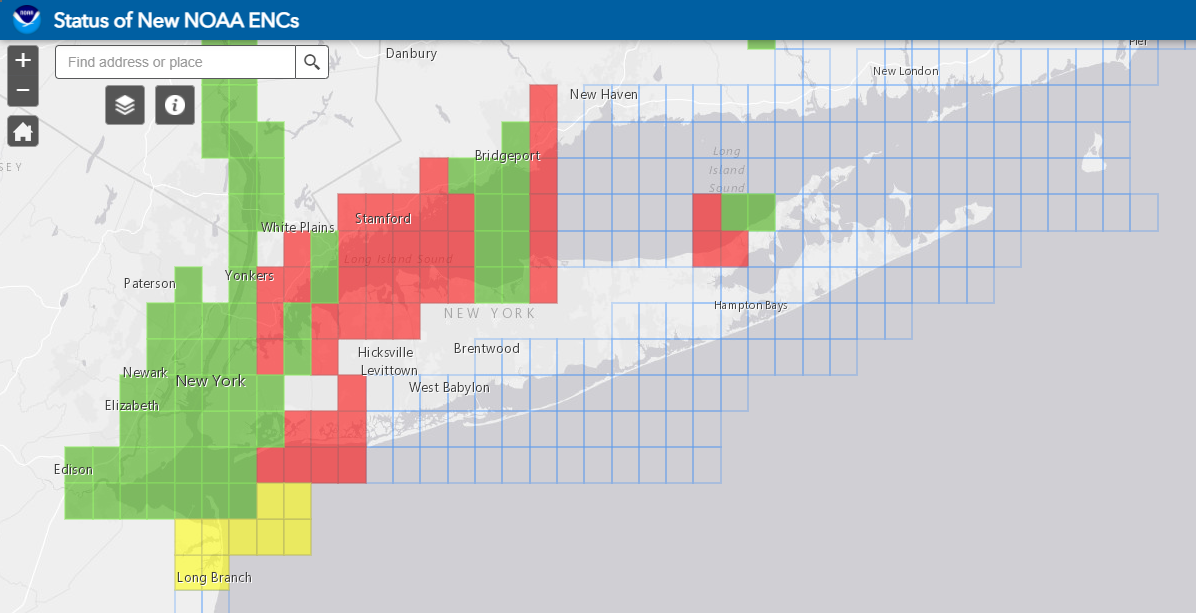 Posted by geogarage at 2:41 AM