The Hypothetical 200n.m. limit in the Mediterranean Sea
in the GeoGarage platform
From Soverign Limits by Marissa Wood

Or, Why is Mediterranean Maritime Sovereignty So Complicated?

The Mediterranean Sea could almost be considered an inland body of water, except for a small connection to the Atlantic Ocean (only 16 km or 10 miles) between the coasts of Spain and Morocco at the Strait of Gibraltar.
The waters of the Mediterranean can be further divided into the Alboran, Libyan, Levantine, Aegean, Ionian, Adriatic, Tyrrhenian, and Balearic Seas.
Twenty-three separate States lay claim to the waters of the Mediterranean Sea, and many of these are overlapping or disputed leading to an incredibly complex picture of maritime sovereignty.
The Established Boundaries

There are, however, twenty-two established maritime boundaries between the various Mediterranean States.
The oldest is between Cyprus and the UK on behalf of its Sovereign Base Areas (SBAs) of Akrotiri and Dhekelia located in the south of the island.
Both the land and maritime boundaries between the SBAs and Cyprus were established by the same agreement from which Cyprus gained its independence from the UK on 16 August 1960.
The maritime boundary extends in four separate parts from the various land boundary termini on the coast and delimits the UK’s claimed three nautical mile territorial sea and Cyprus’s 12.
The UK ceded all exclusive economic zone (EEZ) claims to Cyprus. 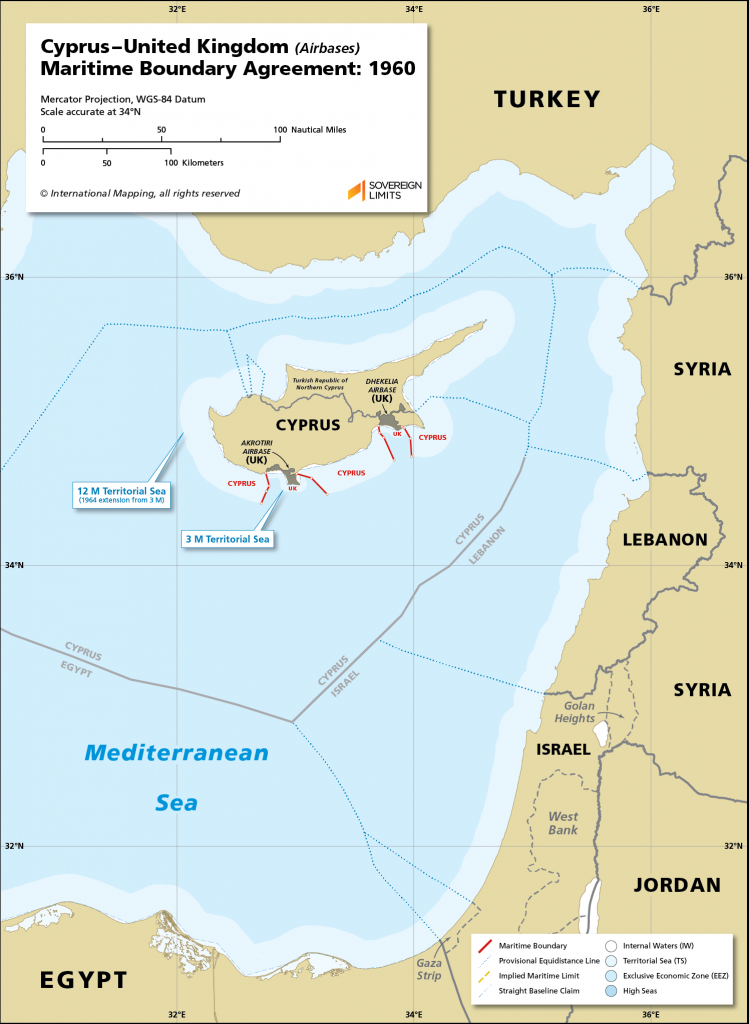 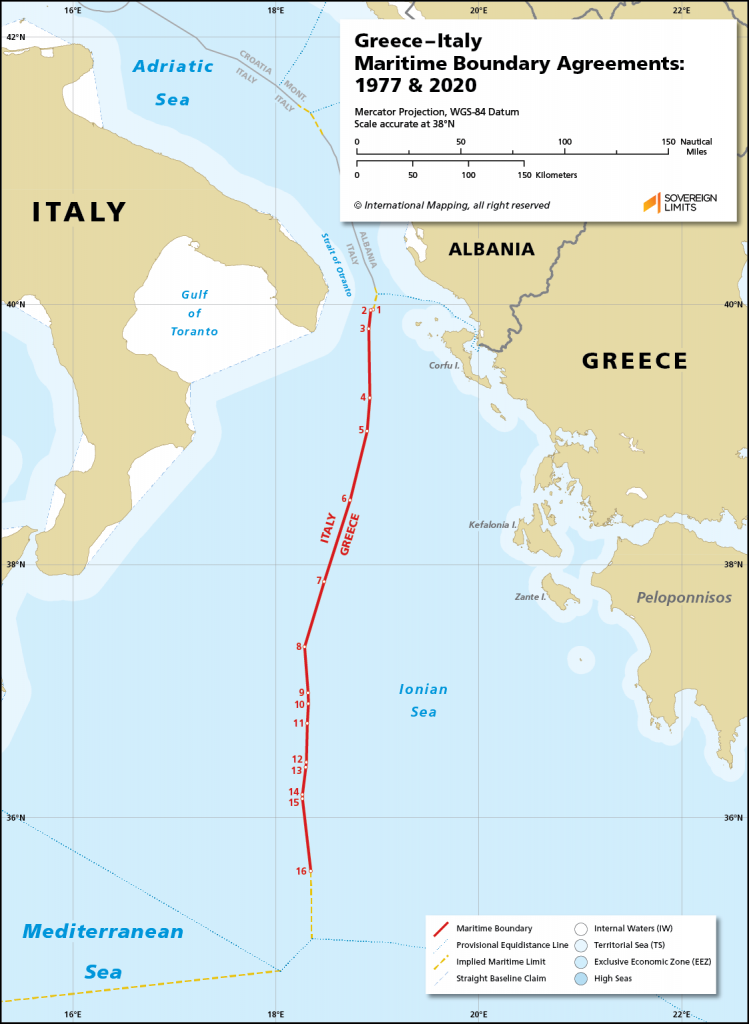 Surprise! Greece and Egypt signed a new EEZ boundary Agreement on Thursday, August 6.
The details have not yet been released to the public, but both Turkey and Libya have already protested the new boundary.

That leaves about 30 maritime boundaries to be established, some of which are currently being negotiated (Greece and Albania) and some of which have 300 plus years of dispute that will need to be resolved before maritime boundary delimitation can begin (Spain and the UK on behalf of Gibraltar).
Disputed Maritime Space

When looking at disputed maritime areas in the Mediterranean, Turkey is the shadow over all of the eastern Sea.
Its role in the Cyprus–Northern Cyprus conflict as well as the full extent of maritime disputes with Greece will be discussed in greater detail below.
This section is to delve into Turkey’s full set of unilateral maritime claims which were updated in 2019. 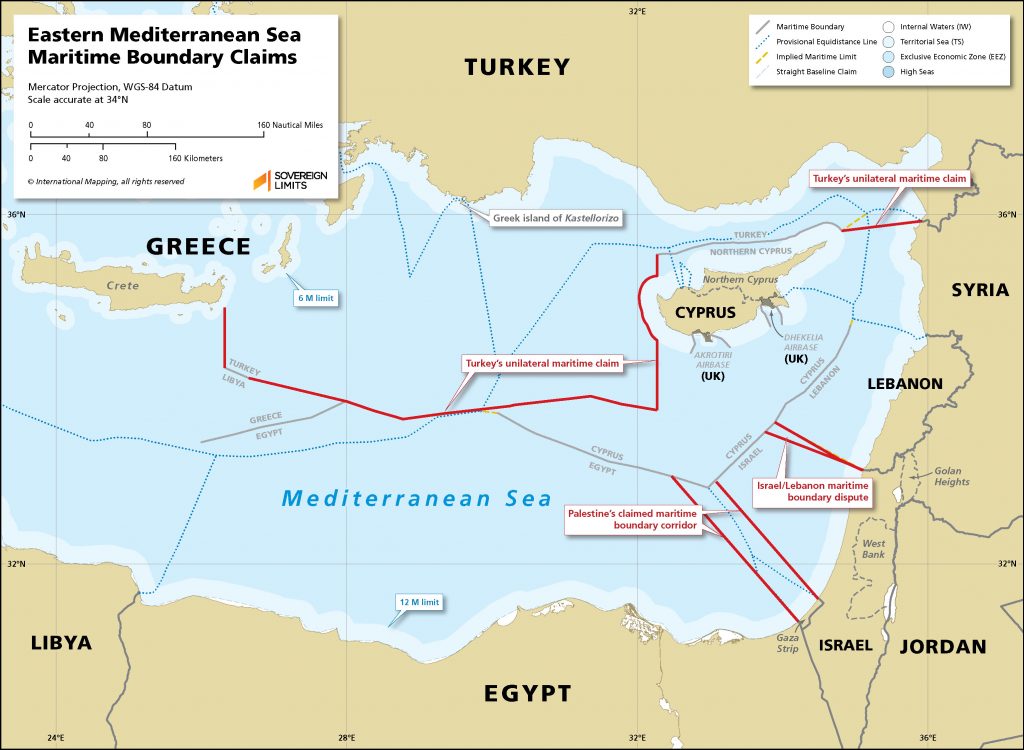 Unilateral maritime boundary claims and provisional equidistance divisions create a messy picture of potential sovereignty in the eastern Mediterranean.
The full extension of Turkey’s EEZ claims is based on a 2019 map published by this news source.
This map depicting extensions of Turkey’s EEZ claims was released by a Turkish diplomat in December 2019 (the map source and more information is from this article).
To capture the complicated nature of all of the other claims and established maritime boundaries, we’ve overlaid Sovereign Limits maritime data over top.
Between points A and B is the established maritime boundary with Northern Cyprus and between points E and F the new line with Libya.

Additionally, on 27 November 2019, Turkey and the UN-backed government of Libya (Libya is in the midst of a civil war, so yes, there are two entirely separate governments) signed a short, two-point maritime boundary agreement that dangles in the middle of Greek-claimed sea.
This new boundary enraged neighboring Greece and Egypt as well as the entire EU.
Its location deviates from the equidistance default stipulated by UNCLOS.
Turkey and Libya note that the bilaterally negotiated boundary has nothing to do with third states, but as Greece claims the waters surrounding this new delimitation, it has caused quite a stir.
The new August 2020 Egypt–Greece maritime boundary likely overlaps with the Libya–Turkey boundary in some capacity.

The conflict between Cyprus and Northern Cyprus would not have reached its modern outcome without Turkish involvement.
Disagreements between Turkish Cypriots and Greek Cypriots on the island of Cyprus have been ongoing since even before Ottoman control of the island, and the modern conflict began shortly after independence from the United Kingdom.
Turkey moved to occupy northern Cyprus in 1974 and the Turkish Republic of Northern Cyprus declared independence in 1983.
Today, Turkey is the only country who recognizes Northern Cyprus’s statehood.

The island of Cyprus is now divided by a UN mandated and monitored buffer zone that snakes its way through hilly territory and divides the capital city (for both Cypruses) of Nicosia.
The southern Greek Republic of Cyprus is an EU member and is recognized by the UN as the sole sovereign power of the island.

Turning to the maritime disputes between Turkey and neighboring Greece offers an even more complicated picture (at least delimitation wise) due to the multitude of Greek Islands that lay just off the Turkish coast.
Relations between Turkey and Greece have been historically complicated and often quite problematic, negativity driven by both the conflict in Cyprus and unresolved maritime issues in the Aegean Sea.
Oil was discovered in the continental shelf in 1973, adding [literal] fuel to the fire. 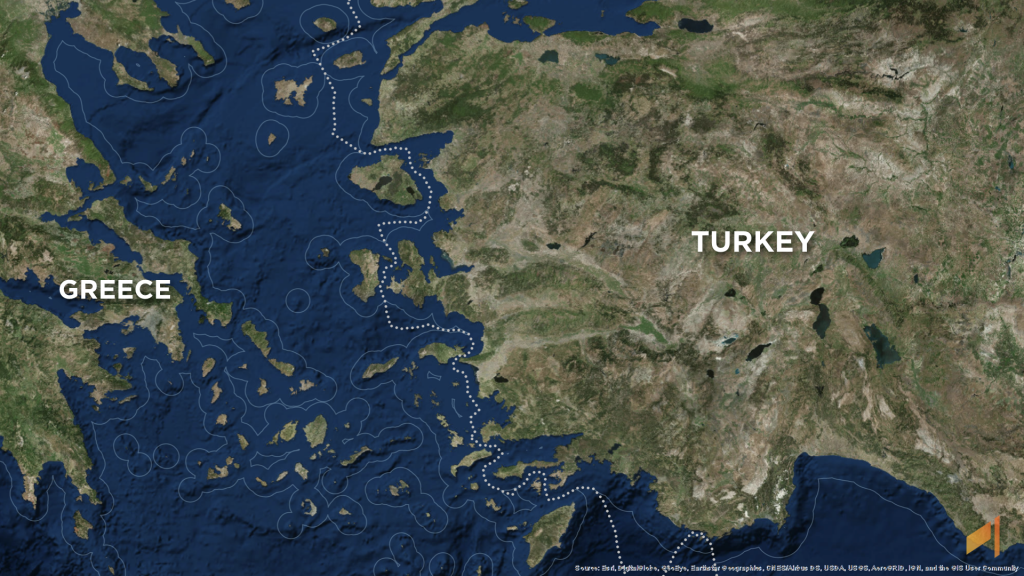 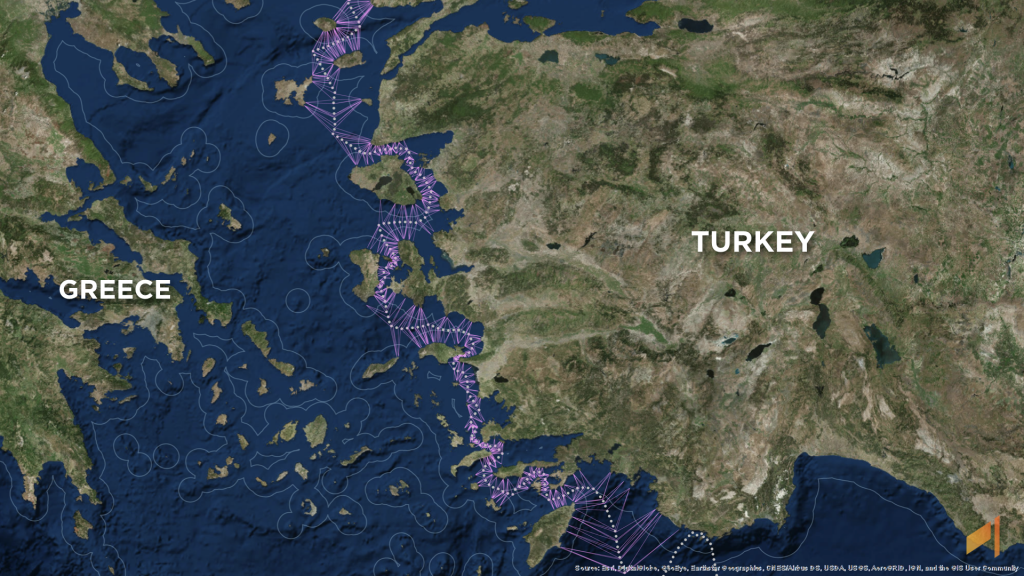 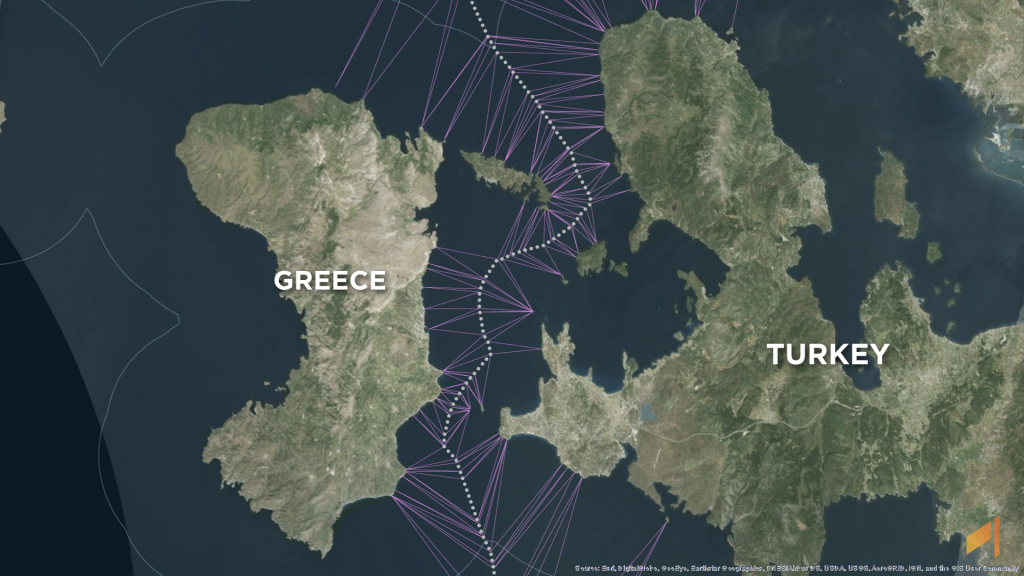 This series depicts the intricacies of constructing a strict equidistance line between Greek Islands and the Turkish coast in the Aegean.
Turkey’s proposed maritime boundary lies to the west of equidistance.

There is also at least one officially disputed island between Turkey and Greece known as Imia by the Greeks and Kardak by the Turks.
Turkish claims to additional islands have been made and redacted over the years.

Conflict over Greek and Turkish maritime claims is common.
During the summer of 2020, Turkey has been conducting seismic surveys in Greek-claimed waters.
And Greece is working on increasing its military power in response to Turkish aggression.
Meanwhile, diplomats from the two states also sat down for a round of negotiations.
In August, Greece called for talks to continue or a referral of the dispute to the ICJ.
To read more, check out this article.

Looking beyond Turkey-centered disputes, there is a handful of interesting and impossible to resolve conflicts that speckle the entire Mediterranean Sea and neighboring bodies of water.
Israel and Lebanon seem to be constantly in conflict over both their unresolved land boundary and maritime frontier.
Natural gas reserves have been discovered in maritime space that both states claim, and in 2018 Lebanon auctioned off several disputed oil blocks.
Israel is currently working on its own oil exploration in the disputed area. 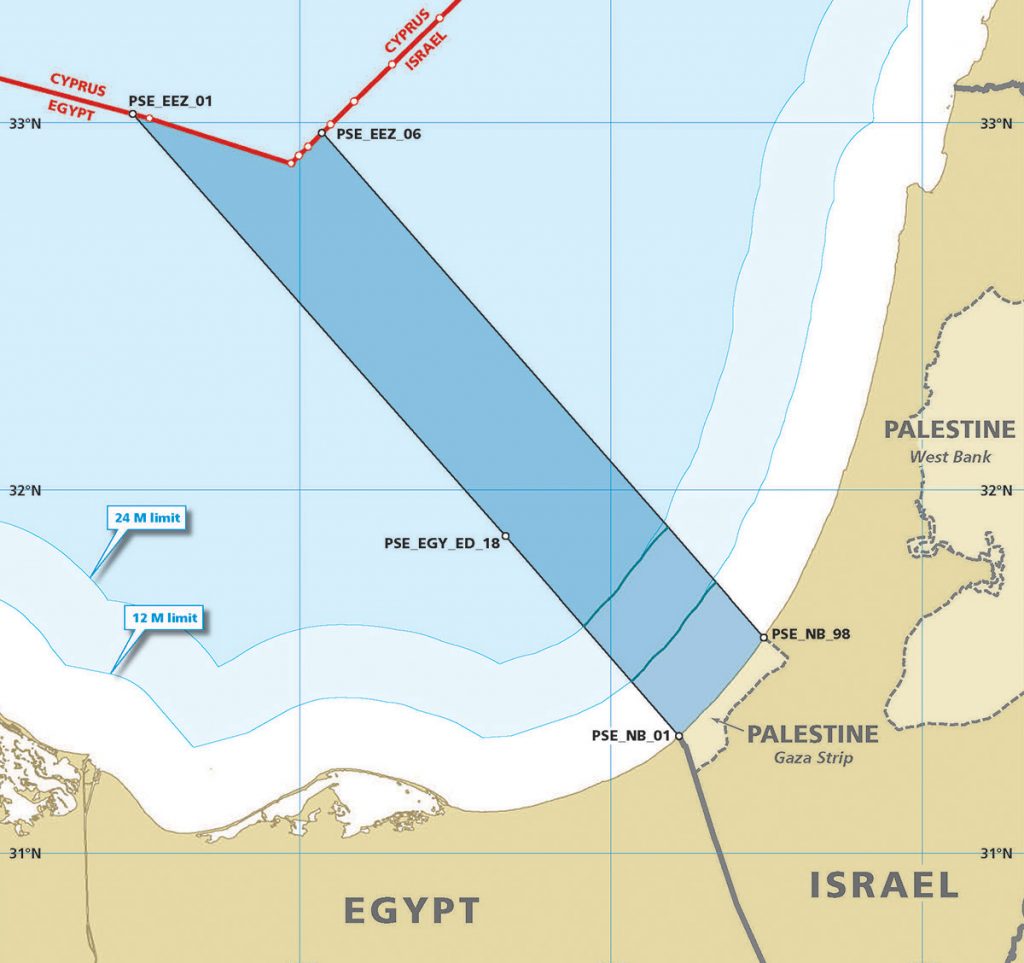 Palestine’s unilateral maritime claims extend from the Gaza Strip out to the already established boundaries with Cyprus.

The former Yugoslav States of Croatia and Slovenia also have disputed maritime space in the northern Adriatic Sea despite a 2017 Permanent Court of Arbitration Award delimiting the boundary (Croatia had unilaterally withdrawn from the case in 2015 following a scandal).
Slovenia accepts the Tribunal’s delimitation, but Croatia does not.

The remaining maritime disputes in the western Mediterranean, which stem from disputed land boundaries and sovereignty claims, are quite similar (although Spain wouldn’t have you think so).
I’ve briefly discussed the UK–Spain conflict over Gibraltar in this blog, and Kevin went into great depth on the dispute between Spain and Morocco over the Plazas de Soberanía, Spanish controlled enclaves claimed by Morocco.
Each island or small territory, Perejil Island, Ceuta, Peñón de Velez de la Gomera, Islas Alhucaimas, Melilla, and Islas Chafarinas, all yield a strange smattering of Spanish maritime enclaves within Moroccan-claimed waters, making for quite the sovereignty mess in the western Mediterranean.

The possibilities of maritime sovereignty in the Mediterranean Sea are incredibly complicated with many neighboring states diametrically opposed to compromise.
The potential for oil and natural gas in the eastern Mediterranean has created a high stakes scenario that could spark conflict between interested parties.
While some states are actively involved in negotiations, it seems more likely that the potential maritime boundaries of the Mediterranean will get messier before a coherent picture of sovereignty is established.
Links :
Posted by geogarage at 1:26 AM