A large, orange Scandinavian robot gives NIWA’s marine geologists an in-depth look at changes to the seafloor off Kaikōura.

The 2016 earthquake left an all-too-visible trail of destruction across Kaikōura’s landscape.
Buildings were shattered, road and rail links severed, and massive scars cut across hillsides and coastal terraces alike.

What wasn’t so immediately obvious was the impact the 7.8 magnitude quake had on the deep underwater canyon just hundreds of metres off the coast. 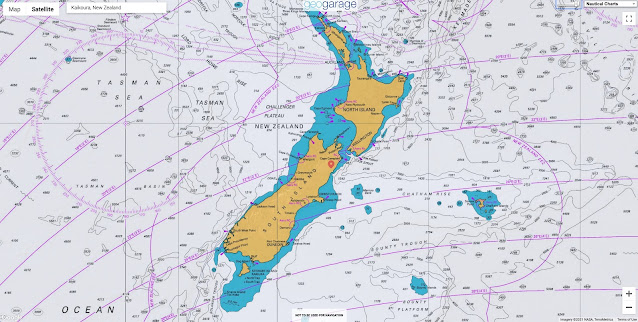 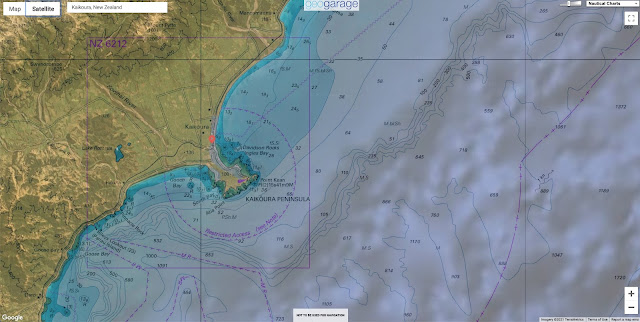 localization with the GeoGarage platform (Linz nautical raster chart)
The Kaikōura Canyon starts less than a kilometre out from land, as the seabed plunges to depths of more than 600m, and eventually to 2000m, creating a formation of channels and ravines which fan 60km out into the Pacific Ocean.

Cold currents rising from the deep bring nutrient-rich waters into the canyon system, helping to create a uniquely productive habitat nourishing organisms ranging from small seafloor invertebrates through to the region’s iconic dolphins and whales.

Marine geoscientist Dr Joshu Mountjoy describes the canyon as the bridge between the land and the ocean, connecting sedimentary systems, capturing carbon and supporting rich ecosystems.

Multibeam seabed surveys carried out by NIWA’s research vessels Tangaroa and Ikatere after the 2016 quake revealed dramatic changes.
Huge amounts of mud and sediment, estimated at 850 million tonnes, were shaken from the canyon rim, flowing down the underwater channels and out into the Pacific. The AUV’s high resolution mapping technology reveals huge boulder ridges running across the seafloor more than a kilometre below the surface.

This massive submarine sediment flow, tracked at least 700km to the north, instantly turned the canyon floor from a biodiversity hotspot full of marine life into a barren, almost uninhabited seascape.

Late last year Mountjoy led another team of researchers back to the waters off the Kaikōura coast aboard Tangaroa.

“We were interested in understanding the physical process that had removed such a huge amount of sediment and rock from the canyon. It was also a chance to establish how the ecosystems were recovering after such a major event, and measure the amount of sediment re-entering the canyon,” Mountjoy says.
“Although we had done surveys before, we now needed a way to capture the extent of the post-earthquake changes at a much higher resolution.”

To get such a detailed picture of conditions almost two kilometres under the surface, Mountjoy recruited the help of the European marine research alliance, Eurofleets+. NIWA is the only southern hemisphere member of this 27-country alliance.

In October, Rán, a 6.5m autonomous underwater vehicle named after the Norse goddess of the sea, arrived in Wellington on loan from Sweden’s Gothenburg University. Technicians reprogramme Rán as the AUV prepares for its next mapping mission off the Kaikōura coast.
[Photo: Lana Young, NIWA]
Fully equipped with its own suite of sensors for remotely scanning the seafloor and monitoring oceanographic conditions, Rán was also accompanied by two European technicians who both had to undergo full quarantine procedures prior to joining the voyage.

Pre-programmed and deployed from the stern of Tangaroa, Rán descended to the depths of the canyon floor, operating for up to 29 hours before needing to return to the research vessel.

It is the first time this type of technology has been used in New Zealand waters, and sweeping as low as 20m above the seabed, the AUV was able to map the entire canyon floor at resolutions 25 times higher than earlier surveys.

During Tangaroa’s research voyage, Rán completed a total of 14 dives, surveyed over 2,000km of seafloor at an average speed of 7km/h, and acquired a staggering 1.6 billion datapoints.

“The data has given us unprecedented insight into how submarine canyons are created,” says Mountjoy.
“The mid-lower canyon is dominated by giant gravel waves that are carving out the bedrock.
“We already knew that dunes 20m high and 200m across had shifted 500m down the canyon. But the data collected by the AUV now shows that these dunes are made of boulders up to 7m across."
“It is hard to imagine how much power is required to move rocks of that size, but that’s exactly what has happened in that area.”

The research team are currently working their way through the detailed data files recovered during Rán’s successful mission – a high-resolution treasure trove which Mountjoy believes will lead to a clearer international understanding of post-earthquake continental shelf processes.
Links :
Posted by geogarage at 1:30 AM