Radar shoreline map of Plymouth Sound,
a byproduct of the software used for the survey (Royal Navy) 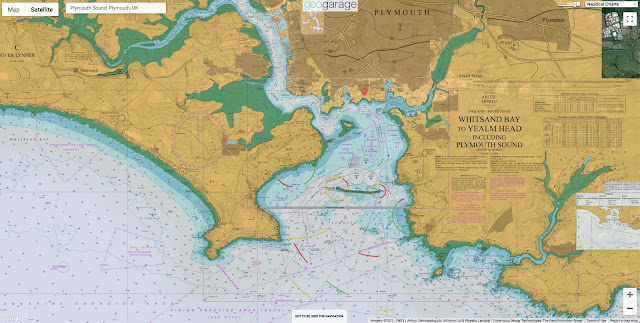 The Royal Navy has tested cutting-edge software to map the seabed close to shore in hours – not days or weeks.

Survey vessel HMS Magpie was able to chart the waters around Plymouth purely using regular radar installed on shipping the world over and a specialist computer program which measures wave height.

Using that data and information about currents, the software can produce a detailed profile of the seabed in a matter of hours – without the ship or boat having to physically sail over the area being surveyed.

All the system needs is wind and a swell to generate waves – plus computing power. HMS Magpie off Portsmouth (Royal Navy)
It is not as detailed as the scans Magpie or other Royal Navy survey vessels can produce with their hi-tech sonar suites – and it only works close to shore.

But the method – known as radar bathymetry and developed by scientists from the National Oceanography Centre in Liverpool and MOD experts from Defence Science and Technology Laboratory – could be vital in times of peace or war when time is critical. “By analysing the sea clutter images of waves visible on standard marine radars a bathymetric profile (that's the depth) and surface current assessment is created,” explained the lead project scientist at the National Oceanography Centre, Paul Bell.
“This technique could allow the remote charting of both shallow water and currents from a standoff distance of several nautical miles and could be employed by all Royal Navy Ships using the navigation radars that are already fitted with.”

Given her size, Magpie doesn’t carry the standard navigational radar used by the rest of the Fleet, so one was temporarily installed on a roof rack.

It would take the ship perhaps a fortnight to map the ocean floor on the approaches to Plymouth naval base and the Sound with her sonar.
It took the software just hours to do the same – and one by-product was an accurate composite map of the area’s coastline.

Time could be the difference between life and death in the aftermath of a natural disaster with a possible shifting seabed preventing the usual access to harbours or beaches or an amphibious landing on or evacuation from poorly/uncharted shores.

At present the software is still in development, but the goal is to integrate it with the Royal Navy’s existing navigational radar and systems – no new equipment would be required in most cases, just upgraded software – to provide accurate, real-time seabed maps.

“The Royal Navy is continually looking to employ new up-to-date technologies,” said Lieutenant Commander Mark White, HMS Magpie’s Commanding Officer.
“The beauty of this concept is that it uses the existing radars already fitted to our ships.
“It was excellent to work alongside the National Oceanography Centre to trial and develop these new and exciting techniques that could have a wide range of use in the Royal Navy.”

More regular duties are in store for Magpie shortly.
Having just emerged from her annual winter overhaul, the ship is due to head up the East Coast to conduct traditional survey work of ports and harbours.
Posted by geogarage at 1:18 AM