Atlantic Ocean circulation at weakest in a millennium, say scientists The Atlantic Ocean circulation that underpins the Gulf Stream, the weather system that brings warm and mild weather to Europe, is at its weakest in more than a millennium, and climate breakdown is the probable cause, according to new data.

Further weakening of the Atlantic Meridional Overturning Circulation (AMOC) could result in more storms battering the UK, more intense winters and an increase in damaging heatwaves and droughts across Europe.

Scientists predict that the AMOC will weaken further if global heating continues, and could reduce by about 34% to 45% by the end of this century, which could bring us close to a “tipping point” at which the system could become irrevocably unstable.
A weakened Gulf Stream would also raise sea levels on the Atlantic coast of the US, with potentially disastrous consequences.

see NYTimes interactive : In the Atlantic Ocean, Subtle Shifts Hint at Dramatic Dangers
Stefan Rahmstorf, of the Potsdam Institute for Climate Impact Research, who co-authored the study published on Thursday in Nature Geoscience, told the Guardian that a weakening AMOC would increase the number and severity of storms hitting Britain, and bring more heatwaves to Europe.

He said the circulation had already slowed by about 15%, and the impacts were being seen.
“In 20 to 30 years it is likely to weaken further, and that will inevitably influence our weather, so we would see an increase in storms and heatwaves in Europe, and sea level rises on the east coast of the US,” he said.

Rahmstorf and scientists from Maynooth University in Ireland and University College London in the UK concluded that the current weakening had not been seen over at least the last 1,000 years, after studying sediments, Greenland ice cores and other proxy data that revealed past weather patterns over that time.
The AMOC has only been measured directly since 2004.

The AMOC is one of the world’s biggest ocean circulation systems, carrying warm surface water from the Gulf of Mexico towards the north Atlantic, where it cools and becomes saltier until it sinks north of Iceland, which in turn pulls more warm water from the Caribbean.
This circulation is accompanied by winds that also help to bring mild and wet weather to Ireland, the UK and other parts of western Europe. 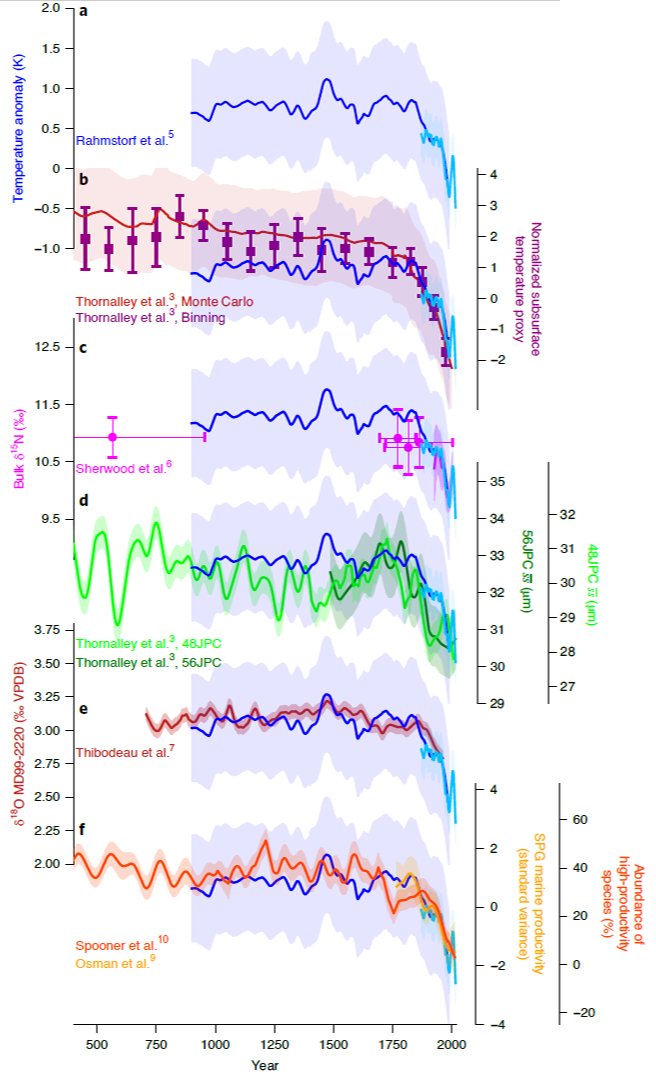 These data consistently show an AMOC decline in the 20th Century, with the weakest AMOC state of the whole series in the last decades.
Scientists have long predicted a weakening of the AMOC as a result of global heating, and have raised concerns that it could collapse altogether.
The new study found that any such point was likely to be decades away, but that continued high greenhouse gas emissions would bring it closer.

Rahmstorf said: “We risk triggering [a tipping point] in this century, and the circulation would spin down within the next century.
It is extremely unlikely that we have already triggered it, but if we do not stop global warming, it is increasingly likely that we will trigger it.
“The consequences of this are so massive that even a 10% chance of triggering a breakdown would be an unacceptable risk.”

The AMOC is a large part of the Gulf Stream, often described as the “conveyor belt” that brings warm water from the equator.
But the bigger weather system would not break down entirely if the ocean circulation became unstable, because winds also play a key role.
The circulation has broken down before, in different circumstances, for instance at the end of the last ice age.

The Gulf Stream is separate from the jet stream that has helped to bring extreme weather to the northern hemisphere in recent weeks, though like the jet stream it is also affected by the rising temperatures in the Arctic.
Normally, the very cold temperatures over the Arctic create a polar vortex that keeps a steady jet stream of air currents keeping that cold air in place.
But higher temperatures over the Arctic have resulted in a weak and wandering jet stream, which has helped cold weather to spread much further south in some cases, while bringing warmer weather further north in others, contributing to the extremes in weather seen in the UK, Europe and the US in recent weeks.

As well as causing more extreme weather across Europe and the east coast of the US, the weakening of the AMOC could have severe consequences for Atlantic marine ecosystems, disrupting fish populations and other marine life.

Andrew Meijers, the deputy science leader of polar oceans at British Antarctic Survey, who was not involved in the study, said: “The AMOC has a profound influence on global climate, particularly in North America and Europe, so this evidence of an ongoing weakening of the circulation is critical new evidence for the interpretation of future projections of regional and global climate.

“The AMOC is frequently modelled as having a tipping point below some circulation strength, a point at which the relatively stable overturning circulation becomes unstable or even collapses.
The ongoing weakening of the overturning means we risk finding that point, which would have profound and likely irreversible impacts on the climate.”

Karsten Haustein, of the Climate Services Center in Germany, also independent of the study, said the US could be at risk of stronger hurricanes as a result of the Gulf Stream’s weakening.

“While the AMOC won’t collapse any time soon, the authors warn that the current could become unstable by the end of this century if warming continues unabated,” he said.
“It has already been increasing the risk for stronger hurricanes at the US east coast due to warmer ocean waters, as well as potentially altering circulation patterns over western Europe.”

Dr Levke Caesar, of Maynooth University in Ireland, and the lead author of the paper, said sea level rises on the east coast of the US were another potential consequence.
“The northward surface flow of the AMOC leads to a deflection of water masses to the right, away from the US east coast.
This is due to Earth’s rotation that diverts moving objects such as currents to the right in the northern hemisphere and to the left in the southern hemisphere,” she said.
“As the current slows down, this effect weakens and more water can pile up at the US east coast, leading to an enhanced sea level rise.”