How AI is identifying illegal trawlers in Africa

A buoy fitted with a trackable transponder collects fishing data off the coast of West Africa.
(Image: © Tommy Trenchard /Greenpeace)

From ChinaDialogue by Todd Woody

Africa is a hotspot for illegal fishing by foreign fleets, and now for the first time, researchers have pinpointed where that illicit activity is happening around the entire continent – and identified the culprits.

Based on their map, which uses satellite technology to track boats’ movement and artificial intelligence to interpret it, researchers at Global Fishing Watch have singled out industrial trawlers operating unlawfully in inshore waters reserved for small-scale “artisanal” fishers.

Their findings show these big, foreign ships are targeting certain countries.
For instance, 93% of industrial fishing in Somalia between 2012 and 2016 occurred in a banned area – a zone stretching 24 nautical miles from the shore that had been set aside for small, local fishing boats.

All those industrial trawlers were flying South Korea’s flag, according to a new paper documenting the research.
Other large vessels most often making incursions into the inshore waters of African countries were flagged to the European Union (Greece and Spain) and China.

With the World Trade Organisation (WTO) missing a deadline in December to reach an agreement banning subsidies that fuel such industrial fishing, the technology could give African officials and other regulators an important tool to combat the marine crime that robs their citizens of food, livelihoods, and in some cases, their lives.

This map tracks commercial fishing vessels at sea in near real-time.
Blue dots indicate the presence of fishing vessels detected using AIS data, and yellow dots indicate vessels detected using Panama’s vessel tracking data.
The timeline at the bottom shows the total number of fishing hours over any given period.
Click play to follow fishing activity over the past 8 years, and hover over/tap any part of the map to reveal more information.

Blue dots indicate the presence of fishing vessels detected using AIS data, and yellow dots indicate vessels detected using Panama’s vessel tracking data.
The timeline at the bottom shows the total number of fishing hours over any given period.
Click play to follow fishing activity over the past 8 years, and hover over/tap any part of the map to reveal more information.


“People are getting poorer,” says Dyhia Belhabib, the lead author of the paper and the principal fisheries investigator at non-profit Ecotrust Canada.
“Every year, 300,000 jobs are lost to illegal fishing.”

She noted that overseas fleets often target small foraging fish that are a staple of some African diets.
“The very fish that are caught to feed farmed salmon in the West are eaten by people in Africa, and often it’s their only source of protein.”

Belhabib’s research has also found that collisions between small fishing boats and industrial trawlers illegally operating in nearshore waters has resulted in the deaths of hundreds of African fishers.
“We hope countries will use this data to hold their own fleets accountable, whether we’re talking about China or Europe,” she says.

How does the system work?

The International Maritime Organisation requires vessels of a certain size to carry a transponder that broadcasts their live location to satellites.
This Automated Identification System (AIS) is designed to help ships avoid collisions.
Global Fishing Watch taps this and other location data to identify and track fishing boats across the globe, then analyses their movements to determine if they’re acting suspiciously.

“This is the first time we’ve looked at likely illegal activity around an entire continent,” says David Kroodsma, director of research and innovation at Global Fishing Watch.
“The thing I like about this study is that it’s part ‘Big Data’ and part really detailed policy research.
When you combine those things you can say something really useful.”

Belhabib and her colleagues reviewed laws and regulations governing inshore fishing in 33 African nations that border the Atlantic and Indian oceans, identifying zones where foreign industrial trawlers were partially or completely banned.

Then, to determine country of origin, Global Fishing Watch compared the AIS vessel locations between 2012 and 2016 with official ship registries.
That accounted for 75% of the trawlers fishing in prohibited waters.
The researchers then identified the remaining 25% as industrial fishing boats using an algorithm to analyse their movements.
The algorithm, which recognises fishing behaviour, is more than 90% accurate in spotting trawlers, according to the paper.

However, the numbers were significantly higher in certain countries.
In addition to Somalia, where 93% of large-scale fishing occurred in restricted waters, 46% of such fishing was detected in Eritrea and 38% in Equatorial Guinea.

The researchers noted that those numbers may be conservative, given that trawler captains are known to turn off their AIS transponders when fishing illegally.

Why is this data needed?

Trying to ascertain who is actually profiting from illegal fishing is part of the challenge.
In Ghana, for instance, 28% of industrial fishing between 2012-16 occurred in waters where trawlers were banned.
Researchers found that 95% of those big boats were registered to Ghanaian companies.
But a 2019 China Dialogue Ocean investigation revealed that Chinese corporations are the ultimate beneficial owners of most of them.

“In our analysis, Somalia, Equatorial Guinea, Eritrea and Ghana, where vessels spend a significant amount of their time fishing in prohibited zones, have either a limited capacity to monitor their coastal waters (Somalia and Eritrea), or have limited willingness” because of relationships with foreign fleets, the researchers wrote.

“It provides further evidence for the need for ambitious fishing subsidies rules,” she says.
“A lot of IUU activity is taking place off the coast of Africa by fleets largely from developed and big developing countries.
If you have an agreement on subsidies, you’ll no longer encourage that type of activity.” 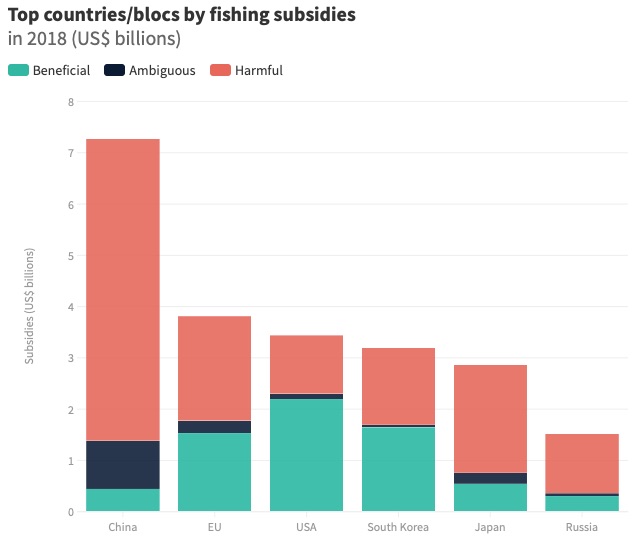 Source: A global dataset on subsidies to the fisheries sector, Data in Brief, 2019

The WTO has been negotiating the harmful fishing subsidies ban for nearly 20 years.
Jarrett attributes the failure to meet its December deadline in part to the resignation in July 2019 of the chair of the negotiations.
His successor was not chosen until November.

A new deadline has been set for June 2020, when the organisation holds its biennial ministerial conference in Kazakhstan.
The WTO operates on consensus, meaning that all 164 member states must agree on the terms of a fishing subsidies ban.

Still, Jarrett is hopeful an agreement will be struck, noting that the pressure will be mounting as the UN will be holding its second Ocean Conference in Lisbon, Portugal, the week before the WTO meeting begins.
And China, a significant player in the WTO negotiations, is hosting a high-profile meeting of the UN Convention on Biological Diversity in October, giving it further impetus to show environmental leadership by helping conclude the fishing subsidies negotiations.

The monitoring method deployed by Global Fishing Watch could also prove key in helping ensure compliance with a fishing subsidies agreement.
Kroodsma says the organisation’s maps are updated every three days but that it could be possible to detect illegal fishing in near real-time.

“It shows the real promise of this type of technology,” says Kroodsma.
“Developing countries need cheap ways to monitor their waters.”