As anticipated, Pine Island Glacier, known as PIG for short, in Antarctica has just spawned a huge iceberg. At over 300 sq km, about the size of Malta, this huge berg very quickly broke into many ‘piglet’ pieces the largest of which is dubbed B-49.
Thanks to images the Copernicus Sentinel satellite missions, two large rifts in the glacier were spotted last year and scientists have been keeping a close eye on how quickly these cracks were growing.
This animation uses 57 radar images captured by the Copernicus Sentinel-1 mission between February 2019 and February 2020 (the last frame is from yesterday, 10 February 2020) and shows just how quickly the emerging cracks grew and led to this calving event.
courtesy of ESA

From National Geographic by Madeleine Stone

Huge blocks of ice regularly shear away from Antarctica’s ice shelves, but the losses are speeding up.

On the ice-covered edge of a remote West Antarctic bay, the continent’s most imperiled glaciers threaten to redraw Earth’s coastlines.
Pine Island Glacier and its neighbor Thwaites Glacier are the gateway to a massive cache of frozen water, one that would raise global sea levels by four feet if it were all to spill into the sea.
And that gateway is shattering before our eyes.

Over the weekend, the European Space Agency’s Sentinel satellites spotted a significant breakup, or calving event, underway on Pine Island Glacier’s floating ice shelf.
A series of rifts that satellites have been monitoring since early 2019 grew rapidly last week.
By Sunday, a 120 square-mile chunk of ice—a little under three San Franciscos in size—had broken off the glacier’s front.
It quickly shattered into a constellation of smaller icebergs, the largest of which was big enough to earn itself a name: B-49.

This image shows two cracks in the Pine Island Glacier seen by the Copernicus Sentinel-2 satellite on September 14, 2019.
courtesey : ESA

For Pine Island, it’s the latest in a string of dramatic calving events that scientists fear may be the prelude to an even larger disintegration as climate change thaws the frozen continent.
With temperatures on the Antarctic Peninsula spiking to a record 65 degrees Fahrenheit last week, the signs of rapid transformation are becoming difficult to ignore.

“What is unsettling is that the daily data stream [from satellites] reveals the dramatic pace at which climate is redefining the face of Antarctica,” said Mark Drinkwater, senior scientist and cryosphere specialist at the European Space Agency, in a press release.

Glaciers are frozen rivers that channel larger, land-bound ice sheets into the ocean.
Pine Island is Antarctica’s most vulnerable.
Since 2012, the glacier has been shedding 58 billion tons of ice a year, making the biggest single contribution to global sea level rise of any ice stream on the planet.

The latest calving event is the eighth of the past century for Pine Island, with prior calvings occurring in 2001, 2007, 2011, 2013, 2015, 2017, and 2018, according to Copernicus.
The intervals between the events seem to be getting shorter, another symptom of the glacier’s unhealthy state.

“The events of the past five to 10 years seem to be exceptional for the area compared to the retreat in the past 70 years,” Bert Wouters, a satellite remote sensing expert at TU Delft in the Netherlands who has been monitoring Pine Island Glacier closely, writes in an email.

“Although iceberg ‘calving’ from floating Antarctic ice shelves is a natural, ongoing process, the recent calving event of Pine Island Glacier was particularly large and such calving events from this glacier appear to be becoming more frequent,” says Alison Banwell, a glaciologist at CIRES, University of Colorado, Boulder. 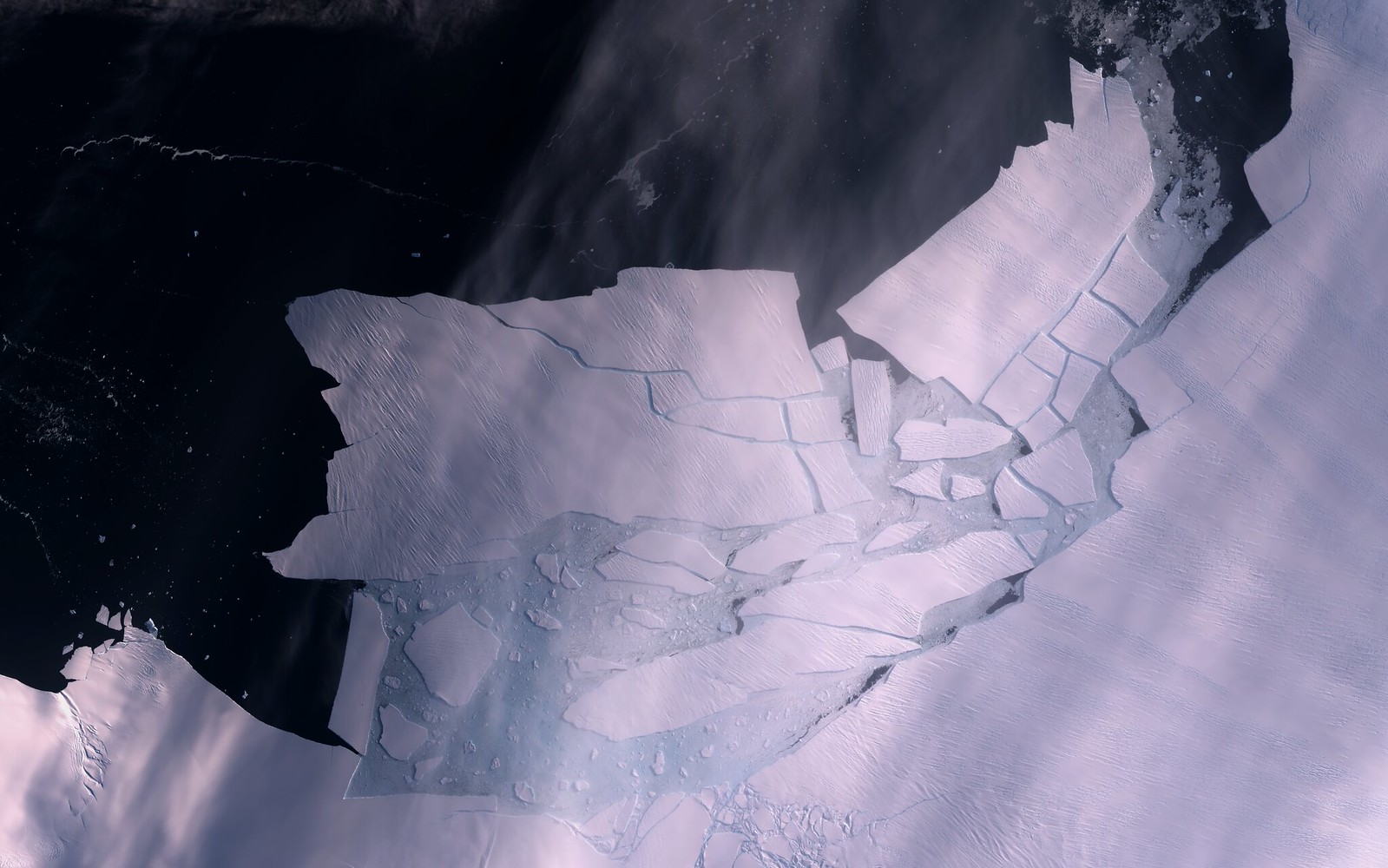 The recent breakup, which was bigger than those in 2017 and 2018 but smaller than iceberg calvings in the early 2000s, according to Wouters, might have been partly driven by mild weather last winter.

But as with other recent calvings at Pine Island and other West Antarctic glaciers, the primary driver was the influx of warm subsurface water into the Amundsen Sea Embayment, which is causing ice to melt from below.
That, in turn, is related to shifting wind patterns that are pushing warm, deep ocean water onto the continental shelf.
It’s also in line with the bigger picture of climate change.

Calving events like this don’t contribute to sea level rise directly, because floating ice shelves are already displacing water.
However, outlet glaciers like Pine Island act as a brake on the flow of land-bound ice, which does raise sea levels as it empties into the sea.
As Pine Island’s ice shelf weakens, so does this buttressing force, which can hasten the flow of ice from the land.

Indeed, Pine Island’s ice has been flowing out to sea faster since the 1990s, with the ice stream now moving at a rate exceeding 35 feet per day, according to Drinkwater.
In the lead-up to its recent calving, the glacier was moving even more rapidly than usual.

Worryingly, some scientists believe Pine Island Glacier, and its neighbor Thwaites, which also empties into Pine Island Bay, are inherently unstable due to a quirk of geometry.
The so-called grounding line where the glaciers make contact with bedrock lies below sea level, meaning it’s vulnerable to attack by warm ocean water.
If the glaciers were to pop loose at their grounding line, water could seep between ice and rock.

Because the bedrock slopes downward as one travels inland, this could result in an increasingly thick, unstable ice shelf that produces bigger and bigger icebergs, ultimately leading to runaway collapse.
Ominously known as marine ice cliff instability, this scenario has the potential to trigger rapid losses of ice across West Antarctica. 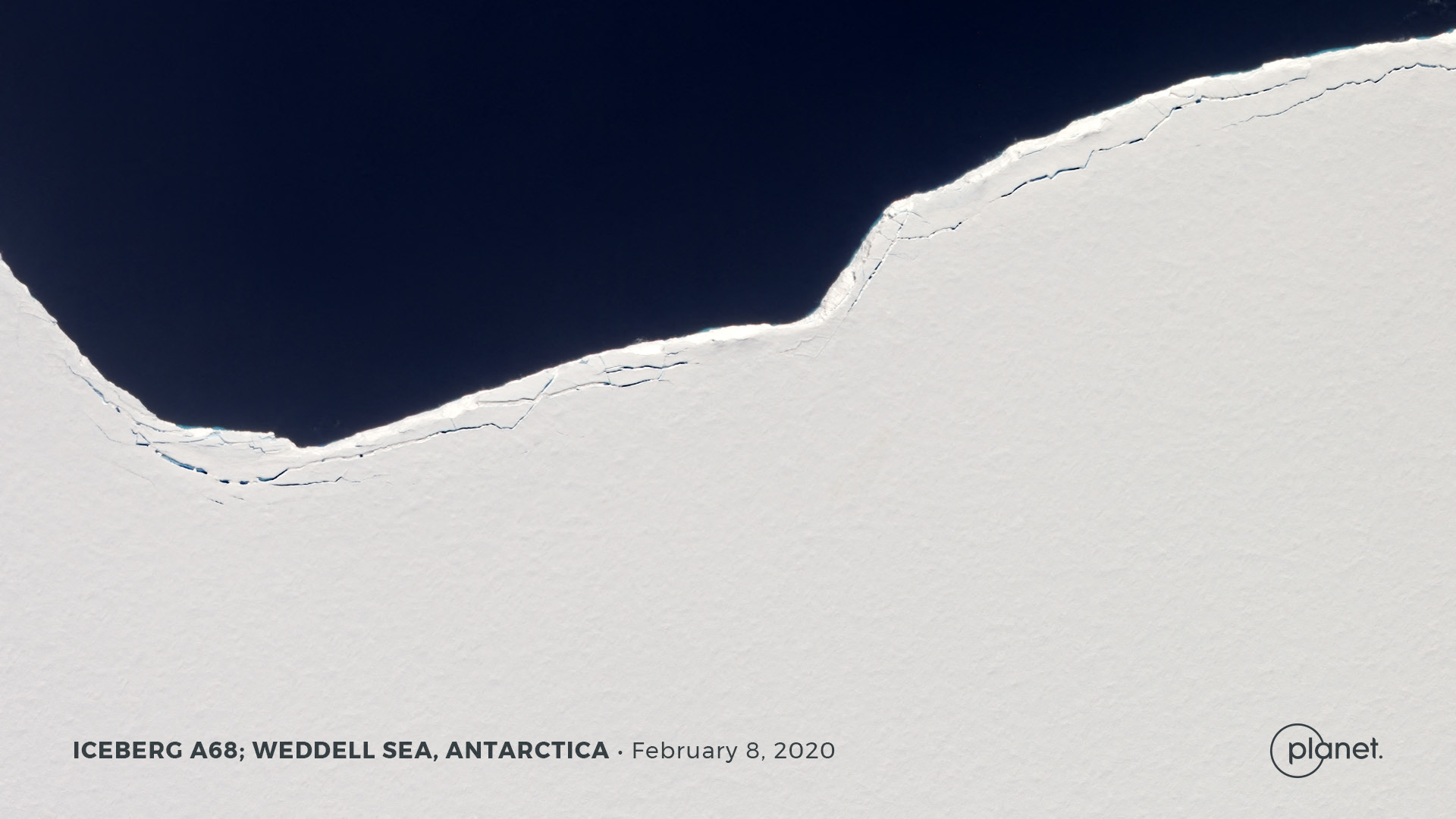 Other iceberg A68, in the Weddell Sea 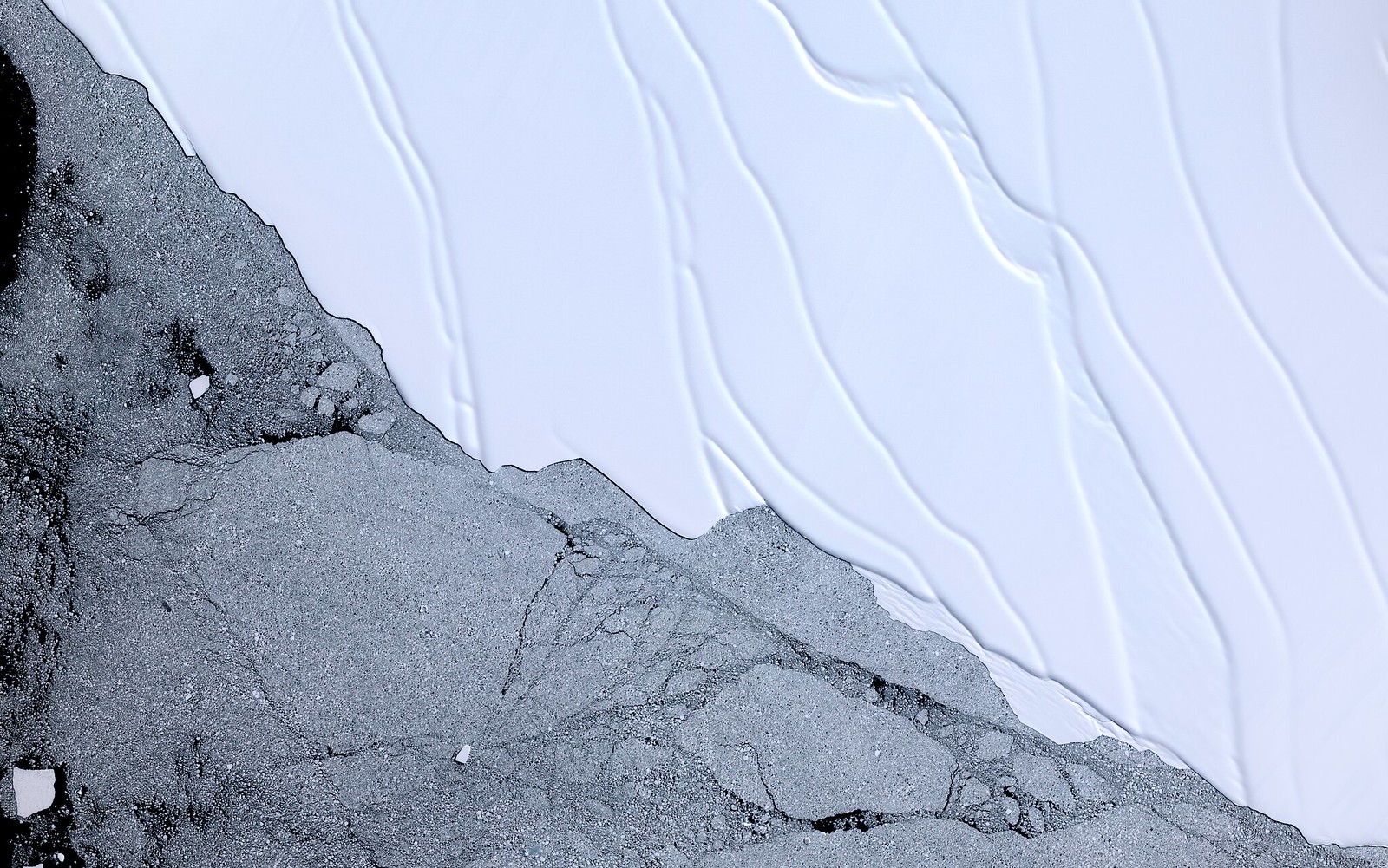 The scenario is glaciological nightmare-fuel, but the jury is still out on how likely it is.
In the hopes of finding answers, scientists with the International Thwaites Glacier Collaboration recently used a hot water drill to bore a hole through hundreds of feet of ice in order to access Thwaites’ grounding zone.

A series of instruments, including a small, tube-shaped robot called Icefin, were deployed to collect data and capture the very first footage of this mysterious realm.
This data will help fill in key gaps in scientists’ understanding of grounding zone melt dynamics, allowing them to better predict future changes, including the likelihood of runaway collapse.

Meanwhile, Pine Island Glacier seems to have stabilized for now.
The latest returns from the MODIS instrument on NASA’s Terra satellite suggest the western portion of the recently calved ice, including the largest iceberg, has rapidly rotated out into Pine Island Bay, according to NASA glaciologist Christopher Shuman.
The eastern half, including many smaller shards of ice, is following suit.

Shuman says that the breakup of Pine Island’s latest iceberg into many small shards “suggests just how ‘weak’ the floating ice tongue of [Pine Island] has become.” That, combined with the ice front’s current, seemingly unstable configuration, suggests that there will be more disintegration soon.

“All in all, not good news for the inland ice flowing out from Pine Island Glacier,” Shuman says.
Drinkwater of Copernicus agrees.
“The event will undoubtedly evolve,” he says.