From The WashingtonPost by Andrew Freedman with contribution of Matthew Cappucci

Storm could rival the most powerful nontropical lows recorded in this region.

A massive storm is rapidly intensifying in the North Atlantic, and Mother Nature is pushing her limits with it coming within striking distance of the strongest storm on record in that tempestuous part of the world. 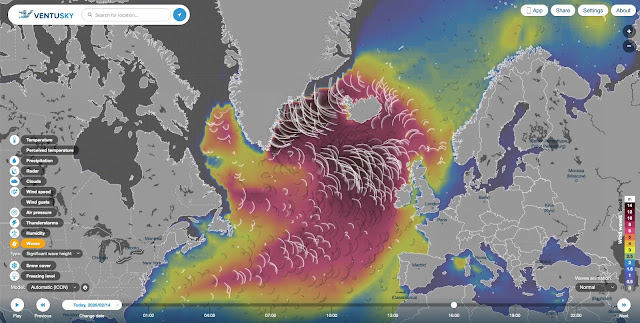 Seen via satellite, the storm, which the U.K. Met Office is referring to as Storm Dennis since it will sideswipe that region over the weekend, resembles a giant comma drawn across a vast area of real estate.
Its clouds stretch from south of Iceland all the way into the Caribbean.
At its peak, the storm may extend for 5,000 miles, with a cold front’s tentacles extending from near Florida all the way near the center of the beastly storm northwest of Scotland.

Easy to argue this is the strongest storm on the planet right now ... a tempest over the North Atlantic with hurricane force winds and towering waves ... some individual heights likely near 100ft pic.twitter.com/2RfnareIX6
— Greg Postel (@GregPostel) February 13, 2020

As of midday, the storm was still strengthening, undergoing a rapid intensification process known as bombogenesis.
Computer models show a rare scenario playing out, with the storm maxing out at an intensity of 915 millibars, which would be just 2 millibars shy of the all-time North Atlantic record, set by the Braer Storm of 1993.
In general, the lower the air pressure, the stronger the storm.

Such an air pressure reading would be more than five standard deviations from the norm, and would place the storm in the top 10 list of the strongest North Atlantic nontropical storms on record.

The weather system is being aided by a powerhouse jet stream that is roaring across the North Atlantic, and may peak at around 240 mph by Friday or Saturday.
This could cause some transatlantic flights to challenge the record flight time set just last weekend by a British Airways 747-400, which flew the route from New York’s Kennedy Airport to London Heathrow in just 4 hours and 46 minutes.

The jet stream — a highway of air around 30,000 feet above the surface that helps steer storm systems — is the result of strong air pressure differences between Arctic low pressure and high pressure areas to the south.
It is helping to invigorate storm systems as they move off the coast of the United States and into the North Atlantic.

According to the National Weather Service’s Ocean Prediction Center, the storm’s minimum central air pressure had plunged to 940 millibars as of 8 a.m. Eastern time.
A satellite with a sensor that can detect wave heights and wind speeds at the Earth’s surface passed over the storm Thursday morning and found significant wave heights of up to 51 feet.
Since that metric is defined as the average of the highest one-third of waves in a particular period, this indicates that individual waves may be about twice as tall, up to a staggering and ship-sinking 100 feet.

Rapidly intensifying storm over the North Atlantic on Thursday.
(RAMMB/CIRA)

The OPC’s forecast for the storm calls for it to pack sustained winds of up to 100 mph, along with “phenomenal seas” when it reaches peak intensity sometime between Friday and Saturday.

To qualify as a bomb cyclone, a nontropical storm needs to intensify by at least 24 millibars in 24 hours.
This particular low pressure area saw its pressure plummet at nearly twice that rate, deepening by 46 millibars in 24 hours, with further rapid intensification in the forecast.
Over a longer time period, the storm’s minimum pressure has dropped by 65 millibars in 36 hours. 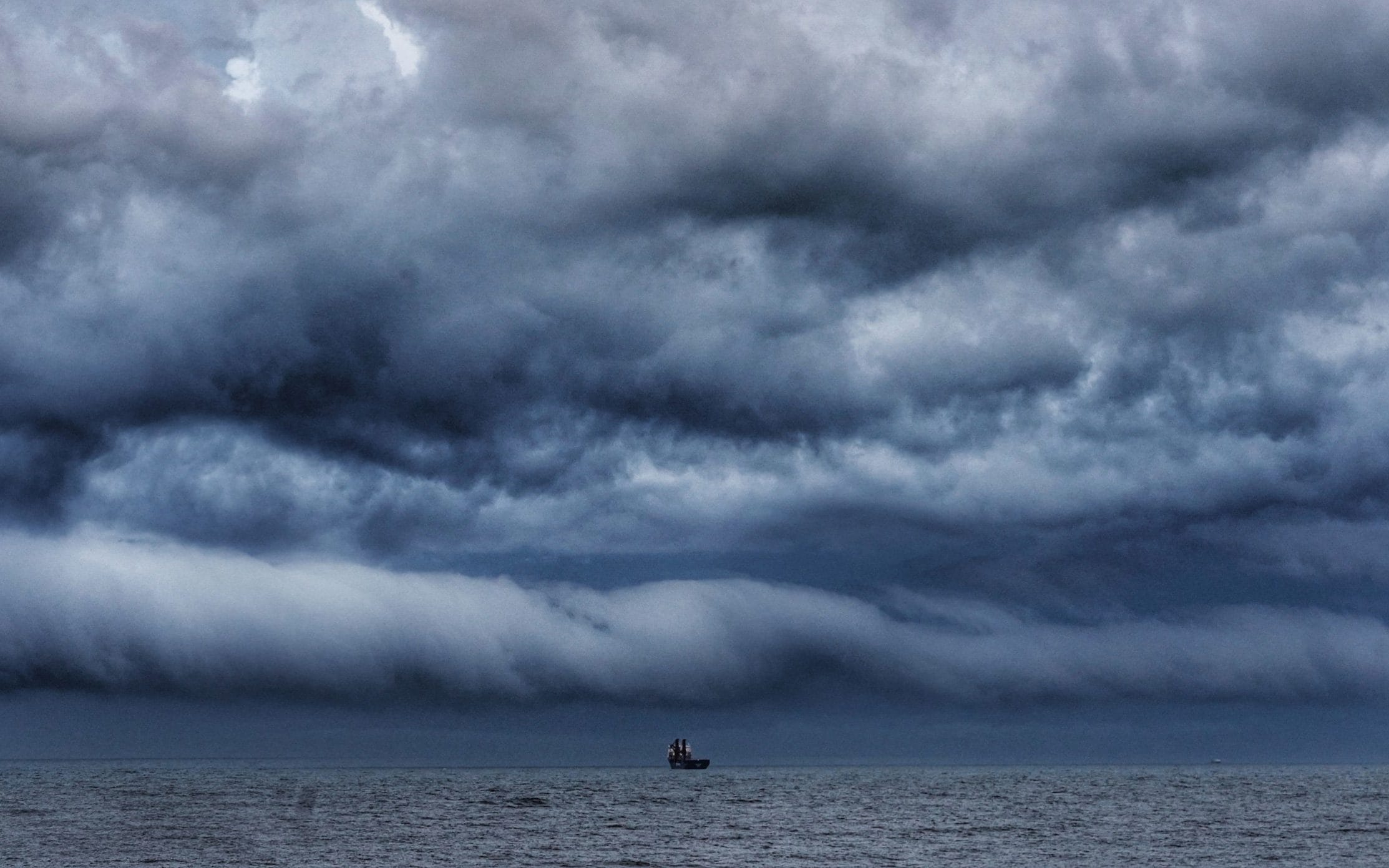 In the U.K., which just experienced deadly impacts from Storm Ciara, weather forecasters have issued amber warnings for heavy rain from Storm Dennis, noting the potential for several inches of rain to fall, along with damaging winds. Flood warnings are already in effect, given the one-two punch from Ciara.

Winds are forecast to gust past 50 to 60 mph in many areas this weekend, the Met Office said. Fortunately, the center of the storm is forecast to remain far enough to the northwest to spare even Scotland from the strongest winds, though gusts at hurricane force (74 mph) are likely there. Pounding surf and possible coastal flooding is also possible, given the huge swells generated by this weather system.

The storm’s impacts will also sweep into other parts of northwest Europe, including Denmark, Germany and Norway.

Iceland will be closer to the northern core of this storm as well as another intense low pressure area that’s already swirling around the North Atlantic near Greenland, with the most severe impacts hitting Friday into Friday night.

Storm Dennis is actually going to merge with that other storm after doing a unique meteorological dance, known as the Fujiwhara Effect, and the impacts of this interaction could be severe in Iceland.
That country’s weather agency issued orange and red alerts for sustained winds of greater than hurricane force and whiteout conditions in some locations, calling for heavy snow and sleet to fall across the entire country, with the greatest accumulations in mountain areas.

Downtown Reykjavik could see sustained winds in excess of 70 mph, the Icelandic Meteorological Office warned.
A forecast note issued Thursday warns of “violent easterly winds” through Friday in southern parts of Iceland, for example.
The aviation forecast for Keflavik International Airport calls for sustained winds of 71 mph with gusts to 92 mph Friday, which would be strong enough to halt all flights.

Very few of these storms typically see their minimum central air pressure drop to 930 millibars or lower; yet assuming Storm Dennis does so, this will have happened twice in the past 10 days.
The storm east of Greenland, which helped propel Ciara into Europe, over the weekend accomplished this feat as well.

The strong near-zonal — or straight west-to-east — jet stream is characteristic of periods when a weather pattern above the North Atlantic, known as the Arctic Oscillation (AO), is in a what is known as a positive state, with low pressure predominating near Greenland and a ridge of high pressure in the northeastern Atlantic.
On Monday, the AO set a daily record for its most positive reading since such record-keeping began.

The AO is one of the main reasons winter has been absent in much of the eastern U.S. and parts of Europe, and it’s helping to turn the North Atlantic into a virtual bomb cyclone express lane.

In addition to the deaths and damage from Ciara, the winter’s North Atlantic storms have also affected the North America.
Last month, for example, Newfoundland and Labrador were buried by one of their worst blizzards on record when a storm underwent rapid intensification and piled snow up to the second to third stories of buildings in downtown St. John’s.

This storm isn't going to stop us from having a great weekend... ;-)